How entrepreneurs are designing a trans-inclusive future through clothing

Clothing is an important way individuals—both cisgender and transgender alike—communicate their gender to society. Clothing can hint at how people might like to be addressed and what their interests are.

Some trans people say they use clothing as a political statement and to disrupt gender stereotypes. But, at its core, clothing can be a way for trans people to feel like their most confident, genuine selves — as it is for many cisgender people.

However, few companies design their products with trans consumers in mind.

Trans-inclusive apparel has been dismissed as too “niche” for larger, established companies, according to NiK Kacy, who traveled throughout Europe speaking to shoe designers before launching their own company NiK Kacy Footwear that makes smaller-sized masculine dress shoes. 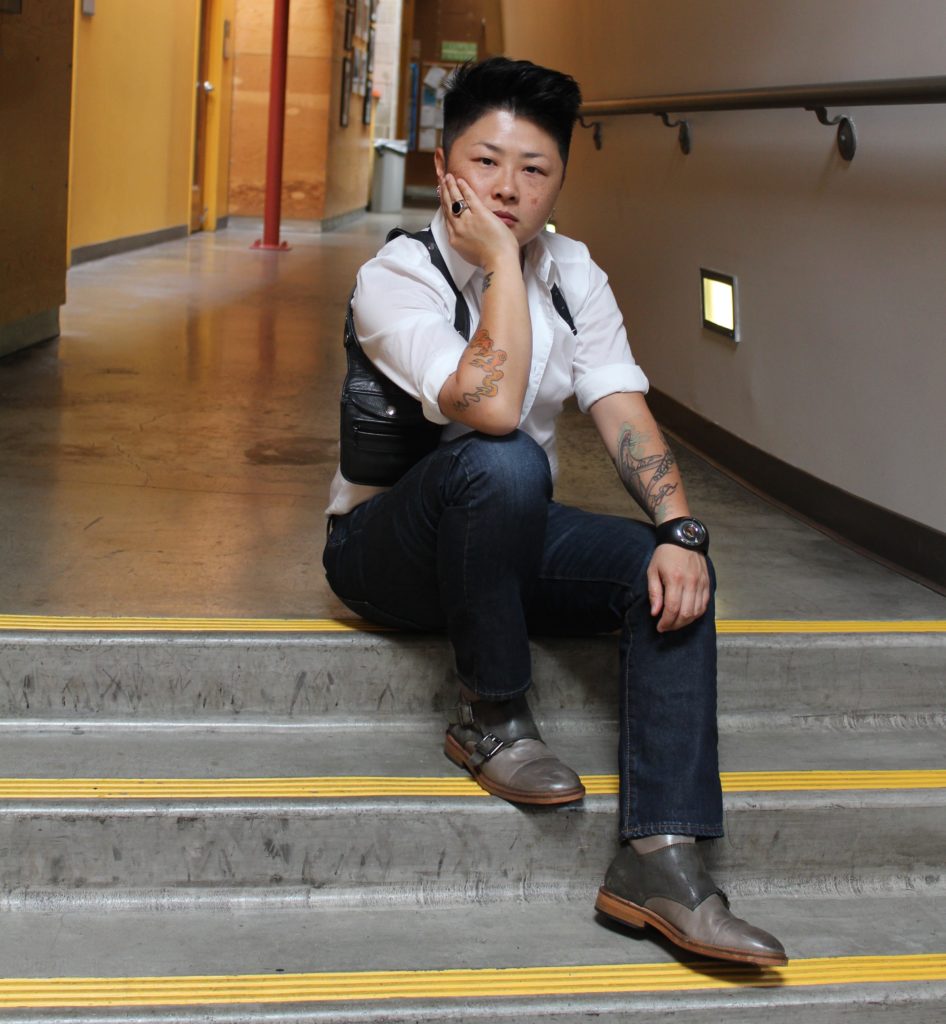 That’s why more entrepreneurs like Kacy have started companies that sell and design apparel like chest binders, shoes and dresses with trans consumers in mind.

“The predominant response that I’ve had has been–they’ve waited their whole lives for this,” Kacy said.

The need for transgender-inclusive clothing

Clothing can be a way for some trans people to address their gender dysphoria, described by the American Psychiatric Association as a “conflict” between a person’s assigned gender at birth and the gender with which they identify.

Elliot Ayres, a transgender man who works as a program coordinator at The Association of LGBTQ Journalists described his experience with gender dysphoria as alternating between “wanting to tear off” his skin and frustration that “people weren’t seeing what I really needed them to see.”

“Someone said it’s like you can see a home but there’s a fence around it.” he said. “And you know that as close as you can get, you can never reach it or you can never get inside.”

Clothing can be used to affirm transgender people’s gender identity.

Alternatively, clothing can be used to affirm transgender people’s gender identity. Andrew Reilly, a professor at the University of Hawaii at Manoa, who researches fashion and gender, notes that clothing tends to be used to hide, reveal or shape certain parts of the body.

Elliot Richardson, who is non-binary and works as a legislative analyst, often has trouble finding masculine shirts and pants that fit them well. Many of the standard “men’s” shirts do not fit them well in the shoulders and chest area. Another issue is that their body is “plush”–a body type that they say men’s clothing does not tend to accommodate. But, when Richardson is able to find a shirt that “hits all the right angles,” they feel “affirmed” in their gender, as opposed to dysphoric.

“It’s like a warm, glittery feeling. It’s very comfortable,” Richardson said. “It’s like going inside after a cold day to a hot, warm beverage. Like a lot of it is also like a feeling of relief.”

For trans people, the impact of clothing choice is very real–getting fired is one potential consequence of openly expressing their gender identity.

In 2013, Aimee Stephens was fired from her job for refusing to comply with the company’s masculine dress code required for people assigned male at birth. Stephens is a transgender woman. Her case is being heard by the U.S. Supreme Court this year, but, at least for now in the United States, people can be legally fired in 26 states for being transgender.

How entrepreneurs are addressing the need

Some designers are producing collections that specifically showcase transgender models.

Others are stepping up to design and sell apparel for trans consumers.

For many of these entrepreneurs, their products and businesses were inspired by personal need.

Marli Washington, founder and CEO of gc2b, first sketched prototypes of a chest binder in 2013 as a college student. Initially, he created the cloth device for personal use. But, over time, he realized there was a broader need. Since 2014, gc2b has sold about 400,000 binders.

The chest binders Washington designed are longer than a sports bra and serve a markedly different purpose. They’re a revision of the compression tank tops originally meant for cisgender men looking to slim down their torso or mask the condition of gynecomastia.

Cropped a few inches above the navel, the binders are used to compress the chest area to hide or de-accentuate the user’s bust. Some trans people feel dysphoric or uncomfortable with their bust being visible, and flattening it provides some relief.

Many customers have posted photos online of them wearing the binders for the first time. Some are visibly crying out of happiness.

The Austin-based company FLAVNT (pronounced flaunt) has produced its own line of binders since 2016. 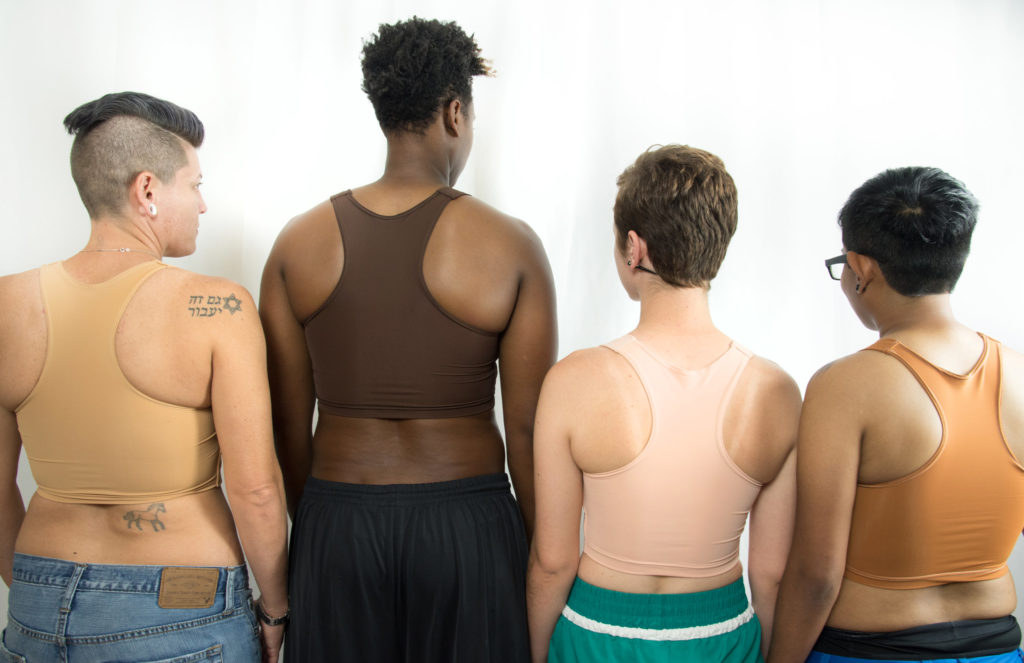 Chris Rhodes founded FLAVNT in 2013 with his identical twin sister Courtney Rhodes. Chris had tried other binders, on the market as a consumer before designing his own. And it was the Texas heat that inspired him to make razorback binders with thinner straps, allowing for a “higher range of motion” and for it to be worn underneath a tank top.

Both Washington and Rhodes agree that binders are a much safer tool than alternatives some trans people were using before, which include wrapping their chest with ACE bandages.

“Basically, if you give the user the option to tighten it themselves, then they’re probably gonna go overboard thinking that they can achieve a flatter look if they do that. So there’s been a lot of cases of like bruised or cracked ribs,” Washington said.

For Washington, not giving customers the option to tighten their binders was a “conscious design decision” to prevent physical injury and promote safety.

Melissa Atkinson was studying fashion design at Kent State University, when she created her first clothing collection with trans women and trans feminine people in mind.

Now the founder, designer, talent booker and seamstress of Trans* Clothing Company, Atkinson says she was first inspired to make the collection when a close friend came out to her as trans feminine. But, her peers at school were “confused” by her project’s focus.

“Everybody’s like why just trans people–why not cis women too?” Atkinson said. “They were confused about why just trans women, when it’s such a small population of the country. But they need to be catered to as well.”

By March of this year, Atkinson had her first fashion show and various items available for sale on her website. Her line includes sheer flowy pants, slim-fitting dresses and tri-colored sports bras. 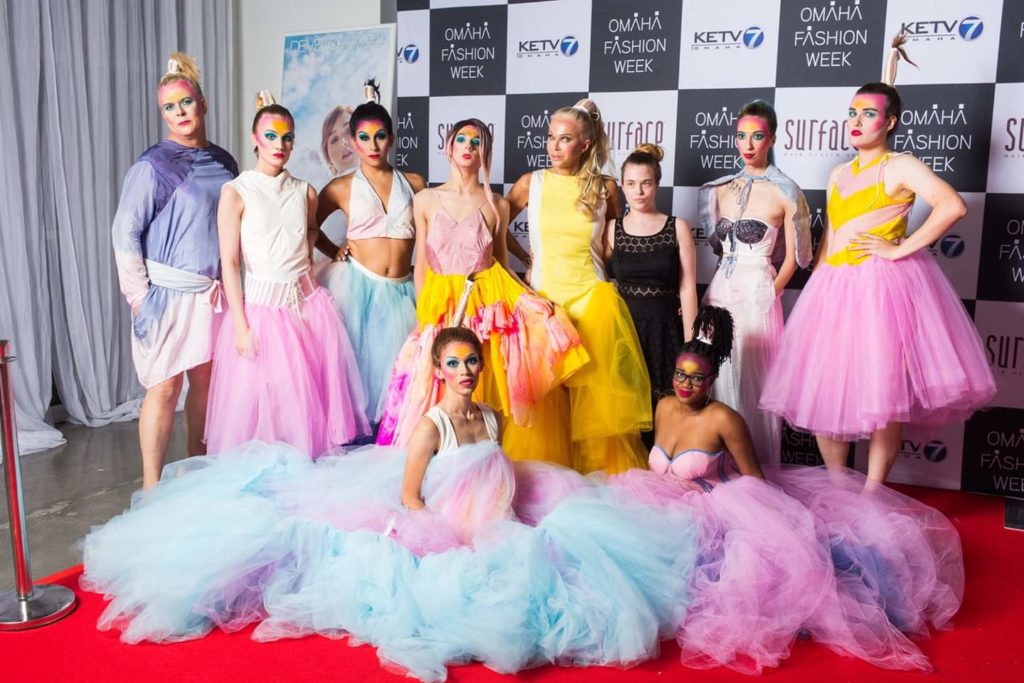 Melissa Atkinson and the models from her show in the Omaha Fashion Week.

Of course, trans people’s bodies are as diverse and wide ranging as cis people’s bodies. But, Atkinson notes that there are distinct “fit issues” that the fashion community may need to consider when creating clothing for trans consumers.

“There’s certain things in transition that will not change like hand size and arm length and proportions of the torso,” she said.

Some trans people may still want to have the appearance of a bust or a wider hips–whether or not they have the desire or access to medically transition–so Atkinson takes that into consideration when designing clothes.
Atkinson says she uses design techniques to create the “illusion” of wider hips or a fuller chest. For the former, she tends to use “bigger skirts” and for the latter, she provides foam padding or removable cups that lay “completely flat” against the skin.

While Atkinson’s collection has solely focused on femininity, she plans to debut masculine, feminine and even gender neutral stylings next year.

Henry Bae was working in the fashion industry as a women’s shoe buyer when, every once in a while, a larger sized pair of heels would come into the office. Bae would try them on as a “joke” in front of his women coworkers and it was largely treated as a spectacle. In general, Bae says that the few feminine shoes made in larger sizes are typically intended for performers, particularly drag queens.

The lack of feminine shoes in larger sizes prompted Bae and his friend Shaobo Han to launch their own Brooklyn-based shoe company, SYRO, with a focus on everyday footwear. Bae and Han said they wanted their collection of larger-sized, high-heeled boots to be worn for everyday use like “to the grocery store, to the office.” 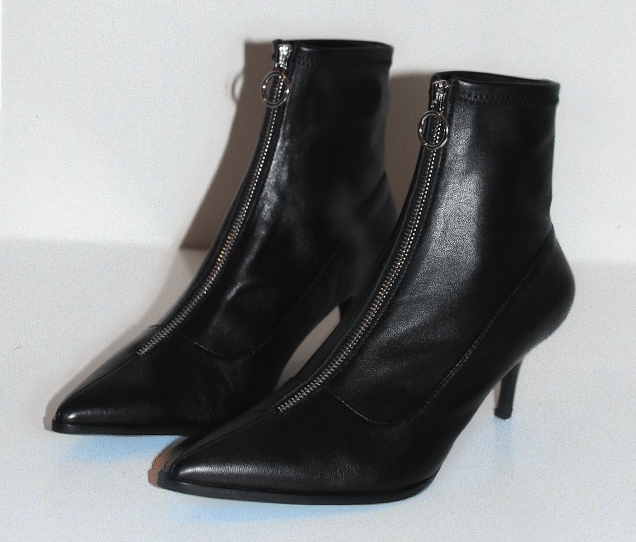 Bae and Han are still working to find the right mix of sensible and stylish– some of their customers complain that the shoes are a “little bit too practical and boring.” But Bae said that the company plans to expand their catalogue to include more traditionally feminine shoes for trans women who are just trying to “get through society without being confronted by strangers that are questioning their transness and identity everyday.”

Han, who is genderqueer, and Bae, who is gender nonconforming, say they have both been harassed for wearing feminine apparel in public. (The duo says that their own personal styles “flirt between androgyny.”) 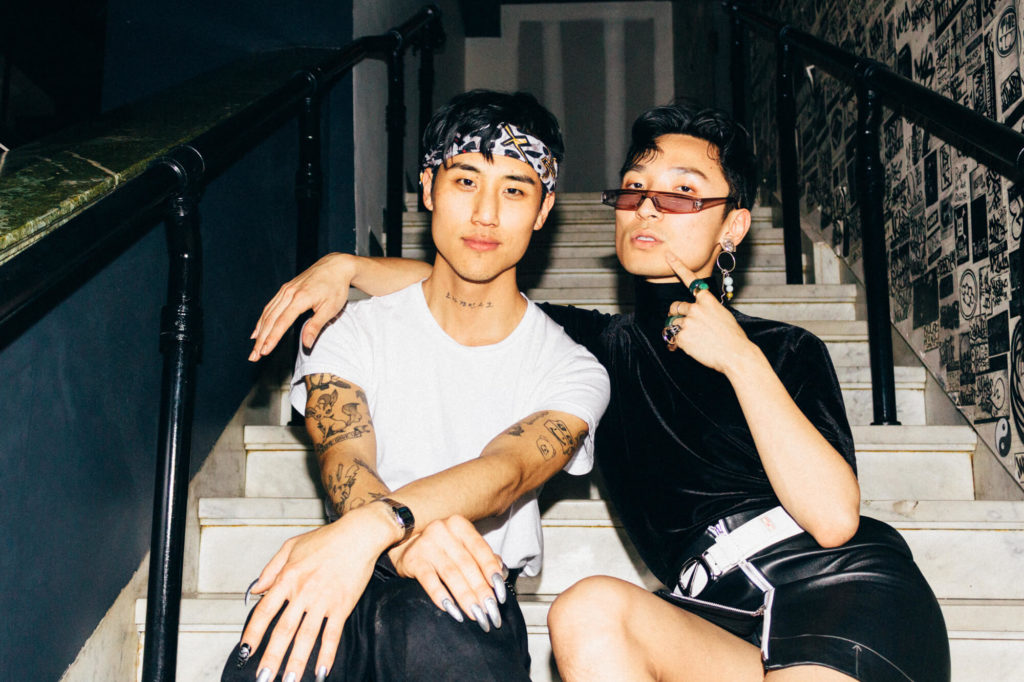 Other entrepreneurs are starting to offer masculine style shoes in smaller sizes. Lauren Craig, who is a cisgender woman, founded the Toronto-based Tomboy Toes, because she couldn’t find the “perfect pair” of masculine dress shoes.

“Not only could I not find a pair of shoes that I wanted,” Craig said. “When I pointed at like a really handsome pair of men’s dress shoes and said, ‘What are the odds you carry this in a women’s seven and a half?’ They looked at me like I had three heads.”

While Craig is cisgender, their consumer base is more expansive than that. And marketing products to people with various gender identities can be a learning process. Craig said a trans customer once messaged her on Facebook saying that he loved her product, but that he had a “couple of concerns about the wording” of Tomboy Toes’s advertisements and website.”

Craig ended up changing the name of her most popular product–from The Dapper Woman to The Downtown Dappers. 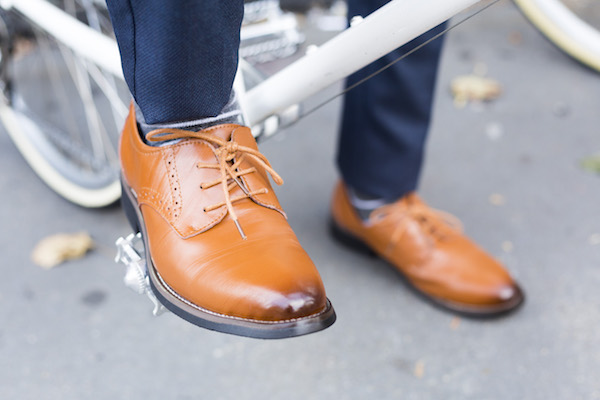 A pair of The Downtown Dappers, made by Tomboy Toes. Photo courtesy of Lauren Craig.

In Los Angeles, NiK Kacy went from producing commercials at Google to launching their own line of smaller-sized masculine dress shoes in 2015.

Kacy, who is trans masculine, had always wanted to wear men’s shoes, but said they were “constantly humiliated” and “told to go to the women’s section” at stores.

“Even back then, I didn’t really understand it. I just knew what I liked, but I could never find it in my size,” Kacy said. “In my adolescence–I was like, ‘You know one day I’m going to make these if somebody else doesn’t.’”

Like Craig, Kacy says their online customer base is “wide” and includes “cis men, cis women, trans people and gender nonconforming people.” That’s why the sizing on Kacy’s website is gender neutral and comes with an original size chart.

For Kacy, it’s one step toward their vision of a gender neutral fashion future, where clothing stores aren’t divided by gender and people have that many more options for self-expression.

Supreme Court weighs whether LGBTQ workers are protected from discrimination