Fresno, Calif. — In a sprawling section southeast of this city, heavy trucks and large warehouses are dispersed among thousands of acres of farmland, as the San Joaquin Valley has become an attractive location for large distributors and manufacturers to set up their facilities in recent years.

With agricultural fields being turned into warehouse property, and proximity to an inland highway system that connects southern and northern California, local officials say the Fresno region is a prime location for growing not just fruits and vegetables, but some of the country’s manufacturing jobs.

This has been a key selling point that Lee Ann Eager, president and CEO of the Fresno County Economic Development Corporation, has made in recent years as the organization tries to expand and improve the economic future of a region where poverty is persistent. According to U.S. Census data, Fresno County ranks near the bottom of counties in California and the nation when it comes to poverty, with a nearly 21 percent poverty rate.

In August, the U.S. Economic Development Association awarded $500 million in competitive workforce development grants to 32 agencies and organizations across the country that promote economic activity in their regions. The funds come from the American Rescue Plan’s “Good Jobs Challenge” and only two organizations were chosen in California – one of them the Fresno County Economic Development Corporation. The EDA described the grants as “once-in-a-generation investments” to “transform American communities” in the modern economy.

Eager said there has been a years-long goal to draw manufacturing and transportation jobs to the Fresno region and diversify the local economy, and the federal funds are helping. The $23 million grant to the economic development corporation is intended to expand job training in four areas: construction, business services, manufacturing and transportation. The organization stated in its grant application that the local workforce would benefit from training to gain skills such as welding, commercial truck driving, bookkeeping, math and digital literacy.

Federal money from legislation like the Infrastructure Investment and Jobs Act (IIJA) and the American Rescue Plan, both passed in 2021, is injecting new energy into industries like manufacturing and transportation across the country. Those funds often meet existing local and state grants aiming to improve job training at the local level. With federal investments reaching the San Joaquin Valley, the plan to transform the region into a destination for manufacturing and transportation jobs is getting a boost.

On a recent Thursday, a section of a large warehouse was opened as the site of the John R. Lawson Truck Driving School in south Fresno. The location is a new setting for an existing program that has already trained more than 300 truck drivers since at least 2015. With the new funding, there are hopes to double the number of students per training, Eager said.

Corina Hernandez, 32, of Fresno, is among six women taking part in the current group of 24 truck driving students at the school. She is half way into the training, but already thinks she may stick with truck driving until she retires, she told PBS NewsHour.

“I am a single mother. My son is 15, and I would say this would provide a better living for us and I would hope to be able to buy us a home one day,” Hernandez said.

Trucking is a nearly $800 billion industry and moves about 72 percent of the nation’s goods, according to data from the American Trucking Associations. But a labor shortage across the country has added stress to the industry, according to experts, and it’s estimated at least 80,000 drivers are needed to fill the current demand. On top of that, the industry faces an aging workforce, long work hours and high turnover nationally.

Eager, who is also the chair of the California Transportation Commission, said the Fresno region could see around 4,700 transportation jobs added by 2026, and she hopes most of the workforce can be found and trained locally.

Technology around powertrains is changing as the state tries to curb greenhouse gas emissions concurrent with the automotive industry gradually introducing more electric and hybridized vehicles into their fleets. This month, California announced a ban on gasoline-powered cars. And in 2020, the state passed a rule to slowly introduce more electric trucks starting in 2024.

“When those new technologies come, we will get the trucks and we’ll have those switched over to those zero-emission vehicles and [students] will train on those, too,” Eager said.

Workforce training programs may also play an important role as projects get underway through the federal infrastructure bill passed last fall. According to the National Skills Coalition, an organization that promotes skilled training, industries like construction and transportation were already facing constraints and challenges hiring workers prior to the COVID-19 pandemic. While local economies benefit from manufacturing jobs, employment in the industry has fallen in the last 40 years in the U.S. and it has struggled to recover amid recessions.

As states prepare for IIJA funds, there is an even greater opportunity and need to train workers for the new infrastructure jobs that will be created, the organization states. 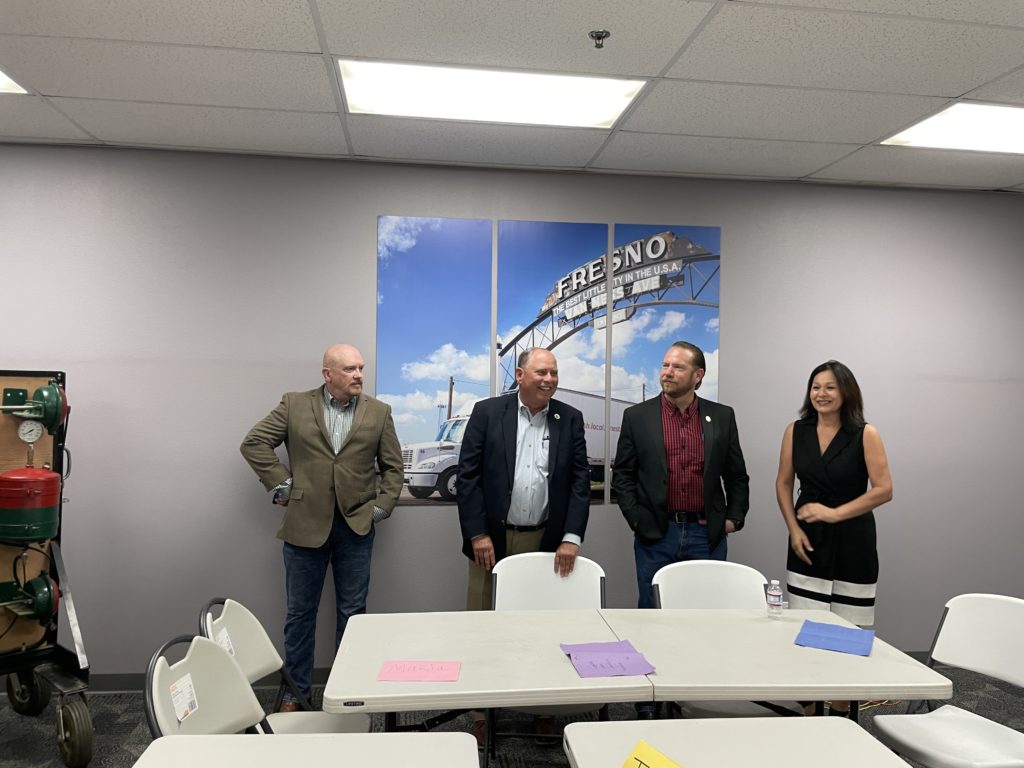 In Fresno County, Eager said the investment in such jobs could help not just the local economy, but the nation, too. The county’s economic development corporation estimates there will be 10,000 new jobs added in the four sectors funded by the EDA grant by 2026.

“Our goal is to ensure that these are jobs that are living wage jobs, that people can support their families and that have benefits attached to them,” she said.

A transportation training center at a new community college campus in west Fresno is also expected to help train the local transportation workforce, Eager said. The economic development organization partners with industry companies and agencies looking to fill jobs, including state agencies like CalTrans and the High Speed Rail Authority, overseeing the nation’s first high-speed train which will have a major station in Fresno and is scheduled to be running by 2030.

Eager added that around 40 community-based organizations are being brought into the industry training effort to find workers who don’t normally apply to these types of jobs, like women and minorities.

You’ve got residents saying ‘Hey, how can I get a job if there’s a job available?

Last year, the Fresno County Board of Supervisors approved a study to examine turning a largely agricultural 3,000-acre area into a site for industrial development in order to increase available space for prospective companies. Environmental studies are still being conducted, as pollution and noise from industries and trucking activity has been a concern for nearby residents.

Buddy Mendes, a county supervisor overseeing the district where the industrial site is being planned, said he shares a vision of the Fresno area becoming a hub for more industrial jobs. But space, and outreach, is crucial to make it happen.

Mendes acknowledges the developments around increasing industrial jobs won’t happen quickly. But the training for trucking jobs, for example, is a starting point to get people prepared, including filling jobs that are open now. He said local companies have not had sufficient truck drivers for at least the last decade.

“[Training] needs to be done regardless of whether we build out this industrial park or not,” he said. “The basic need for truck drivers is pretty great.”

The truck training program has been around since 2014 as a partnership between the economic development corporation and the Fresno County Department of Social Services. Through a “Welfare to Work” program, residents are offered training at no cost to them with the likely possibility of getting hired after they complete the course, said Maria Aguirre, deputy director of the county’s social services. 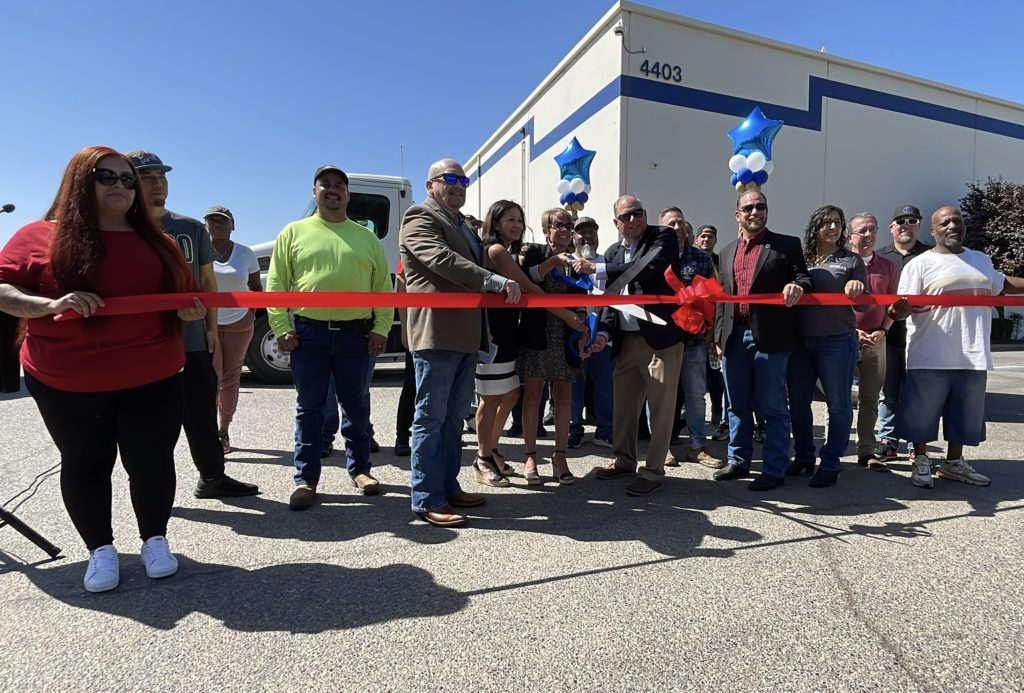 A ribbon-cutting ceremony to open a new facility for truck driver training in Fresno, California is held on Aug. 25, 2022. Photo by Cresencio Rodriguez-Delgado/PBS NewsHour

Aguirre said the training program helps people who otherwise would struggle to find steady work. She said some recipients of public benefits in the county may struggle with other issues like mental health or substance abuse, but the program aims to help them maintain training and their jobs.

The San Joaquin Valley has some of the highest unemployment rates in the country. The Fresno metropolitan area, for example, has a 5.8 percent unemployment rate, but nearby cities see rates up to 7 percent – nationally, the unemployment rate is 3.5 percent, according to the Bureau of Labor Statistics. Wages remain a top concern for many locals in their job search.

WATCH: Why Native Americans are excited about the American Rescue Plan, and their future

Before enrolling in trucking school, Hernandez was a certified nursing assistant, but she barely got by on the minimum wage the position paid. By some estimates, truck driving in California pays $23.35 an hour.

Because she gets welfare assistance through the county, Hernandez was eligible to be placed in the truck training class at no cost to her. The county’s department of social services pays for the training and any related fees, like DMV paperwork, according to Aguirre. Additionally, companies that provide on-the-job training are reimbursed for the employees’ wages by the department thanks to subsidies from available grants.

The subsidies are helpful to people like Hernandez, she said, because she otherwise could not afford to attend the training, and wouldn’t have another way to access the skills needed for trucking, much less get a job in the industry.

“In order for me to afford a class like that, I would have to put savings away for it,” Hernandez said.