For most of the 23 years Romarilyn Ralston spent in a California prison, she made 37 cents an hour, unable to afford crafty birthday cards for her two sons, let alone the financial support she desperately wanted to give them.

Ralston did clerical and recreational work at the California Institution for Women in Chino, while voluntarily training women who have recently made national headlines for being on the front lines of the state’s biggest wildfires. The state has deployed more than 15,000 people to combat fires ripping through more than 220,000 acres in recent weeks, including as many as 1,600 trained inmates who earn, at the high end, a base pay of close to $2 a day.

Ralston said her friends on the outside were shocked to hear about the low wages and the tough work, and she, as well as a woman who said she trained for the program, said it deserves much more scrutiny.

Describing dangerous, backbreaking labor — they use hoes and chainsaws to manipulate the landscape and redirect fires in their tracks — Ralston compared it to a slave-era practice.

“Prisoners are leased out and thrown down to public and private corporations for labor,” she said. “That’s part of the convict-leasing system from Reconstruction, unfortunately, and it’s shameful.”

The second clause of the 13th Amendment to abolish slavery and involuntary servitude made an exception for people convicted of crimes, allowing landowners to incriminate newly-freed slaves with arbitrary laws and rent them out for cheap labor.

Since then, prisons have relied on this labor — including cleaning, serving food, laundry, plumbing and construction — to run their facilities as well as to provide the state with other workers, including those who make license plates or pave roads.

California corrections spokesperson Bill Sessa said he did not anticipate the women would get so much attention. The female California Conservation Camp program has been intact since 1983 and 40 of the 43 camps are male.

“The men were getting all the coverage, so I just happened to mention to a reporter, ‘You know, we do have women who do this,’” Sessa said. “The fact that it’s women, the fact that it’s Malibu, it’s just got all the elements for lack of a better term, a sexy story.”

He also described the positions as coveted among inmates — the environment is nicer, the pay can be higher, the food is better and he said it can accelerate their release dates. For every day most of them are at camp and are on good behavior, they can get two days off their sentence, according to corrections. 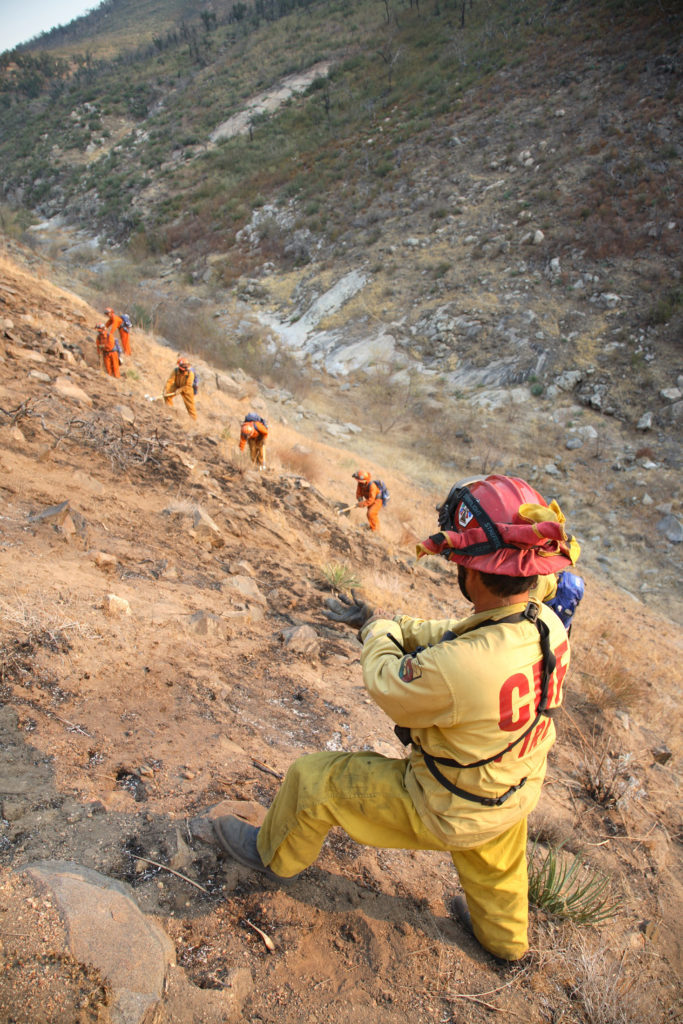 A fireman who has managed prison crews for the past seven years, watches over a team of female prisoners in a remote mountainous area of the Witch Fire past Santa Ysabel, California to build a protection line against spreading fire, October 25, 2007. Of about 9,000 firefighters battling the southern California flames, nearly 3,000 are inmates. About 300 are from all-women prisoner brigades. Picture taken October 25, 2007. Photo by Adam Tanner/Reuters

Ralston agreed that it is more humane than other prison jobs for those reasons and that plenty of people get satisfaction out of the work, but that given the history of prison labor, and the low pay for risky work, it can still be demeaning. Corrections estimates the program saves the state $124 million a year, amounting to 3 million hours of firefighting work.

“When it costs $70,000 a year to incarcerate someone, then training them to be a high-functioning state worker and fight fires and put their lives on the line,” she said. “To treat people that way is absolutely shameful.”

While Ralston was incarcerated, she was serving a life sentence, unable to stay at a camp – those spots are for people who are deemed as minimum flight risks.

“It was tough. I tried to send little birthday cards and gifts home but it’s hard to support your kids,” she said. “Even when you make things, sometimes materials are free but sometimes you want to buy materials, or order something from a catalogue because they did well in school, but you can’t afford it.”

She was sentenced to life in 1988 when her sons were 2 and 5 years old. In the 23 years she served, she had bought savings bonds that had amounted to about $500, which she retrieved upon her release in 2011. Since then, she has earned bachelor’s and master’s degrees and become a program coordinator at Project Rebound at Cal State Fullerton, a resource for incarcerated people who want access to higher education.

The director of the American Civil Liberties Union’s National Prison Project David Fathi said that not all prison jobs are inherently bad. Voluntary jobs can lower recidivism rates, provide routine and a valuable sense of worth and responsibility. But whether they are actually “voluntary” is an important nuance, he said.

“Little in prison is truly voluntary,” Fathi said. “It’s hard for most people to understand the pervasively and inherently coercive nature of the prison environment.”

While California corrections states on its fact sheet that no one is involuntarily assigned to the fire program, Ralston and Ingrid Archie disagree.

Most people in California prisons go through a classification system every year so the facility can assess where they should work based on skills, attitude, work habits and education level.

Archie, who was released about two years ago, said she was assigned to the camp without her input.

“If you refuse the program, that’s a disciplinary infraction,” she said.

She said the infraction is called “refusal to program” and that it can layer an additional 30 to 60 days onto a person’s sentence.

Ralston, who did administrative work for the fire program, said that people risk an infraction and added time if they do not cooperate.

California corrections spokesperson Terry Thornton said that there is an infraction called “refusal to program,” but that she still considers the fire program voluntary because corrections “cannot force an inmate” to comply.

Regardless, Fathi said there are clearer lines to better wages.

“State minimum wage laws don’t apply to prisoners. This is something the legislature could fix very easily. The minimum wage could apply to everyone who works,” he said. “Same with worker’s compensation laws.”

California corrections states in its fact sheet that people in the program make $2 a day, but most of them are actually making $1.45. There is a ranking system: $1.45 a day is grade 1, while “skilled and experienced” people get $1.67 a day and “a limited number of skilled inmates who have been given special assignments” get $1.95 per day.

Ralston maxed out at $56 a month as a clerk for the fire crews and Archie said she was compensated $1 a day to clean the camp.

With their earnings, they could buy items like soap or lotion, pre-made birthday cards, vitamins, allergy tablets, cough drops, or Saltine crackers. They could spend it on co-pays for health concerns, but it was never enough money to save or send it home.

Sessa says part of the appeal of the fire program is the extra pay for being in the field. In those circumstances, firefighters get an extra $1 an hour.

Given the severity of the fires in recent weeks, he said some of the crews were working up to 80 hours in a row before they could get a break.

“They can put it in special accounts which gives them a financial cushion when they go back to their home community,” he said.

But Ralston says that money is not what lures women to these jobs. Most of them, she said, risk their well-being to get out of prison faster so they can get home to their children and prove that they are “redeemable.”

The majority of women in prison have children, are victims of violence or trauma and are most often there for nonviolent offenses, as opposed to their male counterparts. While California has one of the lowest female incarceration rates, it has come under scrutiny in recent years for its failure to adequately address some of their unique mental health issues.

And even if they are making top prison dollars, the wages are still “shameful,” especially given the many obstacles women face, she said.

“A lot of women in the program are in there because they want to get to their children, but they don’t need a broke down mom when she gets home,” she said.

Left: Female prisoners working in a remote mountainous area of the Witch Fire past Santa Ysabel, California to build a protection line against spreading fire, October 25, 2007. Of about 9,000 firefighters battling the southern California flames, nearly 3,000 are inmates. The prisoners typically get two days off their sentence for each on the fire lines. About 300 are from all-women prisoner brigades. Picture taken October 25, 2007. Photo by Adam Tanner/Reuters