Alumni of the high school that Department of Homeland Security Secretary Kirstjen Nielsen attended in Florida have raised over $12,000 for immigrants in need of free and low-cost legal aid, a rebuke to the Trump administration official presiding over the family separation crisis this week.

In a letter, alumni of Berkeley Preparatory School say they would be “remiss to stay silent” as a fellow alum enforces the Trump administration’s immigration policy.

The effort took off on Facebook after Reuben Siegman, a graduate of Berkeley Preparatory School in Tampa, Florida, began following news reports of adult and migrant children being separated at the U.S.-Mexico border.

“I knew this was an issue that was a moral issue and that could transcend party lines,” Siegman told the NewsHour in an email.

Siegman reached out to Megan Magray, a fellow alum at the school—from which Nielsen graduated from in 1990—and the pair created a Facebook messenger group chat with other alumni who wanted to help reunite families and raise awareness about separations at the border.

The group formulated a plan to write an open letter to the school opposing family separation in an effort to join critics trying to “put as much pressure on Nielsen to overturn [the] policy,” said Paul Caintic, another alum who participated in the effort.

After that conference, alumni from Nielsen’s alma mater “realized [Secretary Nielsen] had just become the undeniable face of this policy, and we had to mobilize immediately,” Magray said in an email.

READ NEXT: ‘Free our children now’ — On the U.S.-Mexico border, activists protest separation of immigrant families

On Tuesday, the group published an open letter addressed to Berkeley Prep’s headmaster, Joseph W. Seivold, that begins with a reprise of school’s motto: “Berkeley puts people in the world who make a positive difference.” The letter says that alumni of the school would be “remiss to stay silent” as a Berkeley Prep graduate enforces a separation policy that is “undeniably cruel.” It ends with a three-pronged call to action for the Berkeley community: pledging money to RAICES Texas, giving “time to causes that advance the wellbeing of people across the world,” and calling on their “peer” Kirstjen Nielsen to either end family separations or resign.

They also began raising money for the Refugee and Immigrant Center for Education and Legal Services, or RAICES, to help the advocacy group pay for legal representation for immigrants, bond payment for family reunification, and training volunteer lawyers, among other services.

The organizers sent the open letter to members of their community with a GoFundMe link for donations to RAICES attached, asking recipients of their messages to pass it on. By the next morning, and before organizers publicized it on social media, the letter had earned 175 signatures. From there, it “grew with the power of social media,” Eli Siegman, who graduated this year, said in an email. The letter gained more than 680 signatures from alumni, students, faculty and parents by Friday, organizers said. 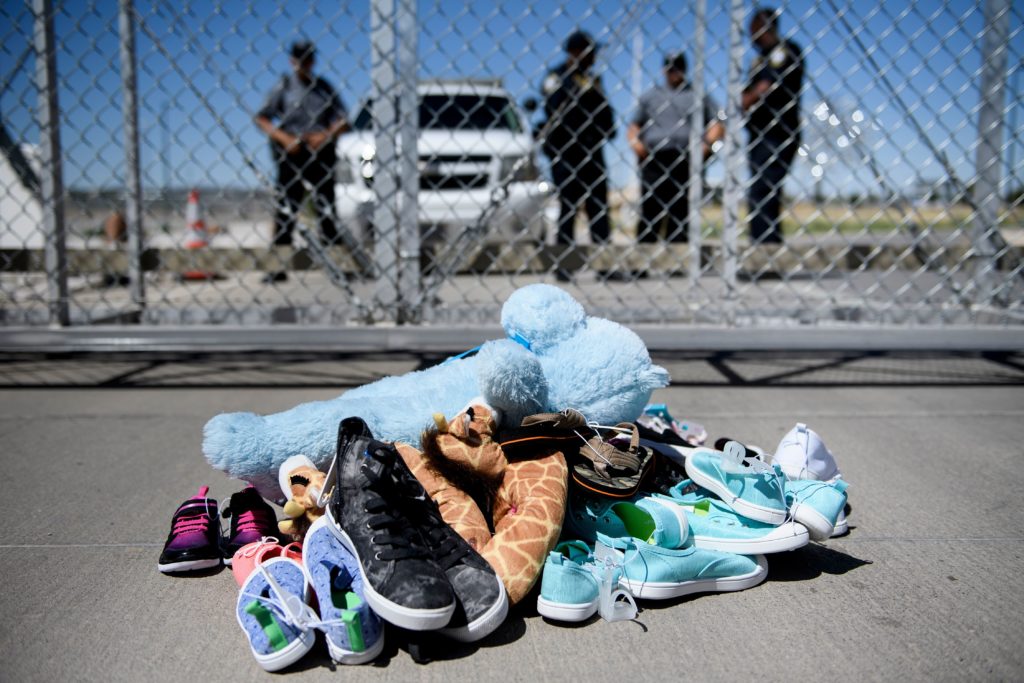 Security personnel stand before shoes and toys left at the Tornillo Port of Entry where minors crossing the border without proper papers have been housed after being separated from adults on June 21, 2018 in Tornillo, Texas. Photo by Brendan Smialowski/AFP/Getty Images

On Wednesday, Trump signed an executive order to end family separation, and Department of Homeland Security officials said as of Friday 500 children out of the 2,300 that were separated from their families had been reunited.

Next week, Congress plans to vote on an immigration bill that grants some young undocumented immigrants a path to citizenship, stops the process of family separation at the border and provides funding for a border wall.

The alumni activists said they would continue their work despite the administration’s reversal on family separation, citing concerns about the conditions in family detention centers, the difficulty of reunification and the need for continued legal support at the border.

“The people signing onto our letter are Republicans, Democrats, Libertarians, Socialists — they’re everyone,” Magray said.

In 2016, Hillsborough County, where Berkeley Prep is located, voted by a slim majority for Hillary Clinton. But in every county directly adjacent to Hillsborough, Trump garnered a plurality or majority of votes.

In response to the alumni action, Berkeley Prep released a statement: “As a school, Berkeley’s charge is not and cannot be to take a position on non-education-related governmental policy or action; it is to foster the confidence and build the critical thinking skills of our students so that they may do so.”

The group’s new goal is to raise $25,640, or the cost of tuition for one year at Berkeley Prep.

“We want to raise as much money as possible for the cause. We will continue to advocate for these children,” Siegman, one the alumi organizers, said.

Left: A small group of demonstrators protests outside of the children's tent encampment built to deal with the Trump administrations "zero tolerance" policy in Tornillo, Texas, on June 21, 2018. Photo by Mike Blake/Reuters