‘Purest form of hell’: Louisianans are living in tents and cars after losing homes to storms

COCODRIE, La. – As Tropical Storm Nicholas crawled through Louisiana this week, dumping nearly 10 inches of rain, Hank Deogracis and Elizabeth Schrader were living outside in a small tent.

Left homeless by Hurricane Ida, the couple is part of an emerging housing crisis along the Louisiana Gulf Coast — one made worse by the latest storm to hit this region.

“We stayed here. There was nowhere else to go. It was raining hard all day. It was downpour after downpour, and it never stopped,” Deogracis told the PBS NewsHour, rain pelting his tiny tent.

On Aug. 29, their home and hundreds of others in their fishing village of Cocodrie were blown off their pilings. Local officials say Ida’s winds clocked in at 180-200 miles per hour along the coast where it made landfall nearby, demolishing homes and overturning shrimp boats in the bayous. A little more than two weeks later, nearly 100,000 are still without power. Some are homeless.

“It’s rough,” said Schrader as she let out a big sigh. “I don’t know how long I can do this. It’s pretty hard at times. I just wish I had a better place to go. A roof over my head where I can take a bath and clean up.” 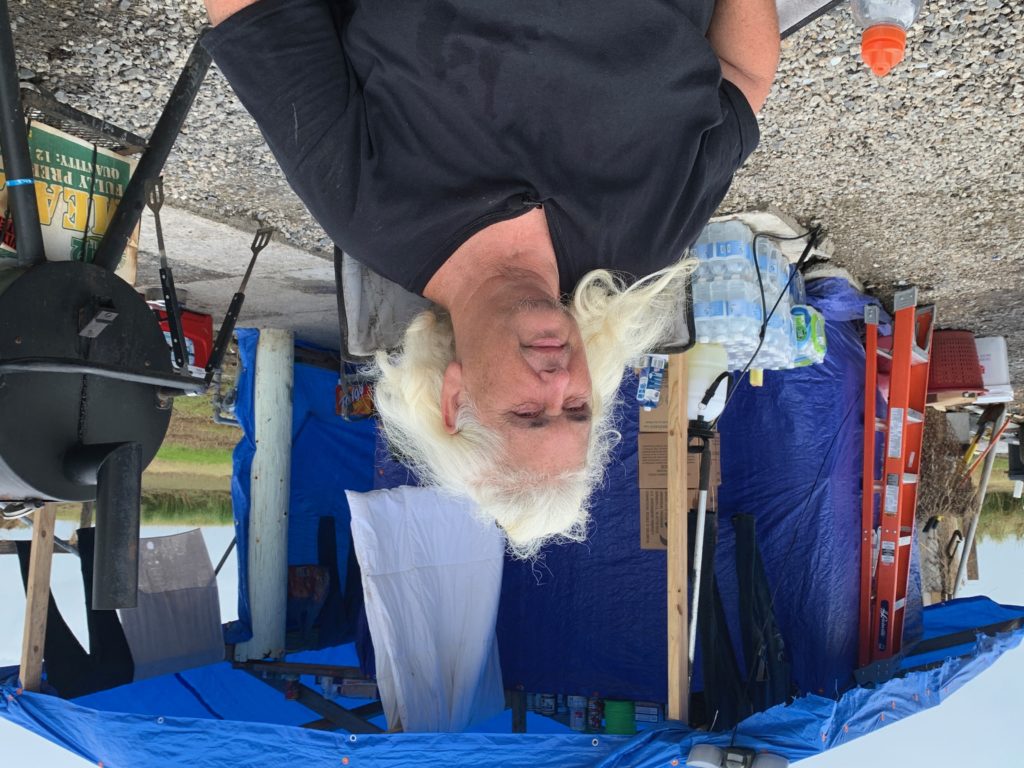 Elizabeth Schrader lost her house to Hurricane Ida. “Imagine when I pulled up in that driveway, and all I saw was the pilings. There was no house. My neighbor’s house was gone. I was terrified,” Schrader said. Photo by Roby Chavez/ PBS NewsHour

Schrader, whose eyes were swollen and red from crying, swept the sidewalk leading to the home that no longer exists. Her husband walked the shoulder of their street, looking for any trace of their former life. So far, they’ve only found one item — a small ceramic church. The storms have passed, but the misery continues.

Hurricane Ida battered one of the poorest regions of the country. Sixty percent of homes in Louisiana’s Bayou region along the Gulf Coast, including hard-hit Lafourche and Terrebonne Parishes, have been deemed unsafe according to parish officials. In some hard-hit areas, estimates suggest that 90 percent of the homes are uninhabitable, including nursing homes and apartment complexes.

“I just wish I had a better place to go. A roof over my head where I can take a bath and clean up.”

Local officials say there simply is not enough affordable housing for all the people left homeless. Few homeowners or renters have insurance. Many live below the poverty level and live paycheck to paycheck in a region with long-standing racial and social inequality.

“It’s a crisis in the making. I don’t see any quick and easy solutions here. It’s a crisis that’s about to blow up,” state Rep. Beryl Amedée told the NewsHour after spending the last two weeks touring hard-hit areas of her district. “People are still returning from evacuating and assessing their property. We’re still adding to the number of people who didn’t realize their homes are uninhabitable, and they all need a place to stay.”

What’s worse, according to housing advocates, is that as the natural disasters have uprooted families and destroyed livelihoods, some landlords have used the storm as an opportunity to kick renters out.

“Many of our residents are the least able to relocate in good times, but especially in times after a storm when housing is at a premium. The question is, where will they go?” Amedée said. “If we counted all of the apartment complexes in the parish, it’s not enough space for the number of people who would need temporary housing. So we’re definitely going to have to spread out farther to areas, which are also strained for housing.” 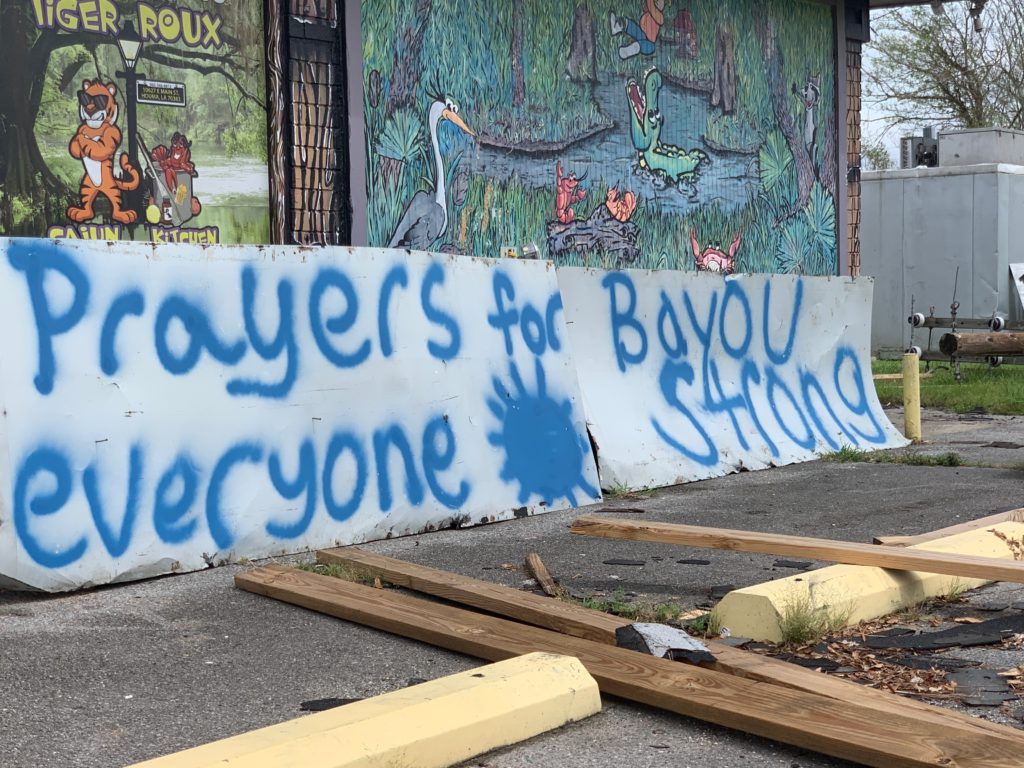 A sign saying “Bayou Strong” was left at a highway intersection to encourage passersby who had been affected by the devastation of Hurricane Ida. Photo by Roby Chavez/ PBS NewsHour

Terrebonne Parish President Gordon Dove says he’s working with FEMA and the state on temporary and permanent housing. The parish is even considering bringing in floating marine units used in the oil fields to house people on the bayou. For now, Dove has identified at least 10 places to accommodate people on land and water. Terrebonne Parish is stretched thin with high needs and no inventory. So now, he says, it’s up to the state and FEMA.

“We’ve given them the locations. We are on a ‘wait-and-see’ [basis] with FEMA. Housing is the biggest hurdle in Terrebonne Parish. We asked FEMA to step it up. They are looking at housing 200 to 300 [people] to start with. As we move forward, we’ll see exactly how many we need,“ Dove said.

For now, it would only be enough to bring home people still scattered across the state in shelters, some of which are upward of 300 miles away. Housing advocates feel like the government is sometimes disconnected from what it is like for people who have no safety net.

On Friday, the U.S. Housing and Urban Development secretary visits Louisiana Gov. John Bel Edwards to discuss a path forward. Local officials say it is getting worse by the day. “Our biggest problem now and what we’ve been fighting for the last couple of days with FEMA and the governor’s office is what the long-term sheltering will look like for these residents. We can bridge that gap for another week or so but being told that we’ll have to wait 30 to 60 days for these units to come in is unacceptable to us,” Lafourche Parish President Archie Chaisson said.

“Things are at a standstill. We really need to leave, and I just don’t want to stay here anymore. My heart can’t take it. I’ve lost everything.”

“It’s heartbreaking to see people without their homes. Most have lived in these homes for generations. And now it is destroyed or needs a lot of work. They don’t have the money to rebuild, and a lot don’t have insurance. I hope the federal government and FEMA really come through. The state and parish are doing all they can,“ Dove said.

It’s the same in nearby Lafourche Parish. Ida survivors worry the heavy rainfall for Nicholas could make matters worse. Many of the homes in both areas are uninhabitable, with holes punched through roofs and growing mold. Some of the many people made homeless are now living on porches or in trailers in their driveways.

Nichole Hoffele is living in a borrowed car in Galliano next to her apartment complex that was destroyed. The mother of two daughters cringed when she first heard Nicholas would bring more rain.

“I’m living horribly. I don’t have a home. It’s the purest form of hell I can think of,” Hoffele said, crying from the front seat of her friend’s Chevy Malibu as rain poured from the sky. “My roof is leaking, and it’s raining all over my apartment. The little bit that I do have is now being further destroyed. The mold is already growing, and the rain will bring more.” 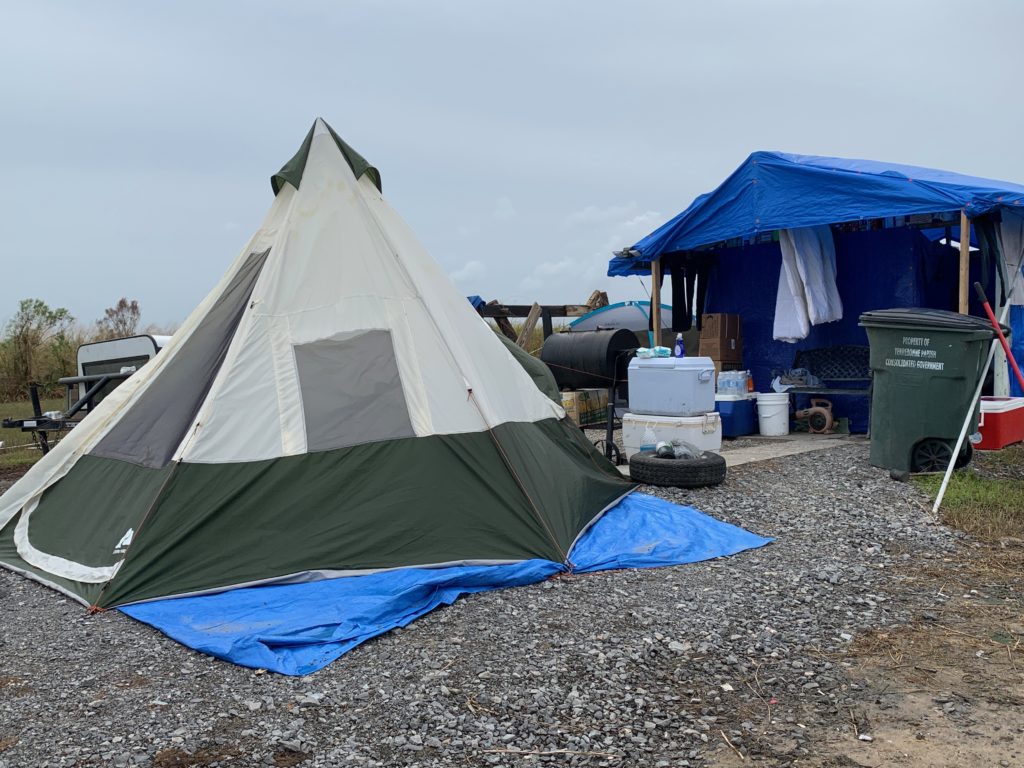 Hank Deogracis and Elizabeth Schrader built a makeshift shelter with scrap wood and blue tarps. Inside they are living off donated water and food. Photo by Roby Chavez/ PBS NewsHour

Hoffele’s anxiety is compounded by the excessive heat, which she knows will take a toll on her because she has asthma and bronchitis. Louisiana’s state health department says extreme heat during extended power outages was the biggest killer following the storm itself. Hoffele, like many, has even considered living in her damaged apartment but realizes it’s dangerous.

“No matter how much I clean it, it stinks. The mildew and mold are growing. It’s horrible. We can’t sleep up there. It’s hot and miserable,” she said “Things are at a standstill. We really need to leave, and I just don’t want to stay here anymore. My heart can’t take it. I’ve lost everything.”

Sen. Bill Cassidy, R-La., toured the area this week, and at the top of his to-do list when he returned to Washington, he said, was finding solutions to the growing housing problem.

“It’s horrible to think about. Imagine when I pulled up in that driveway, and all I saw was the pilings. There was no house.”

“We need housing solutions. Temporary housing that ideally would transition very quickly to permanent. Wherever I’ve been…housing is a major issue,” said Cassidy, standing next to a pile of storm debris. “A lot of the housing was substandard, to begin with. It was not up to code, and that’s why it gets damaged. So now, people are without homes.”

FEMA has supported some local efforts. To date, the agency has handed out $329 million in grants to homeowners and renters for losses and needs not covered by insurance and paid 10,000 households to stay in hotels.

“We’re really concentrating on people whose homes are uninhabitable and people who are in shelters as a direct result of the storm to help people get a roof over their heads,” FEMA spokesperson John Mills said. “My understanding is various parishes are asking the state for FEMA to bring in housing. For FEMA, it is the last resort when no other housing is available.”

Deogracis worries about the future that he and other fishermen in his community face. “It’s horrible to think about. Imagine when I pulled up in that driveway, and all I saw was the pilings. There was no house. My neighbor’s house was gone. I was terrified,” Schrader said. They are now living on the land.

The couple, who has lived here for 20 years, built a makeshift shelter with scrap wood and blue tarps. Inside they are living off donated water and food. Their two dogs are crated and shivering in the corner. A clothesline hangs with hand-washed clothes. They wash in buckets of water. Neither of them knows what’s next.

“I’m washing my clothes by hand. I’m sleeping in a tent,” Schrader said. “We don’t have a bathroom. We got nothing.”

Roby Chavez is a Communities Correspondent for the PBS NewsHour out of New Orleans.