The U.S. women’s soccer team’s very public push to put gender equity in the spotlight — boosted by their World Cup win this summer — has reignited the fight for equal pay as a cause célèbre in the sports world.

But there’s one member of the team whose battle has been more private; she is not part of the equal pay lawsuit against the U.S. Soccer Federation despite receiving a lower salary than her male counterparts.

Announcing Tuesday that she would be stepping down from her position, head coach Jill Ellis leaves the women’s national team as the highest paid women’s soccer coach in the world. She said the timing was right for her and her family.

But sources told the Guardian that U.S. Soccer had declined to give Ellis a new contract before the World Cup and instead agreed to increase her pay from $300,000 to $500,000 — a substantial hike, yet still much less than the salaries of the coaches for the men’s national team.

The former coach for the U.S. men’s team, Jürgen Klinsmann, was reportedly paid $3.3 million in the last year of his contract in 2016. Former men’s coach Bruce Arena made $899,348 in 2017. The salary for the current coach, Gregg Berhalter, is not public.

Ellis’ departure and salary raise the question of who will be the national team’s next head coach — and how much she or he will be paid? It also exemplifies a persistent pay disparity between coaches of men’s teams and women’s teams at the college, professional and national levels.

Pay disparities across all levels

Identifying the depth of the pay disparity at the professional level can be difficult because many coaches’ salaries are not usually disclosed to the public. Most of the public information on pay is at the college level because federal law requires universities to disclose certain information about gender disparities.

A comprehensive NCAA gender-equity report published in 2012 found that in 2010, Division I men’s head coaches were paid 42 percent more than women’s coaches and the gap between the two was widening. A comparison of data compiled by the U.S. Department of Education shows that in 2017, the average salary for head coaches of a men’s team are still routinely higher than the salaries of coaches for women’s teams, even among the same sport at the same university.

A study from Kent University researchers published last year found the pay gap for coaches is largely divided by men’s and women’s teams rather than the gender of the coach.

“It’s pretty clear that head coaches of men’s teams get paid far more than head coaches of women’s teams, which is where the women are,” said Nicole M. LaVoi, director of the Tucker Center for Research on Girls and Women in Sport at the University of Minnesota. 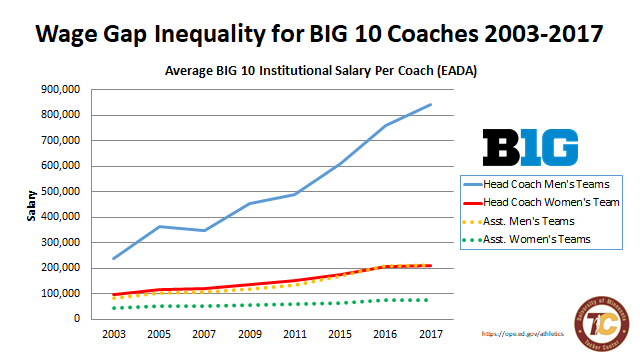 In 2017, head coaches of men’s teams in the Big 10 made more than four times the salary of women’s team coaches. Courtesy: Tucker Center

Women have also started to become assistant coaches in both the NBA and NFL.

That could give female coaches more options for better pay, but it still leaves women’s programs at a disadvantage. Both Gasso and female coaches for men’s teams are still the exception, not the rule.

What determines a coach’s pay

Critics of pay equity in sports point out that men’s teams tend to bring in more revenue through merchandise, ticket sales and advertisements. In the case of colleges, a strong sports program can also boost a school’s overall reputation.

“A coach’s salary should reflect the value of their productivity,” said Andrew Zimbalist, a sports economist at Smith College.

If a coach can recruit top-quality players and lead a team to more victories, that can bring in more total revenue to the team and the program.

Proven success may lead to a women’s coach being paid more than other women’s coaches, but it far from guarantees they will be paid equal to men’s team coaches.

When it comes to Jill Ellis’ record, she led the U.S. team to two World Cup victories. The men’s team failed to qualify for the 2018 World Cup.

Shannon Miller knows from first-hand experience that wins don’t translate to equal pay. She led the University of Minnesota Duluth’s women’s hockey team to five national championships. She said when she asked the university to invest more in her program, she was told she didn’t need the money because her team was performing well without it.

“It’s smoke and mirrors, they spin it how they want to spin it,” said Miller, who was fired from the university and then sued alleging she was discriminated against for speaking out about equal pay. A jury recently awarded her $4.2 million.

Miller, who also coached Canada’s women’s hockey team for seven years, said the discrimination against female coaches is rampant across all levels of play.

“When I coached Team Canada, we had to fall in line, certainly not fight back,” she said. “We were more successful than the men’s national team program, but they were given more resources, more staff.”

What pay inequality among coaches means for teams

Women’s coaches say when they are not paid equally to men, it can have a negative affect on their teams and whether they feel valued.

Unequal pay can reduce job retention and even the number of women who decide to become coaches in the first place, said Megan Kahn, the executive director of WeCoach, a group that advocates for women’s coaches.

Kahn intoned the phrase, “If she can see her, she can be her.” But if young girls do not see female coaches, they will be less likely to aspire to become a coach when they grow up, Kahn said.

While sports governing bodies could decide to raise the pay of women’s programs, advocates say equal pay for coaches is unlikely to happen overnight because pay disparity is widespread.

“Sports is a microcosm of society,” said Sarah Axelson, senior director of advocacy at the Women’s Sports Foundation. “If you look at other fields like tech, across fields, you are going to find instances of pay inequality and a disparity of investment.”

Advocates of women’s sports say U.S. soccer could set an example for other sports teams, and for society as a whole, by providing Ellis’ replacement with a salary equal to the men’s coaches. Right now, there is no indication that will happen.

How the U.S. women’s soccer team offers a cultural story, not just an athletic one