Charles Ryu started living on the street in North Korea when he was 11 years old. After his mother died of starvation, and with his father living in China, Ryu survived by begging strangers for food or a place to sleep.

Now 23 years old and living in the U.S., Ryu and other North Korean defectors say the historic meeting between President Donald Trump and Kim Jong Un was an unprecedented opportunity to address the egregious human rights abuses in their home country. But after Trump and Kim released their joint statement, Ryu and others were disappointed and offended that human rights didn’t play a central role in the talks.

“What’s going to happen when he [Trump] goes out of office? Are we going to have another ‘peace talk’? Kim will start testing weapons again, and nothing will have changed for North Korean people.”

Ryu escaped North Korea twice before turning 17. The first time, his Chinese stepbrother smuggled him out of the country, taking him to their father in China. But after one of his father’s neighbors reported his escape, he was captured and sent to one of North Korea’s prison labor camps. Human Rights Watch reports that between 80,000 and 120,000 people are currently imprisoned in the camps.

He was discharged from the labor camp nine months later after almost dying of malnourishment. Ryu said he worked 18 hours per day in the camp, with a daily food ration of 150 kernels of corn.

Ryu then found a job working in a coal mine in exchange for rice to eat. After a year there, he attempted escape again. He swam the river to China, and started walking to his father’s house, but passed out in the road on the way there from dehydration and exhaustion. This time, he was found by a Chinese man sympathetic to his cause, who connected him to a South Korean missionary, gave him food, water and medicine, and bought him a bus ticket for the 18-hour ride to his father’s house.

In 2012, he received refugee status, which allowed him to come to the U.S., and he was placed with a foster family in California. Now, he works as an advocacy intern at Liberty in North Korea, a nonprofit that helps North Korean refugees escape and get settled. From constantly monitoring changing safe routes through China and Southeast Asia, to cultivating a network of relationships with people on the ground to safely transport refugees, to providing resettlement funds, they work to ensure escapees won’t be saddled with crippling debt after paying a broker to escape.

Many experts and North Korean advocates were surprised that human rights didn’t appear in the leaders’ joint statement, especially because Trump has referenced the topic in the past, including at his first State of the Union, when the president hosted defector Ji Seong-ho. When Trump shared Ji Seong-ho’s story, he called Kim Jong Un’s regime a “cruel dictatorship.” In February, the President met with North Korean defectors at the White House to hear their stories, too.

But since the summit, Trump has changed his tone, telling ABC’s George Stephanopoulos that “his country does love him. His people, you see the fervor. They have great fervor.”

He also softened his language on the conditions in North Korea. At a press conference following the summit, Trump said that human rights abuses happen “in a lot of places” around the world, and that Kim was a “tough” leader.

Trump raised the issue of human rights in summit meetings with Kim, according to a State Department official who did not provide further details on what they discussed.

The U.S. has attempted to address the human rights conditions in North Korea before. Madeleine Albright, Secretary of State to former President Bill Clinton, traveled to Pyongyang in 2000 to meet with Kim Jong Il in hopes of brokering a deal to end the country’s nuclear program in exchange for billions of dollars in aid for food, fuel and infrastructure development. The deal ultimately fell apart, and many later called the meeting a propaganda victory for North Korea.

“Trump has term limits, Kim does not,” she said. “What’s going to happen when he [Trump] goes out of office? Are we going to have another ‘peace talk’? Kim will start testing weapons again, and nothing will have changed for North Korean people.”

An outspoken activist for North Korean human rights, Park, 24, garnered international attention for her lecture at the 2014 One Young World summit in which she recounted her escape from North Korea in 2007, sharing that she watched a Chinese broker rape her mother and that they walked through the Gobi desert in Mongolia, eventually reaching South Korea in 2009. The video went viral on social media and currently has almost 4 million views on YouTube. 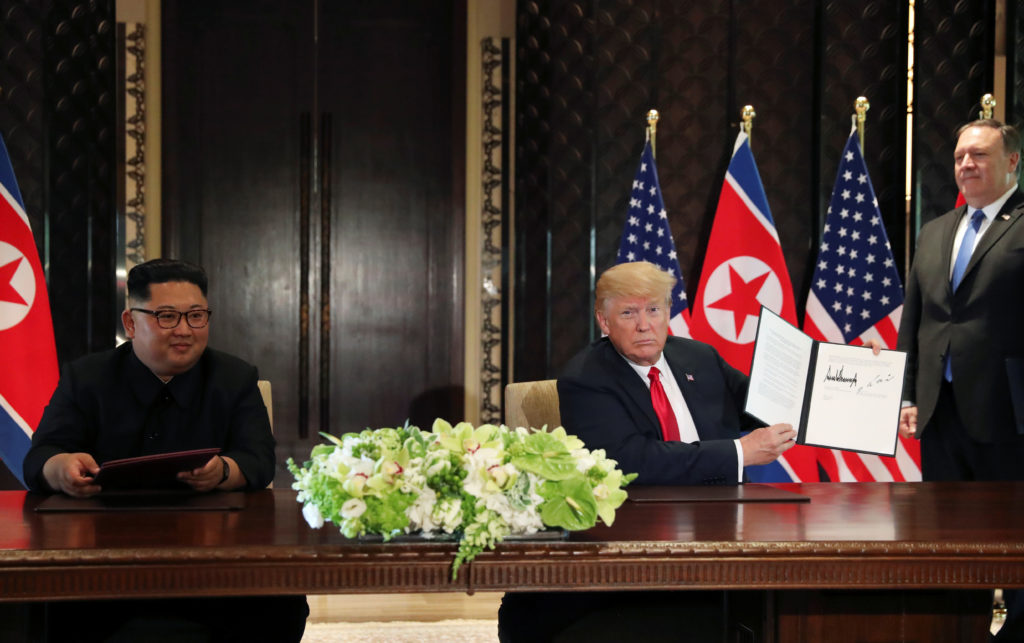 U.S. President Donald Trump shows the document that he and North Korea’s leader Kim Jong Un signed acknowledging the progress of the talks and pledge to keep momentum going, after their summit in Singapore June 12, 2018. Photo by Jonathan Ernst/Reuters

Park said that before the summit, she saw America as a beacon of hope.

“It’s so heartbreaking to see America appreciating this dictator,” she said. “This is the leader of the free world! I feel less safe, living here. … Will I be deported if America and North Korea become allies? It keeps me awake at night. What will I tell my son?”

Jinhye Jo, 30, escaped North Korea with her sister and mother in 2008, after six of her other family members died of starvation or other causes related to the regime. They escaped to China, where they lived in hiding and attended a nearby Christian school taught by a Korean-American pastor named Yo-Han Yoon. When they were captured and sent back to North Korean prison, Yoon fundraised $10,000 for their release, and they were able to come to the U.S. as refugees.

Jo founded the nonprofit North Korean Refugees in the United States, which helps facilitate the escape and resettlement of North Koreans in America. She says she’s supported Trump in the past because “he’s a Christian,” but was hurt by his approach to Kim.

“I was really shocked. I’m a citizen of the U.S. right now. And I’m trying to get people to come to this country,” she said. “But if Trump becomes friends with Kim, where do I have to go? Where can my people go?”

Still, Ryu and other advocates like him hope the meeting signals better communication between his native country and his new country going forward. Ryu thinks open communication between North Korea and the rest of the world will eventually help improve human rights conditions, because they could lead to expanded  trade and economic growth down the road.

“I stand with the North Korean people, no matter what,” he said. “I just want things to improve for them.”