Human rights is a back-burner issue at Trump-Kim summit

WASHINGTON (AP) — President Donald Trump said it himself to Congress and the American people: “No regime has oppressed its own citizens more totally or brutally than the cruel dictatorship in North Korea.”

But when it comes to human rights, don’t expect Trump to hold Kim Jong Un’s feet to the fire at the Singapore summit. The focus is on nuclear weapons, and the young autocrat’s international standing is likely to be boosted regardless of the outcome.

While Trump highlighted Pyongyang’s problematic human rights record at the State of the Union, the president has skirted those concerns since agreeing to the summit.

In the run-up to Tuesday’s historic face-to-face with Kim, Trump has appeared unconcerned about the implications of feting an authoritarian leader suspected of ordering the public assassination of his half-brother with nerve agent, executing his uncle by firing squad, and presiding over a notorious gulag estimated to hold between 80,000 and 120,000 political prisoners.

While Trump highlighted Pyongyang’s problematic human rights record in January during his State of the Union address — where he also said the “depraved character of the North Korean regime” demonstrated the nature of the nuclear threat it could pose — the president has skirted those concerns since agreeing in March to Kim’s suggestion of a summit.

When Trump met former North Korean military intelligence chief Kim Yong Chol at the White House two weeks ago, the president said they didn’t discuss human rights, underscoring that it was not a primary concern. At a pre-summit briefing by Secretary of State Mike Pompeo on Monday, the issue didn’t get a mention.

READ MORE: What could really happen at the Trump-Kim summit?

Robert King, who served as U.S. envoy on North Korean human-rights issues under the Obama administration, said Trump has used human rights as an instrument to get Kim Jong Un to negotiate on nuclear weapons, but not as a policy priority in its own right.

“The other problem is that he’s anxious to see some progress at the summit, and human rights is not an easy issue to raise with Kim Jong Un,” King said.

U.S. presidents have always faced a predicament in balancing national security and geopolitical priorities with democratic values. But Trump has notably avoided calling out authoritarian leaders on human rights when he wants closer ties with them, whether it’s adversaries like China and Russia or allies like Saudi Arabia and the Philippines.

At the same time, he’s taken a confrontational path toward Western allies on issues like trade, climate and the Iran nuclear deal. He bounced to the Singapore summit after a tempestuous G-7 summit where the U.S. was isolated from its key European partners as never before and Trump even derided his Canadian host, a paragon of liberal democracy, as “dishonest” and “weak.” 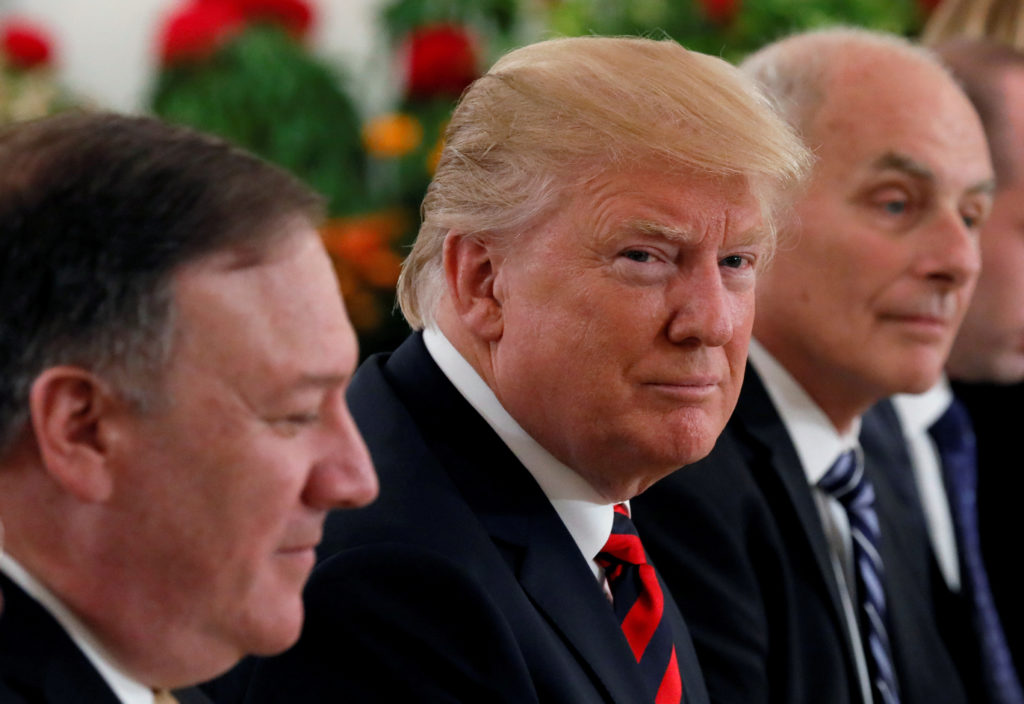 Kim, meanwhile, will be granted a measure of validation from Washington that eluded his father and grandfather. They only ever met with former U.S. presidents, a symptom of six decades of hostility between the U.S. and North Korea, which remains a pariah in the eyes of the West not just for its nuclear and missile threats but for flouting international norms of diplomatic behavior.

Human-rights advocates who lauded Trump when he hosted eight North Korean defectors at the White House days after his State of the Union speech are now uneasy about his engagement with Kim, whom the president recently praised as “very honorable.”

Greg Scarlatoiu, executive director of the U.S.-based Committee for Human Rights in North Korea, and Rabbi Abraham Cooper at the Simon Wiesenthal Center urged Trump to seek “the complete, verifiable, irreversible dismantlement” of North Korean political prison camps — mimicking the formulation used by the U.S. in its demand for that nation’s denuclearization.

While human rights will get a low billing in Singapore, Trump hasn’t totally ignored the issue.

During a quarter-century of on-off negotiations, human rights have played second fiddle for U.S. administrations seeking to ameliorate the threat posed by the North’s nukes, and there’s a reason. Raising human rights risks playing into North Korean suspicions that the U.S is intent on toppling its hereditary, totalitarian regime by seeking to open its political system, which only reinforces Pyongyang’s notion that it needs a nuclear deterrent to ensure its survival.

Joseph Yun, former U.S. envoy for North Korea policy, alluded to that when he told a Senate hearing last week that there’s a risk of “overloading the agenda” for the summit. He said if the U.S. is going to offer North Korea the security guarantees it seeks in return for denuclearization, it “also means you’re not going to interfere in domestic happenings, domestic politics” — like human rights.

But John Sifton, Asia advocacy director for Human Rights Watch in Washington, contends that rights issues can’t be separated from the goal of reaching a nuclear deal with North Korea. International inspections and verification of such a deal would require more openness from the North, typically allergic to outside scrutiny. And under a 2016 U.S. law, relief from U.S. sanctions that target the North Korean government would require progress on human rights, he said.

While human rights will get a low billing in Singapore, Trump hasn’t totally ignored the issue.

After he met Kim’s close aide Kim Yong Chol on June 1, Trump said human rights “probably” would be discussed at the summit, and he has committed several times to raise the issue of Japanese nationals abducted by North Korea in the 1970s and 1980s — a longstanding request of Japanese Prime Minister Shinzo Abe that he reiterated to the president in person last week.