ATLANTA (AP) — A protest turned violent in downtown Atlanta on Saturday night in the wake of the death of an environmental activist who was killed by authorities this week after officials said the 26-year-old shot a state trooper.

Masked activists dressed in all black threw rocks and lit fireworks in front of a skyscraper that houses the Atlanta Police Foundation, shattering large glass windows. They then lit a police cruiser on fire, smashed more windows and vandalized walls with anti-police graffiti as stunned tourists scattered.

The violent protesters were a subsection of hundreds of demonstrators who had gathered and marched up Atlanta’s famed Peachtree Street to mourn the death of the protester, a nonbinary person who went by the name Tortuguita and used they/it pronouns.

Tortuguita was killed Wednesday as authorities cleared a small group of protesters from the site of a planned Atlanta-area public safety training center that activists have dubbed “Cop City.”

The Georgia Bureau of Investigation has said Tortuguita was killed by officers after shooting and wounding a state trooper, but activists have questioned officials’ version of events, calling it a “murder” and demanding an independent investigation.

According to the GBI, the incident was not recorded on body cameras. The bureau said Friday that it determined the trooper was shot in the abdomen by a bullet from a handgun that was in Tortuguita’s possession.

READ MORE: Body cameras are seen as key to police reform. But do they increase accountability?

Word of Saturday’s protest had been widely circulated ahead of time on social media and among leftist activists, with some passing out flyers that read, “Police killed a protester. Stand up. Fight back.”

Atlanta Police Chief Darin Schierbaum said during a news conference that authorities made six arrests Saturday and recovered explosive devices after the protesters damaged property along Peachtree Street, a corridor of hotels and restaurants. He said authorities halted the violence within two blocks and no citizens or law enforcement officers were injured.

“We can tell now, early in this investigation, this was not the focus tonight just to damage the windows of three buildings and set a police car on fire,” Schierbaum said. “The intent was to continue to do harm, and that did not happen.”

“Violence and unlawful destruction of property are not acts of protest,” the Republican governor tweeted. “They are crimes that will not be tolerated in Georgia and will be prosecuted fully.”

The initial hour of the demonstration had been peaceful as a few activists shared their memories of Tortuguita, describing them as an extremely loving, caring member of the “Stop Cop City” community. The speakers said Tortuguita had undergone a 20-hour medic course in order to serve as a medic for fellow “forest defenders” who had found their home in the DeKalb County woods just outside Atlanta city limits. 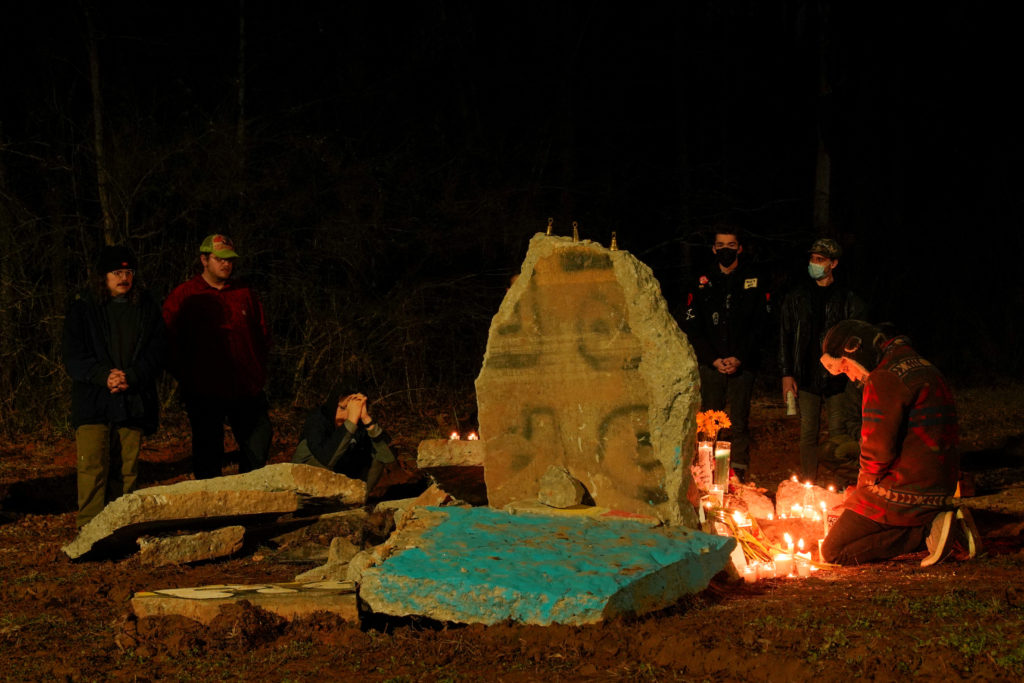 Mourners visit a memorial in memory of protestor Tortuguita who died during a police raid inside Weelaunee People’s Park, the planned site of a controversial “Cop City” project near Atlanta, Georgia, Jan. 20, 2023. Photo by Cheney Orr/REUTERS

Opponents of the training center have been protesting for over a year by building platforms in surrounding trees and camping out at the site.

They say the $90 million project, which would be built by the Atlanta Police Foundation, involves cutting down so many trees that it would be environmentally damaging. They also oppose spending so much money on a facility they say will be used to practice “urban warfare.”

The GBI said about 25 campsites were located and removed in Wednesday’s raid, and mortar-style fireworks, edged weapons, pellet rifles, gas masks and a blow torch were recovered.

Seven people were arrested and charged with domestic terrorism and criminal trespass, with other charges pending, the GBI said. They range in age from 20 to 34 years, and none are Georgia residents.

Left: Protestors hold signs and march during demonstrations in Atlanta, Georgia related to the death of a 26-year-old activist, who was killed during a police raid inside Weelaunee People's Park, the planned site of a controversial "Cop City" project, Jan. 21, 2023. Photo by Cheney Orr/REUTERS