Body cameras are seen as key to police reform. But do they increase accountability?

Amid widespread calls for police reform, there’s a renewed push from both advocates and lawmakers to require officers to wear body cameras.

This week, New Mexico’s legislature approved a bill that would require all officers in the state to wear body cameras. In Congress, House Democrats introduced a bill this month that would, among other things, require federal law enforcement to wear body cameras and provide funding and incentives for municipal law enforcement to do the same. A Republican proposal in the Senate would also establish grant funding to help police departments purchase body cameras and supporting technology for maintenance and data storage.

For nearly two decades, law enforcement agencies have explored and implemented the use of body cameras as a tool to help hold officers accountable and make departments more transparent — a way to help rebuild trust with their communities and reduce citizen complaints. Video footage can also enable departments to collect evidence during investigations or better defend their actions during a particular encounter.

And reform advocates have long called for all officers to be equipped with the technology that could help document excessive use of force and its disproportionate effect on communities of color.

But despite widespread support for body cameras — from politicians, reform advocates, and police departments — the rules around who wears them, when they are activated and what is done with the footage can still vary widely from state to state, and department to department. And research on whether the devices affect officer behavior and accountability has shown mixed results.

When did U.S. police start to use body cameras?

Police in the United Kingdom began experimenting with body-worn cameras in 2005, after which American police showed a “slow growing interest” in them, said Michael White, who is co-director of training and technical assistance for the Justice Department’s body-worn camera policy and implementation program.

By 2013, about one-third of local police departments in the U.S. reported using body cameras, according to the Bureau of Justice Statistics. Around the same time, a study on the Rialto Police Department in California showed a 59 percent reduction in police-reported use of force incidents among officers who used the cameras, said Daniel Lawrence, a principal research associate at the Justice Policy Center with the Urban Institute. Data from that study also showed an 87.5 percent decline in citizen complaints against officers who wore the cameras.

Leaders and other stakeholders used the Rialto study to make a case for the use of body cameras, Lawrence said.

“A lot of departments purchased cameras so they wouldn’t be the next Ferguson.”

Another catalyst for widespread adoption of cameras came in 2014, after a white police officer killed Michael Brown, an 18-year-old Black man, in Ferguson, Missouri. Brown’s death came amid a string of other highly publicized police killings of Black people and gave rise to a national debate over policing practices. Amid that conversation, interest in body cameras for police “exploded,” said White, who is also a professor at Arizona State University’s School of Criminology and Criminal Justice.

“A lot of departments purchased cameras so they wouldn’t be the next Ferguson,” White said. “There was a lot of emphasis on transparency, on demonstrating to your community that you’re willing to be open and to have some accountability.”

In 2015, the federal government under President Barack Obama also provided more than $23 million to 73 local and tribal police agencies to expand the use of body cameras. The BJS reported that by 2016, nearly half of the country’s 12,267 local police departments were using body cameras. Among departments with more than 500 full-time officers, 70 percent were using body cameras by that time. Yet only five states have laws specifically requiring at least some officers to use body cameras, according to the National Conference of State Legislatures. 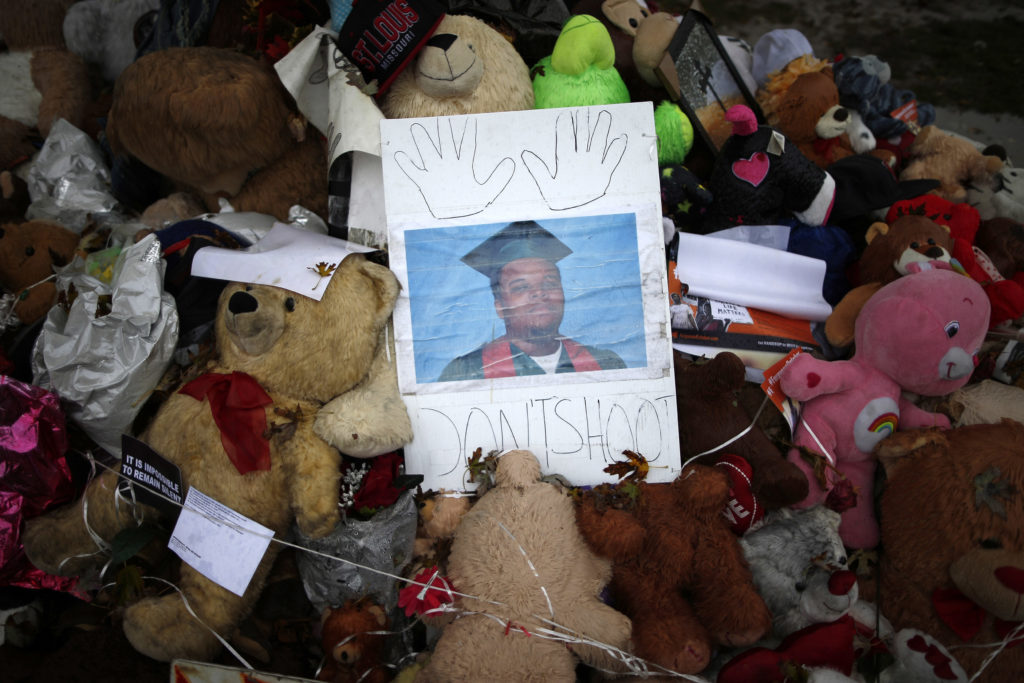 A memorial set up for Michael Brown is seen in Ferguson, Missouri, October 10, 2014. Brown was killed by Ferguson police officer Darren Wilson. Brown was unarmed when he was shot at least six times, and outrage over his death has fuelled weeks of sometimes violent protests. REUTERS/Jim Young (UNITED STATES – Tags: CRIME LAW CIVIL UNREST)

How does law enforcement feel about body cameras?

The initial push for body cameras met some criticism from departments and police unions.

The Boston Police Patrolmen’s Association in 2016 sued Boston city administrators in an effort to stop a pilot program mandating body cameras for 100 officers. The union cited “increased risk of harm to officers” based on a study indicating that officers in the U.S. and U.K. who were wearing body cameras were 15 percent more likely to be assaulted.

Three body camera researchers told the NewsHour that while they are familiar with this study, they have not found similar results in other research. A Massachusetts judge rejected the union’s request to delay the body camera program in Boston.

Other police agencies have resisted body cameras because of the costs, according to BJS reports. The Police Executive Research Forum said in a 2018 report that the Dallas Police Department had deployed about 1,000 cameras to cover 30 percent of its officers. Purchase costs per camera were about $189, but maintenance and storage for the thousands of hours of video footage amounted to $789 per camera for one year. In addition to other administrative staff costs, the annual cost in Dallas was $1,125 per camera, about $1.1 million in total.

PODCAST: This city already rebuilt its police department. Did it work?

“A lot of chiefs of police want these body cameras, because a lot of times they can also work in the department’s favor and the officers’ favor in depicting a resident’s behavior,” said Kami Chavis, a professor with Wake Forest University School of Law.

For civilian complaints, having access to video footage can work in the officer’s favor, said Andrea Headley, an assistant professor of public affairs with The Ohio State University who researches police-community relations. Some departments may have civilians review video of an incident before they move forward with a complaint, she said. Upon seeing the video and assessing their own actions, civilians may decide not to pursue the complaint.

What does the latest research indicate about the effectiveness of body cameras?

Early interest in body cameras stemmed from concern about excessive use of force and how race factored into police encounters, Headley said. However, the research on these areas is limited, she added.

According to Headley, there isn’t published research on how body cameras affect racial disparities in policing. “There’s nothing that really looks at that race aspect, which to me is almost baffling.”

Lawrence of the Justice Policy Center said research indicates overall improvement in civilian satisfaction with officers who wear body cameras, but he has not found specific data comparing that satisfaction among different racial groups.

And when it comes to how cameras affect use of force, recent studies are more mixed than the Rialto report, Lawrence said. Later studies were larger and more rigorous, and indicated that the presence of body-worn cameras has minimal effect as a deterrent.

A 2017 study in Washington, D.C., that examined more than 2,000 officers also found body cameras had a negligible effect on officer behavior. “These results suggest that we should recalibrate our expectations of [body cameras’] ability to induce large-scale behavioral changes in policing,” the paper stated.

A 2018 study of 504 officers in the Milwaukee Police Department, conducted by Lawrence and other Urban Institute researchers, found that body cameras had no effect on the likelihood officers would use force in the course of their duties.

However, White of the DOJ’s body camera program said he has found that 11 of 19 studies on the subject have shown a reduction in use of force among officers wearing cameras. “I think that’s still pretty strong,” he said.

READ MORE: What is the ‘defund the police’ movement? 5 questions answered

But the presence of body camera does not have much effect on whether disciplinary action is taken, Lawrence said. And the prevalence of video technology on street corners and cell phones means that police officers are already filmed regularly in other ways, he added.

Additionally, whether law enforcement releases dashcam or body camera footage, and how much of the video they choose to release, varies between states and jurisdictions. Police in Minneapolis, for instance, released body camera footage of officers’ fatal encounter with Floyd, but it was heavily redacted.

It’s very rare for police to face prosecutions generally, White said, even with the use of body cameras. But in a few high-profile cases, body camera footage has been used against officers in trials that led to convictions. In 2018, a former officer in Texas was convicted of killing 15-year-old Jordan Edwards. In the 2014 shooting of Laquan McDonald in Chicago, four officers were fired and one was convicted of second-degree murder and 16 counts of aggravated battery after dash cam video showed McDonald walking away from the officers, conflicting with an officer’s claims that he was advancing toward him with a knife.

Much more often, body camera footage is used in the prosecution of civilians. One 2016 study found that 92.6 percent of prosecutors’ offices nationally in jurisdictions where police wear body cameras have used that footage as evidence in cases against private citizens, while just 8.3 percent have used it to prosecute police officers. 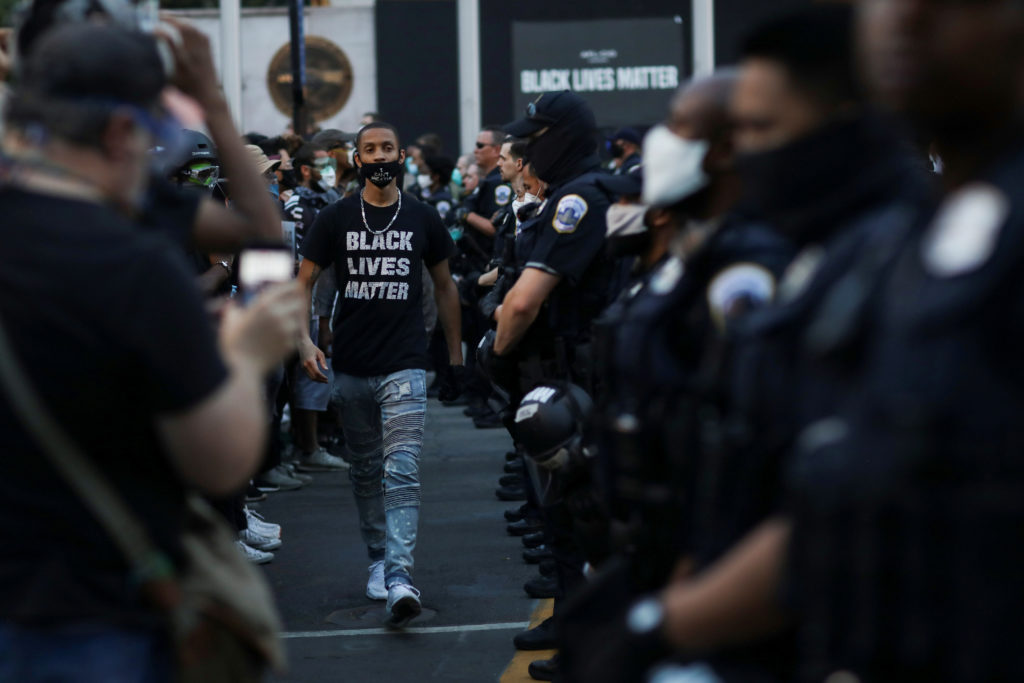 What do researchers recommend for police body camera programs?

Despite inconsistencies in their findings, researchers told the NewsHour that body cameras can still be an effective tool for police reform and transparency when used properly.

One key challenge is specifying how police body cameras should be used, researchers said. A number of departments give officers discretion to determine when they turn their cameras on and off, while others provide more guidance, Headley said.

White said that getting police officers to activate the cameras can be a challenge. Officers engage in numerous interactions daily, and “an officer may forget; they may decide not to activate because of citizen requests,” White said, or they may leave the camera off for more “nefarious” reasons like misconduct.

Chavis said police departments should establish clear criteria for when officers activate cameras, who has access to the video and how often the footage is reviewed. Camera footage may sit for weeks in some cases without review, Headley said.

READ MORE: Ella Jones will be Ferguson’s first black mayor. Here’s what she had to say about race and policing

Police video provides an important opportunity for police departments to train their officers, Chavis and Lawrence said. Police leaders should regularly monitor video to get an understanding of how their officers operate in the field, Lawrence said. Video and audio analytic technology have the potential to help departments flag troubling behavior or language used by officers, he added.

At the federal level, experts said lawmakers can establish clearer standards for agencies while also giving them space to determine how to best use body cameras for their communities. One area to be mindful of, experts said, is civilian privacy and surveillance concerns.

House Democrats’ Justice in Policing Act would provide some specific requirements for body camera activation and public access to video footage. But while requiring and encouraging the use of body cameras has bipartisan support, the legislation includes a number of other measures that would struggle to win support from Senate Republicans.

The proposed legislation is a testament to the long push for police reform, Chavis said, and can provide important federal guidance.

“The ideas that are within this federal bill are solutions that for years police reform advocates have been suggesting. They are not new,” Chavis said. “I think all police want to be well-trained and seen and viewed as professionals. And I think a lot from this legislation can help them do that.”