LAKE CHARLES, La. — The remnants of Hurricane Laura unleashed heavy rain and twisters hundreds of miles inland from a path of death and mangled buildings along the Gulf Coast, and forecasters warn of new dangers as the tropical weather blows toward the Eastern Seaboard this weekend.

Flooding and more tornadoes were possible Friday as the leftovers of the once fearsome Category 4 hurricane, now a tropical depression, move eastward. Already, an apparent tornado tore through a church and homes in Arkansas. Forecasters said it could become a tropical storm again when it moves off the mid-Atlantic coast.

More than 750,000 homes and businesses were without power in Louisiana, Texas and Arkansas in the storm’s wake, according to poweroutage.us, which tracks utility reports. 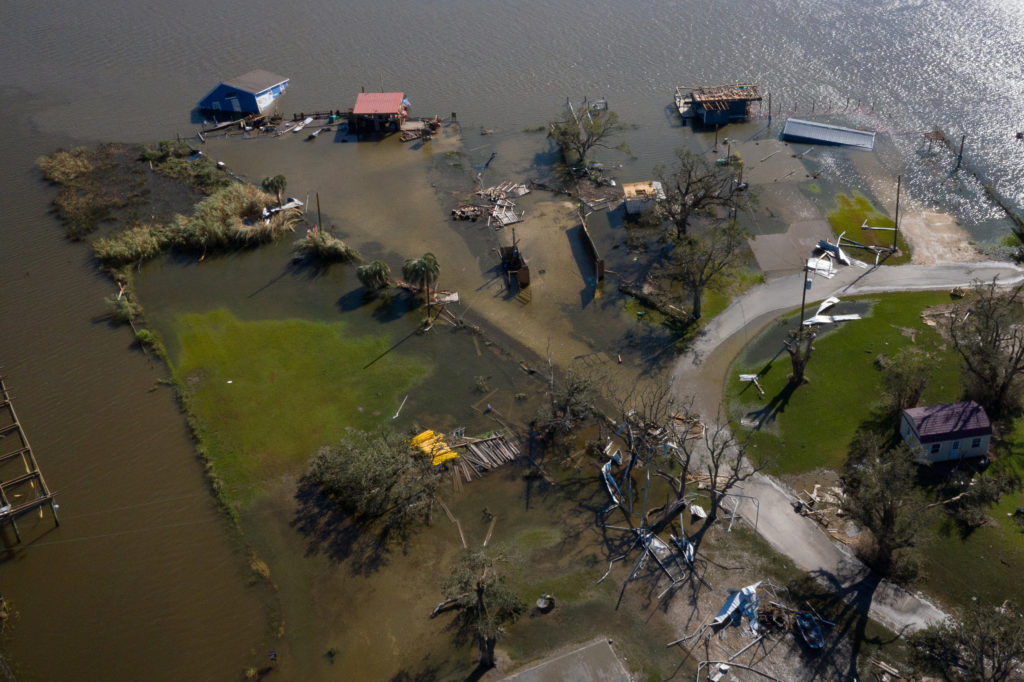 Homes lie destroyed and immersed in water in the aftermath of Hurricane Laura near Hackberry, Louisiana. Photo by Adrees Latif/Reuters

One of the strongest hurricanes ever to strike the United States, Laura was blamed for six deaths as it barreled ashore near the Louisiana-Texas state line.

A sense of relief prevailed that Laura was not the annihilating menace forecasters had feared, but a full assessment of the damage could take days. Entire neighborhoods were submerged and ruined along the coast. Thunderstorms and sizzling heat were expected in the disaster area on Friday, complicating recovery efforts.

“It is clear that we did not sustain and suffer the absolute, catastrophic damage that we thought was likely,” Louisiana Gov. John Bel Edwards said. “But we have sustained a tremendous amount of damage.”

Finishing search and rescue efforts was a top priority, Edwards said, followed by efforts to find hotel or motel rooms for those unable to stay in their homes. Officials in Texas and Louisiana both sought to avoid traditional mass shelters to avoid spreading COVID-19.

Edwards called Laura the most powerful hurricane to strike Louisiana, meaning it surpassed even Katrina, which was a Category 3 storm when it hit in 2005. 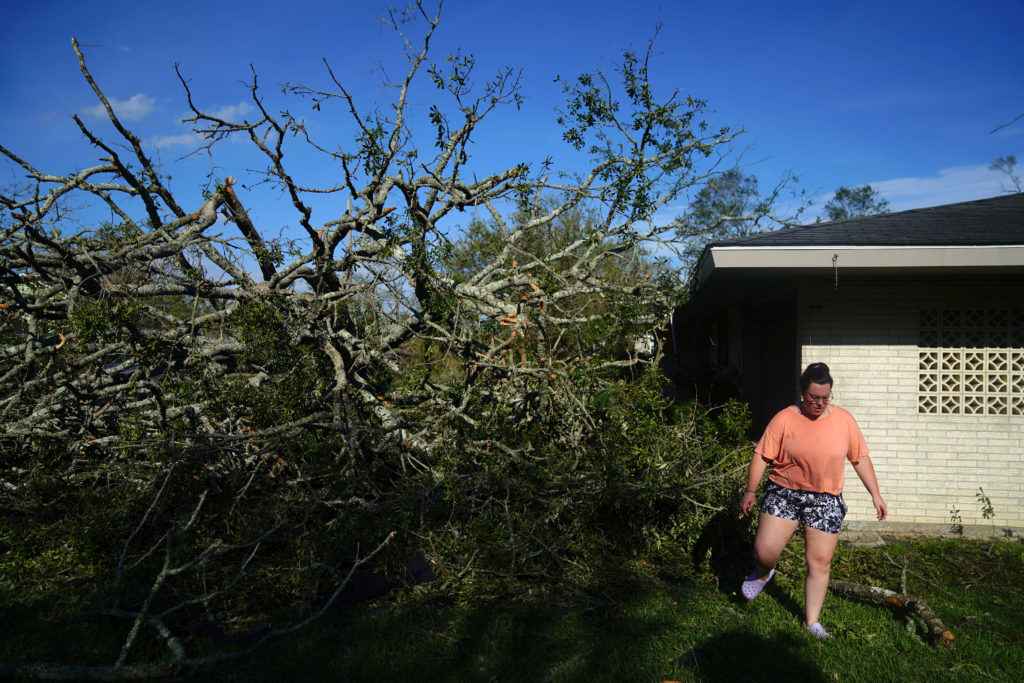 The hurricane’s top wind speed of 150 mph (241 kph) put it among the strongest systems on record in the U.S. Not until 11 hours after landfall did Laura finally lose hurricane status as it plowed north and thrashed Arkansas, and up until Thursday evening it remained a tropical storm, with sustained winds of 40 mph (65 kph) and spawning tornadoes.

Pastor Steve Hinkle surveyed the damage after a tornado gutted his Refuge Church in Lake City, Arkansas: An outdoor pavilion was reduced to rubble. A brick shed was shredded. The fellowship and family life center was a tangle of bent metal beams. Yellow insulation littered the churchyard.

“It skipped right over the house and hit every other building that the church has other than us,” Hinkle said. “We’re blessed.”

The family huddled into the parsonage’s bathroom after seeing transformers blowing out in the distance late Thursday. The storm shook their home, but after about 30 seconds, it was over.

“My wife walks out the front door and looks over by the church and says ‘The sign is missing.’ Then she turned the corner and started crying,” Hinkle said. It was the second time the church had been gutted by tornadoes, he added. 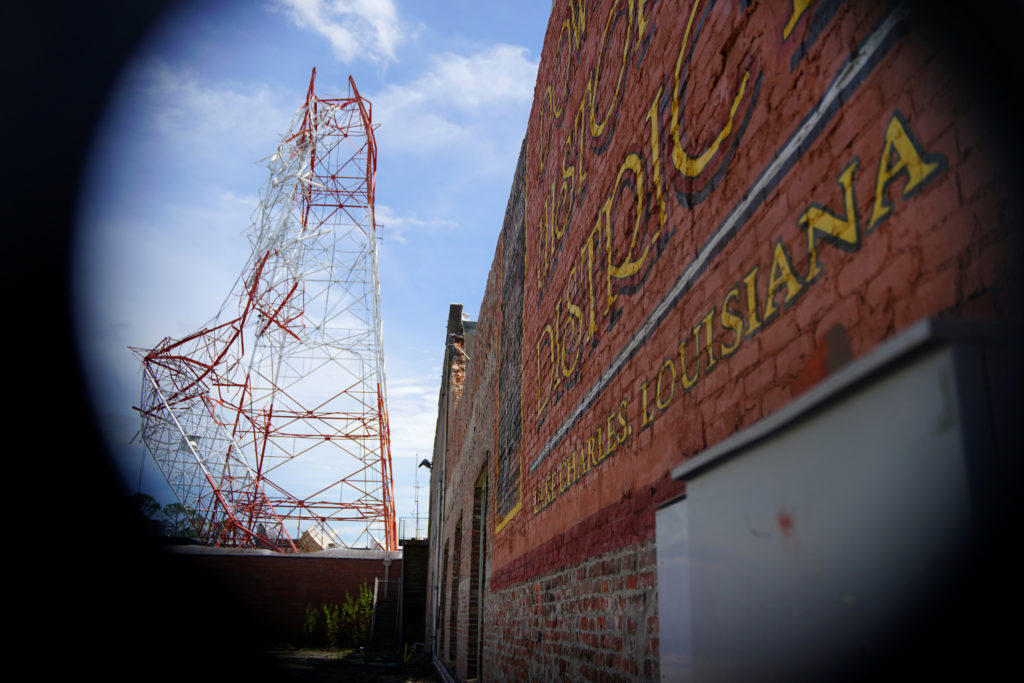 The storm crashed ashore in low-lying Louisiana and clobbered Lake Charles, an industrial and casino city of 80,000 people. On Broad Street, many buildings partially collapsed. Windows were blown out, awnings ripped away and trees split in eerily misshapen ways. A floating casino came unmoored and hit a bridge, and small planes were thrown atop each other at the airport. A television station’s tower toppled.

Laura also felled a Confederate statue that local officials voted to keep in front of a courthouse just days earlier.

“It looks like 1,000 tornadoes went through here. It’s just destruction everywhere,” said Brett Geymann, who rode out the storm with three relatives in Moss Bluff, near Lake Charles. He described a roar like a jet engine as Laura passed over his house around 2 a.m.

“There are houses that are totally gone,” he said.

The extent of the damage was just coming into focus when a massive plume of smoke began rising from a chemical plant outside Lake Charles. Police said the leak was at a facility run by Biolab, which manufactures chemicals used in household cleaners and chlorine powder for pools. Nearby residents were told to close their doors and windows, and the fire smoldered into the night. 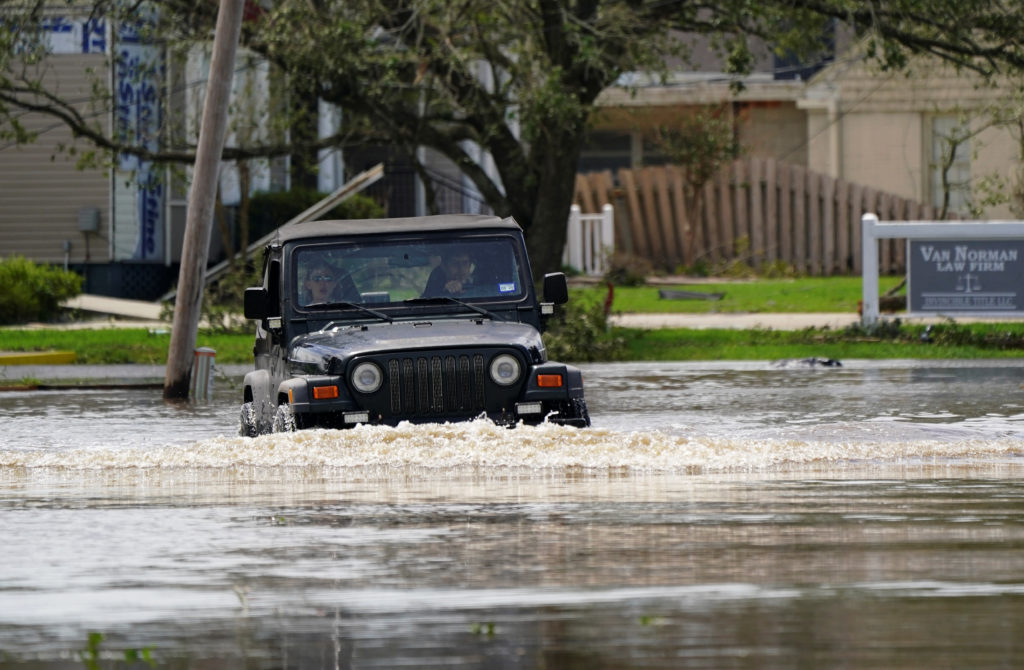 People drive their car through a flooded street after Hurricane Laura passed through Lake Charles, Louisiana. Photo by Elijah Nouvelage/Reuters

Four people were killed by falling trees in Louisiana, including a 14-year-old girl and a 68-year-old man. A 24-year-old man died of carbon monoxide poisoning from a generator inside his residence. Another man drowned in a boat that sank during the storm, authorities said. No deaths were confirmed in Texas, which Gov. Greg Abbott called “a miracle.”

Chevellce Dunn considers herself fortunate. She spent the night huddling on a sofa with her son, daughter and four nieces and nephews as winds rocked their home in Orange, Texas. Now she’s without power in the sweltering heat.

More than 580,000 coastal residents evacuated despite fears of coronavirus infections. It’s unclear when their journeys might end. There’s no electricity or running water in many places, including Lake Charles, a city of 80,000, and the coastal towns of Cameron and Holly Beach were swamped by the storm surge. Restoring essential services could take weeks.

“People who are outside of Lake Charles, thinking about coming back, they need to be really blunt with themselves about the harsh reality of what they’re coming back to,” Mayor Nic Hunter told NBC’s Today show Friday. “I’m sorry about that, but we just got hit with the largest hurricane to hit Louisiana in the last 150 years.”

A lower-than-expected storm surge also helped save lives. Edwards said ocean water rose as much as 12 feet (4 meters) rather than the 20 feet (6 meters) that was predicted.

Bucky Millet, 78, of Lake Arthur, Louisiana, considered evacuating but decided because of the coronavirus to ride out the storm with family. He thought the roof of his house would disappear at one point when a small tornado blew the cover off the bed of his pickup.

“You’d hear a crack and a boom and everything shaking,” he said.

Laura’s winds blew out every living room window in the Lake Charles house where Bethany Agosto huddled in a closet with her sister and two others. “It was like a jigsaw puzzle … we were on top of each other, just holding each other and crying.”

Laura was the seventh named storm to strike the U.S. this year, setting a new record for U.S. landfalls by the end of August. Laura hit the U.S. after killing nearly two dozen people in Haiti and the Dominican Republic.

President Donald Trump planned to visit the Gulf Coast this weekend to tour the damage.