As the U.S. flag flew at half-staff to honor the life and contributions of Justice Ruth Bader Ginsburg, who died on Friday due to complications of metastatic pancreatic cancer, tributes poured in from politicians, colleagues, celebrities and Americans.

The second woman to serve on the Supreme Court, Justice Ginsburg was a legal trailblazer, cultural icon and champion of women’s rights whose life and storied career has been the subject of books and films. 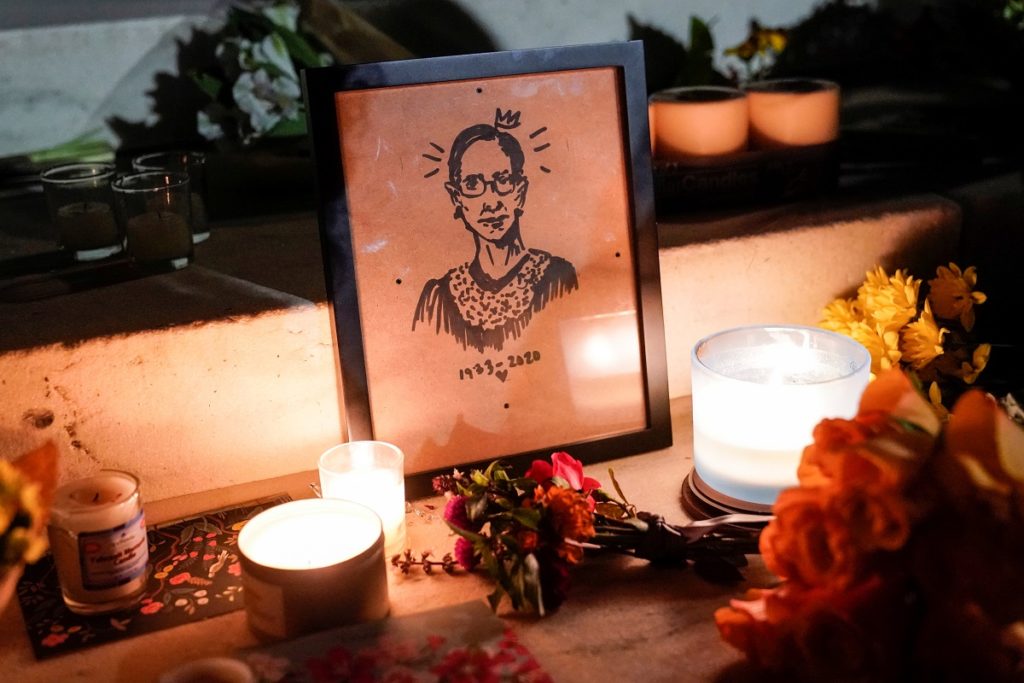 Candles are lit next an illustration of Associate Justice Ruth Bader Ginsburg as people mourn her death at the Supreme Court in Washington, U.S., September 19, 2020. Photo by Joshua Roberts, Reuters.

Soon after her death was announced mourners gathered around the country at informal memorials to honor RBG’s life and legacy, Reuters reported. At the Supreme Court, where she spent 27 years, people gathered at the plaza, lighting candles, leaving flowers and notes, and singing “Amazing Grace,” The New York Times reported.

President Trump, who said he heard about her passing after a campaign rally in Minnesota, called the liberal stalwart “an amazing woman” when he talked to reporters after the event. Later, in his statement he said, “Justice Ginsburg demonstrated that one can disagree without being disagreeable toward one’s colleagues or different points of view,” calling her “a titan of the law.”

Vice President Joe Biden and Democratic nominee, who heard the news while on a flight, called her a “beloved figure” while hailing her persistence in overcoming gender discrimination and fighting for women’s rights. “It’s hard to believe it is my honor to preside over her confirmation hearing,” he said, adding that her seat should not be filled till after the election.

As the two political parties prepare for a nomination fight, Justice Ginsburg’s passing has already galvanized the Democratic Party’s base. According to a donation ticker on ActBlue, the party raised more than $31 million in the hours following the death of her news. 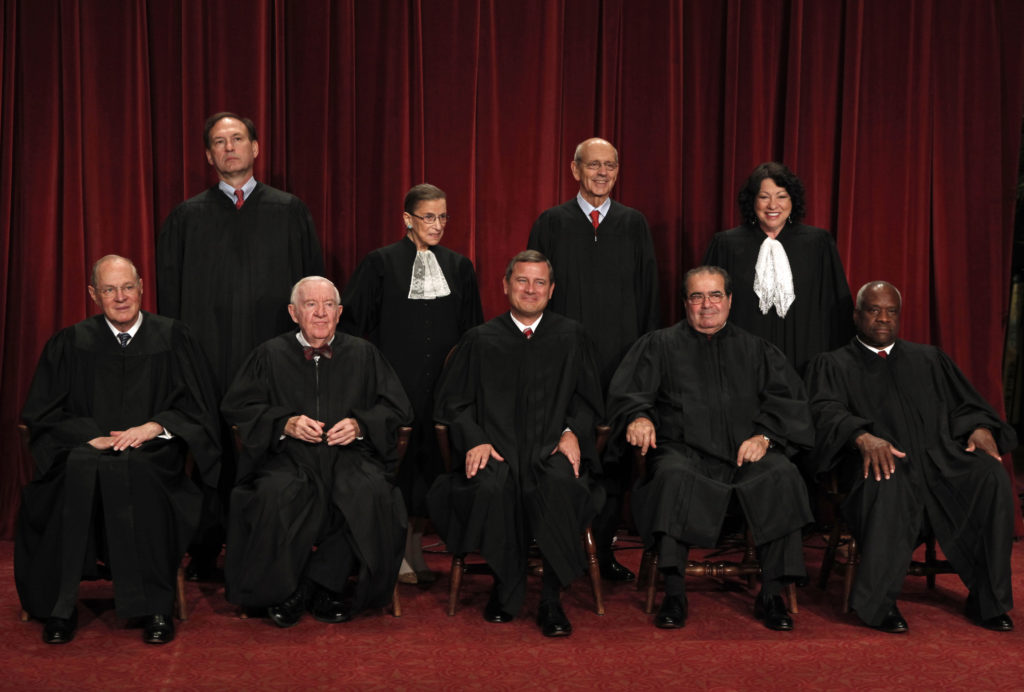 Calling her a “jurist of historic stature,” Chief Justice Roberts said, “Today we mourn, but with confidence that future generations will remember Ruth Bader Ginsburg as we knew her – a tireless and resolute champion of justice.”

Her SCOTUS colleagues also shared their grief. In an emotional statement, Justice Clarence Thomas, who served with RBG for nearly 27 years, wrote, “As outstanding as she was as a judge, she was an even better colleague – unfailingly gracious, thoughtful, and civil,” adding that he will dearly miss his friend.

While Justice Stephen Breyer wrote, “The world is a better place for her having lived in it,” Justice Neil Gorsuch recalled their trip to London, her love for opera and sweet tooth. 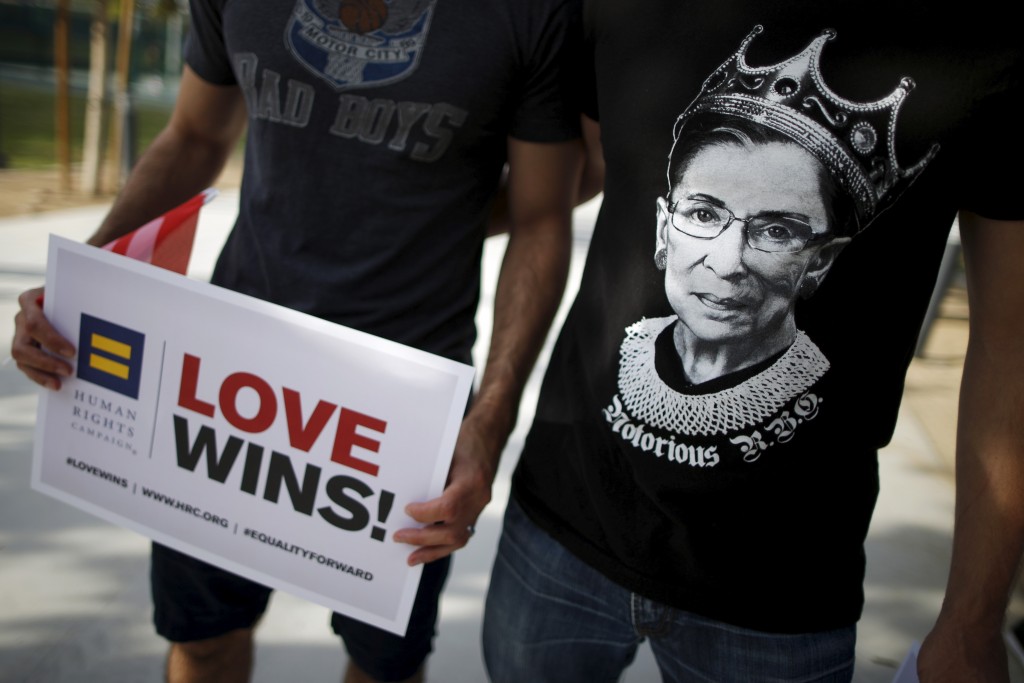 Former First Lady and 2016 Democratic candidate for President, Hillary Clinton, whose husband, former President Bill Clinton had appointed Justice Ginsburg to the Supreme Court tweeted, “Justice Ginsburg paved the way for so many women, including me.”

Singer Mariah Carey tweeted, “Thank you for a lifetime of service. Thank you for changing history.” Producer and actor Mindy Kaling eulogized the Justice saying she was “The kind of person who you say “who knows, one day you could be HER”. I hope you rest well, RBG, you must have been tired from changing the world.”
Actress and singer Jeniffer Lopez shared photos of her with Justice Ginsburg and wrote, “She was a true champion of gender equality and was a strong woman for me and all the little girls of the world to look up to.”

“RBG,” a 2018 CNN Films documentary, which also earned an Oscar nomination, will air on Saturday and Sunday on CNN in her honor. The film, which chronicles Justice Ginsburg’s childhood, legal career and personal life, is also available for streaming.

Time Magazine, which featured the late Justice in its “100 Most Influential People in the World” list in 2015, will be paying a tribute by featuring RBG on one of its multiple covers for an October double issue.

A statue honoring Justice Ginsburg’s life and legacy will be built in Brooklyn, New York where she was born and raised, Gov. Andrew Cuomo announced on Saturday. He will appoint a commission to choose the artist and the location for the memorial.