SEATTLE — A construction crane fell from a building on Google’s new Seattle campus during a storm that brought wind gusts, crashing down onto one of the city’s busiest streets and killing four people.

One female and three males had died by the time firefighters had arrived Saturday afternoon, Fire Chief Harold Scoggins said. Two of the dead were ironworkers who had been inside the crane while the other two were people who were inside cars, Fire Department spokesman Lance Garland said.

A 25-year-old mother and her 4-month-old daughter were in a car that was smashed by the crane on its passenger side, and both managed to escape with only minor injuries, Seattle Mayor Jenny Durkan said, calling it a miracle. They and a 28-year-old man were taken to Harborview Medical Center. A fourth person also was injured and treated at the scene.

The crane collapsed near the often-congested intersection of Mercer and Fairview Avenue just north of downtown in the South Lake Union neighborhood shortly before 3:30 p.m., Scoggins said. 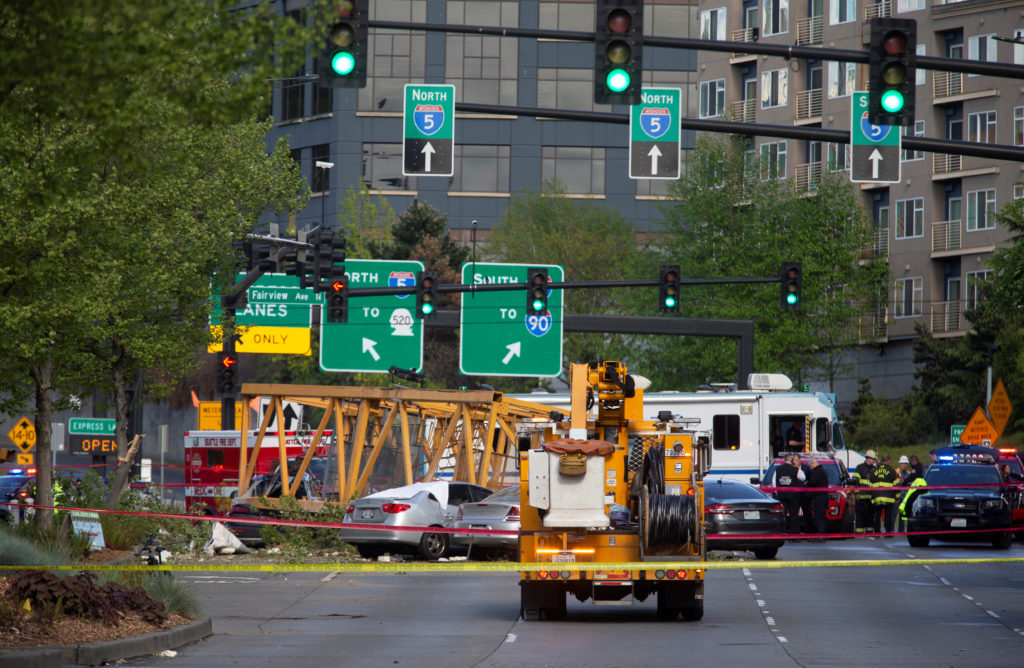 Seattle emergency personnel view part of a construction crane which fell onto cars on Mercer Street, killing people and injuring others, in Seattle, Washington, U.S. April 27, 2019. Photo By Lindsey Wasson/Reuters

The deadly collapse is sure to bring scrutiny about the safety of the dozens of cranes that dot the city’s skyscape. With Amazon, Google and other tech companies increasing their hiring in Seattle, the city has more cranes building office towers and apartment buildings than any other in the United States. As of January, there were about 60 construction cranes in Seattle.

Durkan said the city had a good track record with crane safety but that officials would conduct a review. “It’s a horrible day in Seattle when something like this happens. But it’s a time when we come together because Seattle is a city that rallies around each other,” she said.

Officials do not yet know the cause of the collapse. Police and the state Department of Labor and Industries were investigating, which Durkan said could take months.

Daren Konopaski, the business manager for the International Union of Operating Engineers Local 302, which represents heavy-equipment operators, told The Seattle Times he understood the crane was being dismantled when high winds moved through the area.

“We don’t know, but that’s what seems to have happened here,” he said. “We are in the process of trying to get information.”

Durkan confirmed that people were actively working on top of the building Saturday, but she didn’t say whether the crane was being dismantled.

“It was terrifying,” witness Esther Nelson, a biotech researcher who was working in a building nearby, told the Times.

“The wind was blowing really strong,” she said, and added that the crane appeared to break in half. “Half of it was flying down sideways on the building,” she said. “The other half fell down on the street, crossing both lanes of traffic.” 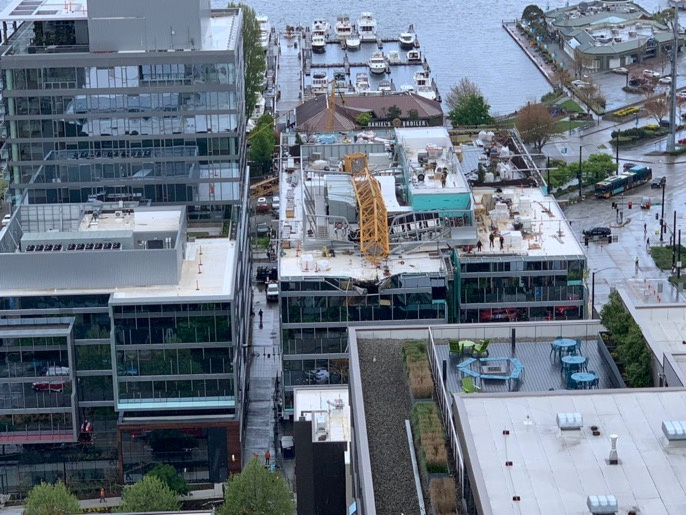 Damage after a construction crane collapsed is seen on the roof of a building in Seattle, Washington, U.S. April 27, 2019, in this picture obtained from social media. Photo By Chad Tillekeratne via Reuters

The office building the crane fell from was badly damaged, with several of its windows smashed.

A Google spokesperson said in a statement that the company was saddened to learn of the accident and that they were in communication with Vulcan, the real estate firm that is managing the site and working with authorities.

Harborview spokeswoman Susan Gregg said Saturday night that the mother and baby had been discharged, while the man injured was in satisfactory condition.

The King County Medical Examiner’s Office said it would not release names of people who died until Monday.

A crane collapsed in the Seattle suburb of Bellevue in 2006, damaging three neighboring buildings and killing a Microsoft attorney who was sitting in his living room. The state Department of Labor and Industries cited two companies for workplace-safety violations after an investigation that found a flawed design for the crane’s base.

“Trudi and I join all Washingtonians in extending our deepest condolences to the family and friends of the four people who died in this afternoon’s tragic accident,” Washington state Gov. Jay Inslee said in a statement. Inslee also said he hoped for a speedy and full recovery for those injured, thanked first responders and urged people to stay clear of the accident scene.

Left: A member of the Seattle police department inspects one of the cars crushed by part of a construction crane on Mercer Street, which killed four people and injured several others in Seattle, Washington, U.S. April 27, 2019. Photo By Lindsey Wasson/Reuters