AMPARA, Sri Lanka — Sri Lanka’s Catholics celebrated Mass in their homes via a televised broadcast on Sunday as churches across the island nation shut over fears of militant attacks, a week after the Islamic State-claimed Easter suicide bombings killed over 250 people.

Cardinal Malcolm Ranjith, the archbishop of Colombo, delivered a homily before members of the clergy and the country’s leaders in a small chapel at his Colombo residence — an extraordinary measure underlining the fear still gripping this nation of 21 million people.

No mass at St Anthony's today so these devoted parishioners gathered on the streets outside to say their prayers, sing their hymns and pay respects to the victims of Sri Lanka's Easter Sunday bombings pic.twitter.com/c7DVr0BTgd

“Everything is falling apart because of this issue. Business is almost nonexistent… That is how we are living right now.” – vendor Chandima Krishanthi

“This is a time our hearts are tested by the great destruction that took place last Sunday,” Ranjith said. “This is a time questions such as, does God truly love us, does he have compassion toward us, can arise in human hearts.”

In a rare show of unity, President Maithripala Sirisena, Prime Minister Ranil Wickremesinghe and opposition leader Mahinda Rajapaksa attended the Mass. Their political rivalry and government dysfunction are blamed for a failure to act upon near-specific information received from foreign intelligence agencies that preceded the bombings, which targeted three churches and three luxury hotels.

Police, meanwhile, entered the main mosque of National Towheed Jamaat on Sunday afternoon, just a day after authorities declared it and another organization terror groups over the bombings. 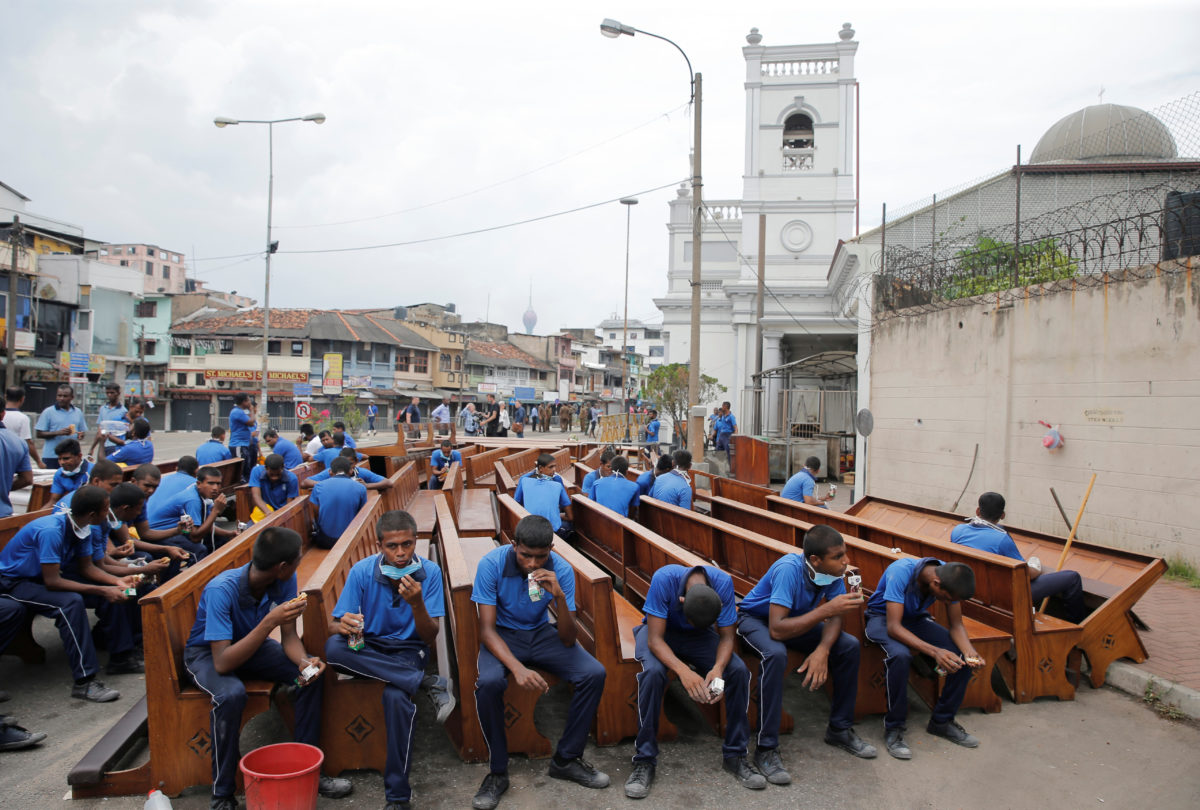 Workers sit on pews as they take a break from repairs outside St. Anthony’s Shrine a week after a string of suicide bomb attacks across the island on Easter Sunday, in Colombo, Sri Lanka April 28, 2019. Photo by Thomas Peter/Reuters

Police entered the mosque, located in Kattankudy in eastern Sri Lanka, and stopped an interview among foreign journalists and mosque officials. Later, a senior police officer dispersed journalists waiting outside, saying authorities were conducting a “cordon and search operation.”

Police then left, locking up the mosque just before afternoon prayers were to start.

Authorities banned National Towheed Jamaat over its ties to Mohammed Zahran, the alleged mastermind of the Easter attacks.

Police also announced the arrests of two of five people wanted in connection with the attacks after their pictures were distributed publicly.

Police spokesman Ruwan Gunasekara said the two, Mohamed Ivuhayim Shahid Abdul Haq and Mohamed Ivuhayim Sadiq Abdul Haq, were arrested in Nawalapitiya, 125 kilometers (77 miles) east of Colombo, the capital. The three others, all women, remain at large. Police did not elaborate on what roles they may have played.

In the eastern district of Ampara, where a gunfight and explosions left 15 people dead following a police raid on Friday, soldiers guarded St. Mary Magdalen’s Church. A sign on the gate said the church and the school would be closed until May 6. A nearby mosque also had soldiers stationed outside. 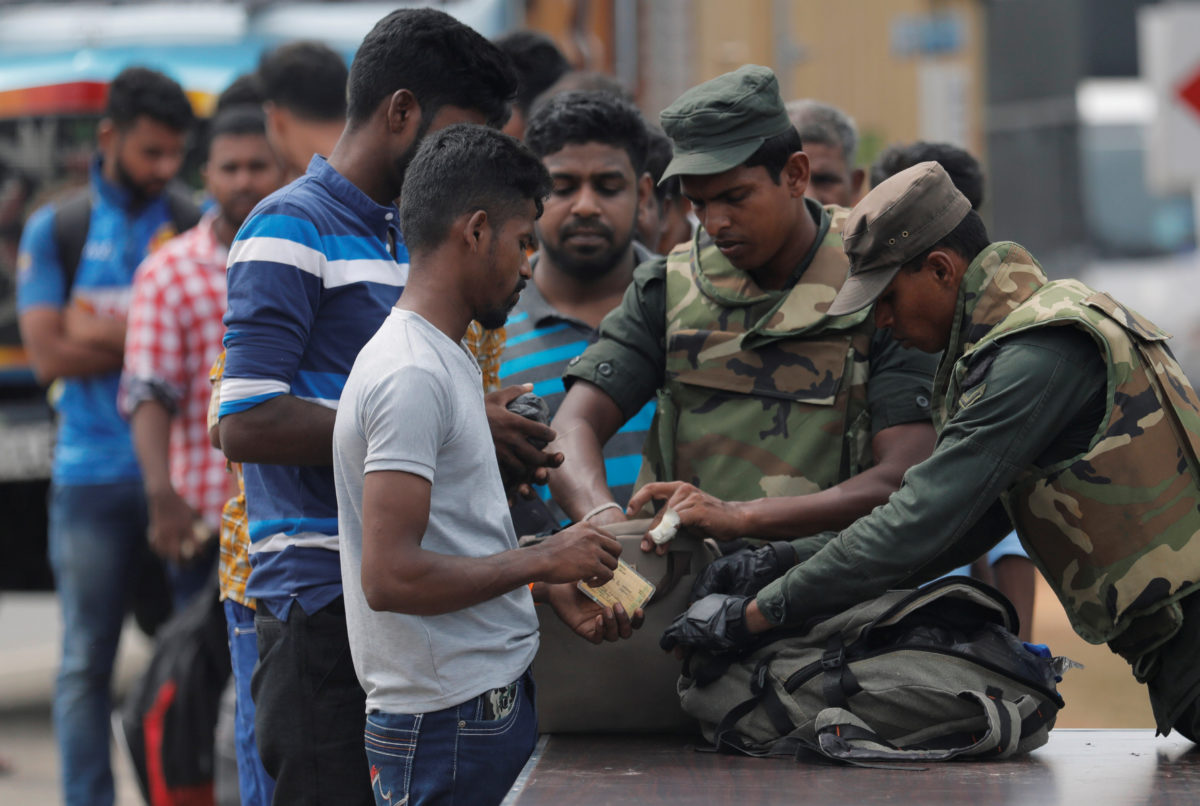 At the YMCA, a group of young girls held Sunday school near a portrait of Christ. Sajith Liyanage, a 51-year-old Catholic, said he remained worried and would watch Mass on TV.

“We can’t understand what the situation is right now,” Liyanage said.

“Everything is falling apart because of this issue. Business is almost nonexistent,” said vendor Chandima Krishanthi. “That is how we are living right now.”

“Even though the security forces are here, it’s not like earlier. We are living in fear. It’s nothing like it used to be,” she said. 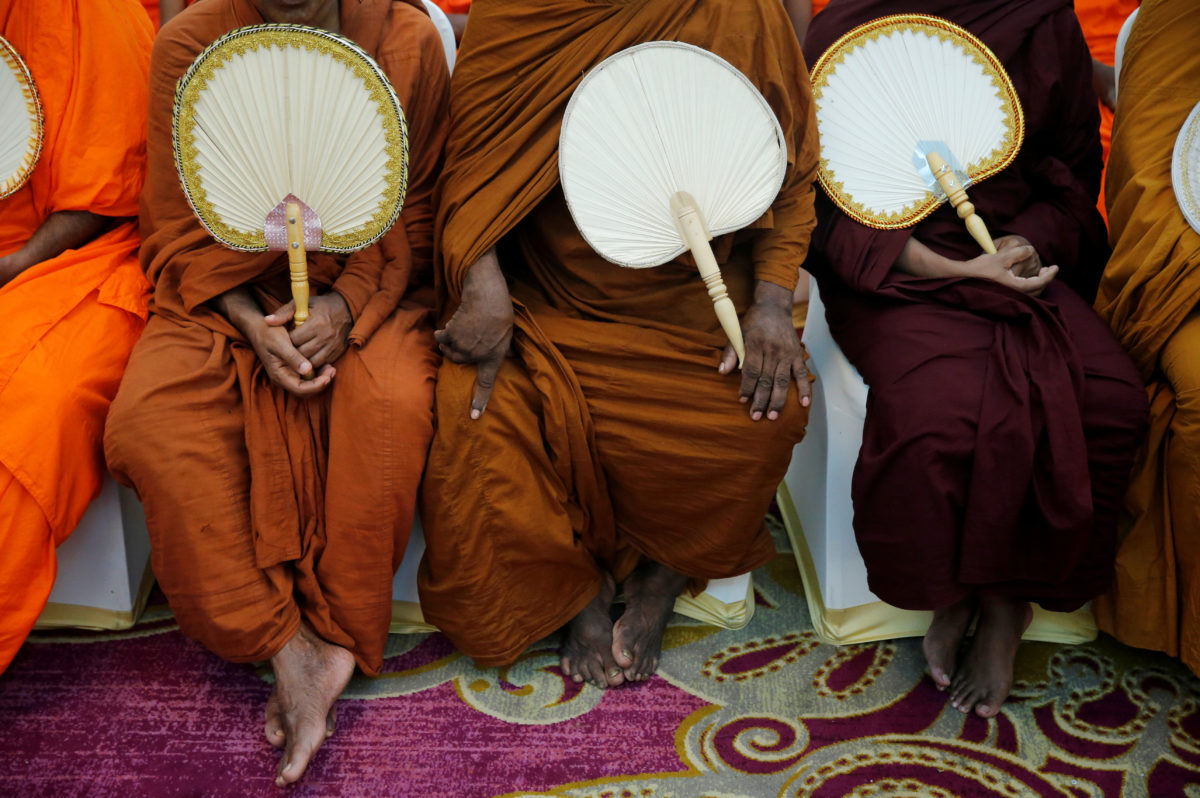 Monks take part in a Buddhist ceremony as a tribute to victims, a week after a string of suicide bomb attacks across the island on Easter Sunday, at Kingsbury Hotel in Colombo, Sri Lanka April 28, 2019. Photo by Thomas Peter/Reuters

The Islamic State group claimed three of the militants who blew themselves up during the police raid in Ampara.

In a statement carried by the extremists’ Aamaq news agency, IS identified the bombers by their noms du guerre as Abu Hammad, Abu Sufyan and Abu al-Qa’qa. It said they opened fire with automatic weapons and “after exhausting their ammunition, detonated … their explosive belts.”

Sri Lanka’s military said the gunfight Friday night near the town of Sammanthurai left 15 dead, including six children, when militants opened fire and set off explosives in suicide bombings as security forces closed in on their safe house.

At the main police station in Ampara, an outdoor stage now holds what police recovered after the firefight. The IS-aligned militants had created a bomb-making factory at the home, complete with laboratory-style beakers and thick rubber gloves. 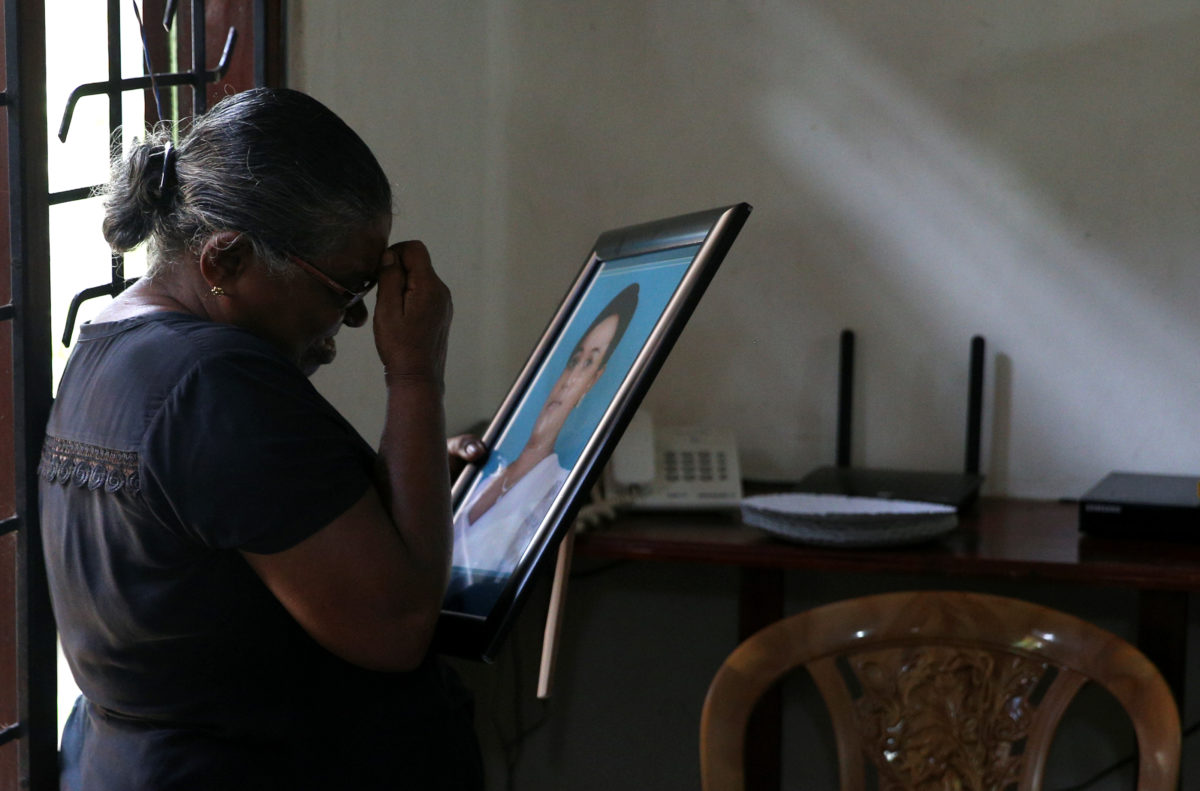 Theresha Binish, 65, who lost her daughter and 3 grand children, mourns for them at her home, a week after a string of suicide bomb attacks across the island on Easter Sunday, in Negombo, Sri Lanka April 28, 2019. Photo by Athit Perawongmetha/Reuters

A police investigator, who spoke to The Associated Press on condition of anonymity because he wasn’t authorized to publicly comment, said the mix of acids worsened the wounds suffered by those who didn’t immediately die in the blast.

“At the hospital a lot more people died. That’s why,” he said, nodding toward the acids. “It made the wounds incurable.”

The bombers likely carried two rectangular detonators in their pockets similar to the ones recovered, the investigator said. A red switch armed the explosives, while a light teal button detonated the bombs hidden inside of their large backpacks. 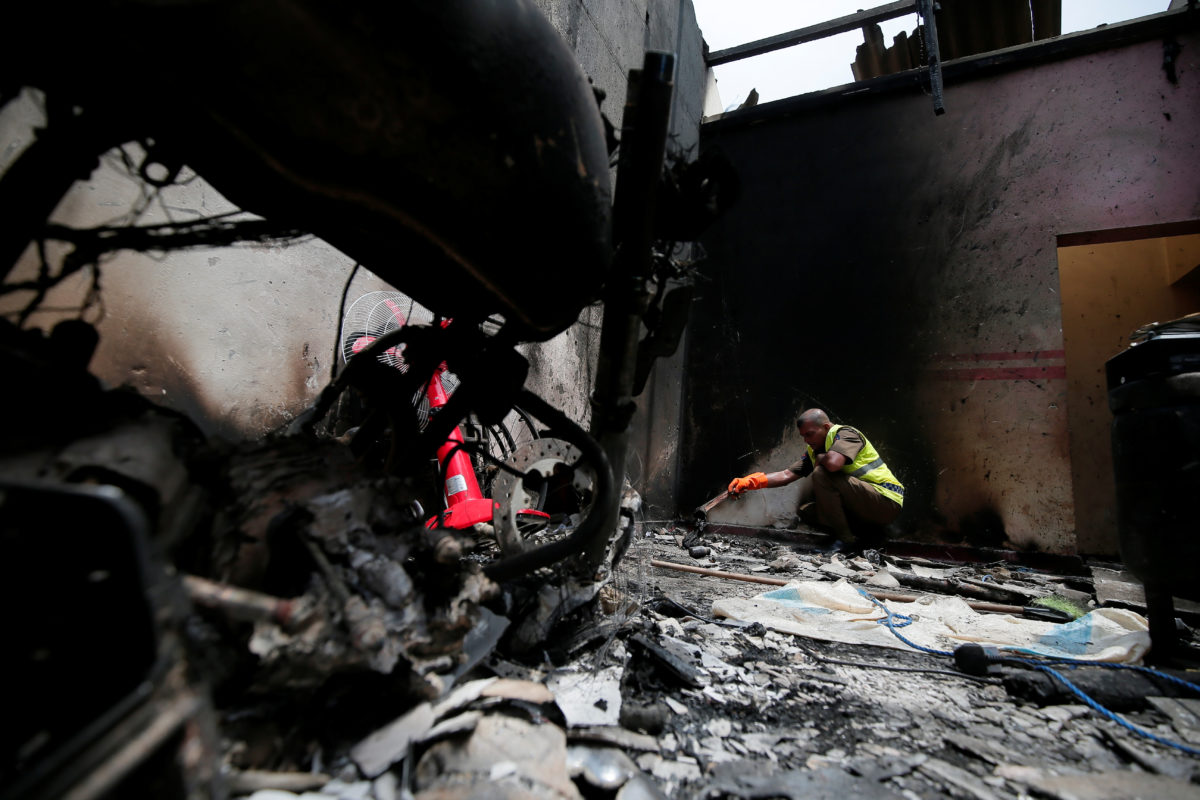 A police officer inspects the site of a gun battle between troops and suspected Islamist militants, on the east coast of Sri Lanka, in Kalmunai, April 28, 2019. Photo by Dinuka Liyanawatte/Reuters

Along with the acids, the bombs contained a mixture of fertilizer, gunpowder, ball bearings and explosives typically used by quarries to blast loose rocks, the investigator said. Those explosives made the bombs powerful enough to blow the roof off of St. Sebastian’s Church in Negombo, he said, referring to one of the churches near Colombo targeted in the Easter attacks.

The Sri Lankan navy controls the sale of the mining explosives and investigators already have begun tracing the serial numbers off of the plastic sticks, he said. A notebook contained bomb-making instructions that had apparently been explained to the writer.

Sri Lanka is majority Buddhist but has significant Hindu and Muslim populations. About 7% are Christian, and most are Roman Catholic.