Tornadoes leave trail of damage across Ohio and Indiana

BROOKVILLE, Ohio (AP) — A swarm of apparent tornadoes so tightly packed that one may have crossed the path carved by another tore across Indiana and Ohio overnight, smashing homes and blowing out windows. One person was killed and dozens were injured.

The storms were among 53 twisters that forecasters said may have touched down Monday across eight states stretching eastward from Idaho and Colorado.

The winds knocked houses off their foundations, toppled trees and hurled so much debris that it could be seen on radar. Highway crews had to use snowplows to clear an Ohio interstate.

Some of the heaviest damage was reported just outside Dayton, Ohio.

“I just got down on all fours and covered my head with my hands,” said Francis Dutmers, who with his wife headed for the basement of their home in Vandalia, about 10 miles (16 kilometers) outside Dayton, when the storm hit with a “very loud roar” Monday night. The winds blew out windows around his house, filled rooms with debris and took down most of his trees. 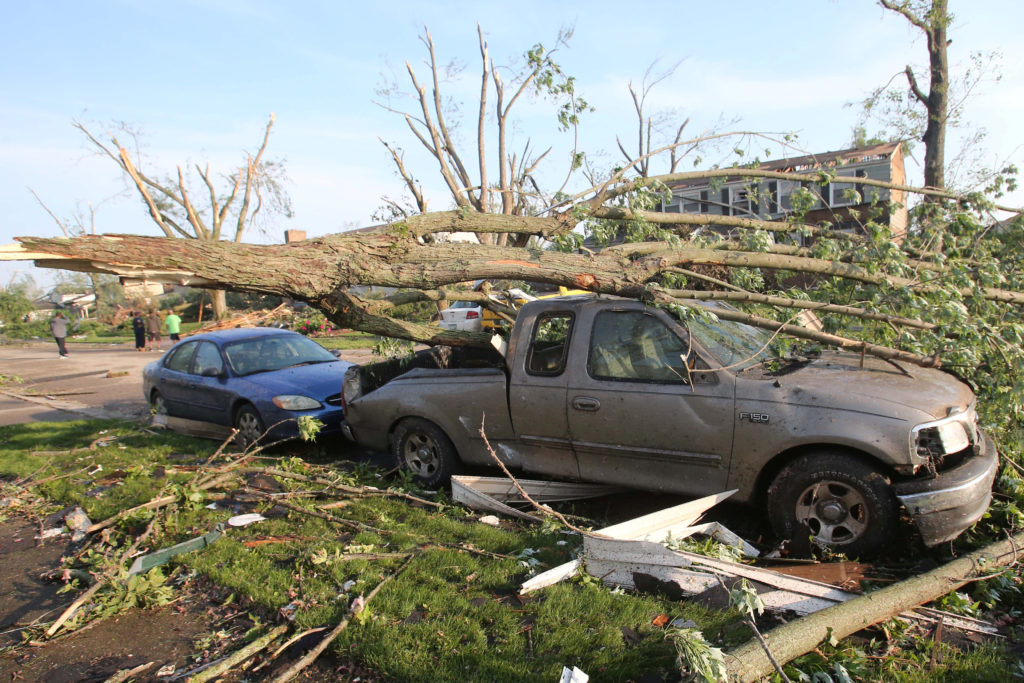 A car and truck sit under a fallen tree the morning after a tornado touched down overnight in Trotwood near Dayton, Ohio, on May 28, 2019. Photo by Aaron Josefczyk/Reuters

Storm reports posted online by the National Oceanic and Atmospheric Administration’s Storm Prediction Center showed that 14 suspected tornadoes touched down in Indiana, 11 in Colorado and nine in Ohio. Six suspected tornadoes were reported in Iowa, five in Nebraska, four in Illinois, three in Minnesota and one in Idaho.

Thunderstorms that spun off the Colorado twisters dropped hail as large as tennis balls, with pea-size hail reported in the Denver area. In Nebraska, which was hit with hail more than 2 inches in diameter, dozens of drivers pulled off Interstate 80 with broken windshields.

Forecasters warned of the possibility of powerful thunderstorms during the Tuesday afternoon rush hour in the Kansas City area, as well as more bad weather in Ohio.

A tornado with winds up to 140 mph (225 kph) struck near Trotwood, Ohio, eight miles (12 kilometers) from Dayton, and Mayor Mary McDonald reported “catastrophic damage” in the community of 24,500 people. Several apartment buildings were damaged or destroyed, including one complex where the entire roof was torn away, and at least three dozen people were treated at emergency rooms for cuts, bumps and bruises.

“If I didn’t move quick enough, what could have happened?” said Erica Bohannon of Trotwood, who hid in a closet with her son and their dog. She emerged to find itself looking at the sky. The roof had blown away.

The Trotwood mayor said five busloads of displaced residents were taken to a church that opened as a shelter. 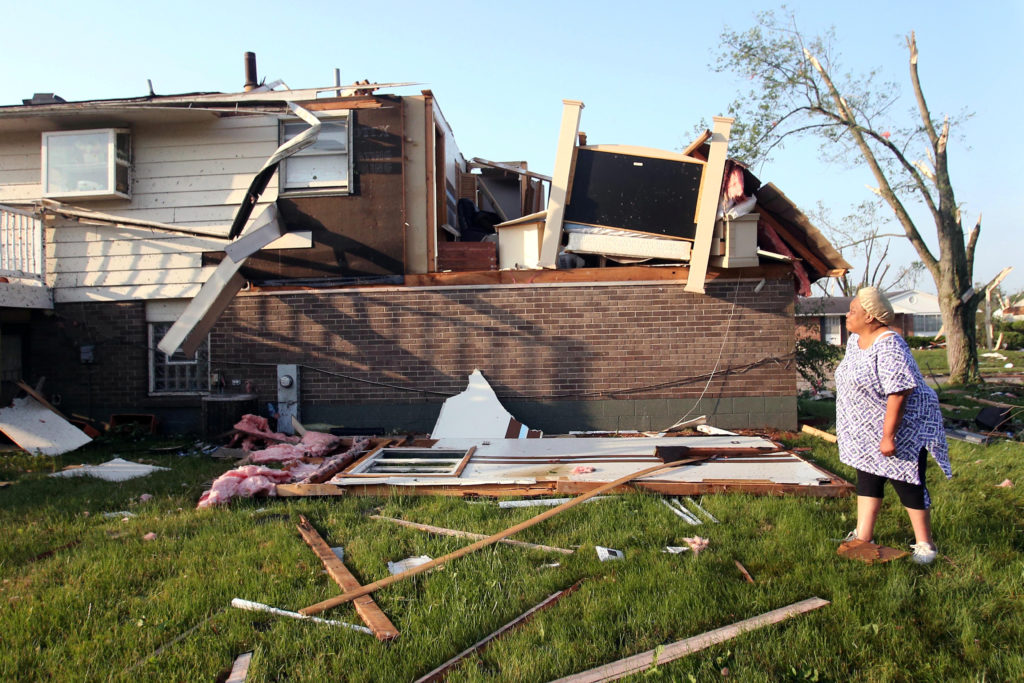 Deletha Shepard looks at what is left of her house in the morning after a tornado touched down overnight in Trotwood near Dayton, Ohio. Photo by Aaron Josefczyk/Reuters

Just before midnight, about 40 minutes after that tornado cut through, the weather service tweeted that another one was crossing its path, churning up enough debris to be visible on radar.

In Brookville, west of Dayton, the storm peeled roofs off schools, destroyed a barn and heavily damaged houses.

In Dayton, only a few minor injuries were reported. Fire Chief Jeffrey Payne called that “pretty miraculous,” attributing it to people heeding early warnings. Sirens went off ahead of the storm.

Mayor Nan Whaley urged people to check on their neighbors, especially those who are housebound. A boil-water advisory was issued after the storms knocked out power to Dayton’s pumping stations, and Dayton Power & Light said 64,000 customers were left without electricity.

Many roads in the Dayton area were impassable. A high school gymnasium in Dayton was designated an emergency shelter until authorities realized it was unusable.

In Indiana, a twister touched down Monday evening in Pendleton, about 35 miles (56 kilometers) from Indianapolis. At least 75 homes were damaged there and in nearby Huntsville, said Madison County Emergency Management spokesman Todd Harmeson. No serious injuries were reported.

Pendleton residents were urged to stay in their homes Tuesday morning because of downed trees, wires and utility poles. 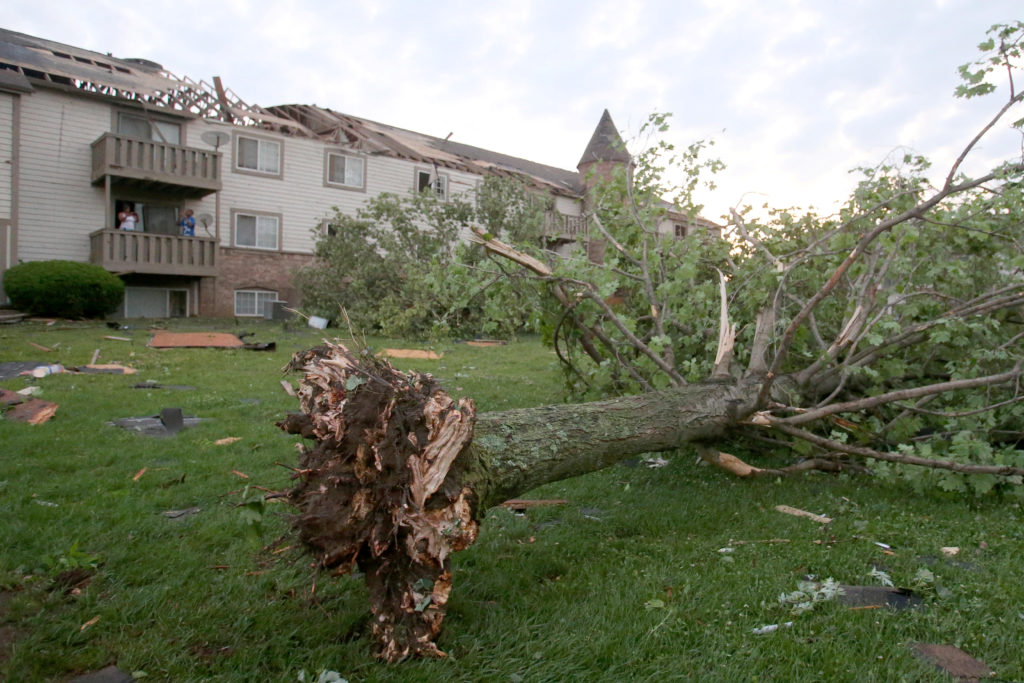 A fallen tree lays in the grass in front of heavily damaged apartment buildings after a tornado touched down overnight in Trotwood near Dayton, Ohio. Photo by Aaron Josefczyk/Reuters

Outbreaks of 50 or more tornadoes have happened 63 times in U.S. history, with three instances on record of more than 100 twisters, said Patrick Marsh of the Storm Prediction Center. That includes a deadly April 27, 2011, “super outbreak” of 173 tornadoes.

Left: A man walks through the scattered debri outside his apartment building in the morning after a tornado touched down overnight in Trotwood near Dayton, Ohio, on May 28, 2019. Photo by Aaron Josefczyk/Reuters