NOAA predicts a ‘near-normal’ hurricane season. Here’s what that means

The National Oceanic and Atmospheric Administration is predicting a relatively “normal” hurricane season, which begins June 1 and runs through November.

Scientists expect between nine and 15 named tropical storms or hurricanes, a distinction bestowed when winds reach 39 miles per hour or higher. Of those expected storms, four to eight are likely to become hurricanes — half of which may become major hurricanes, meaning they are Category 3 with winds at least 111 miles per hour.

The predictions are coming off two active years for Atlantic storms. Hurricane activity last year was slightly above historical averages with 15 named storms, and 2017 was among the top 10 most active Atlantic hurricane seasons on record, marked by the devastating Hurricanes Harvey, Irma and Maria.

But before that, the U.S. had experienced 12 years without a major hurricane hitting its coastline.

The presence of an El Niño climate pattern, while relatively weak this year, is expected to suppress storms. These forces are battling a stronger African monsoon season and higher sea surface temperatures in the Atlantic, both of which encourage storm activity. The latter has persisted since 1995 because of a climate pattern known as Atlantic multidecadal oscillation.

Combined, the conditions offset each other to produce a “near-normal” hurricane season, Jacobs said.

What NOAA learned from 2018

Two major hurricanes — Michael and Florence — hit Florida and the Carolinas in 2018, but the outcomes differed dramatically because of the storms’ behavior.

Hurricane Michael was a fast-moving, Category 5 storm when it rammed through the Florida Panhandle with high winds over only a few hours, whereas Hurricane Florence stalled for four days over North Carolina and South Carolina, causing widespread flooding further inland.

Gerry Bell, the lead hurricane season forecaster with NOAA’s Climate Prediction Center, said that indicates people need to be prepared, not just for traditional hurricanes, but for a variety of scenarios depending on where they live.

“It only takes one landfalling hurricane to create great destruction to a community.”

Emergency officials encourage Americans in hurricane-prone areas to learn their local evacuation routes, acquire a backup means for communications and stock their houses with food and medical supplies.

Even as the next hurricane season begins, several regions are still recovering from tropical cyclones that struck over the past two years.

Disaster aid has been held up in Congress for months as Republican and Democratic lawmakers, along with the White House, struggled to agree on a deal.

The Senate approved a deal Thursday that would provide an additional $19 billion to communities and military installations affected by natural disasters in 2017 and 2018. The House of Representatives passed a similar bill in early May and must now approve the Senate version before it is sent to President Donald Trump.

The most costly hurricane season on record occurred in 2017. Hurricane Harvey, which struck Texas and Louisiana, caused $125 billion in damages, making it the second costliest hurricane in U.S. history after Hurricane Katrina. The estimated damages from Hurricanes Maria, which hit Puerto Rico, and Irma, which hit Florida, were an estimated $90 billion and $50 billion, respectively.

The regions have already received billions in disaster aid for a wide variety of projects including road and electricity repairs, as well as loans for businesses and homeowners. But local officials say more help is needed. 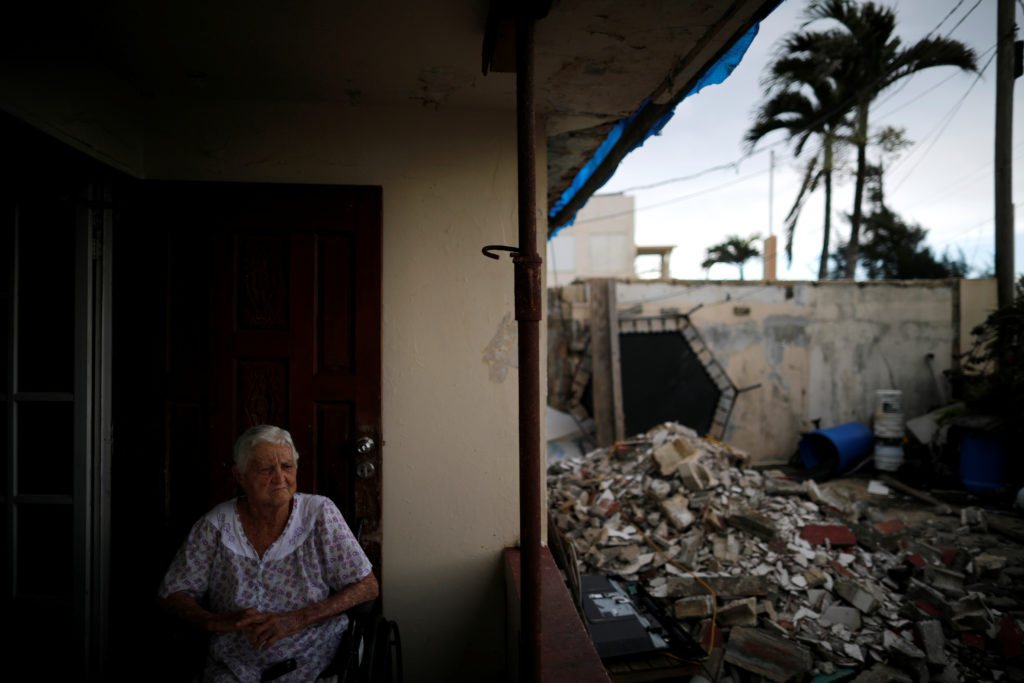 Lucila Cabrera, 86, sits at the porch of her damaged house by Hurricane Maria, a year after the storm devastated Puerto Rico, near Barceloneta, Puerto Rico. Picture taken September 18, 2018. Photo by Carlos Barria/Reuters

The federal government has allocated more than $42 billion to Puerto Rico’s recovery from Hurricane Maria — of which $12.6 billion has been spent so far, according to FEMA. Puerto Rican officials are calling for $139 billion to completely recover from the storm.

In Florida, the federal government has spent nearly $4 billion on Hurricane Irma recovery –approximately half of its total. City officials and volunteers say the Florida Keys are still facing a shortage of affordable housing a year and a half after Irma. FEMA has spent an additional $1 billion on Hurricane Michael recovery efforts in Florida.

It often takes years for the money allocated to disaster recovery to be spent. The U.S. is still spending money for Hurricane Katrina recovery, 13 years after the storm hit Louisiana.

Left: A view of Hurricane Florence is shown churning in the Atlantic Ocean in a west, north-westerly direction heading for the eastern coastline of the United States, taken by cameras outside the International Space Station, September 12, 2018. Photo courtesy: NASA/Handout via Reuters