Trump administration is promising a ‘new’ border wall. The reality is less clear

As the U.S. Customs and Border Protection announced a spike in migrant apprehensions along the U.S.-Mexico border in the last fiscal year on Tuesday, Trump administration officials again promoted their efforts to build 450 miles of new border wall by the end of 2020. In reality, however, most of the projects involve replacing old barriers or adding secondary fencing rather than creating entirely new barriers.

“The men and women of the U.S. Customs and Border Protection have asked for this wall, and the president has delivered,” Morgan added.

But the total mileage of completely “new wall” is still far short of the end goal.

Customs and Border Protection estimates 76 miles have been built, 156 miles are under construction and 276 miles are in “pre-construction.” The new fencing in El Paso is one example of the administration’s effort to replace infrastructure — rather than cover new terrain — with taller steel barriers.

While former border officials, border security analysts and local officials agree that some of the fencing along the border needs to be upgraded, they also raise concerns that the new designs do not adequately address the changing nature of immigration.

What exists now and what’s planned

Congress has approved funding to repair 139 miles of the existing barrier, and by shifting $3.6 billion from the Defense Department’s budget, the Trump administration plans to fund 11 projects that would replace or build an additional 176.5 miles of barriers at the border.

The Senate passed a bill that would have blocked Trump’s use of Pentagon funds for border projects, but Trump vetoed that measure and the Senate does not appear to have the votes to override him.

Most security experts agree that fencing is important to keeping order at the border, but, they emphasize, it is only one of many tools.

“A fence, standing alone, is not a strategy for controlling the border against illegal migration.”

“A fence, standing alone, is not a strategy for controlling the border against illegal migration,” said Robert C. Bonner, the commissioner of Customs and Border Protection under former President George W. Bush.

Bonner and other immigration experts say fencing is not meant to keep people out of the U.S. Instead, it is intended to slow undocumented immigrants down enough so that Border Patrol agents can apprehend them before they get to U.S. cities and blend into the larger population.

That’s why various types of fencing are used on different parts of the border, depending on a number of factors including terrain and proximity to cities.

Near urban areas, two layers of barriers can be particularly effective because Border Patrol agents can closely monitor the area and pick up migrants before they can cross the second fence. 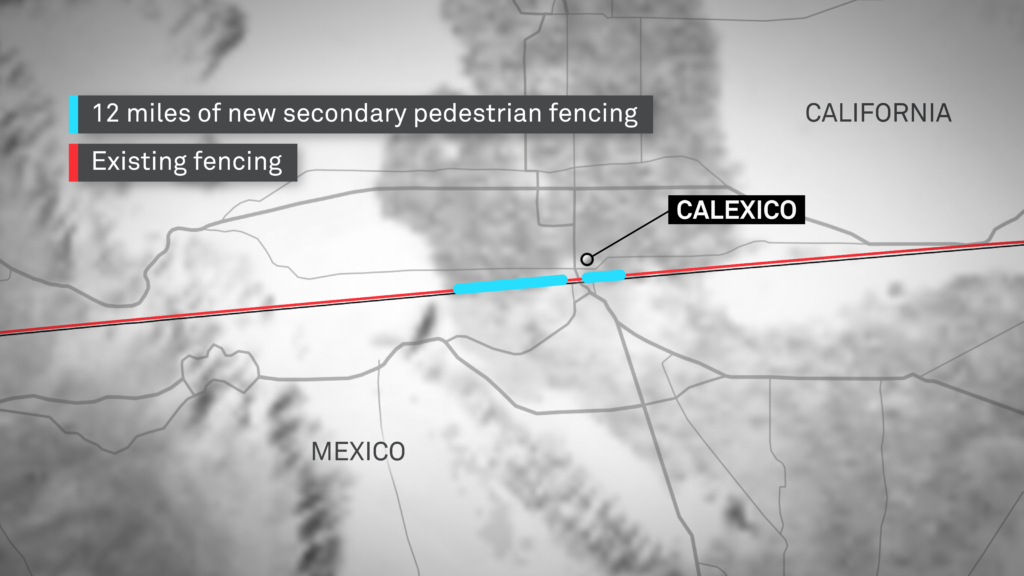 An approximation of El Centro Project 9 that is expected to be funded with Defense Department dollars. The project promises 12 miles of new secondary pedestrian fencing. Graphic by Daniel Davis

“In an area where once someone crosses, they disappear fast, [secondary fencing] is a huge tactical advantage,” said Blas Nuñez-Neto, a senior policy researcher at the RAND Corporation.

Some of the pedestrian fencing that currently exists on the border was made from Vietnam-era helicopter landing mats, which is easier to cut, climb over or dig under than the “bollard style” 30-foot-tall steel fencing the Trump administration is using to replace it. 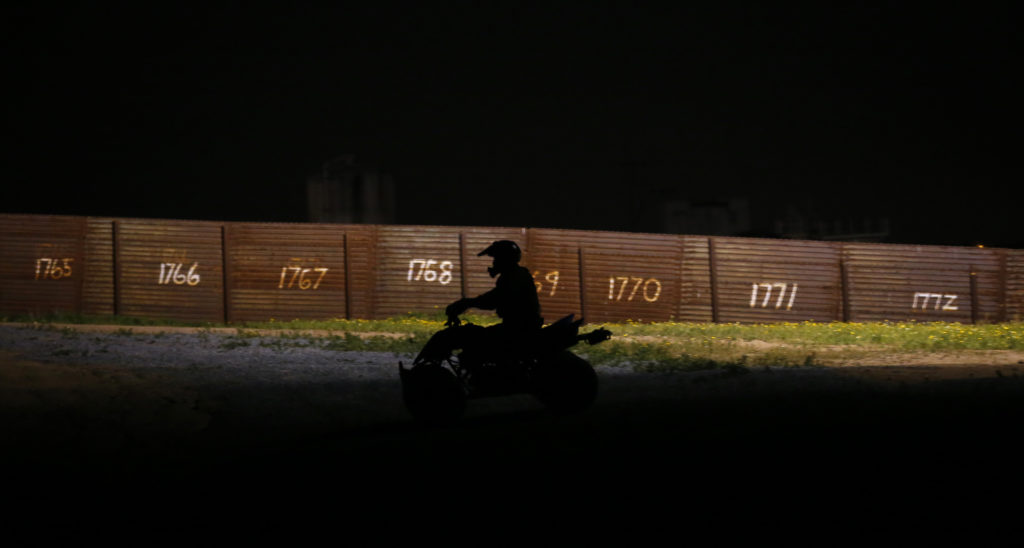 A U.S. Border Patrol agent patrols on his ATV along the primary fence on the international border between Mexico and the United States near San Diego, California March 26, 2013. Some of the border fencing includes Vietnam-era landing mats. Photo by Mike Blake/Reuters

Earlier this year, 376 Central American immigrants entered the country through a hole dug under the border fence near Yuma.

“There is always going to be ways people are going to look to overcome a wall. That was a little too easy,” said Yuma’s Republican Mayor Douglas Nicholls.

Those immigrants did not try to evade Border Patrol agents and instead turned themselves in and asked for asylum.

Is a taller wall always better?

In rural areas, border security experts say less fencing is needed because it could take migrants hours or days to get to the nearest urban center, and Border Patrol is likely to pick them up before they get that far.

Instead, past administrations have opted for vehicle barriers, which are shorter — about 4 feet tall — and aim to stop cars smuggling either people or drugs across the border. 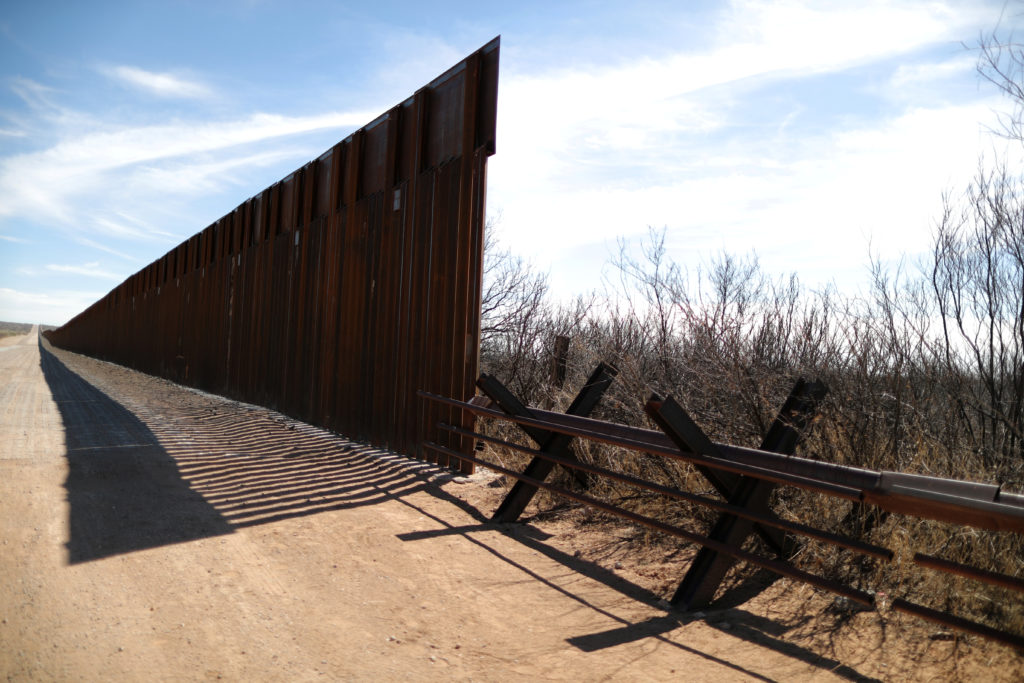 The treacherous journey hasn’t stopped some migrants from trying to make their way through the Arizona desert, only to die from heat exhaustion or lack of water. Supporters of larger fences in rural areas argue they could deter people from trying to make it across the dangerous terrain, but others blame fencing in other areas for pushing people further into the desert in the first place.

Environmental groups have also opposed pedestrian fencing because the larger fences break up animal habitats and migration routes. Vehicle barriers are not as detrimental because animals can typically jump over or crawl under them. 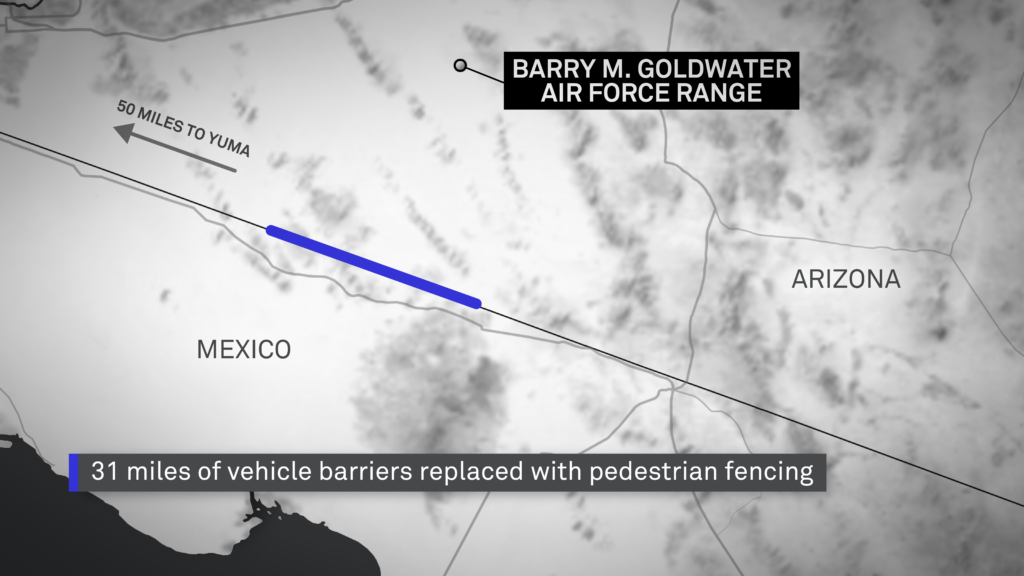 An approximation of Yuma Project 3 in Arizona where 31 miles of vehicle barriers will be replaced with tall pedestrian fencing. Graphic by Daniel Davis

The Trump administration has said it would replace many miles of vehicle barriers with pedestrian fences, which can be up to 30 feet high. It plans to use the Pentagon funds to rebuild 60.5 miles of vehicle barriers with pedestrian fencing, according to a letter from Defense Secretary Mark Esper that outlined the 11 projects that would be funded with the defense budget.

Southeast of Yuma, the work has already begun.

One of the largest sections where new border barriers are planned is 52 miles near Laredo, Texas, along the Rio Grande, according to Esper’s letter.

When most of the current border fencing was built in the 2000s, the U.S. chose not to build along most of the Rio Grande because it acted as a natural barrier where Border Patrol agents can easily spot and apprehend people trying to cross into the U.S. 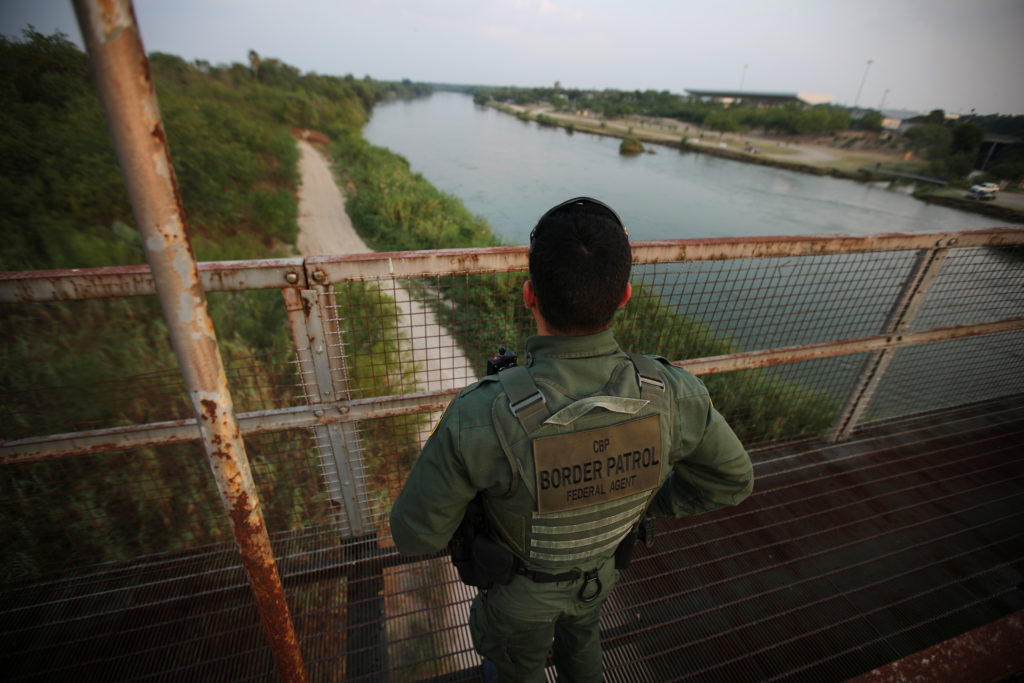 A U.S. border patrol agent looks over the Rio Grande river at the border between United States and Mexico, in Roma, Texas, on May 11, 2017. In much of Texas, the river serves a a natural barrier for immigrants trying to cross the border. Photo by Carlos Barria/Reuters

The Trump administration has decided the natural barrier is not enough near Laredo, where about 38,378 were apprehended from October 2018 through September 2019. In total, more than 851,000 people were apprehended between ports of entry along the southern border in that same time period, Customs and Border Protection announced Tuesday.

Most of the Border Patrol’s apprehensions occurred further southeast along the Rio Grande, in part because that path is the shortest distance between Central America to the U.S. But building a fence in that area is more difficult because it is a floodplain.

“The river moves, so any barrier you put is likely to get washed away or moved,” Nuñez-Neto said. 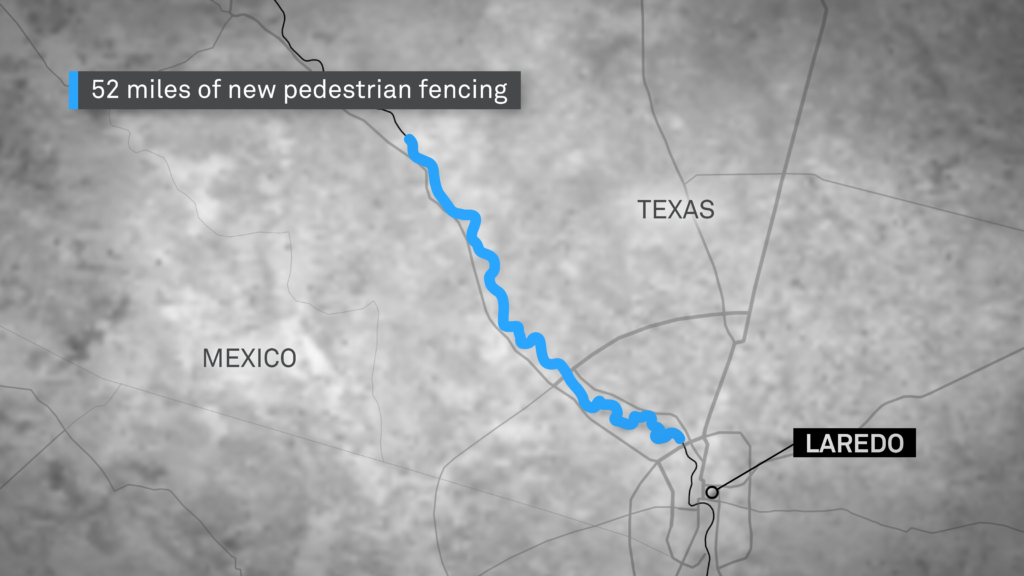 An approximation of Laredo Project 7, which is expected to include 52 miles of new pedestrian fencing near the Texas-Mexico border, which is delineated by the Rio Grande. Graphic by Daniel Davis

To build a wall in Texas, the Trump administration will also have to acquire large amounts of land along the U.S.-Mexico border from private landowners.

The Washington Post reported this week that only 16 percent of the needed property has been acquired. The Trump administration could take the land using eminent domain, as the federal government has done in the past, but that is also likely to result in lengthy lawsuits.

The alternatives to border walls

Immigration experts emphasize that, if reducing border crossings is the goal, high-tech border security, such as sensors and aerial surveillance, should be combined with fencing.

They also note that many immigrants coming across the border do not want to evade U.S. law enforcement at all. Instead, they are voluntarily turning themselves in and asking for asylum.

“If you’re worried about drugs, you need to make investments in the ports of entry, and if you are worried about the current immigration system, we need to reform our asylum system,” Nuñez-Neto said.

Left: A U.S. Border Patrol Agent closes one section of the border fence between U.S.-Mexico in El Paso, Texas, U.S May 15, 2019. Photo by Jose Luis Gonzalez/Reuters