Thousands of people gathered at the Women’s March “Power to the Polls” event in Las Vegas, Nevada, on Sunday, an event meant to kick off a nationwide voter registration campaign.

The event, which was held at Sam Boyd Stadium, follows Saturday’s sister marches, in which about 250 U.S. cities planned to participate. In New York City, alone, there were more than 200,000 protesters, according to NBC New York. While these demonstrations were largely organized by local leaders, the “Power to the Polls” event in Las Vegas, Nevada, was planned by the national Women’s March organization, which hopes to “convert the groundswell of momentum and activism into direct electoral power,” according to their website.

Large crowd inside Women’s March Las Vegas where female Nevada lawmakers are sending video messages from D.C., instead of speaking onstage, given the government is shutdown pic.twitter.com/6hwCdT4VbS

The organization is best-known for having coordinated the 2017’s Women’s March on Washington, one of the largest demonstrations the U.S. ever has seen. Organizers have since estimated that about 500,000 people were in attendance at Washington, D.C.’s historic march, with hundreds of thousands of others present at sister marches around the world. 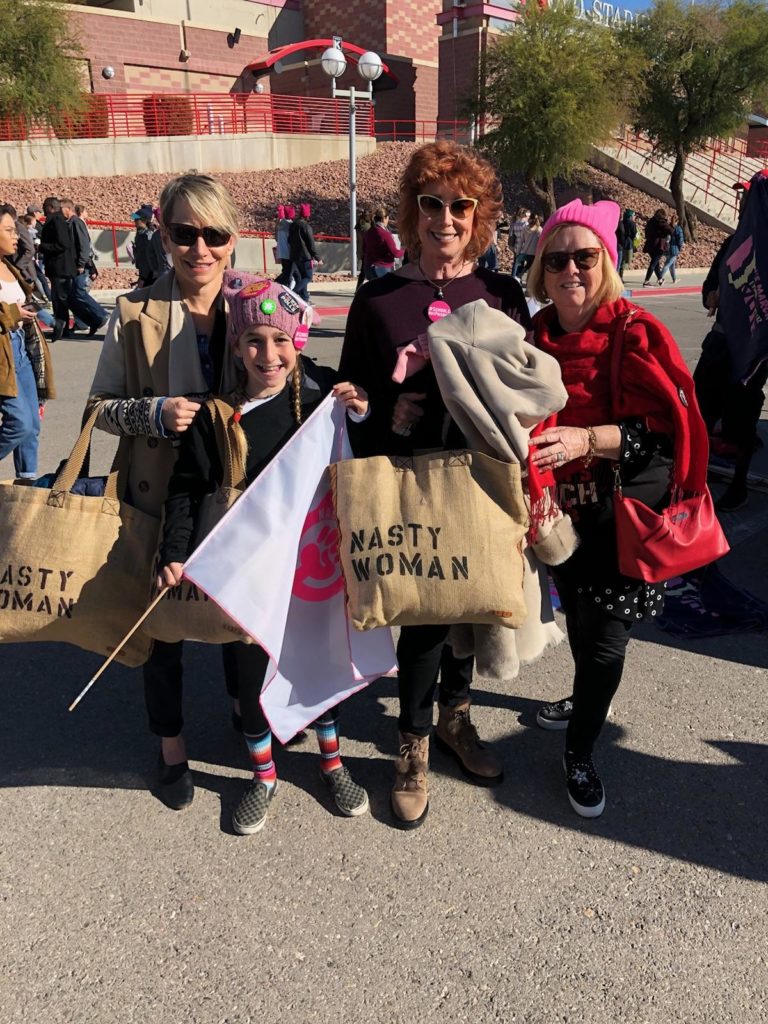 “We need more women in government,” said Gail Shields Miller, 73. “The men have been running the gov and have failed us. We have a lying party and president, it’s disgraceful. Too many people are not being represented.”

Alex Empire, 28, performs sex work at a legal brothel near Las Vegas. During the event, several of her group’s red umbrellas, which represent solidarity with sex workers, could be seen behind the speakers’ stage.

Last year, she chose not to attend the Women’s March, frustrated that sex workers had not been invited to represent a platform. 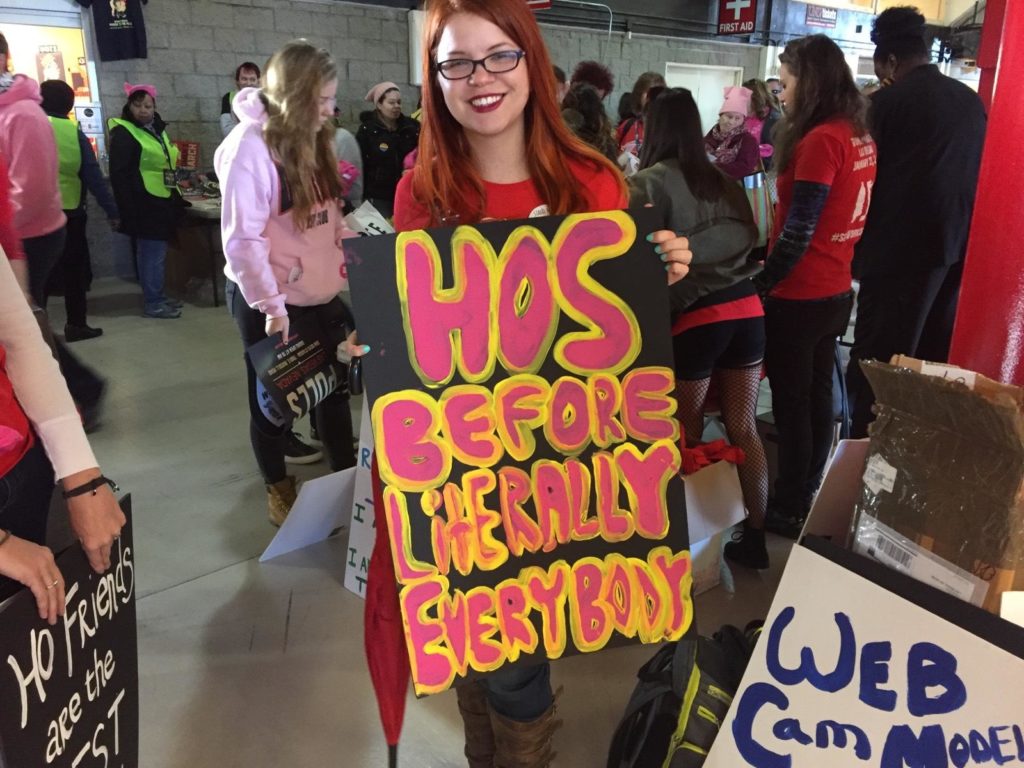 Alex Empire, 28, said she came to the rally to speak out on sex workers’ rights. Photo by Courtney Norris

“Many women are against sex work because of feminist views,” Empire said.

And while she respects those views, Empire said, “We have a right to do what we want with our bodies as well.” 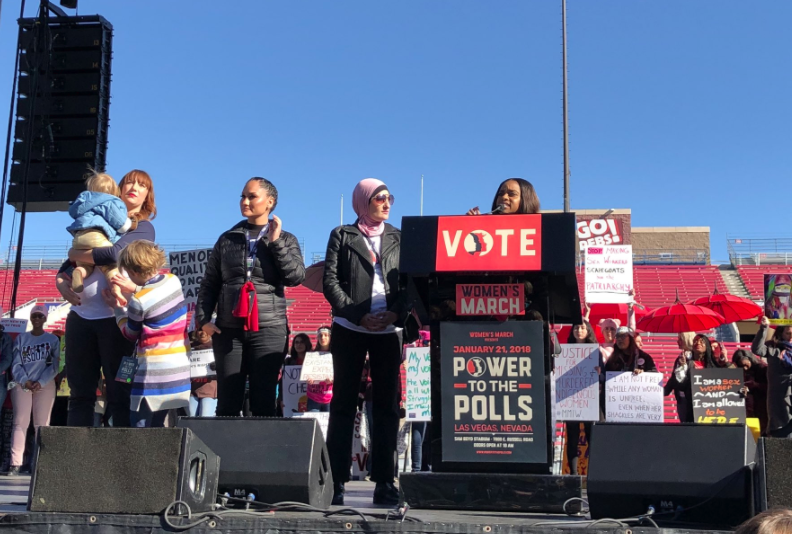 From left: Women’s March co-organizers Bob Bland, Carmen Perez, Linda Sarsour and Tamika Mallory speak to the crowd at the “Power to the Polls” event in Las Vegas, Nevada, on Jan. 21, 2018. Photo by Kamaria Roberts

Organizers say they have selected Nevada due to its history as a swing state and because of the number of women there who hold public office. In Nevada, female mayors serve three of Nevada’s largest cities and women make up half of the state’s U.S. Congressional Delegation.

Leaping off from Nevada and with the 2018 Senate races in mind, the Women’s March aims to mobilize disenfranchised communities in other battleground states. They also hope to advance more women and progressive candidates into elected office.

Speakers emphasized the particular struggles that immigrants, members of the LGBTQ community and women of color endure, stressing the importance of intersectionality, or the idea that these identities and others overlap to shape people’s experiences.

“Women have beaten the odds to elect our own to office,” Richards told the crowd. “And these victories were led and made possible by women of color. So, white women, listen up: we’ve got to do better.”

At Sam Boyd Stadium in Las Vegas, Nevada, people are carrying red umbrellas in a sign of solidarity with female sex workers. Photo by Courtney Norris

“I’m speaking specifically to white ladies here,” Bob Bland said. “We need to bring our voice and our vote, not just for ourselves, not just for the issues that directly impact us and our families. But for the issues of all marginalized communities. We must vote for the Dreamers. We must vote for indigenous women who are missing and murdered in alarming numbers. We must do it for trans women of color. For sex workers. For all of our black and brown communities.”

“Stand up for me, white women. Come to my aid,” Mallory said in a speech. “You say you want to be my friend? I don’t want to hear it from your mouth. I want to see it when you go to the polls at the midterm elections.”

Left: The "Power to the Polls" event drew thousands to Las Vegas, Nevada, on Jan. 21, 2018. Photo by Kamaria Roberts