LONDON — Thousands of people on two continents picked up the baton from the United States and rallied Sunday in solidarity with women demanding equality, justice and an end to sexual harassment.

Demonstrations in London, Paris, Sydney and other European and Australian cities followed much larger women’s marches held Saturday across the U.S. to mark the anniversary of President Donald Trump’s inauguration, as well as the protests it inspired.

In the British capital, demonstrators carried placards reading “We Are Powerful” and “Time’s Up” and chanted outside Prime Minister Theresa May’s office as they raised grievances ranging from workplace inequities to misogynistic abuse on social media.

“Today is a call for action to bring about change,” London protest co-organizer Shola Mos-Shogbamimu said. “This is so much more than Trump.” 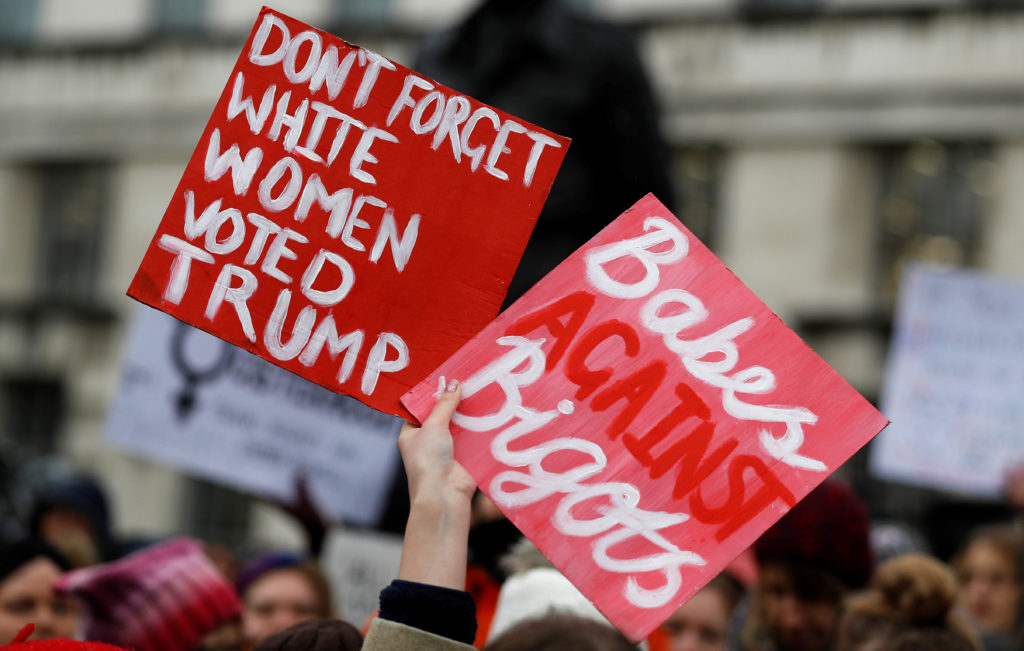 Protest placards are held up at a Times Up protest supporting women’s rights in London, Britain, on Jan. 21, 2018 Photo by Peter Nicholls/Reuters

The London event drew thousands of people despite sleet and snow. Heavy rain fell on the protesters who gathered near the Eiffel Tower, which could have been a factor in the small number of participants compared to the U.S. marches on Saturday.

“It doesn’t matter if the weather is like this,” Maggie Kan, who was one of the more than 100 people who didn’t let the rain and cold deter them. “We’re still coming together, and we’re going to still fight against Trump and his agenda.”

Some of the slogans on posters at the Paris rally read “Sorry for the inconvenience, we are trying to change the world” and “Look back, march forward.” 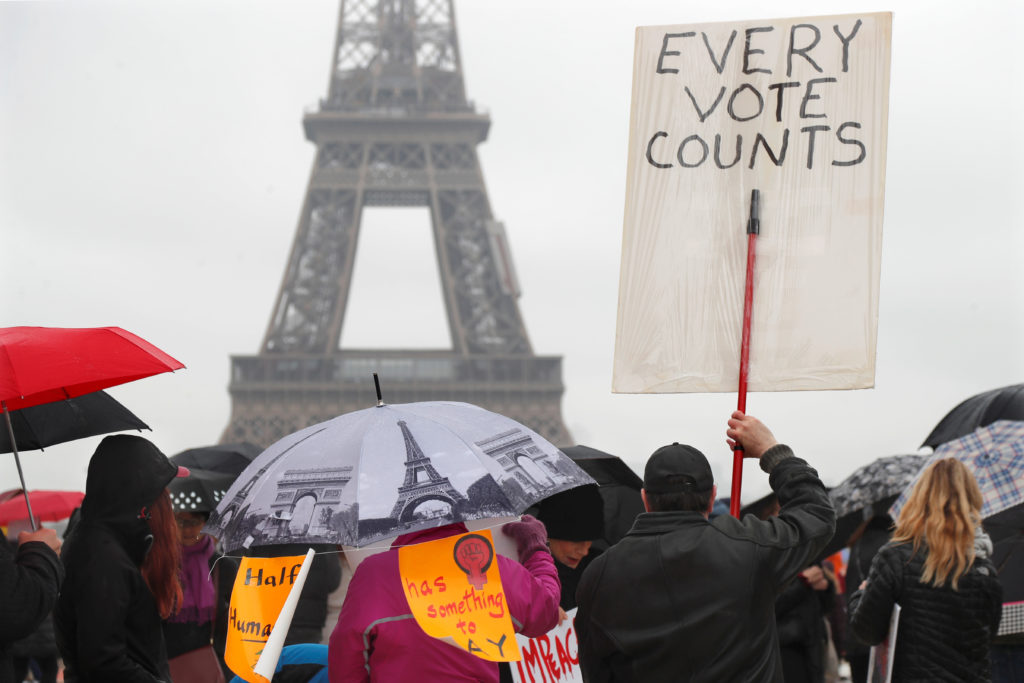 People gather at the Trocadero square near the Eiffel Tower to protest against U.S. President Donald Trump and for equal rights, in Paris, France, January 21, 2018. Photo By Charles Platiau/Reuters

The international events come at a time of reckoning for many men in Hollywood, the media and other industries as women speak out about sexual misconduct and inequity in general. More are scheduled to take place in the United States on Sunday.

They will culminate in a Las Vegas rally that will launch an effort to register 1 million voters and target swing states in the U.S. midterm elections later this year, which could shift control of Congress. 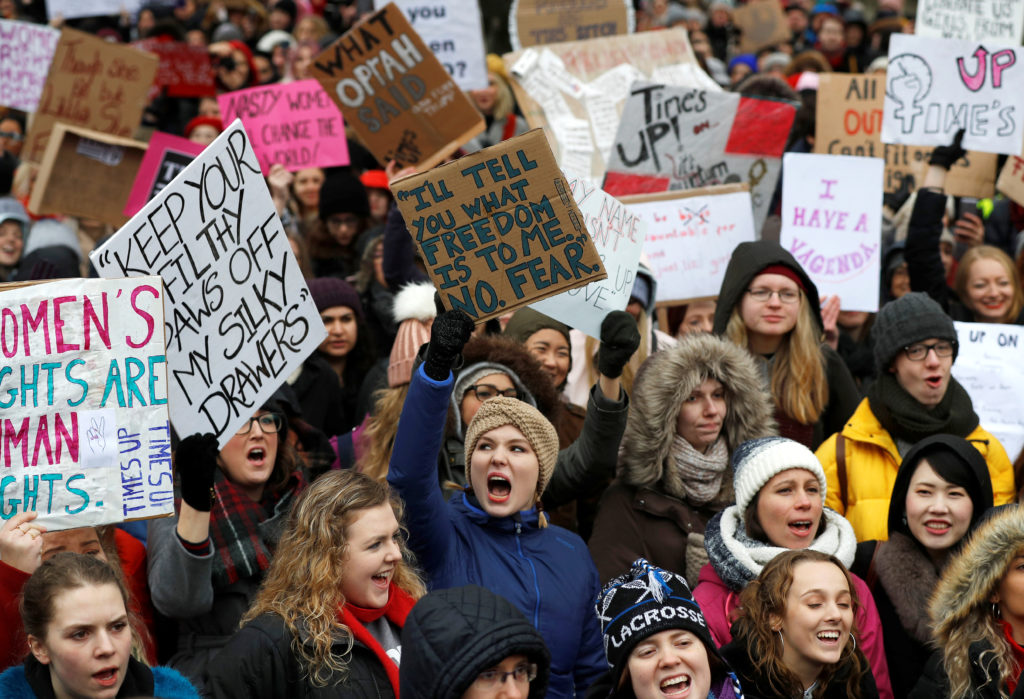 Demonstrators shout at a Times Up protest supporting women’s rights in London, Britain, on Jan. 21, 2018. Photo by Peter Nicholls/Reuters

Those who took part in this year’s events said they were galvanized by an avalanche of political and gender issues over the past year, as well as the #MeToo movement, which has been credited with countering widespread sexual abuse and misconduct.

Trump dismissed the suggestion that his presidency has been bad for women. He tweeted Saturday that it was a “perfect day” for women to march to celebrate the “economic success and wealth creation” of his first year in office.

“Get out there now to celebrate the historic milestones and unprecedented economic success and wealth creation that has taken place over the last 12 months,” the Republican wrote. “Lowest female unemployment in 18 years!” 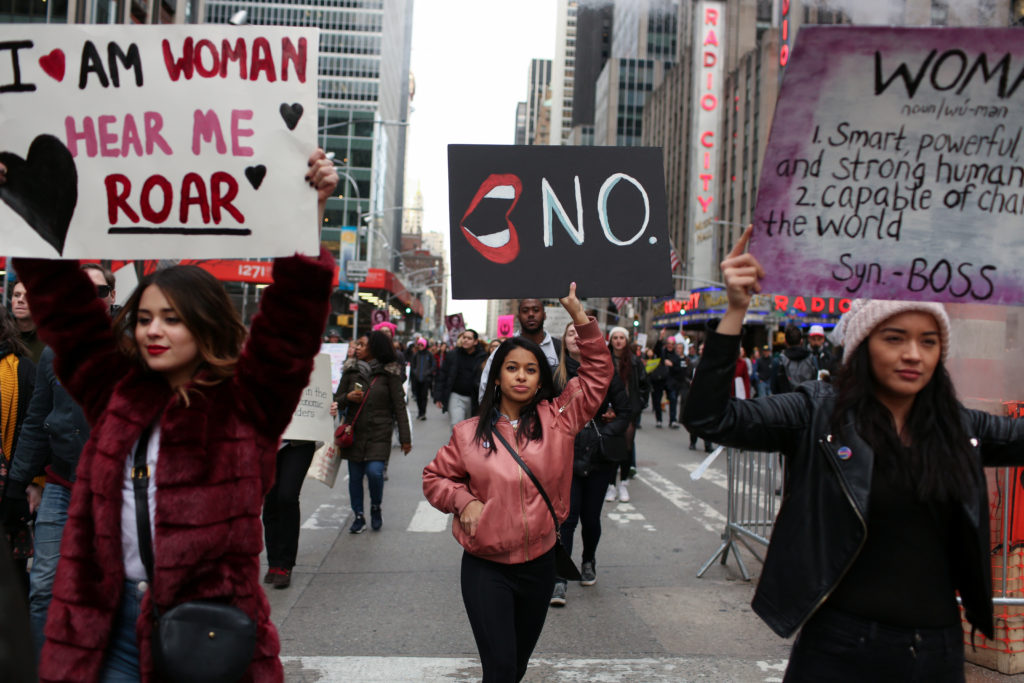 In Palm Beach, Florida, home to Trump’s Mar-a-Lago estate, several hundred people marched Saturday carrying anti-Trump signs. A group of women wearing red cloaks and white hats like the characters in the book and television versions of “The Handmaid’s Tale,” which imagines a future in which women’s rights have been strictly limited, walked in formation with their heads bowed.

On Saturday, Oklahoma City protesters chanted, “We need a leader, not a creepy tweeter!”

The march in Washington, D.C., on Saturday took on the feel of a political rally when U.S. Sen. Kirsten Gillibrand on New York and Rep. Nancy Pelosi of California, both Democrats, urged women to run for office and vote to oppose Trump and the Republicans’ agenda.

“We march, we run, we vote, we win,” Pelosi said to applause. 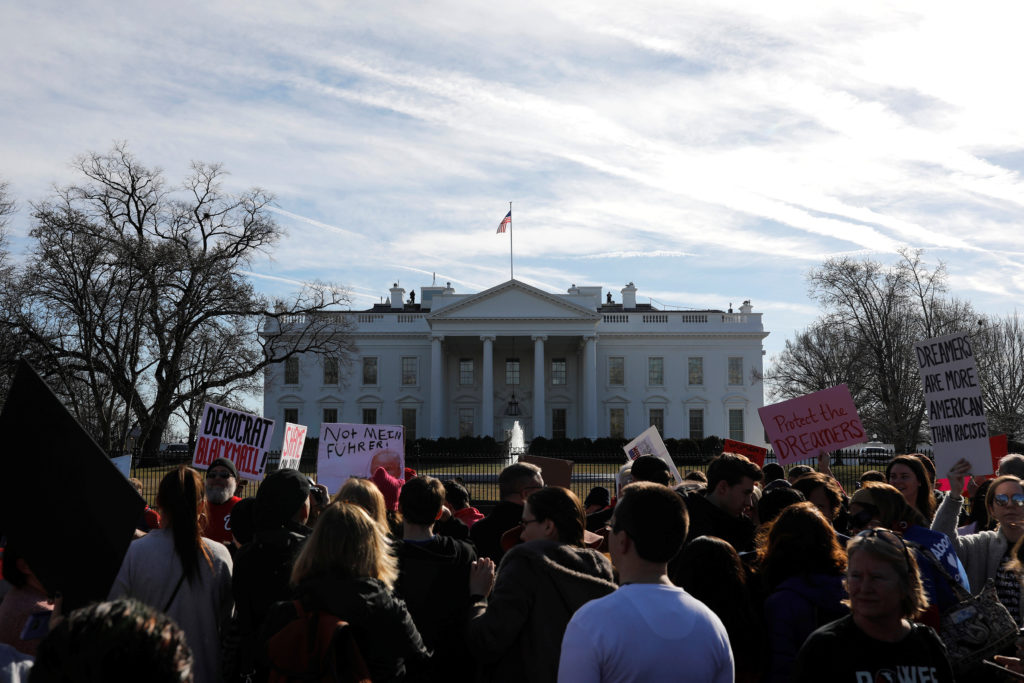 People participate in the second annual Women’s March in outside the White House in Washington, U.S. January 20, 2018. Photo By Aaron Bernstein/Reuters

Cathy Muldoon, a high school librarian from Dallas, Pennsylvania, took her two teenage daughters to the New York rally and said marching gives people hope. She said this year’s action is set against the backdrop of the Trump presidency, which “turned out to be as scary as we thought it would be.”

“I’ve not seen any checks and balances,” she said. “Everything is moving toward the right, and we have a president who seems to have no decency.”

In Los Angeles, Eva Longoria, Natalie Portman, Viola Davis, Alfre Woodard, Scarlett Johansson, Constance Wu, Adam Scott and Rob Reiner were among the celebrities who addressed a crowd of hundreds of thousands at the women’s march there. 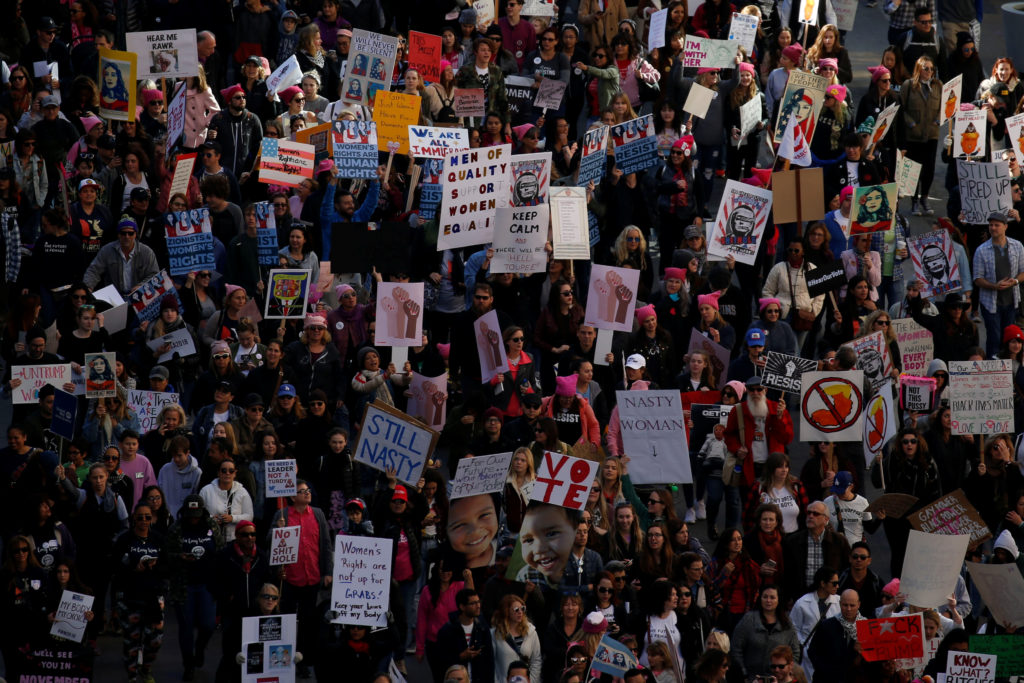 Longoria, who starred in TV’s “Desperate Housewives,” told marchers their presence mattered, “especially when those in power seem to have turned their backs on reason and justice.”

Woodard urged everyone to register and vote, saying, “the 2018 midterms start now.”

Cohen reported from Los Angeles and Lush reported from in St. Petersburg, Verena Dobnik in New York, Sylvie Corbet in Paris, Chris Blake in Sydney and Jo Kearney in London contributed to this story.