PAHOA, Hawaii — A volcano that is oozing, spewing and exploding on Hawaii’s Big Island has gotten more hazardous in recent days, with a river of molten rock flowing into the ocean and flying lava causing the first major injury.

Kilauea volcano began erupting more than two weeks ago and has burned dozens of homes, forced people to flee and shot up plumes of steam from its summit that led officials to distribute face masks to protect against ash particles.

Lava flows have grown more vigorous in past days, spattering molten rock that hit a man in the leg. 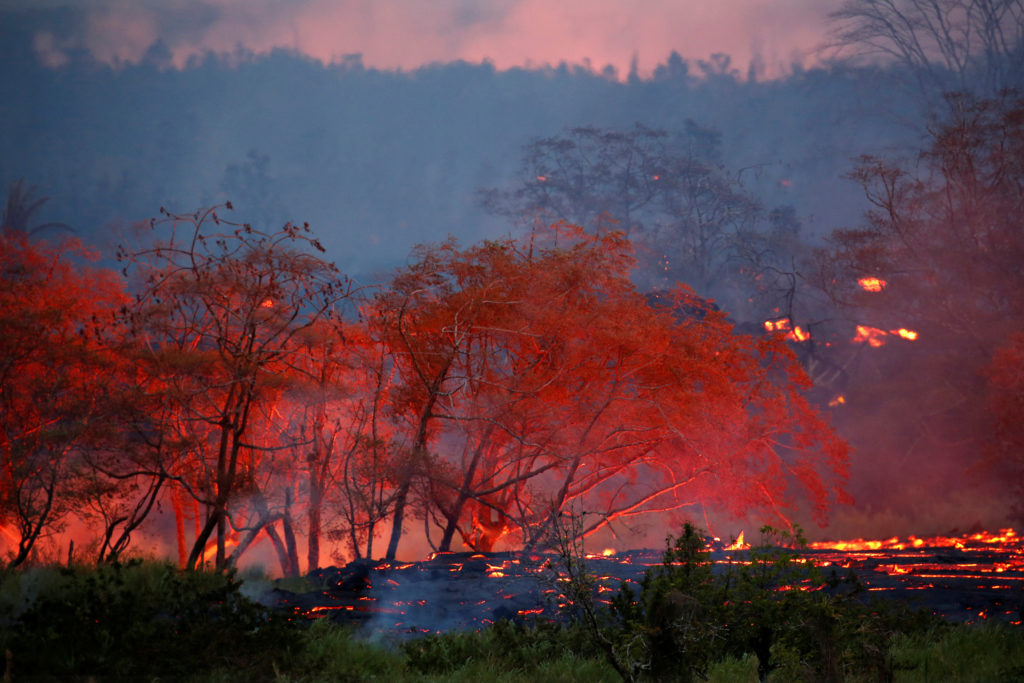 Lava flows through trees on the outskirts of Pahoa during ongoing eruptions of the Kilauea Volcano in Hawaii, U.S., May 19, 2018. Photo by Terray Sylvester/Reuters

He was outside his home Saturday in the remote, rural region affected by the volcano when the lava “hit him on the shin, and shattered everything from there down on his leg,” Janet Snyder, Hawaii County mayor’s spokeswoman, told the Hawaii News Now TV station.

Lava that’s flying through the air from cracks in the Earth can weigh as much as a refrigerator and even small pieces can be lethal, officials said.

The injury came the same day lava streamed across a highway and flowed into the ocean. The phenomenon sends hydrochloric acid and steam with glass particles into the air and can lead to lung, eye and skin irritation, another danger for residents as the plume can shift with the wind, the Hawaii County Civil Defense agency said.

The highway has shut down in some spots, and residents in the area have been evacuated.

With the problems compounding, scientists can’t say whether lava flows from nearly two dozen fissures will keep advancing or stop.

“We have no way of knowing whether this is really the beginning or toward the end of this eruption,” said Tom Shea, a volcanologist at the University of Hawaii. “We’re kind of all right now in this world of uncertainty.”

The area affected by lava and ash is small compared with the Big Island, which is about 4,000 square miles (10,360 square kilometers). The volcano has spared most of the island and the rest of the Hawaiian chain. 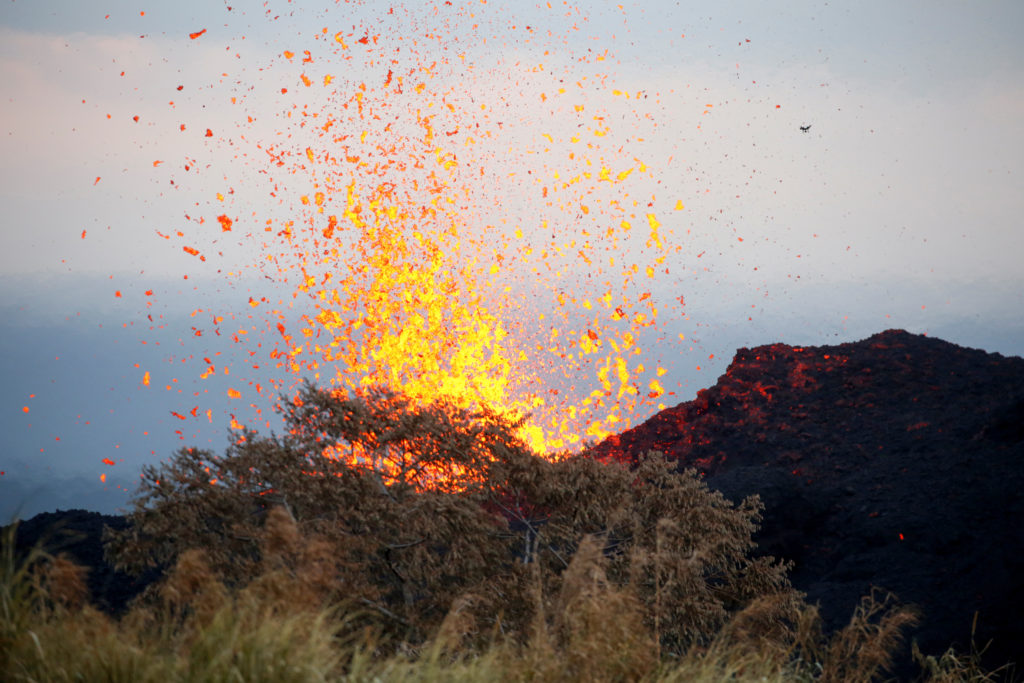 Lava erupts on the outskirts of Pahoa during ongoing eruptions of the Kilauea Volcano in Hawaii, U.S., May 19, 2018. Photo by Terray Sylvester/Reuters

Evacuation orders for two neighborhoods with nearly 2,000 people were given after the first fissure opened on May 3. Officials have been warning neighboring communities to be prepared to evacuate.

Lava flows have sped up as fresher magma mixes with decades-old magma, creating hotter and more fluid flows, scientists said. Two fissures had merged by Saturday, creating a wide flow moving at up to 300 yards (274 meters) per hour.

Edwin Montoya, who lives with his daughter on her farm near where lava crossed a roadway and trapped a handful of people Friday, said the fissure opened and grew quickly.

Left: Lava erupts on the outskirts of Pahoa during ongoing eruptions of the Kilauea Volcano in Hawaii, U.S., May 19, 2018. Photo by Terray Sylvester/Reuters