Lowest turnout since WW2: Final numbers are still being tallied, but at this point it looks pretty clear that turnout in these midterms was the lowest overall in 70 years. Turnout of the voting-eligible population was just 36.4 percent, according to the projection from the United States Elections Project, run by Dr. Michael McDonald at the University of Florida. That’s down from the 41 percent that turned out in 2010. You have to go all the way back to 1942 for lower numbers when turnout in that midterm was just 33.9 percent. They had a pretty good excuse back then — many adult-age Americans were preoccupied with fighting in a world war. 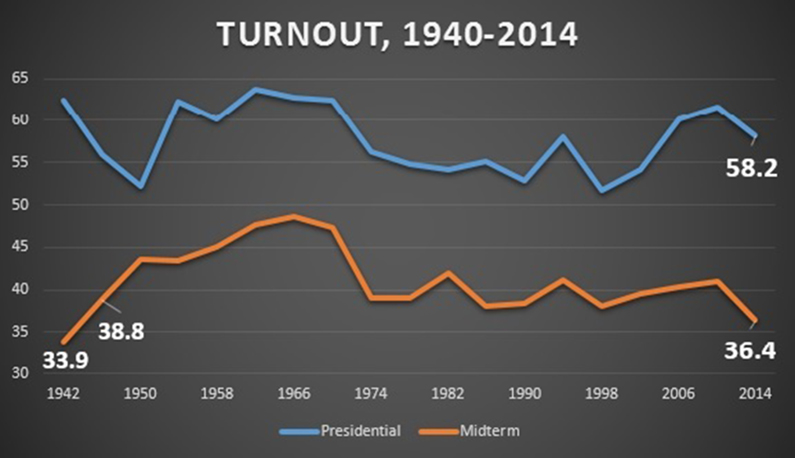 It was down, though — and by a lot in many places — in 36 others. Here are the top 10 biggest decreases:

Significantly factoring into the overall decrease because of its population was California, which despite a governor’s race was off by a quarter of its 2010 participation. Also factoring in — Ohio (down almost 20 percent), as well as New York and New Jersey, which were both down about 17 percent. Even Georgia, despite its hotly contested Senate race, was down 14 percent. And for Democrats looking for what went wrong in blue states like Maryland and Massachusetts, turnout was down in those states by 10 percent as compared to 2010.

Quote of the day: “Lose Mary Landrieu’s clout … for this?” “Whoa!” — a strikingly personal Sen. Mary Landrieu, D-La., campaign ad that takes aim at Rep. Bill Cassidy’s “coherence.” An announcer speaks the first part, with stammering clips of Cassidy throughout, followed by Cassidy’s, “Woah!” from the Republican Leadership Conference. Landrieu is the underdog in the Dec. 6 runoff. If Cassidy wins, it would give Republicans a 53rd seat.

Daily Presidential Trivia: On this day in 1775, the U.S. Marine Corps founded. No American president has served in the Marines, but how many have served in the military? Be the first to tweet us the correct answer using #PoliticsTrivia and you’ll get a Morning Line shout-out. Congratulations to Roy Wait ‏(@ind22rxw) for guessing Thursday’s trivia: How many times did William Jennings Bryan run for president and against whom? The answer was: three times, twice against William McKinley and once against William Howard Taft.

Here's the scene in Germany on 25th anniversary of fall of #BerlinWall http://t.co/GbQ7qvTqPB #fotw25 pic.twitter.com/V5U4Ezrs6V

Left: Voters wait in line to enter a polling place in Jamestown, North Carolina, on Election Day last week, but turnout for these midterms was the lowest since 1942. Photo by Alex Wong/Getty Images