3 questions for Republican presidential hopefuls ahead of CPAC 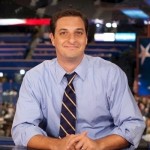 Morning Line going on a “Winter Break”: A note to our readers … tomorrow is one of your authors’ last day at PBS NewsHour after writing this item for the better part of the past year. Happily, Domenico Montanaro will stay within the public broadcasting family, going to NPR. But he will be missed here. It seemed like a good time for Morning Line to take a late-season “Winter Break.” Check back on the NewsHour website for all the latest political news and updates, and look for more in the coming weeks from the political team. Keep e-mails and thoughts coming to Lisa and Rachel. (E-mail addresses below.)

Bush’s, Walker’s, Paul’s CPAC challenge: To the politics, and there’s plenty of it. It’s that time of year again — time for CPAC, the Conservative Political Action Conference, when potential Republican presidential hopefuls try to woo activists from around the country who gather in Washington (technically now just outside D.C.). A couple of things to watch:

(1) How is Jeb Bush received? He is going to face pushback in this presidential campaign for his support of Common Core and immigration reform. Does that begin today? In fact, CPAC is holding panels on both issues: “Common Core: Rotten to the Core?” and “Immigration: Can Conservatives Reach a Consensus?” Bush is taking something of a risk in not addressing the crowd in a traditional podium speech, but instead taking questions from Fox’s Sean Hannity. It could pay off, if nothing else for having the courage to have a give and take.

(2) Does Scott Walker continue his momentum? This is going to be a long presidential campaign. Lots can and will change. Right now, Walker continues to have the momentum among the conservative base as the most viable alternative to Bush. The latest Iowa poll has him up by double-digits. But how does he do in the CPAC straw poll? (More on that below.)

(3) Does “Paul” still have the juice: Someone named Paul has won four of the last five CPAC straw polls, as Amy Walter pointed out in the NewsHour Politics Monday segment this past week. His father Ron inspired deeply passionate followers who came out to organize at these confabs. Rand looked to carry that torch, but he has not held quite as firmly to purist libertarian ideology as his father.

Watching the straw poll: Rarely does the CPAC straw poll predict who will be the GOP presidential nominee. In fact, just one person since 1974 has won the straw poll prior to an election year and emerged as the eventual nominee. That was Reagan who won the 1976, 1980 and 1984 straw polls. (Back then, they didn’t vote every year.) George W. Bush won in 2000, but Gary Bauer won in 1999. Mitt Romney won in 2012, but Ron Paul won in 2011. Does someone surprising emerge, like, say, Marco Rubio, who finished second last year? Or is his stance on immigration too toxic? Also, don’t be surprised if Jeb Bush does win it. Even though this is a conservative crowd, straw polls are all about organization. That’s why Mitt Romney won four of these between 2007 and 2012.

Tensions flare between U.S.-Israel: Tensions between the U.S. and Israel flared into the open in the last couple of days ahead of Israeli Prime Minister Benjamin Netanyahu’s scheduled address to Congress Tuesday. First, on Charlie Rose’s show Tuesday night, National Security Adviser Susan Rice called Netanyahu’s forthcoming address “destructive of the fabric of the relationship.” Then, Secretary of State John Kerry yesterday took a shot at Netanyahu’s credibility on what to do about Iran, because of his support for the Iraq war. “The Prime Minister was also profoundly forward-leaning and very outspoken about the importance of invading Iraq and George W. Bush,” Kerry said during questioning on Capitol Hill. Netanyahu is upset with Western allies for forging ahead with Iran nuclear negotiations over his opposition. This is the most outspoken U.S. officials have been publicly in the Obama administration about Netanyahu, whose speech before Congress comes two weeks before voting in Israel for his reelection. The White House had previously been stressing that it had a long-standing policy of not inviting world leaders to public U.S. events in the weeks leading up to their elections back home and were irked that the address had been worked out between House Speaker Boehner and Netanyahu adviser Ron Dermer, a former Republican operative.

Lowest point in U.S.-Israeli relations? Some high-profile Democrats are not attending the speech, but several pro-Israel Democrats invited Netanyahu to meet with them. Ironically, Netanyahu turned them down, so as to not look “partisan.” “Though I greatly appreciate your kind invitation to meet with Democratic Senators, I believe that doing so at this time could compound the misperception of partisanship regarding my upcoming visit,” Netanyahu wrote in response to Sens. Richard Durbin of Illinois and Dianne Feinstein of California. So is this the lowest point of U.S.-Israeli relations? As we wrote back in August, Obama is not the first U.S. president to have a tense relationship at times with Israel. We cited that in the 1980s, Ronald Reagan expressed frustration with Israeli bombings in Beirut during the Lebanese civil war. Bloomberg today notes that the dustup between Obama and Netanyahu has “brought comparisons to a low point in relations in 1992, when then-President George H.W. Bush tussled with Israel Prime Minister Yitzhak Shamir over Israeli settlement construction.” And, it’s worth pointing out, that this tension comes even as Democratic candidates have consistently won two-thirds or more of American Jewish voters over the last 30 years.

DHS shutdown showdown — How will this end? As you may have seen on NewsHour last night, there is currently no single funding bill for the Department of Homeland Security that has the votes to pass both chambers of Congress. With funding due to run out tomorrow night, how does this end? Two leading possibilities: (1) The Senate passes a bill with no strings attached today. Possibly late today or early hours of tomorrow. Then the pressure is on the House. If all Democrats (188) vote in support of a “clean” Senate funding bill, just 29 Republicans votes (out of 245) are needed for passage (With two vacancies, a majority in the House is currently 217 members.) In theory, such a bill could pass in the next two days. (2) House conservatives dig in and push for a shorter-term bill, a few days, to try and extend the immigration debate.

In both of these scenarios, votes could happen today, tomorrow or over the weekend, meaning there is a possibility that DHS funding could lapse briefly. For now, the leading end-game theory is that the Senate will take a firm stance for funding DHS, and only funding DHS, and the House will then have tremendous pressure on it to accept that bill.

Daily Presidential Trivia: On this day in 1929, President Coolidge signed a bill creating the Grand Teton National Park. Who was the first president to create/designate a national park? Be the first to tweet us the correct answer using #PoliticsTrivia and you’ll get a Morning Line shout-out. Congratulations to Kenneth C. Davis (‏@kennethcdavis) for guessing Wednesday’s trivia: Who were the four original members of Washington’s cabinet? The answer: Alexander Hamilton (Treasury), Thomas Jefferson (State), Henry Knox (War) and Edmund Randolph (Attorney General).

Yesterday’s reminder to Members: Be on time & dress your best. https://t.co/CYSWeZz7em

West Wing looks good in the snow too. pic.twitter.com/iMOg7eJS2N

Did you bring your America outfit to wear to CPAC? This patriotic CPAC attendee did! The patriotism is strong! pic.twitter.com/jaDi76sF7u