When President Joe Biden gives his State of the Union address on March 1, he’ll be facing an American public that is largely dissatisfied with his presidency so far, according to the latest PBS NewsHour/NPR/Marist poll.

A majority of Americans — 56 percent — say Biden’s time in office to date amounts to failure — roughly the same proportion of people who felt that way after Trump’s first year in office. That number includes 91 percent of Republicans and 66 percent of independents. Another 39 percent of Americans overall, including 80 percent of Democrats, say Biden’s presidency has been a success.

If history is any guide, Biden has a long three years ahead. Biden’s first year should be “the most fun you’re ever going to have as president,” said Austan Goolsbee, who chaired the Council of Economic Advisers under President Barack Obama and currently teaches economics at the University of Chicago. After that, “your popularity tends to go down.”

More than half of Americans say they disapprove of Biden’s performance as president, with little change since December when the omicron variant dampened hopes that the U.S. had turned a corner on the pandemic. At the same time, rising inflation and supply chain breakdowns, as well as Biden’s stalled plans to help bring down costs on expenses like child care and health care, have added to a sense of disillusionment. 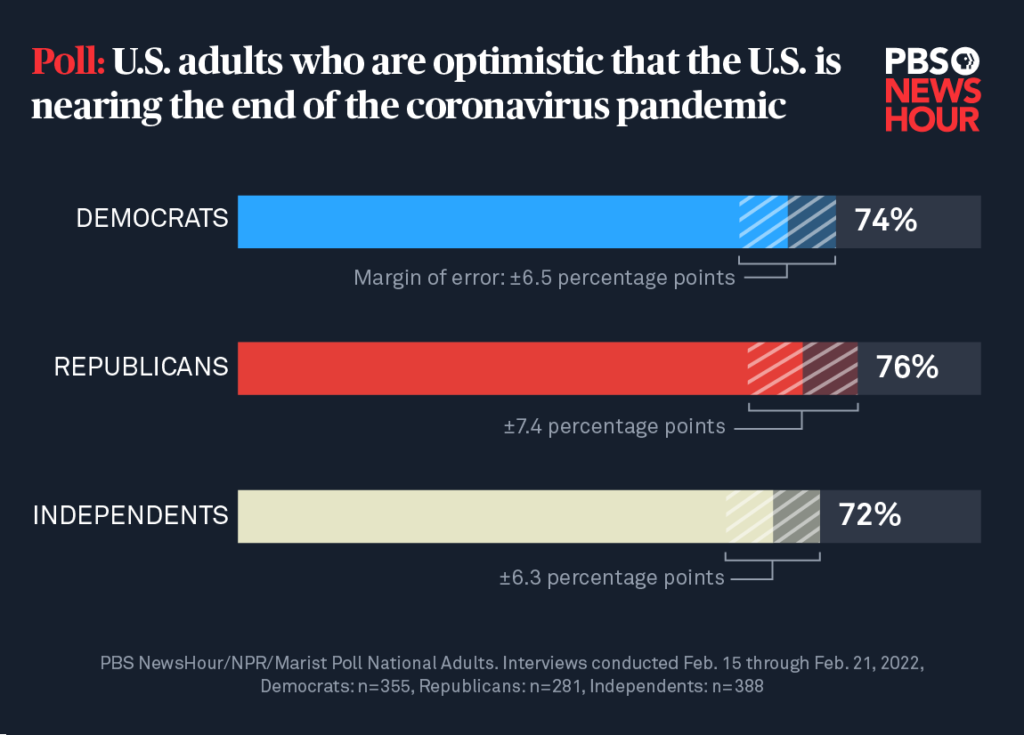 The nation’s protracted pandemic recovery – disrupted by the delta and omicron surges, breakthrough infections and delays in vaccine availability for younger children – have put Americans “in a sour mood for sure,” Goolsbee said, despite economic gains that have “been going up and up during that time.”

“It’s a disconnect with what the reality is,” he said.

Now Biden has to contend with a land war in Europe, Putin’s veiled threat of nuclear war, and the potential ramifications of a Russian invasion on the global economy. There too, Americans said they were not happy overall with Biden’s leadership on the crisis in the days before Russian forces entered Ukraine.

A majority of Americans don’t think Biden has done a good job of fulfilling his campaign promises, including one out of five Democrats and three-quarters of Republicans. With the first primaries for the midterm elections days away, the Biden administration will need to do a better job of translating words into actions, but also reminding the public of what it has done so far.

Here are four takeaways on how Biden is faring according to the latest poll, and what the American public thinks he needs to do next.

In the eyes of the public, Biden is struggling on domestic issues

Fifty-eight percent of Americans do not approve of how Biden has handled the economy. Public opinion about his economic leadership has deteriorated since he took office, and he trails people’s perceptions of Trump, who billed himself as a business-savvy president.

Jobless numbers remain very low, but public attitudes don’t reflect that reality, especially as other economic indicators, like rising gas prices, strain people’s budgets. That’s because some measures of the health of the economy “have an outsized impact” on how people feel, Goolsbee said. Gas stations, with their dynamic signs displaying prices, offer real-time commentary on how things are going.

This matters when consumer confidence has plunged to lows comparable to what was reported during the Great Recession, yet the economy’s growth rate hasn’t been this good in half a century, he said. Not to mention that inflation is not only seen in the U.S. right now, but in other countries around the world, Goolsbee said, meaning it can’t be pinned squarely on Biden. To him, this diminished confidence points more to supply chain issues tied to the pandemic than anything else, he said.

When it comes to COVID, the Biden administration has worked to distribute millions of vaccines equitably to the public, address harmful misinformation, and hand out free tests and high-quality masks. But it’s also been criticized for confusing messaging on masks and vaccine mandates as the virus evolved, lacking a long-term strategy for testing, as well as being the target of people’s pandemic weariness and frustration. Americans are divided over how they view the Biden administration’s leadership during the pandemic, with 47 percent saying they approve of what the White House has done so far and another 49 percent saying they disapprove.

One of Biden’s biggest wins also didn’t get as much attention as it could have. Instead of celebrating the passage of his infrastructure legislation (a major accomplishment Goolsbee called “extremely improbable”), “it seems like we as a country – and both parties – just move onto the next thing,” Goolsbee said.

At this point, Goolsbee said, Biden’s approval numbers matter even more as he tries to push big policies because “his own people are [going to be] less willing to stick their necks out for his agenda.”

In the days before Russian President Vladimir Putin launched an invasion of Ukraine, half of Americans said they disapproved of how Biden had handled the growing Russian aggression toward its neighbor, according to this latest poll, which was conducted Feb. 15 through Feb. 21. On Thursday, the United States and its allies launched a series of economic sanctions against Russia in response to its airstrikes against Ukraine. 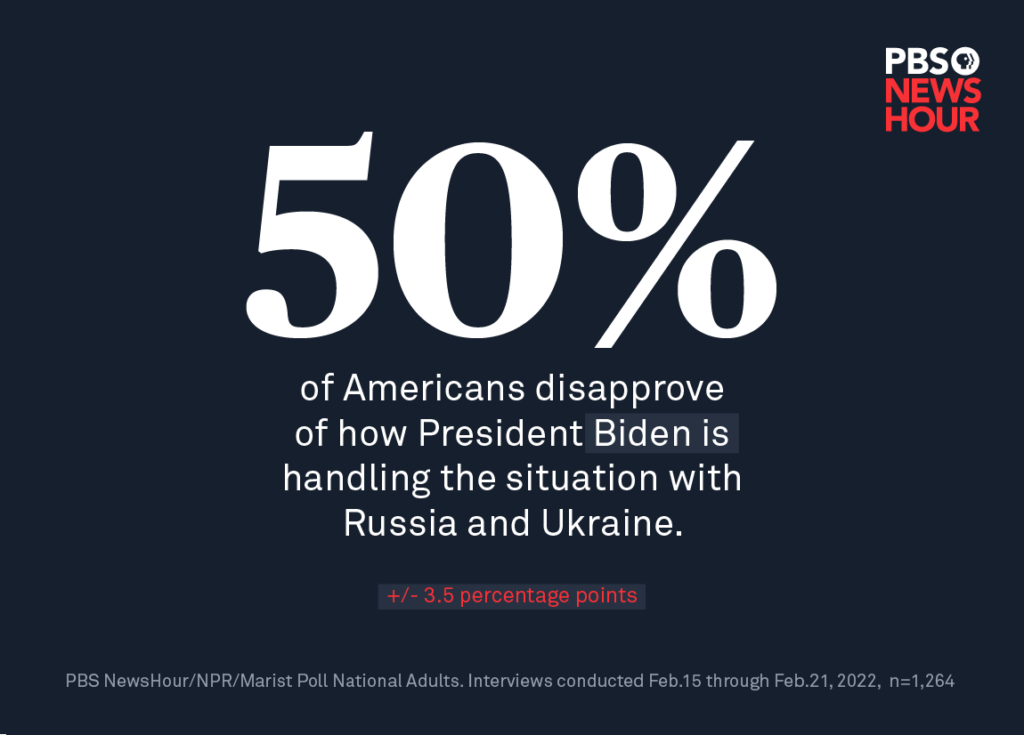 Trouble has been brewing for years – a threat that U.S. and British intelligence agencies warned back in the fall would eventually lead to an invasion. On Wednesday, Biden called Russia’s actions “a premeditated war that will bring a catastrophic loss of life and human suffering.”

“Russia alone is responsible for the death and destruction this attack will bring, and the United States and its Allies and partners will respond in a united and decisive way,” Biden said in a statement. “The world will hold Russia accountable.”

WATCH: How the Biden administration is responding to the Russian incursion in Ukraine

The toll of economic sanctions are unlikely to “have any impact on Vladimir Putin’s decision-making,” according to Angela Stent, senior adviser to the Brookings Institution’s Center for Eurasian, Russian and East European Studies, who spoke with PBS NewsHour anchor and managing editor Judy Woodruff on Thursday.

According to the poll, most Republicans and about half of independents were especially dissatisfied with what Biden has done so far, while a majority of Democrats said they support how the president has managed the crisis.

Some Republican leaders have amplified this partisan discontent by praising Putin, even as U.S. allies condemn him. This week, Trump lauded what he called Putin’s “genius” strategy in Ukraine and demeaned Biden’s leadership. On Tuesday, Mike Pompeo, the former president’s secretary of state, said he had “enormous respect for” Putin, who he called “very talented.” Conservative media personalities, including Tucker Carlson and Laura Ingraham, have struck similar tones, questioning why Americans would “hate Putin,” or insulting the Ukrainian president for asking Russia to not invade.

WATCH: How U.S. lawmakers are reacting to the escalating Ukraine crisis

On Friday, Biden named Judge Ketanji Brown Jackson as his pick for the U.S. Supreme Court.

WATCH: Why Judge Ketanji Brown Jackson is a leading candidate for the Supreme Court

In a rare glimmer of good news for the embattled president, this poll found that the public stands behind his decision to nominate the first Black woman to join the Supreme Court. Supreme Court Justice Stephen Breyer’s announcement in late January that he planned to retire, leaving a vacant seat on the nation’s highest court at the end of this term, will give him a chance to follow through on this campaign promise. With the additions of Justices Neil Gorsuch, Brett Kavanaugh and Amy Coney Barrett during Trump’s term, the makeup of the court has skewed more conservative. 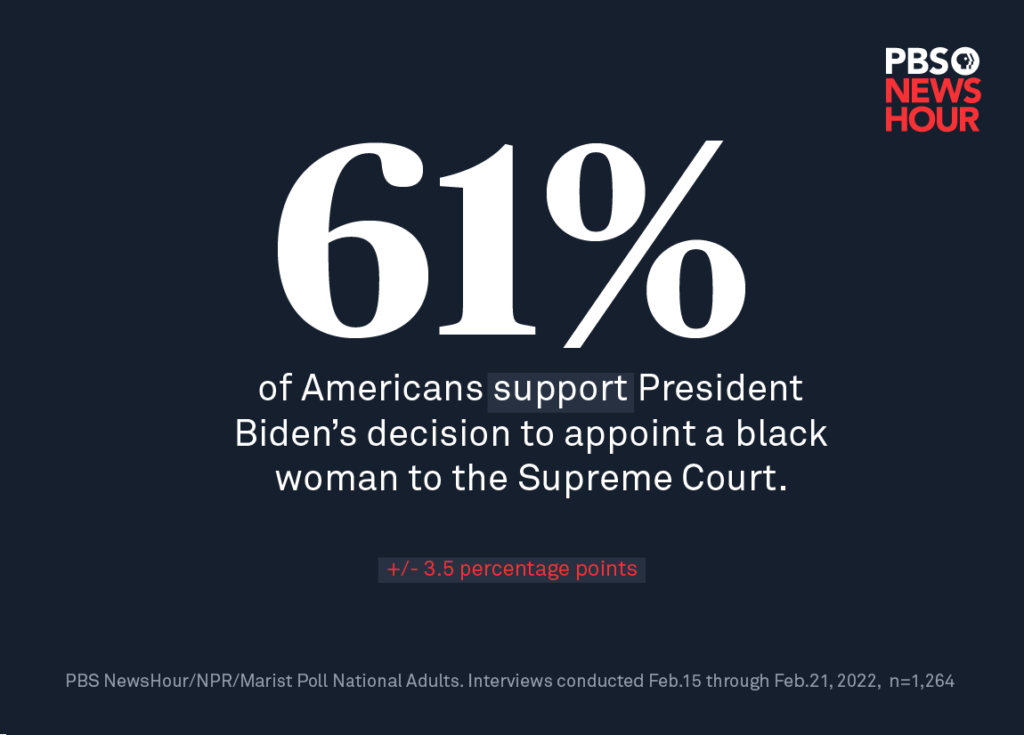 Six out of 10 Americans support Biden’s decision to replace Breyer with a Black woman. There was a majority of support across demographic groups except among Republicans, white Christian evangelicals, people who voted for Trump in 2020 and white men who didn’t graduate from college.

From a list of possible Biden priorities, inflation was most popular

Inflation should be Biden’s top priority right now, according to more than a third of U.S. adults — 38 percent — and nearly half of Republicans. In this latest poll, 51 percent of Americans also said the economic outlook for their communities is worse off now than a year ago – an idea that is particularly strong among Republicans, Trump voters, residents in rural communities and white people who did not graduate from college.

Yet that pessimism doesn’t show up when people reflect upon their household budgets. Thinking about their own personal finances, 48 percent of Americans said little has changed over the last year. Another 23 percent said their fortunes have improved. And looking at the year ahead, four out of 10 Americans said they expect to see financial stability continue. 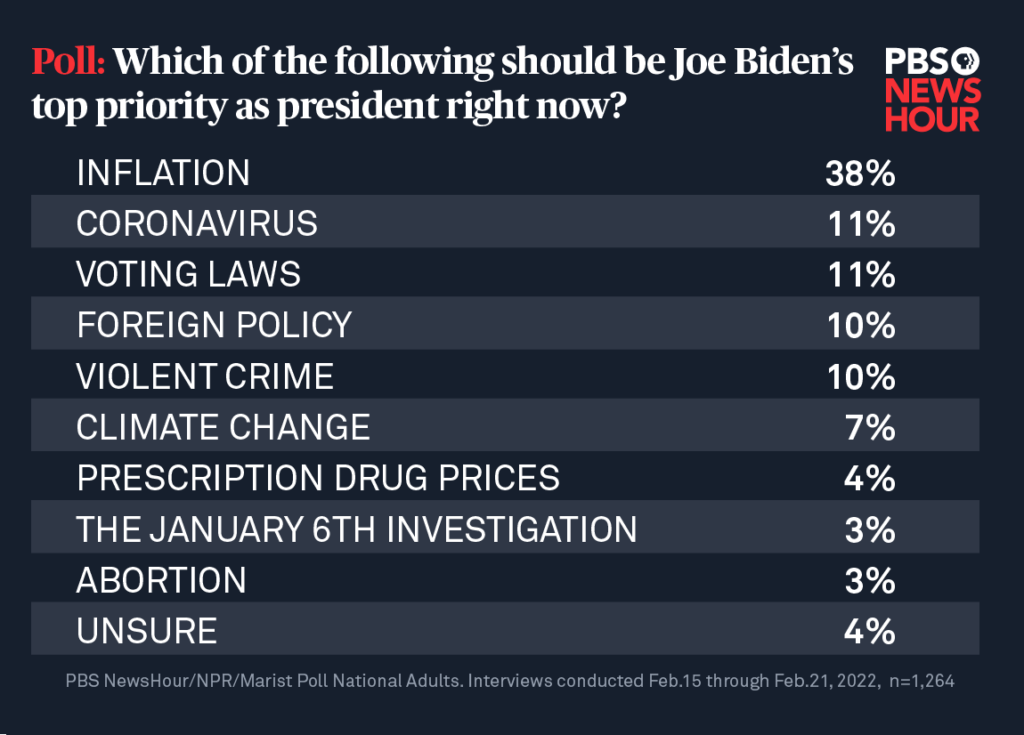 Aside from pocketbook concerns, Americans split their votes over what Biden’s top priority should be. One out of 10 U.S. adults said the coronavirus pandemic. Another one out of 10 said voting laws (including 23 percent of Democrats), with similar support for both foreign policy and violent crime.

Moving forward, Biden needs to make some choices about who he wants to please and how he plans to do so, said Lee Miringoff, who directs the Marist Institute for Public Opinion.

While Biden came into office promising to unite the country, about half of Americans — 52 percent — say he has done more to divide the nation, up from 35 percent in February 2021. He still has not reached the levels of divisiveness the public associated with Trump at this point in the previous administration. But it suggests that Biden’s attempts to sow bipartisanship and offer reconciliation and healing have not been enough to overcome tensions.

Six out of 10 of Americans say they think government officials should compromise to find solutions to the problems facing this country, according to this latest poll. But that desire to bring people together has weakened over the last decade.

In 2012, 72 percent of Americans said lawmakers should seek out middle ground, while another 24 percent said it was more important to stand on principle even if that risks creating political gridlock. Today, 64 percent prefer politicians who compromise and 29 percent say they choose firm principles at the risk of gridlock.

Ahead of the 2022 midterms, and even the race for the White House in 2024, presidential historian Jeffrey Engel said three factors will influence where people stand: the economy, COVID-19 and “something we have no idea what it will be. ” (He’s “not ready to say it’s Russia.”)

The rest of Biden’s administration could resemble one of two previous presidencies, said Engel, who directs the Center for Presidential History at Southern Methodist University in Dallas. It could look like President Jimmy Carter’s, where stagflation and the Iran hostage crisis dominated headlines and Carter suffered as “a man who faced intractable problems that were out of his control.” Or he could emerge like former President Ronald Reagan, who was also in political turmoil at a similar point in time during his presidency despite a troubled economy – a fact Americans often overlook in thinking back to Reagan’s legacy.

“One of the fundamental problems we have as a country — and it’s a nice problem we have — we have completely forgotten how bad things can get,” Engel added.

Left: If history is any guide, Biden has a long three years ahead, according to this latest PBS NewsHour/NPR/Marist poll. Photo by Drew Angerer/Getty Images