5 graphs that show how the face of America is changing

Obama’s aggressive posture on immigration, as McConnell waves the white flag on DHS funding: With just three days until a looming shutdown of the Department of Homeland Security over conservative opposition to President Obama’s executive action on immigration, the president leans into the issue at a forum on immigration in Miami. The event, at 3:45 pm EST, will be hosted by MSNBC’s Jose Diaz Balart. The president’s aggressive posture comes as Republican Senate Leader Mitch McConnell blinked in the showdown with the president over DHS funding. McConnell opened a path to split out the funding bill — it would fund DHS through Sept. 30 — and a separate measure that would be a protest vote against the president’s executive action. It’s not clear at this point what the House will do, but once again, over to you Speaker Boehner.

Is demography destiny? Speaking of immigration, it takes us to the issue of demographics. Hispanics are one of the largest and fastest-growing voting blocs in the country and stand to be a political powerhouse over the next two generations. On Tuesday, two groups that don’t always agree — the left-leaning Center for American Progress and the right-leaning American Enterprise Institute — released a report projecting out demography to 2060. It showed that the country is getting more diverse, more educated and older.

Here are five charts from the report’s data that capture the change:

(1, 2) Majority-Minority states — 2014 vs. 2060: Currently, just four states are majority-minority, places where non-whites are a greater percentage of the population than whites — California, Hawaii, New Mexico and Texas. But by 2060, that will jump to 22 states. 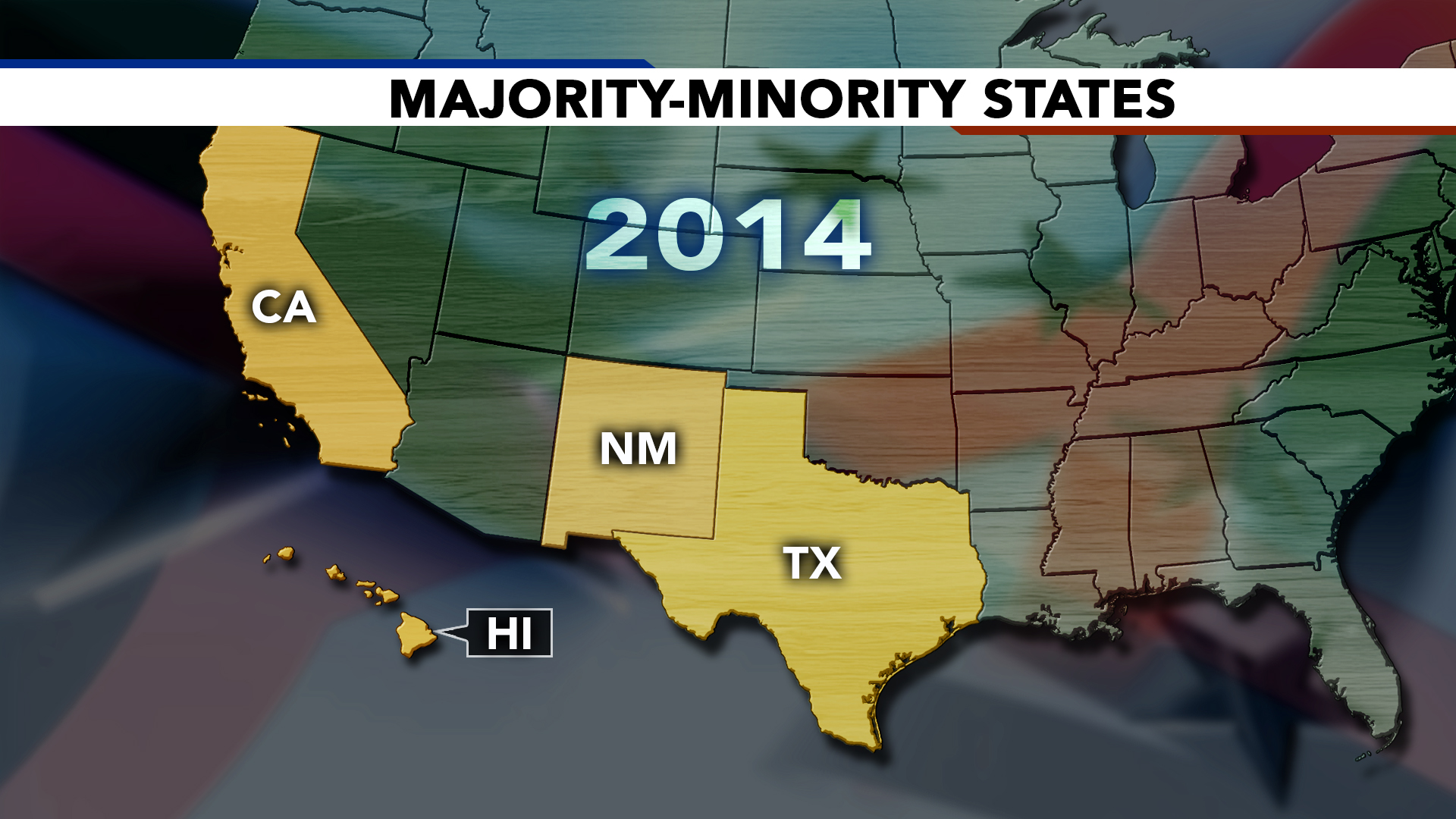 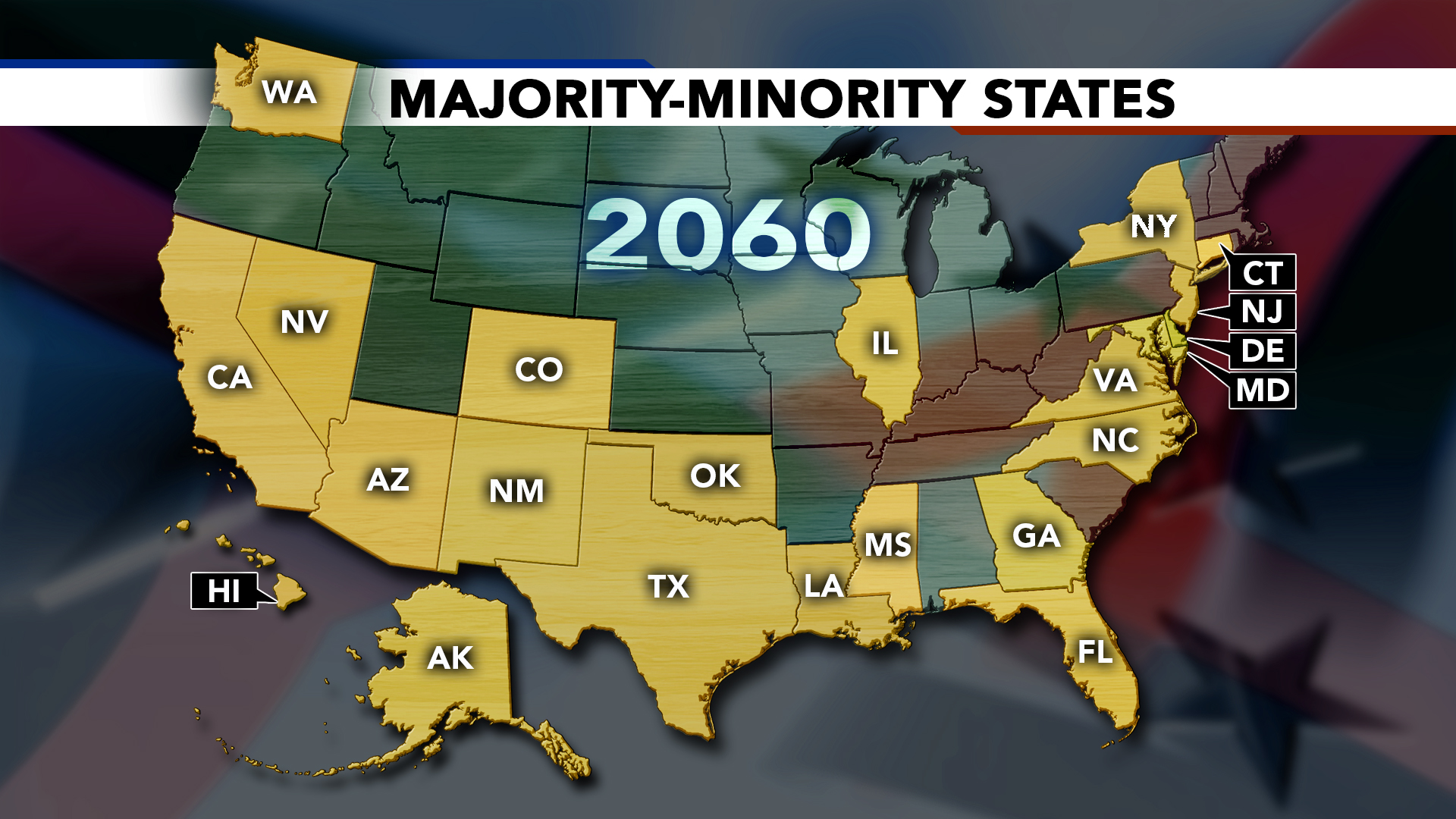 (3) Diversification of children: By 2060, the two groups project that nearly two-thirds of all the children born in the U.S. will be non-white. That is a huge switch from a generation ago when just a quarter of all children were non-white. 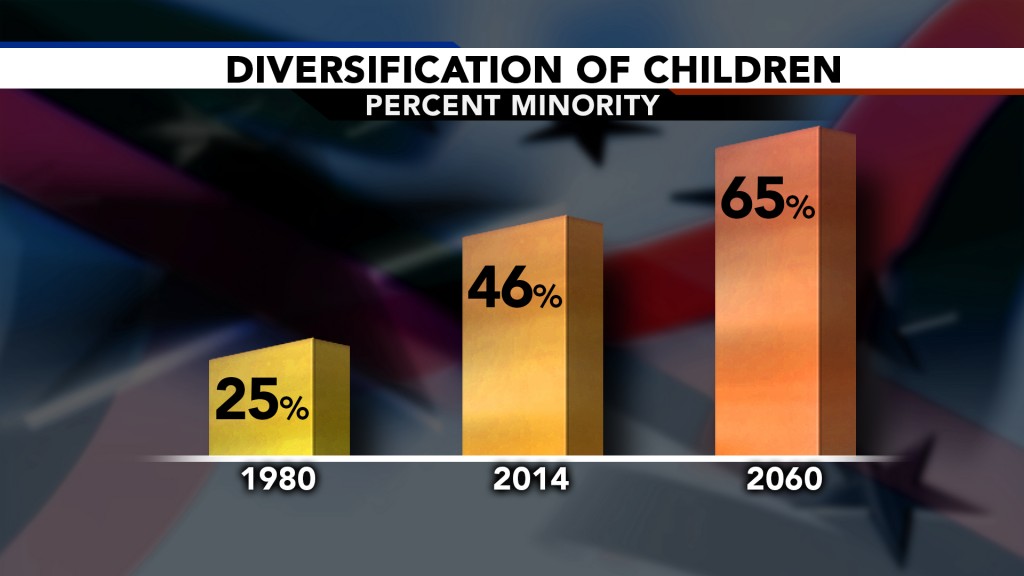 (4) The decline of the white-working class: Whites without a college degree have decreased from 73 percent in 1974 to just 47 percent today. There are a whole host of reasons for that, but if that trend continues, which is likely, it will mean that the class of factory, auto workers and the like, will be a very small percentage of the population. College degrees are more important to job success today than ever before and that is expected to continue. 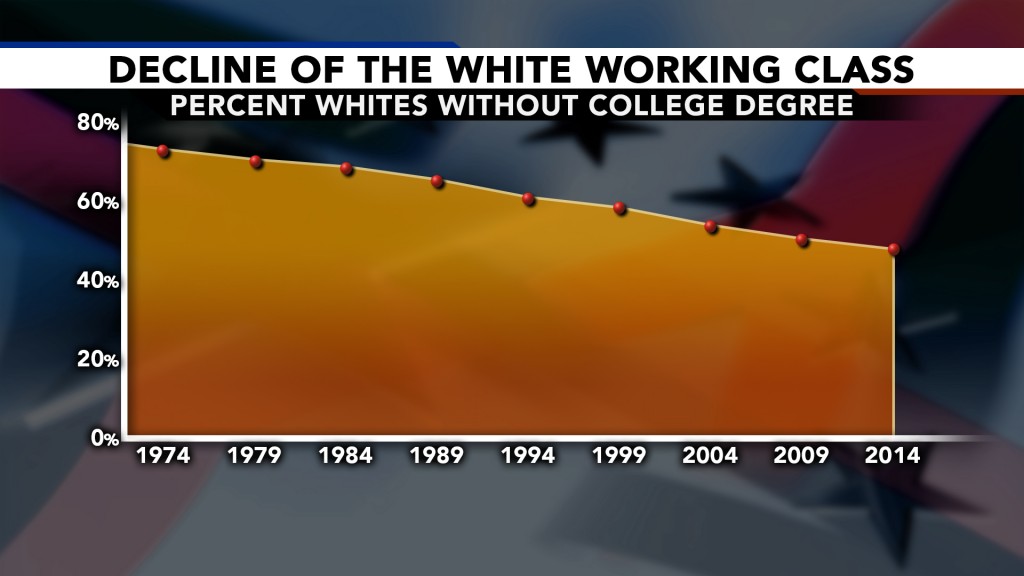 (5) The increase in the unmarried population: The number of people who are unmarried is expected to increase as it has over the past 40 years. That will have a tremendous affect on policymaking. 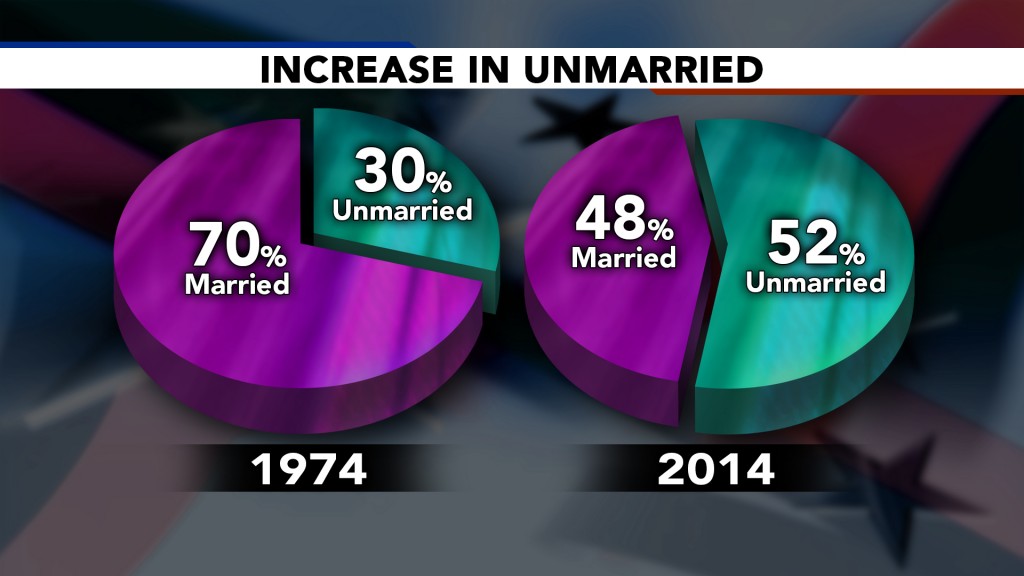 The demography likely helps Democrats in the long term… These numbers present a series of potential hurdles for both political parties. On the face of it, though, the demography favors Democrats. And that is largely true. But Democrats shouldn’t bank on it or take it for granted. Republicans already know the challenge and are going to make a serious play — at some point — for non-white voters. They won’t be able to continue to win with just whites alone. But even though minority voters have trended in Democrats’ favor, things can change. For example, as those new immigrant voter groups become more assimilated, established, and educated, traditional pay-fairness issues Democrats have used to their advantage could lose some of their resonance.

…But Democrats have their own problems: What’s more, Democrats released their own preliminary “autopsy” over the weekend that noted the party has its own demographic problem, especially in midterms, and notably with Southern whites. “In order to win elections, the Democratic Party must reclaim voters that we’ve lost including white Southern voters…,” the Democratic National Committee report stated. The nine-page document, however, gives no prescription for how to do so. In fact, it seems to make the case that all Democrats need to do is package their messaging better. If that sounds familiar, that’s because it sounds a little like Republicans after their much more expansive autopsy following the 2012 presidential election. Remember, (Eric Cantor), whether you’re Domino’s or a local struggling corner pizza place, no one is going to eat your food if you just change the box and not the pizza. Democratic officials caution that the report was just “preliminary” and that the party’s task force will wrap up its work with fuller recommendations in May.

Democratic divide on display in Chicago: But signs of a divide within the party were also on display Tuesday night, when former Obama Chief of Staff Rahm Emanuel failed to cross the 50 percent threshold in the Chicago mayor’s race to avoid a runoff, making him the first incumbent mayor in Chicago history not to avoid a primary runoff. He led Jesus “Chuy” Garcia, a former Alderman and state senator, just 45 to 34 percent, a far higher percentage than Garcia had been expected to get, based on polling. Many Democrats in Chicago, and teachers’ unions in particular, have been upset with Emanuel’s handling of its schools. Randi Weingarten, president of the largest teachers’ union in the country, the American Federation of Teachers, said the result “showed a real yearning for a mayor who listens to working families.” MoveOn called it “a huge win for progressives and working families.” Liberal group Democracy for America, led by Jim Dean, brother of Howard Dean, said it will help Garcia in the next six weeks to “harness that grassroots energy into a broad-based progressive movement that will bring Elizabeth Warren-style, populist progressive reform to Chicago in the years to come.”

Millions of dollars, Obama, weren’t enough to lift Emanuel: It now means six more weeks of campaigning with the runoff April 7. All this, despite a multi-million-dollar campaign waged by Emanuel (he spent $4.7 million in the fourth quarter) AND a last-minute effort by President Obama, who showed up to help Emanuel. In New York, there were and are questions of whether Mayor Bill de Blasio is too liberal for the city. In Chicago, there are questions now of whether Emanuel is too moderate. Let’s be clear, Democrats’ split doesn’t come close to what Republicans have faced between the establishment and the tea party, but splinters are starting to show. The seeds are there, and that rift would grow even wider if Democrats wind up completely out of power. It’s also fascinating that this is happening to Emanuel, the man who led the Democratic charge to take over the House in 2006. With his approach at reaching out to more conservative candidates, the party controlled the House until the 2010 wave that saw them lose 63 seats in mostly those conservative, redrawn districts. But his tactics and message irked some party loyalists, who thought he was straying too far from the party’s core values.

Daily Presidential Trivia: On this day in 1793, President George Washington held the first Cabinet meeting. Who were the four original members of Washington’s cabinet? Be the first to tweet us the correct answer using #PoliticsTrivia and you’ll get a Morning Line shout-out. Congratulations to Shawn Sullivan (@ShawnSull) for guessing Tuesday’s trivia: Why was President Andrew Johnson impeached? The answer: for Violating the Tenure of Office Act by removing Edwin Stanton as Secretary of War.

When the Huntsman becomes the hunted @StevenTDennis pic.twitter.com/3TEuHWeK6X

This is the best the Internet will ever be, I am quitting my job so I can spend more time watching this Vine https://t.co/vphm6jzFZw

Leslie Knope and VP Biden together one last time. Congrats to Parks and Rec on tonight’s finale. #ParksFarewell pic.twitter.com/3K3I98Lwme

Left: The face of America, seen in its younger generations, is changing. By 2060, it is projected that nearly two-thirds of all the children born in the U.S. will be non-white. Photo of then-candidate Barack Obama at Dartmouth College in 2008 by Jason Reed/Reuters