Special counsel Robert Mueller’s report paints a fuller picture of what he called Russia’s “sweeping and systemic” interference in American democracy, and when and how Russians communicated with Trump campaign associates.

And though the report said that investigators did not find evidence of coordination or conspiracy, Mueller’s team observed that the Trump campaign and Russian operatives seemed at times to be working on similar missions simultaneously — but individually.

Here’s a look at some of the new revelations about Russia in the Mueller report.

The Internet Research Agency communicated with Trump’s campaign, but campaign officials did not realize foreign nationals were behind the requests.

In the report, Mueller’s team provided some new details to bolster that its conclusions about Russian activities on social media, particularly those focused on two Russian organizations that carried out most of the interference campaign.

The report says investigators had no evidence to indicate “any Trump Campaign official understood the requests were coming from foreign nationals.”

The actions of the main group, the St. Petersburg-based Internet Research Agency, which conducted online influence campaigns on behalf of the Russian government, were already well-documented before the redacted report’s release. In February 2018, the Department of Justice indicted Yevgeny Prigozhin, the IRA’s financial backer and an ally of Russian President Vladimir Putin, as well as 12 IRA employees.

Mueller’s full report reveals that the group was in direct communication with people in Trump’s orbit beginning in June 2016. That included specific requests to Trump associates, including for campaign “signs and other materials to use at rallies” and “requests to promote the rallies and help coordinate logistics.”

But the report says investigators had no evidence to indicate “any Trump Campaign official understood the requests were coming from foreign nationals.”

The report also says the IRA staged dozens of political rallies in the United States beginning in November 2015 — earlier than had been previously disclosed — and that the rallies continued even after the election was over.

The second part of the Mueller Russia inquiry was about hacking by the Russian intelligence agency known as the GRU. The Department of Justice detailed the GRU’s offenses in its July 2018 indictment of 12 officials who hacked into the computer networks of Democratic Party committees and Hillary Clinton’s presidential campaign and shared that information online.

The report reveals that the GRU targeted 15 email accounts connected to Clinton’s personal office — apparently for the first time — within five hours of a Trump campaign rally during which he urged Russia to find 30,000 missing emails from Hillary Clinton’s private server.

“Russia, if you’re listening, I hope you’re able to find the 30,000 emails that are missing,” he said during a July 27, 2016 rally. “I think you will probably be rewarded mightily by our press,” Trump said he added.

In written answers to Mueller’s questions, released in the report, Trump said that he was speaking “in jest and sarcastically, as was apparent to any objective observer.”

READ MORE: Trump asked Russia to find Clinton’s emails. On or around the same day, Russians targeted her accounts

The report said that the Clinton email hack after Trump’s speech appeared to be the GRU’s first attempt to compromise accounts hosted on the Clinton domain. According to the document, it is unclear how the GRU was able to identify the email accounts because they were not public. 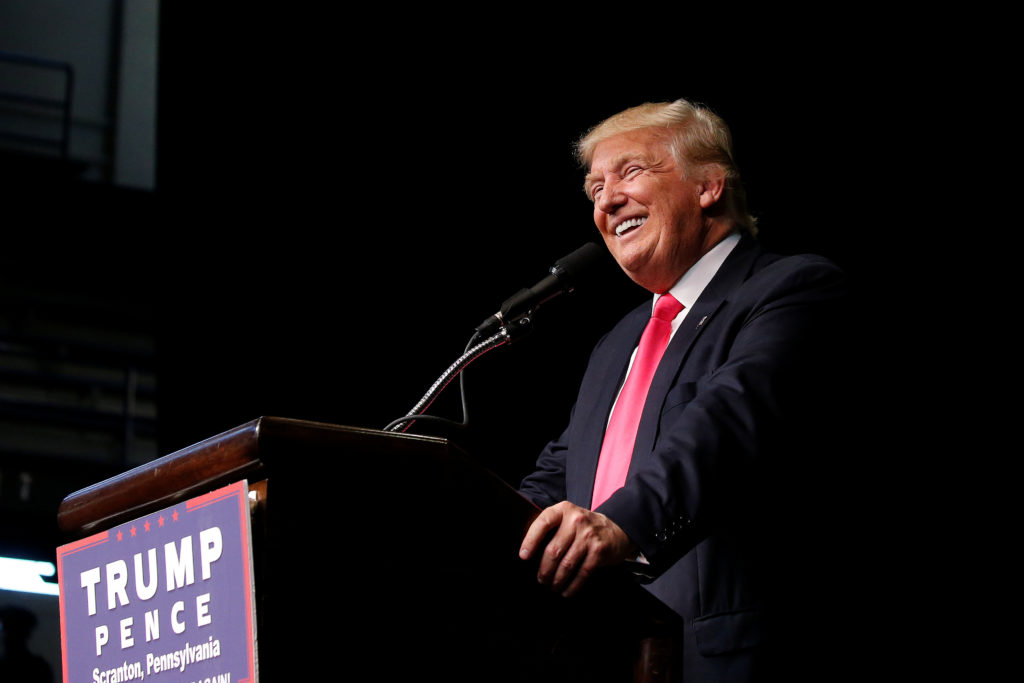 Then-Republican presidential nominee Donald Trump speaks at a campaign rally in Scranton, Pennsylvania, on July 27, 2016, where he called on Russia to seek Hillary Clinton’s emails. Photo by REUTERS/Carlo Allegri

Trump sought the same material as Russia, but wasn’t working with them to get it.

Mueller’s team noted that Trump “repeatedly” asked his campaign officials to find the 30,000 Clinton emails he had referenced in his campaign rally address. Michael Flynn — who briefly served as Trump’s national security adviser before resigning and pleading guilty to lying to the FBI about conversations he had with the Russian Ambassador Sergey Kislyak — subsequently contacted several people in an effort to find the emails. This effort proved unsuccessful.

Trump said he was unaware of Russian meeting overtures.

The report said that Trump received an official government invitation to attend a conference in St. Petersburg in June 2016 — around the same time Russian operatives were ramping up their communication with Trump officials and work against the campaign of Hillary Clinton.

In a written response to questions about Russian officials’ efforts to meet with him, Trump said that his assistant, Rhona Graff, had received an email from someone purporting to be Sergei Prikhodko, a Russian politician and former deputy prime minister, with an invitation to attend the St. Petersburg International Economic Forum. Graff prepared a brief response declining the invitation for Trump’s signature.

Trump also expanded on what he had previously asserted was ignorance of the June 9, 2016, meeting at Trump Tower involving several Trump officials and Russian lawyer Natalia Veselnitskaya. The gathering had originally been pitched as a discussion about negative information on Hillary Clinton.

“I have no recollection of learning at the time that Donald Trump, Jr., Paul Manafort, or Jared Kushner was considering participating” in the meeting, the president wrote. “Nor do I recall learning during the campaign that the June 9, 2016 meeting had taken place, that the referenced emails existed, or that Donald J. Trump, Jr., had other communications with Emin Agalarov or Robert Goldstone between June 3, 2016 and June 9, 2016,” he added, referring to his son who attended the meeting and two intermediaries who helped set it up.

There are new details about Jared Kushner’s interactions with a well-connected, Russian-born think-tanker.

The Mueller report also sheds light on interactions between Trump son-in-law and campaign adviser Jared Kushner and Dimitri Simes, the Russian-born director of the Center for the National Interest, a foreign policy think tank connected to the late former President Richard Nixon. Simes emigrated to the United States in 1973.

Simes, who the report notes maintains high-level Russian connections, provided some behind-the-scenes advice and logistical support to the Trump campaign through Kushner, at one point facilitating a brief meeting between Trump, Kushner and Kislyak. According to the report, Kislyak told Kushner: “We like what your candidate is saying … it’s refreshing.”

The report says Simes also provided Kushner with information about “‘highly questionable connections between [former president] Bill Clinton’ and the Russian government,” but both Simes and Kushner told the special counsel that the Trump campaign never did anything with the information.