5 takeaways from the first 2020 Democratic debate

MIAMI, Florida — Viewers hoping for a better understanding of the differences in the Demorcatic primary field likely came away underwhelmed from the first 2020 primary debate. The 10 Democrats on night one in Miami largely agreed on the issues, though differences on the details emerged in health care and immigration policy.

Sen. Elizabeth Warren, the top-polling Democrat on Wednesday night’s stage, featured prominently in the first half of the debate, before the attention shifted more equally among her rivals. Some candidates who have been at the bottom of the polls stood out, perhaps most notably former Housing Secretary Julián Castro. Others struggled to have big moments, though the moderators tried to give every person a chance to speak.

Here are five key themes from the first 2020 Democratic debate, and what they can tell us about the larger race.

Democrats agree on the economy. But do Americans agree with them?

The Democrats’ message appears out of sync with the way most Americans view the economy.

The candidates all voiced a similar economic message, centered on making the economy work for all Americans, not just the wealthy. Warren, who was asked the first question on the issue, said the economy was doing well for a “thin slice” at the top, and called for “structural change” to make corporations less powerful. Others used nearly identical language to make the same point. New Jersey Sen. Cory Booker also said corporate power should be reined in, while arguing that the economy was “not working for average Americans.” Former Texas Rep. Beto O’Rourke said the economy “has got to work for everyone.”

Yet the Democrats’ message appears out of sync with the way most Americans view the economy. According to a recent CNN poll, 71 percent of Americans believe the economy is in “good shape.” And polls also show a majority of Americans think President Donald Trump is handling the economy well. If that level of support holds, Democrats may find it hard to make the case that the country needs to go in a different direction.

The candidates had mixed success discussing health care, which has long ranked as one of the top two issues for their voters. Moderators first asked candidates if they supported abolishing private health insurance in favor of a government-run health care system. Two of the 10, Warren and New York City Mayor Bill de Blasio, raised their hands in support . The crowd cheered. Those who answered yes were not asked to say more (though Warren did).

In a poll from February, only one in 10 registered voters favored a Medicare for All-type of health care if that meant eliminating private insurance, according to a Hill-HarrisX survey. 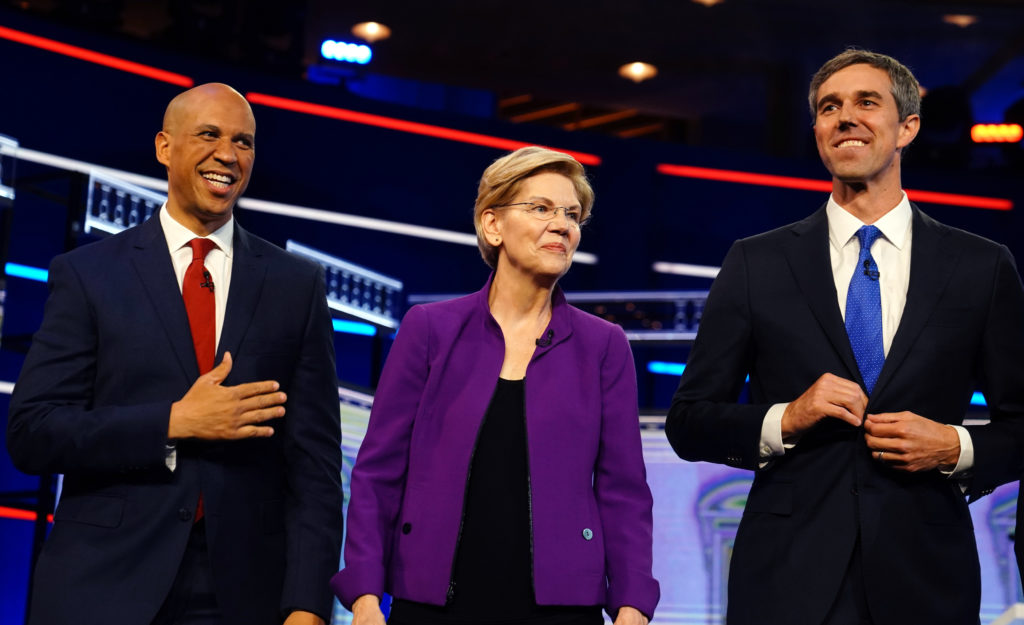 Other Democrats struggled to explain their positions. “Getting to universal health care as soon as possible has to be our goal,” O’Rourke said. But the former congressman didn’t define what he meant by “universal health care,” which can have different meanings to different politicians, nor did he explain clearly how he would incrementally get to that goal. Likewise, Booker opened his answer by saying that he believed the “best way is Medicare for All.” He did not elaborate on what that meant, nor on why he would maintain a private health system.

Minnesota Sen. Amy Klobuchar came closest to addressing the nuance in a straightforward way. “I’m concerned about kicking half of America off health care in four years,” she said. Later, though, she too struggled to explain why she was both for some form of government-run universal health care in the future, but against it now.

Warren dominated the first portion of the debate, in part because she received more questions and follow-ups in the first half-hour than any other candidate. The additional airtime, combined with Warren’s position at the center of the stage and her high polling numbers, reinforced her status as the leading Democrat among first night candidates in Miami.

The Massachusetts senator helped her own cause by staying on message about the economy, keeping her answers concise, and providing some policy specifics without getting too far into the weeds. Warren was unapologetic about embracing liberal policies while coupling her ideas with practical solutions — a combination that will appeal to the party’s progressive base, but also aims at winning over more moderate voters.

With so much focus on her Wednesday, Warren faced extra pressure to avoid a major mistake — a task she accomplished. But Warren also had the luxury of not facing off against any of the other four top-polling Democrats in person. The real test will come when she is paired in future debates with the other leading Democrats.

Did anyone have a breakout moment?

After making a strong argument for reforming the nation’s immigration laws, Castro began trending on social media. Castro also made several references to protecting the rights of transgender people and women, among others, saying at one point that, “If I’m elected president, everyone will count.” It was a subtle jab at Trump without invoking him by name.

Booker, another candidate who has trailed in the polls, delivered a solid performance on the topics of gun violence and civil rights.

Both also spoke Spanish on the debate stage — but not before O’Rourke, who answered two questions (on the tax rate and immigration) in his second language.

But it’s unclear if the debate will be enough to lift Booker and Castro to greater popularity. The evening showed how difficult it is for candidates to break out in such a crowded field. By now, the primary season has been underway for months, and a narrative around the primary race is already taking shape, with much of the focus on the three or four Democrats at the top.

Did any of the underdogs stand out?

On either end of the stage stood the four lowest-polling candidates: De Blasio and Ohio Rep. Tim Ryan on the left; Washington Gov. Jay Inslee and former Maryland Rep. John Delaney on the right.

De Blasio and Ryan repeatedly tried to stand out by being more assertive and using pounding, sometimes angry-sounding rhetoric. De Blasio was the first candidate to interrupt anyone, moving in as O’Rourke talked about health care. Ryan repeatedly used robust, emotionally heavy language, at one point pointing to reports of mistreatment of migrant children in U.S. care, claiming they found “kids laying in their own snot with three-week-old diapers that haven’t been changed.” 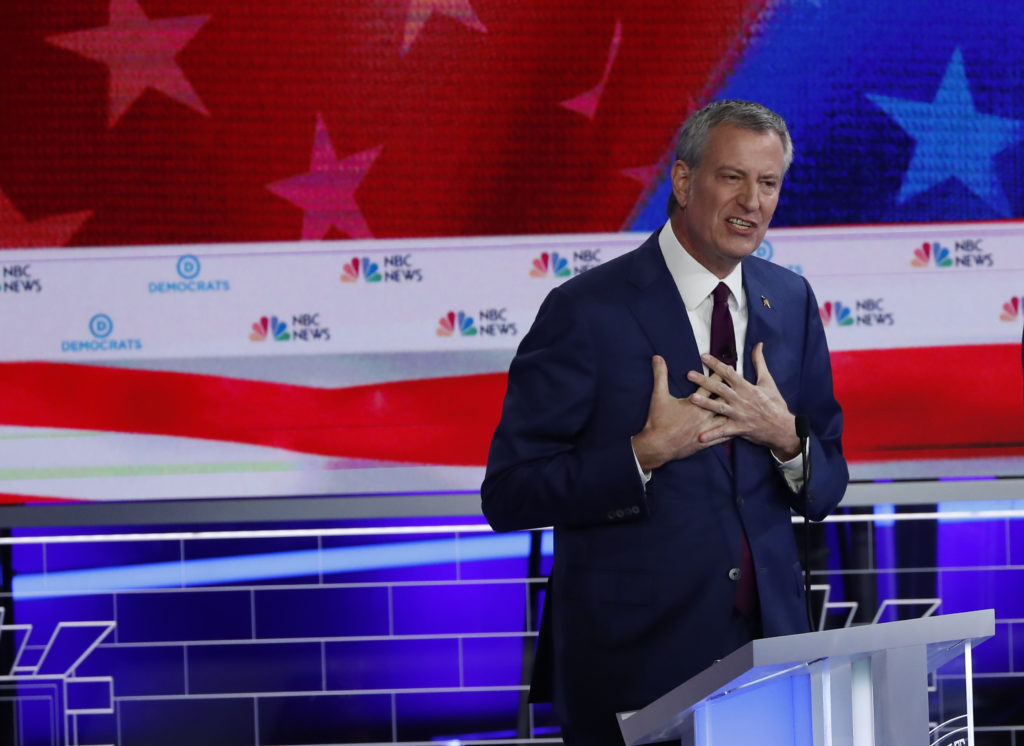 For both men, this overshadowed their greater message: that the Democratic Party needs to put working class Americans back at the center. (De Blasio did have a compelling moment when he told Americans concerned about falling behind that “the immigrants didn’t do that to you — the big corporations did that to you.”)

While Inslee had a few notable quotes, he too aimed for a mostly strident tone.

Of the four, the one standout seemed to have a different strategy. Delaney repeatedly spoke in measured but deliberate tones, a strategy that helped him wrest away the health care conversation from De Blasio. “We need to talk about [what] we are going to do,” Delaney told viewers. The comment doubled as a simple summation of the challenge facing all of the candidates.

Which candidates are most likely to take a risk in 1st Democratic debate?