5 takeaways from the VP debate

The showdown between Vice President Mike Pence and Sen. Kamala Harris was far more civil than the first presidential debate last week. But the candidates’ demeanors belied the tension between the campaigns.

Their answers to the moderator’s questions, and the questions they chose not to answer, spoke volumes.

Pence dodged questions much more frequently than his opponent, instead launching counter-attacks against Harris and her running mate, former Vice President Joe Biden, the Democratic presidential nominee. But Harris also sidestepped questions at times, most notably on the issue of whether she supported adding justices to the Supreme Court if President Donald Trump’s nominee is confirmed.

Each seemed intent on sticking to their strengths and nailing their opponent on key points of contention between the two campaigns. Pence did so stone-faced, regularly talking over the moderator’s repeated attempts to stop him when his time was up. Harris stuck closer to the rules, but still managed to land her blows.

It’s unlikely the vice-presidential debate will move the needle with voters in an election centered on Trump and his handling of the coronavirus pandemic.

But with two septuagenarians at the top of their parties’ tickets, and the incumbent recently hospitalized with a potentially deadly illness, the role of number two has taken on renewed importance.

Here are takeaways from the Pence-Harris debate.

Pence did not answer the toughest questions

In the second half of the debate, Pence asked Harris if she and Biden would support expanding the Supreme Court. When she dodged the question, Pence pointedly repeatedly called her out. “You’ve refused to answer the question,” he said, asking that the record reflect that.

But throughout the debate, it was Pence who regularly avoided answering questions, often with hard-to-miss pivots to other subjects.

If Roe v. Wade was overturned, should his home state of Indiana ban abortion? Pence’s response to this question was to instead address the U.S. killing of Iranian commander Qassem Soleimani and then accuse Democrats of attacking Supreme Court nominee Amy Coney Barrett’s faith. 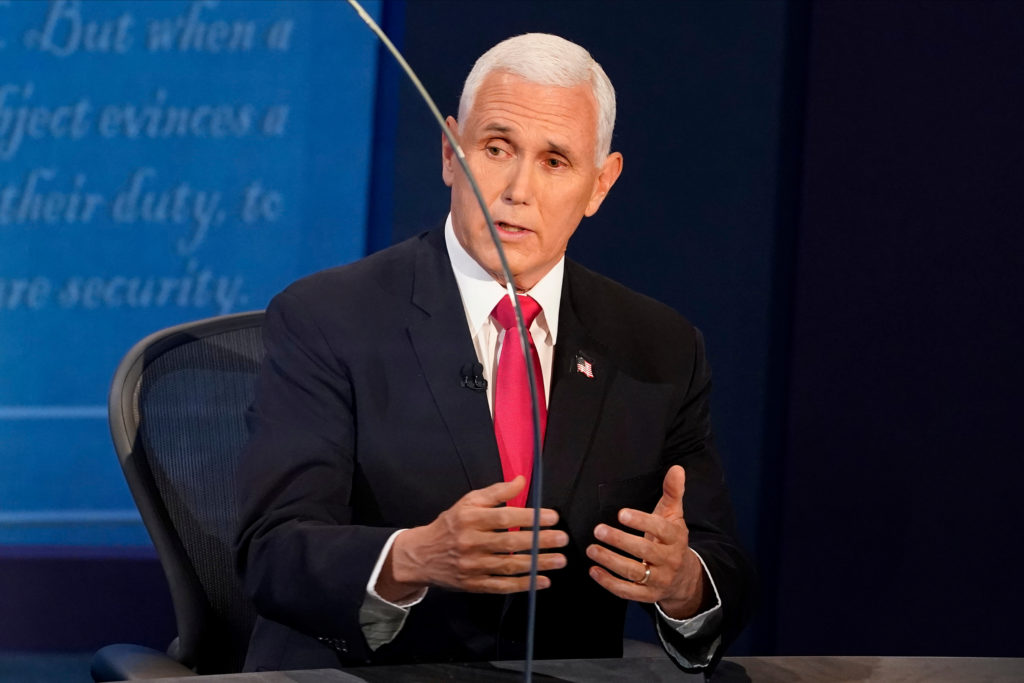 Vice President Mike Pence regularly talked over the moderator’s repeated attempts to stop him when his time was up. Sen. Kamala Harris stuck closer to the rules, but still managed to land her blows. Photo by Morry Gash/Pool via REUTERS

What about Russian interference in the 2016 election? Pence responded not with an answer to that question, but about the decision to move the U.S. embassy to Jerusalem and again to the Soleimani killing. Nothing about Russia.

What is the president’s oft-referenced but not-yet-seen plan to protect Americans with pre-existing conditions? “I couldn’t be more proud to serve as vice president to a president who stands without apology for the sanctity of life,” Pence said, referring to the issue of abortion. He did not address any Trump health care plan.

Is climate change manmade? Here Pence stayed on topic, focusing on the environment at large, but didn’t answer the question, instead posing one of his own. “The climate is changing,” he acknowledged, “but the issue is what’s the cause and what do we do about it?”

A sharp contrast on criminal justice reform and climate change

The debate offered some clear policy differences between Harris and Pence and by extension the Republican and Democratic parties. Near the end of the debate, both candidates were asked if justice was served in the case of Breonna Taylor, a Black woman who was fatally shot by police in Louisville, Kentucky. Harris said no, and criticized a grand jury’s decision not to bring murder charges against officers involved. She went on to detail a criminal justice reform plan, and said both she and Biden believed that systemic racism was a serious issue in American life that must be addressed.

In contrast, Pence said he trusted the system and the grand jury that made an assessment on the charges. The vice president also said Harris and Biden’s calls for criminal justice reform disrespected the work done by police officers to keep Americans safe.

Pence shied away from the strident law-and-order rhetoric used by Trump in the first presidential debate last week, on Twitter and in nearly every public appearance he has made in recent months. But his message echoed Trump’s, and reflected a deep divide in the United States over race and policing after months of protest following the police killings of Taylor, George Floyd and other Black Americans.

The candidates also sparred on climate change, with Harris criticizing the Trump administration for pulling the U.S. out of the Paris Climate accord. Pence argued that Harris and Biden backed a Green New Deal-style plan to cut carbon emissions that would stymie economic growth.

Polite with a side of rough elbows

Interruptions at the debate Wednesday were kept to a minimum, at least when compared to last week’s debate when Trump rarely allowed Biden or the moderator to finish a thought. There was no name-calling by Pence or Harris, another departure from the first debate. 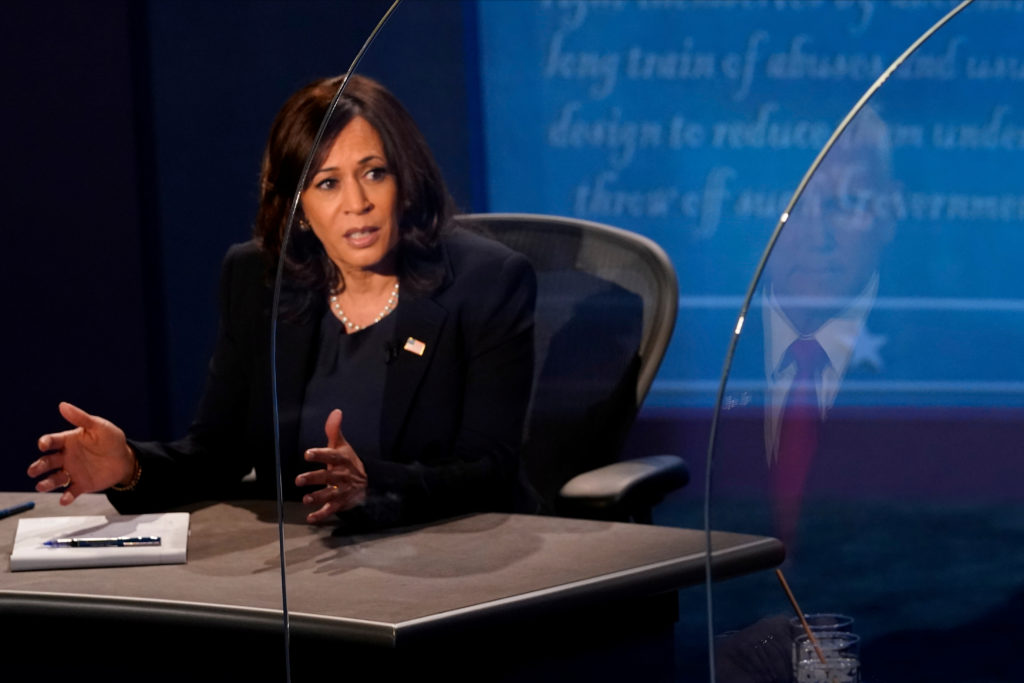 Despite giving an altogether calmer, more even-tempered performance than their running mates last week, there were still plenty of moments of tension between Vice President Mike Pence and Sen. Kamala Harris at their debate. Photo by Morry Gash/Pool via REUTERS

Yet despite giving an altogether calmer, more even-tempered performance than their running mates last week, there were still plenty of moments of tension between Pence and Harris. The debate began on a polite note but the sharp elbows came out in the very first segment, about the coronavirus, with Harris characterizing the Trump administration’s response to the pandemic as an abject failure. Pence, who heads the White House Coronavirus Task Force, disagreed, leading to several tense exchanges.

The vice president also interrupted Harris several times, and ignored the moderator’s attempts to stop him from continuing to speak when his allotted time was up. Harris rebuked Pence at one point, telling him, “If you don’t mind letting me finish, we can have a conversation.” But Pence got in a few jabs as well, repeatedly telling Harris that she was entitled to her opinion but not to the facts.

Toward the end of the night, there was the rise of an unexpected social media star: a fly that landed on Pence’s head during one of his answers.

The Biden campaign saw the moment trending and quickly purchased, and tweeted about, a website inspired by the drop-in guest: FlyWillVote.com, which sent readers to IWillVote.com, a hub for Democrats’ get-out-the-vote effort.

So popular was the little insect (on Twitter) that Democrats asked people to tamp down the fly talk. “The fly is funny, it really is,” wrote Sawyer Hackett, a spokesperson for former presidential candidate Julian Castro. “But @KamalaHarris had an amazing debate and I hope it doesn’t distract from how poised, prepared” she was.

Debate or interview? Whichever, it was an improvement

What a change a debate makes. While the number two’s did interrupt on occasion, there was a marked change in respect level and digestible answers over the debate between their top-of-ticket running mates.

This was partially the demeanor of the people on stage. There was no Trump, who brags about his ability to disrupt. But it was also tied to the approach of the moderator. “We want a debate that is lively, but Americans also deserve a discussion that is civil,” Susan Page of USA Today said in her opening remarks.

Page altered the format from that of last week’s presidential debate. Instead of asking one question, allowing each candidate two minutes to answer and then opening up a longer section of time where candidates could speak at will, Page continued to focus nearly all of the time in an effort to keep the candidates on track.

She would ask an initial question on a topic directed at a single candidate, then the same or a different question to the other once the first finished, then a third and sometimes a fourth or fifth. And she repeatedly reminded candidates of time limits with a simple “Thank you. Your time is up. Thank you.”

This focused the candidates and limited cross-talk. But was it a smartly run interview and not a debate?

It may not matter. It was certainly easier to digest.