WASHINGTON — In their boisterous presidential debate, several Democrats sold short the health care plans of rivals or glossed over aspects of their own record. In an audacious league of his own, President Donald Trump celebrated the elimination of a tax that still exists and went deep and wide in distorting what he’s done in office.

A sampling from the past week:

TRUMP: “We got rid of it. No more death tax, no more inheritance tax.” — Colorado rally Thursday.

THE FACTS: False. The “death” tax is still alive.

He’s referring to the estate tax, also known as the inheritance tax. He didn’t get “rid of it.”

The 2017 tax overhaul doubled the threshold at which the estate tax gets levied. A couple worth less than $22.4 million would avoid the tax. But the increase of the threshold isn’t permanent. It’s set to expire in 2026.

TRUMP, on the effects of the estate tax on people inheriting family farms: “You know what? They go out and they would borrow a lot of money and they would lose the farms. The number is staggering.” — Colorado rally.

THE FACTS: He’s inflating the peril to family farms from the estate tax, which is aimed at the hugely wealthy. After his 2017 tax cuts, the Agriculture Department published estimates that 38,106 farm estates would be created in 2018. Of those, only 230 would have to file an estate tax return and only 133 would have any estate tax liability.

TRUMP: “If our formally targeted farmers need additional aid until such time as the trade deals with China, Mexico, Canada and others fully kick in, that aid will be provided by the federal government, paid for out of the massive tariff money coming into the USA!” — tweet Friday in all capital letters.

THE FACTS: That’s a flatly false account of where the money for the farm subsidies comes from. It comes from U.S. taxpayers. There is no “massive tariff money coming into” the country, from which the subsidies could be drawn.

Since the start of his trade war with China, Trump has been consistently deceptive about who is paying for it. Tariffs are principally paid by U.S. importers and those costs are usually passed on to consumers in the form of higher prices for goods. China and other exporters are not cutting the U.S. a check. The money to help farmers hurt by the trade war comes from the U.S. treasury at the expense of other federal programs and the debt. 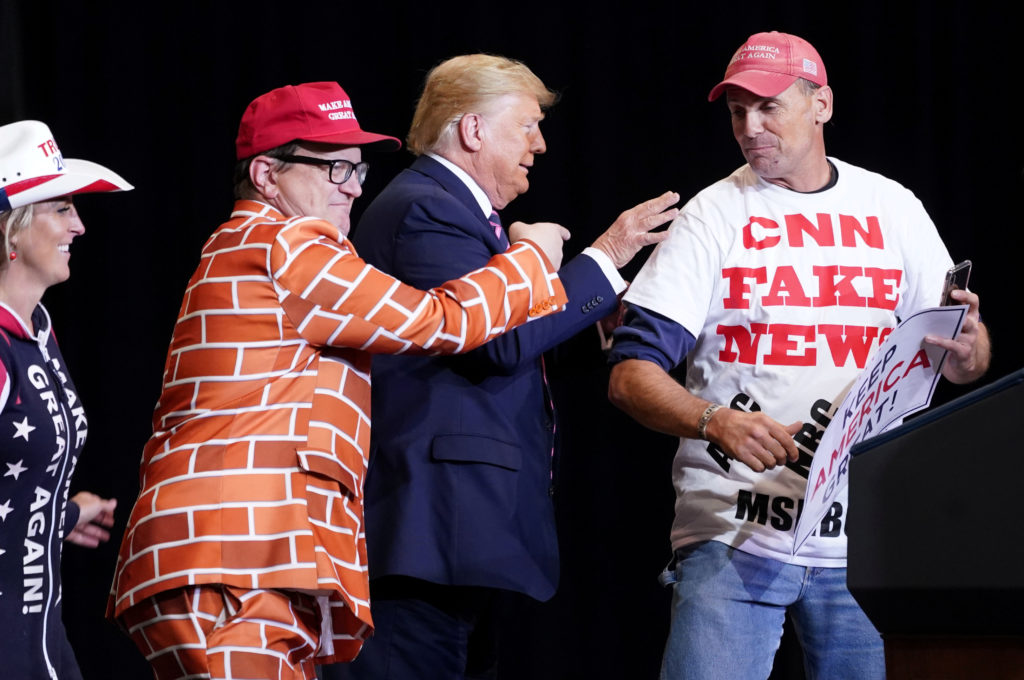 U.S. President Donald Trump talks with supporters that he called up on to the stage during a campaign rally at the Las Vegas Convention Center in Las Vegas, Nevada, U.S., February 21, 2020. Photo by Kevin Lamarque/Reuters.

DEMOCRATIC PRESIDENTIAL CANDIDATE MIKE BLOOMBERG, on the stop-and-frisk policing policy when he was New York mayor: “What happened, however, was it got out of control and when we discovered — I discovered — that we were doing many, many, too many stop and frisks, we cut 95% of them out.” — Democratic debate Wednesday.

THE FACTS: He’s misrepresenting how stop and frisk declined. That happened because of a court order, not because Bloomberg learned that it was being overused.

The former mayor defended the practice even after leaving office at the end of 2013 and only apologized for it a few weeks before declaring his candidacy for presidency.

BLOOMBERG, citing his philanthropy’s work with the Sierra Club: “Already we’ve closed 304 out of the 530 coal fire plants in the United States, and we’ve closed 80 out of the 200 or 300 that are in Europe.” — Democratic debate.

THE FACTS: He’s wrongly taking credit for driving the U.S. coal industry to its knees.

The U.S. coal industry’s plunge is largely due to market forces, above all drops in prices of natural gas and renewable energy that have made costlier coal-fired power plants much less competitive for electric utilities. Bloomberg has indeed contributed huge sums to efforts to close coal plants and fight climate change, but against the backdrop of an industry besieged on other fronts.

U.S. coal production peaked in 2008, but since then has fallen steadily. That’s due largely to a boom in oil and gas production from U.S. shale, begun under the Obama administration, that made natural gas far more abundant and cheaper, and falling prices for wind and solar energy, partly because of improving technology in the renewable sector.

The U.S. Energy Information Administration reaffirmed in a report in December the extent to which the market has turned away from coal. 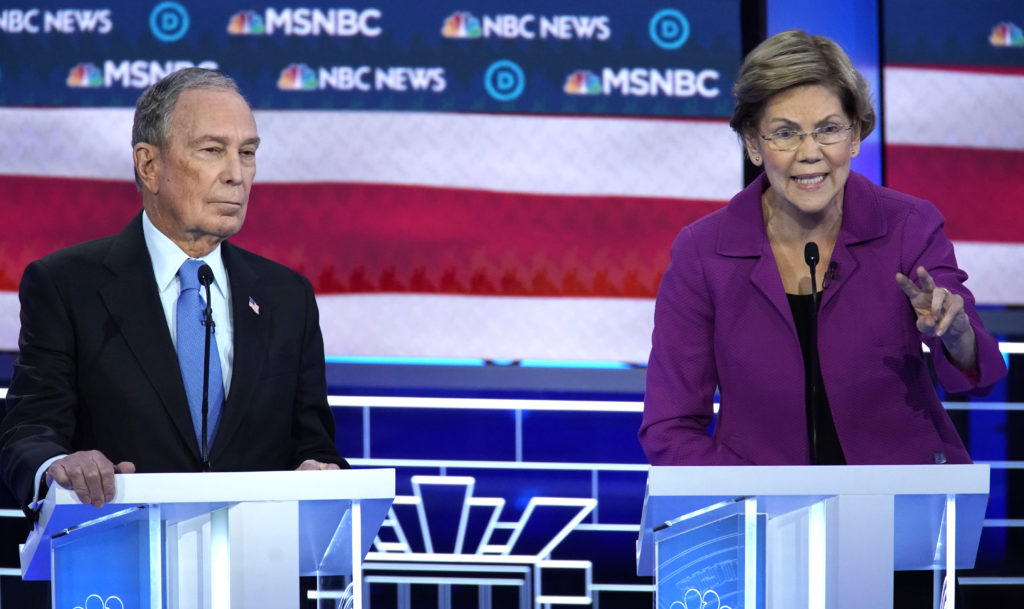 TRUMP, on Sanders’ “Medicare for All” plan: “Think of this: 180 million Americans are going to lose health care coverage under this plan. But if you don’t mind, I’m not going to criticize it tonight. Let them keep going and I’ll start talking about it about two weeks out from the election.” — Arizona rally Wednesday.

THE FACTS: That’s a thorough misrepresentation of the Sanders plan as well as similar plans by Democrats in Congress. People wouldn’t “lose” coverage. Under Sanders, they would be covered by a new and universal government plan that replaces private and job-based insurance. Democrats who stop short of proposing to replace private and job-based insurance would offer an option for people to take a Medicare-like plan, also toward the goal of ensuring universal coverage.

WARREN on Klobuchar’s health plan: “It is like a Post-it note, insert plan here. … Amy, I looked online at your plan. It’s two paragraphs.” — Democratic debate.

THE FACTS: That’s not true. Klobuchar’s health care policies run thousands of words online, addressing coverage, substance abuse and mental health, prescription drugs and the elderly. Some of her material lacks specifics found in the plans of several of her rivals. Yet aspects of her agenda are grounded in detailed legislation led or supported by the senator from Minnesota.

It’s true that Klochuchar’s main health policy page devotes two paragraphs to summarizing her way of achieving universal coverage. But that’s not the extent of her plan.

SANDERS, to Buttigieg: “Let’s level, Pete. Under your plan, which is a maintenance continuation of the status quo. …“ — Democratic debate.

WARREN: Buttigieg’s health care plan is “not a plan. It’s a PowerPoint.”

THE FACTS: It’s more than the status quo and more than a PowerPoint presentation. Buttigieg’s plan would cover almost all U.S. citizens and legal residents, even if it’s not as far reaching as the proposals of Sanders and Warren.

An analysis of health care overhaul plans by the Urban Institute and the Commonwealth Fund found that an approach like the one advocated by Buttigieg would reduce the number of uninsured people from more than 32 million to less than 7 million. Those 7 million or so would mainly be people who are in the country illegally.

The proposal from Buttigieg features a new government-sponsored “public option” plan that even people with employer-sponsored coverage could join voluntarily.

Warren’s put-down of Buttigieg’s plan comes after she reconsidered her own approach to Medicare for All, deciding to proceed in stages. She would first expand coverage by building on existing programs and postpone the push for a system fully run by the government until the third year of her presidency. 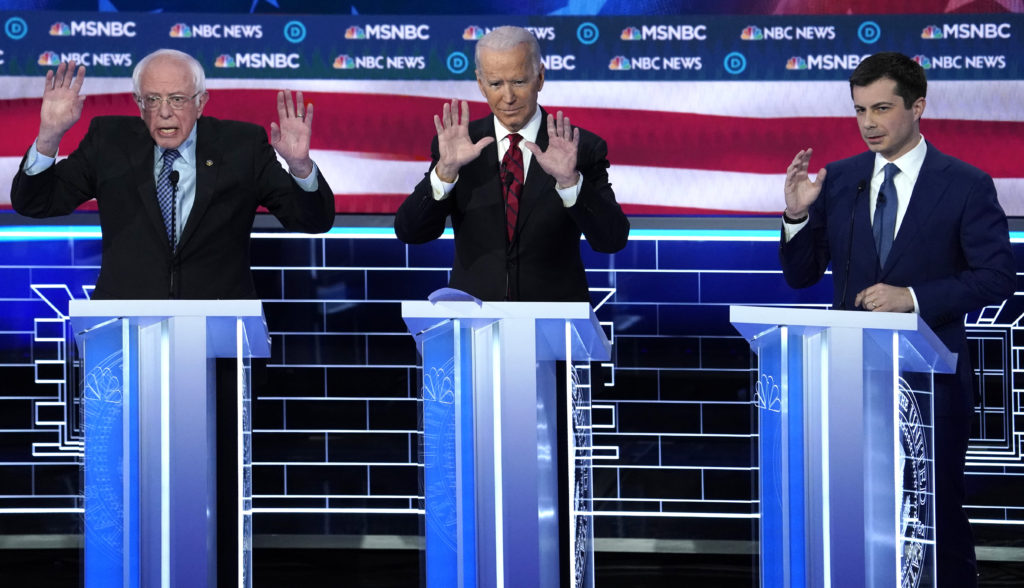 TRUMP: “We are now offering plans that are up to 60% less expensive than they were, and it is better health care.” — Arizona rally.

THE FACTS: Cheaper, yes. But not cheaper and better.

The bargain health insurance plans Trump talks about are cheaper because they skimp on benefits such as maternity or prescription drug coverage and do not guarantee coverage of preexisting conditions.

The short-term plans the Trump administration is promoting as an alternative to the Affordable Care Act provide up to 12 months of coverage and can be renewed for up to 36 months.

Premiums for the plans are about one-third the cost of fuller insurance coverage. They’re intended for people who want an individual health insurance policy but make too much money to qualify for “Obamacare” subsides.

THE FACTS: Not really. People with preexisting medical problems have health insurance protections because of Obama’s health care law. As Trump notes, he is trying to dismantle it.

He and congressional Republicans say they would put new protections in place, but they have not spelled them out.

With Obama’s law still in place, preexisting conditions continue to be covered by regular individual health insurance plans. Insurers must take all applicants, regardless of medical history, and charge the same standard premiums to healthy people and those who had medical problems before or when they signed up.

Before the Affordable Care Act, any insurer could deny coverage — or charge more — to anyone with a preexisting condition who was seeking to buy an individual policy.

TRUMP, on one of the people who benefited from his round of pardons and sentence commutations: “Rod Blagojevich did not sell the Senate seat. He served 8 years in prison, with many remaining. He paid a big price. Another Comey and gang deal!” — tweet Wednesday.

THE FACTS: That’s misleading at best. The FBI closed in on Blagojevich when he was trying to make the sale. He was convicted of trying to sell an appointment to President Barack Obama’s former Senate seat as well as trying to shake down a children’s hospital. Trump commuted the sentence of the former Illinois governor on Tuesday.

James Comey, the FBI director fired by Trump, had nothing to do with the case. Comey was working in the private sector when Blagojevich was indicted, tried and convicted. As for Comey’s “gang,” Patrick Fitzgerald, the federal prosecutor who brought the case against Blagojevich, is a Comey friend and one of his lawyers.

“While the president is in charge constitutionally, as a matter of good policy, presidents have kept law enforcement at arms length,” said John Yoo, a University of California at Berkeley law school professor and Justice Department lawyer during President George W. Bush’s Republican administration. “Neutrality in law enforcement is important if the government is to have the credibility and integrity to convince judges and juries, who are the ones who ultimately render the verdict.”

Martin Lederman, a Georgetown law professor and former Obama Justice Department official, said on Twitter that Congress, not the president, gives the authority to prosecute to the attorney general. It’s also the attorney general’s responsibility, Lederman said, to stand up to a president who charts an unlawful course, “knowing that it might … lead to removal.”

Chris Lu, who managed Obama’s Cabinet in his first term, said the Obama White House followed its predecessors in adhering to strict rules on who could communicate with the Justice Department and on what topics.

“What Trump is suggesting is at odds with this longstanding precedent and dangerous to the principle of impartial justice,” Lu said.

EDITOR’S NOTE — A look at the veracity of claims by political figures.