WASHINGTON — A whistle blew, an impeachment inquiry swung into motion and the president at the center of it all rose defiantly to his own defense, not always in command of the facts.

A CIA officer, in a complaint filed under federal whistleblower protections that preserve anonymity, alleged President Donald Trump abused his office in pressing for a Ukrainian investigation of a Democratic rival, Joe Biden. That revelation persuaded Democrats to move ahead with an inquiry that could produce articles of impeachment. Trump has reacted with anger.

A look at Trump’s words this past week on impeachment, Ukraine and other subjects: 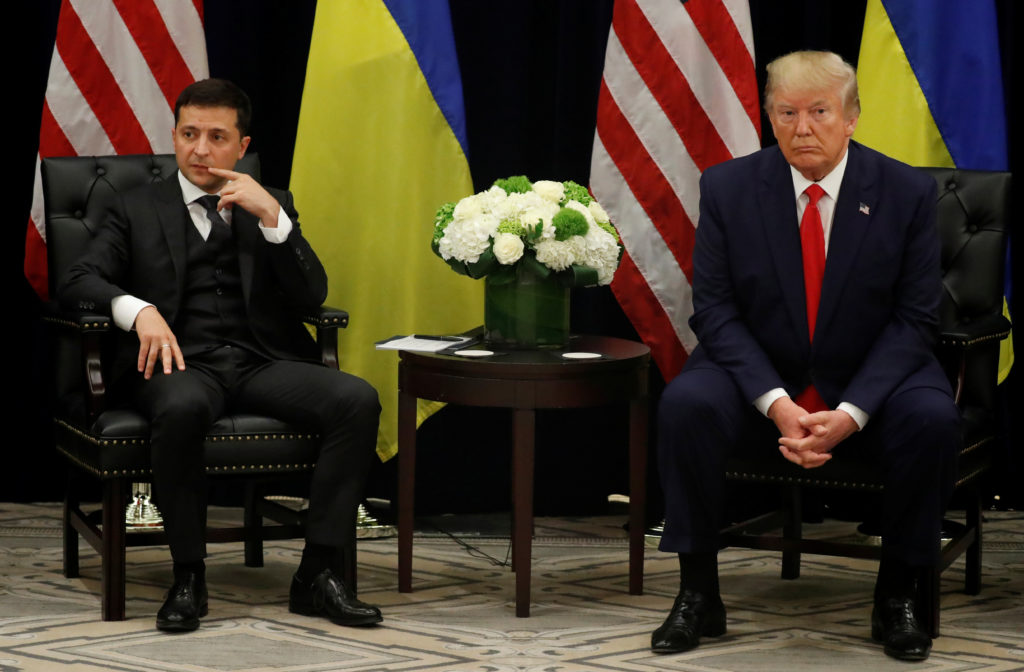 TRUMP, describing the July 25 phone call with his Ukrainian counterpart: “Another Fake News Story! See what was said on the very nice, no pressure, call.” — tweet Thursday.

TRUMP: “My call was perfect.” — remarks to reporters Thursday.

THE FACTS: It’s a big stretch for Trump to say he placed no pressure on President Volodymyr Zelenskiy in that phone call — a conversation marked by Trump’s blunt remark: “I would like for you to do us a favor,” according to a White House account of the call.

Trump repeatedly prodded Zelenskiy to help investigate Biden and son Hunter, as well as to look into a cybersecurity firm that investigated the 2016 hack of the Democratic National Committee and concluded it was carried out by Russia.

The call and the broader effort to win a foreign government’s help on a matter that could benefit Trump’s reelection are what sparked the impeachment inquiry.

The call followed a monthslong campaign by Trump’s personal lawyer, Rudy Giuliani, conducted on Trump’s behalf to get Ukrainians to scrutinize Hunter Biden’s business dealings in Ukraine when Joe Biden was vice president. It also followed Trump’s abrupt suspension of military aid for Ukraine that Congress had approved. The aid was recently released.

When Zelenskiy thanked Trump for past U.S. aid and suggested his country might need more, Trump switched the topic to the investigation he wanted Ukraine to do. He asked Zelenskiy to work with Attorney General William Barr and Giuliani on the matter.

As for the call being “perfect,” it was actually worrisome enough so that White House attorneys moved a rough transcript of it to a highly secure system where fewer officials would have access to it than is normally the case for conversations between Trump and world leaders.

The call and the broader effort to win a foreign government’s help on a matter that could benefit Trump’s reelection are what sparked the impeachment inquiry.

TRUMP, denouncing information from the whistleblower: “All second hand information that proved to be so inaccurate.” — tweet Friday.

THE FACTS: The whistleblower’s accusations have not been shown to be incorrect. Several key details have actually been corroborated. For example, the White House account of the July 25 phone call showed that the whistleblower had accurately summarized the conversation, as relayed by unidentified U.S. officials, in the complaint sent to the acting director of national intelligence.

TRUMP: “I want to see other countries helping Ukraine also, not just us. As usual the United States helps and nobody else is there.” — remarks to reporters Wednesday.

TRUMP: “I’d withhold again, and I’ll continue to withhold until such time as Europe and other nations contribute to Ukraine. Because they’re not doing it; it’s the United States. … Why is it only the United States putting up the money?” — remarks to reporters Tuesday.

THE FACTS: It isn’t only the U.S. putting up money. It’s false to say “nobody else is there.”

Since 2014, the EU and European financial institutions have mobilized more than $16 billion to help Ukraine’s economy, counter corruption, build institutions and strengthen its sovereignty against further incursions by Russia after its annexation of Crimea.

The U.S. is a heavy source of military assistance. The aid package held back by Trump, and recently released, amounted to nearly $400 million in such aid. But NATO also contributes a variety of military-assistance programs and trust funds for Ukraine. In most such cases, the programs are modest and NATO countries other than the U.S. take the lead.

TRUMP, in the July 25 call with Ukraine’s leader: “Germany does almost nothing for you. All they do is talk.” — according to White House account of the conversation, released Wednesday.

THE FACTS: Germany is the third largest bilateral donor to Ukraine, after the EU and the U.S. 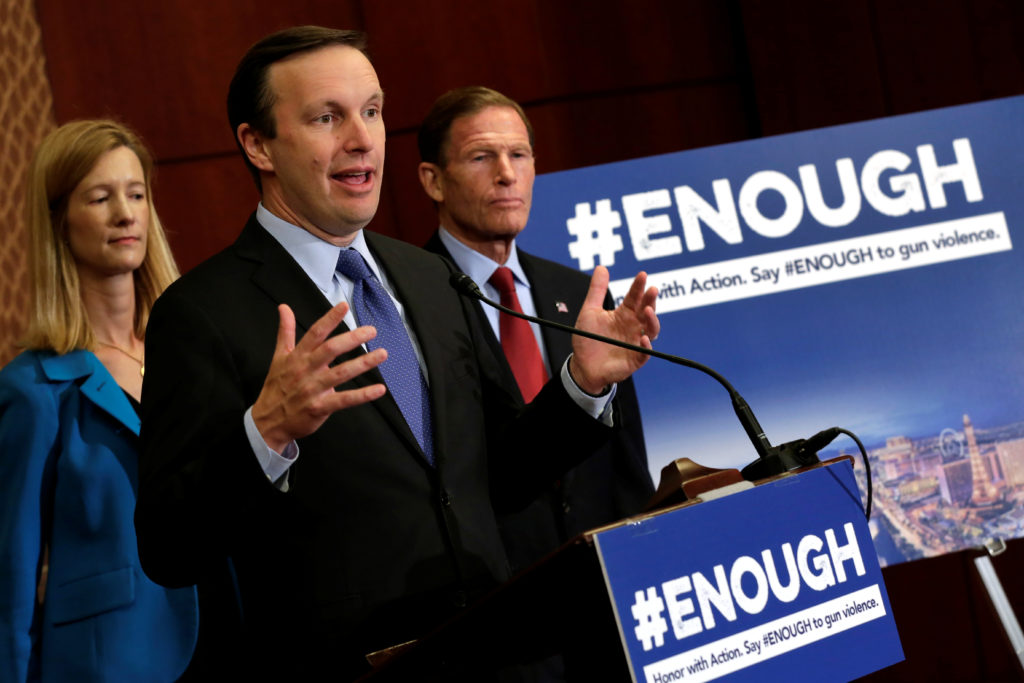 TRUMP, speaking of the Democratic senator from Connecticut: “Chris Murphy — who I’ve been dealing with on guns — you know, so nice. He’s always, ‘Oh, no, we want to work it out. We want to work it out.’ But they’re too busy wasting their time on the witch hunt.” — news conference Wednesday.

THE FACTS: Trump is the main holdup on gun control legislation as he mulls whether to endorse expanded background checks.

The Democratic-controlled House passed a bill in February that would require background checks on all gun sales, including those between strangers who meet online or at gun shows. But Sen. Mitch McConnell, R-Ky., said it’s not clear the Senate would be able to pass the legislation or that Trump would sign it into law. Earlier this month, McConnell stressed that Congress would remain “in a holding pattern” on gun control as lawmakers await proposals from the White House.

A proposal being floated by Barr on Capitol Hill would require background checks on all commercial gun sales, including at gun shows. But Trump told reporters this month the plan was one of many ideas under consideration and he would go “very slowly.”

VICE PRESIDENT MIKE PENCE: “We have before the Congress what will be the largest trade deal in American history. … It’s time for Congress to pass the U.S.-Mexico-Canada Agreement and pass it this year.” — remarks Thursday in Indianapolis.

THE FACTS: It’s not the largest trade deal ever made.

It covers the same three countries as the North American Free Trade Agreement, which the Trump administration is seeking to replace. In contrast, the Uruguay Round of trade negotiations concluded in 1994 created the World Trade Organization and was signed by 123 countries. The Federal Reserve Bank of Boston found the following year that the WTO’s initial membership accounted for more than 90 percent of global economic output.

THE FACTS: First, he’s not actually charged with anything. He’s saying the market went down Tuesday when the impeachment drive was announced and up after the White House memo on his phone call with Ukraine’s president came out. That’s roughly right, but it’s wrong to tie the market fluctuations solely — or even primarily — to the impeachment episode.

The market cares even more about the economy, and currently the biggest wild card for the U.S. economy is how much Trump’s trade war with China could curtail growth. Since it began last year, the stock market has fallen with each escalation of tensions and risen when the two sides appeared close to resolving the dispute.

The 142-point drop in the Dow Jones Industrial Average on Tuesday was partly due to the impeachment developments but was also tied to Trump taking a hard line on China in a speech to the United Nations, which seemed to dim the prospects that coming talks would resolve the trade standoff. While the market did move higher Wednesday after the release of the memo, the Commerce Department released some solid numbers on the housing market around the same time.

Moreover, just after the comment on the stock exchange, Trump told reporters a deal with China “could happen sooner than you think,” and the Dow quickly doubled its gain.

The economic-political dynamic was evident in the impeachment inquiries of Presidents Richard Nixon and Bill Clinton. After the initial inquiry of Nixon in October 1973, the S&P 500 index fell 33% the next year. But the S&P 500 gained 39% after the Clinton impeachment inquiry started in October 1998. The difference: The economy was headed toward a recession in the mid-1970s, while the economy was growing strongly in the late 1990s. For Trump, the U.S. economy slowed to growth of about 2% in the second quarter from 3% in the first quarter and current estimates are for 2% growth in the third quarter.

TRUMP: “Our country is the strongest it’s ever been economically.” — news conference Wednesday.

THE FACTS: It isn’t.

In the late 1990s, growth topped 4% for four straight years, a level it has not reached on an annual basis under Trump. Growth reached 7.2% in 1984. The economy grew 2.9% in 2018 — the same pace it reached in 2015 under President Barack Obama — and hasn’t hit historically high growth rates.

The unemployment rate is near a 50-year low of 3.7%, but the proportion of Americans with a job was higher in the 1990s. Wages were rising at a faster pace back then, too. More Americans are now out of the workforce, taking care of children or relatives, or going to school, while others became discouraged about their job prospects and stopped looking. The government doesn’t count people as unemployed unless they are actively searching for jobs.

TRUMP: “In America, the result was 4.2 million lost manufacturing jobs … the United States is now taking that decisive action to end this grave economic injustice.” — address Tuesday to the U.N. General Assembly.

WHITE HOUSE: “The president is getting rid of the disastrous North American Free Trade Agreement and replacing it with a better deal, the United States-Mexico-Canada Agreement. Our country has lost 4 million manufacturing jobs since NAFTA went into effect.” — news release Tuesday.

THE FACTS: The loss of factory jobs is not all due to NAFTA.

Trump is correct that the United States has lost nearly 4 million factory jobs since that pact took effect in January 1994. But most economists attribute the losses to other factors — the recessions of 2001 and 2007-2009, automation that lets machines replace workers and low-cost competition from China.

Trump’s proposed NAFTA replacement is hardly expected to create a jobs boom. The independent International Trade Commission estimates that the new deal would create 176,000 jobs over six years, a rounding error in a country with 152 million nonfarm jobs.

TRUMP, recalling his days as the owner of the Miss Universe pageant: “It’s a great thing. And we had a winner from Ukraine.” — remarks Wednesday before a meeting with Zelenskiy.

THE FACTS: A Ukrainian woman has never won the Miss Universe title. Several made the top 10 during Trump’s tenure at the pageant, which he bought in 1996 and sold in 2015. But none took the prize in the pageant’s history, which dates to 1952. Ukrainian Olesia Stefanko was first runner-up in 2011.

Left: FILE PHOTO: Speaker of the House Nancy Pelosi (D-CA) reacts alongside Vice President Mike Pence as he applauds U.S. President Donald Trump during his second State of the Union address to a joint session of the U.S. Congress in the House Chamber of the U.S. Capitol on Capitol Hill in Washington, U.S. February 5, 2019. Photo by Leah Millis/Reuters.