WASHINGTON — President Donald Trump spoke this past week as if he’s unaware that drug prices have gone up and tariffs came before him.

His boast that the U.S. never collected a dime on goods from China until he imposed them marked a series of statements misrepresenting how trade works as the two countries escalated their dispute with new and retaliatory taxes on each other’s products.

Meantime, Russian President Vladimir Putin declared inaccurately that no traces of collusion between his country and Trump’s 2016 campaign were found in the “exotic” special counsel investigation by Robert Mueller.

A look at some recent rhetoric: 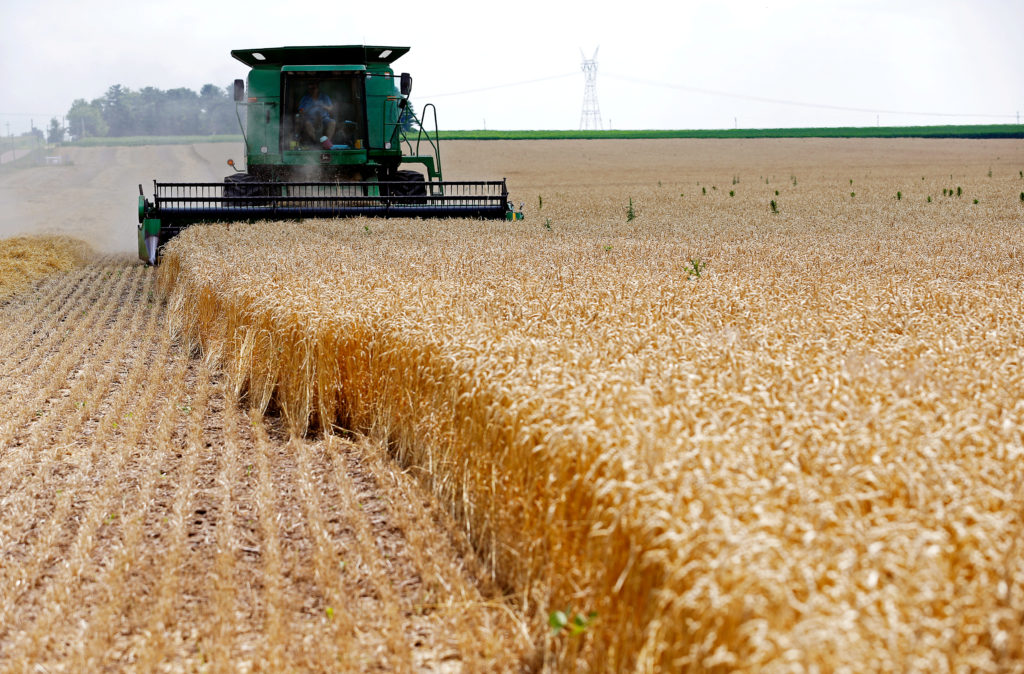 FILE PHOTO: A combine drives over stalks of soft red winter wheat during the harvest on a farm in Dixon, Illinois, July 16, 2013. Photo by Jim Young/Reuters

TRUMP: “We’ve been losing, for many years, anywhere from $300 billion to $500 billion a year with China and trade with China. We can’t let that happen.” — remarks Tuesday at the White House.

TRUMP: “We lost $180 billion with the European Union.” — remarks to National Association of Realtors on Friday.

THE FACTS: This is not how almost any economist would describe what is happening.

The United States does have a huge trade deficit with China, totaling $378.7 billion last year, as well as a $109 billion trade deficit with the EU. That means China and the EU exported far more to the United States than vice versa. But in return, U.S. businesses and consumers received goods and services with that money. Economists compare Trump’s take on trade deficits to a shopper going to a store and complaining they “lost” money with what they bought.

Most trade experts see trade deficits or surpluses between two specific countries as economically meaningless. China’s deficit with the United States is large in part because many goods, particularly electronics, that used to be made in different countries, typically in Asia, are now sent to China for final assembly, even though many key parts are still manufactured in countries such as Japan, South Korea and Taiwan.

That has lowered the U.S. trade deficit with those countries over the years while increasing the gap with China. 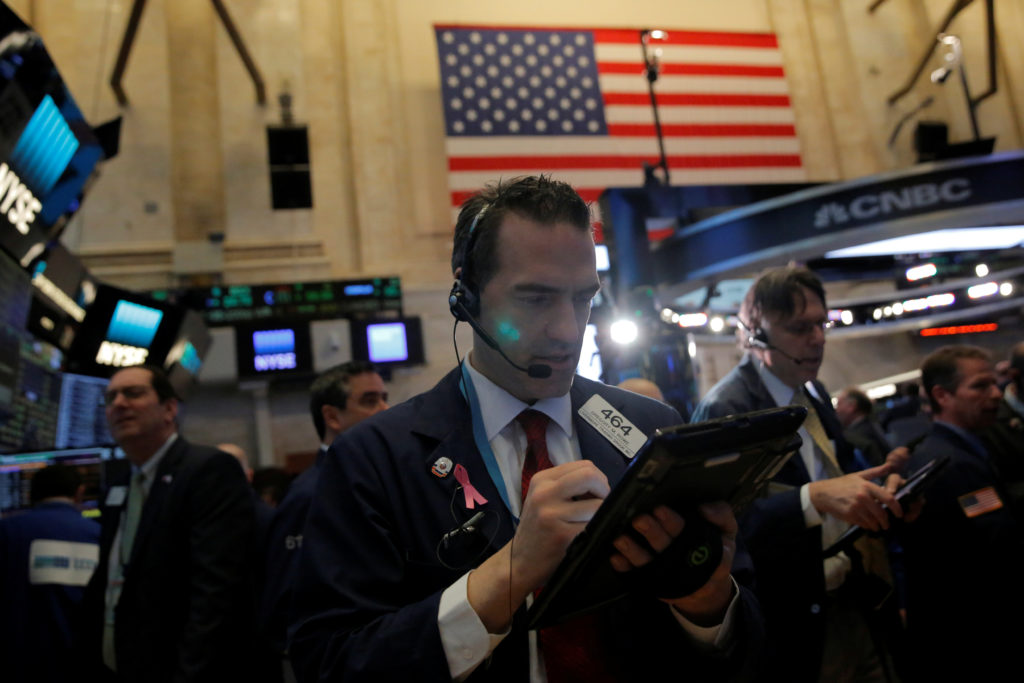 Traders work on the trading floor at the opening of the markets at the New York Stock Exchange (NYSE) in Manhattan, New York City, U.S. February 27, 2017. Photo by Andrew Kelly/ Reuters

TRUMP: “Our economy is fantastic; (China’s) is not so good. We’ve gone up trillions and trillions of dollars since the election; they’ve gone way down since my election.” — remarks Tuesday.

U.S. gross domestic product — the broadest measure of the country’s growth — has increased by just over $1 trillion, to $18.9 trillion, in the past two years. Those figures are adjusted for inflation. China has seen its rate of economic growth tick down slightly, from 6.7% in 2016 to 6.6% last year, according to the International Monetary Fund. That is more than twice the U.S. growth rate in 2018 of 2.9%, although mature economies such as America’s typically grow more slowly than developing countries such as China. 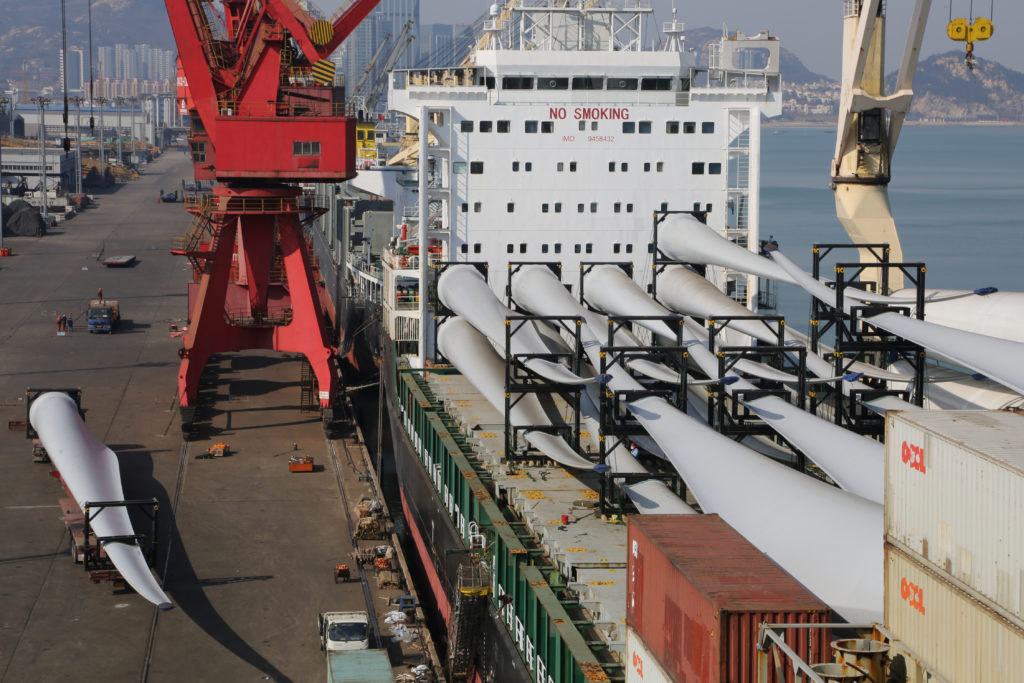 Wind turbine equipments for export are seen on a cargo vessel at a port in Lianyungang, Jiangsu province, China on January 27, 2019. Wind turbine parts are included in the latest list that could soon be tariffed. Photo via Reuters

THE FACTS: He’s wrong. The notion that the U.S. suddenly has revenue coming in from tariffs, thanks to his trade dispute, defies history that goes back to the founding of the republic. President George Washington signed the Tariff Act into law in 1789 — the first major act of Congress — and duties from imports were a leading source of revenue for the government before the advent of the modern tax system early in the 20th century. Tariffs on goods specifically from China are not remotely new, either. They are simply higher in some cases than they were before.

Tariffs are a decidedly modest portion of revenue in modern times and Trump has not changed that with the escalation of his trade fight with China. Customs and duties generated $41.3 billion in revenues last year, up from $34.6 billion in 2017 (far more than 10 cents). That $6.7 billion increase occurred in part because of the president’s tariffs. But it amounted to just 0.16% of federal spending. 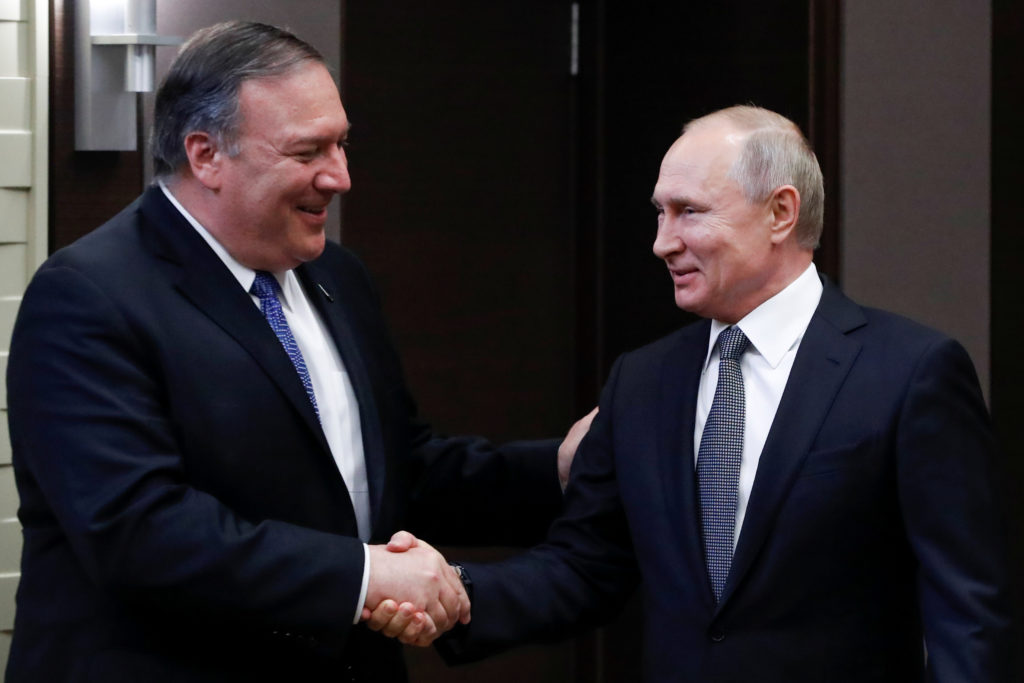 Russian President Vladimir Putin and U.S. Secretary of State Mike Pompeo shake hands prior to their talks in the Black Sea resort city of Sochi, Russia, on May 14, 2019. Photo by Pavel Golovkin/Pool via Reuters

PUTIN: “However exotic the work of special counsel Mueller was, I have to say that on the whole, he has had a very objective investigation, and he confirmed that there were no traces whatsoever of collusion between Russia and the incumbent administration, which we said was absolutely fake.” — remarks Tuesday before a private meeting with Secretary of State Mike Pompeo in Sochi, Russia.

THE FACTS: Putin is wrong about the Mueller report in regards to its findings of “collusion.”

The Mueller report and other scrutiny revealed a multitude of meetings between Trump associates and Russians. Among them: Donald Trump Jr.’s meeting with a Russian lawyer who had promised dirt on Hillary Clinton.

On collusion, Mueller said he did not assess whether that occurred because it is not a legal term.

He looked into a potential criminal conspiracy between Russia and the Trump campaign and said the investigation did not collect sufficient evidence to establish criminal charges on that front.

Mueller noted some Trump campaign officials had declined to testify under the Fifth Amendment or had provided false or incomplete testimony, making it difficult to get a complete picture of what happened during the 2016 campaign. The special counsel wrote that he “cannot rule out the possibility” that unavailable information could have cast a different light on the investigation’s findings. 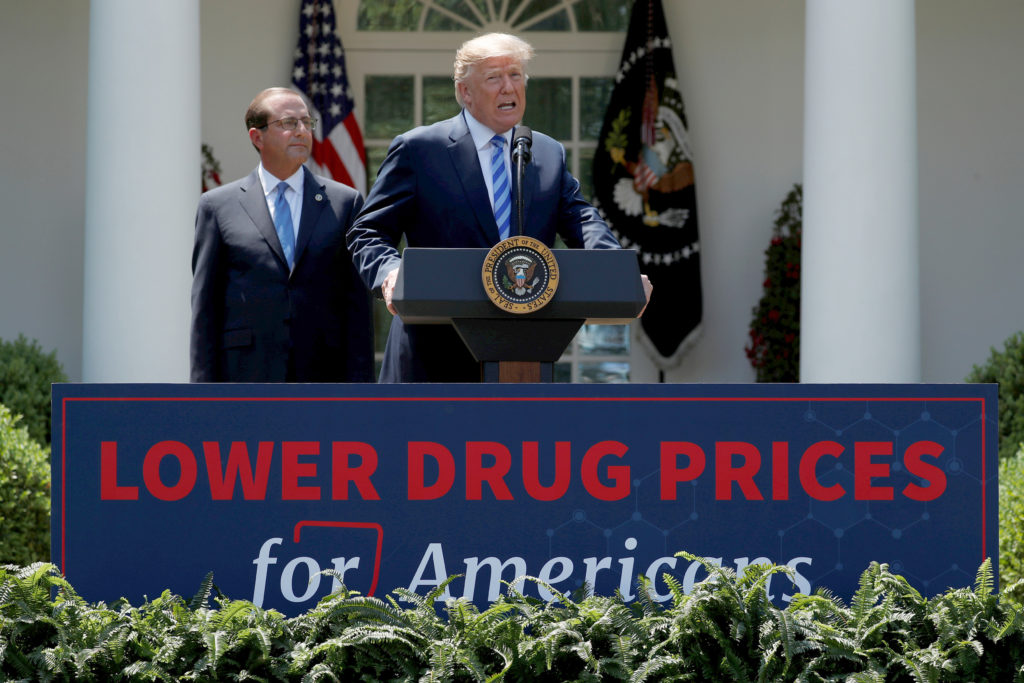 President Donald Trump and Secretary of Health and Human Services Alex Azar deliver remarks about prescription drug prices at the White House on May 11, 2018. Photo by Jonathan Ernst/Reuters

THE FACTS: That’s an outdated boast. Trump appeared to be referring to recent decreases in the Labor Department’s Consumer Price Index for prescription drugs. But the index was updated Friday, before Trump’s latest claim, and it showed an increase of 0.3% in April for prescription drug prices when compared with the same month last year.

The index tracks a set of medications, both brand drugs and generics.

Other independent studies point to increasing prices for brand name drugs as well and more overall spending on medications.

An analysis of brand-name drug prices by The Associated Press showed 2,712 price increases in the first half of January, compared with 3,327 increases during the same period last year. However, the size of this year’s increases was not as pronounced.

Both this year and last, the number of price cuts was minuscule. The information for the analysis was provided by the health data firm Elsevier.

Economist Paul Hughes-Cromwick of Altarum, said he expects drug prices will continue to creep up.

“I would be quite surprised if by July the annual rate doesn’t return to a more normal 2%-4% growth,” said Hughes-Cromwick. 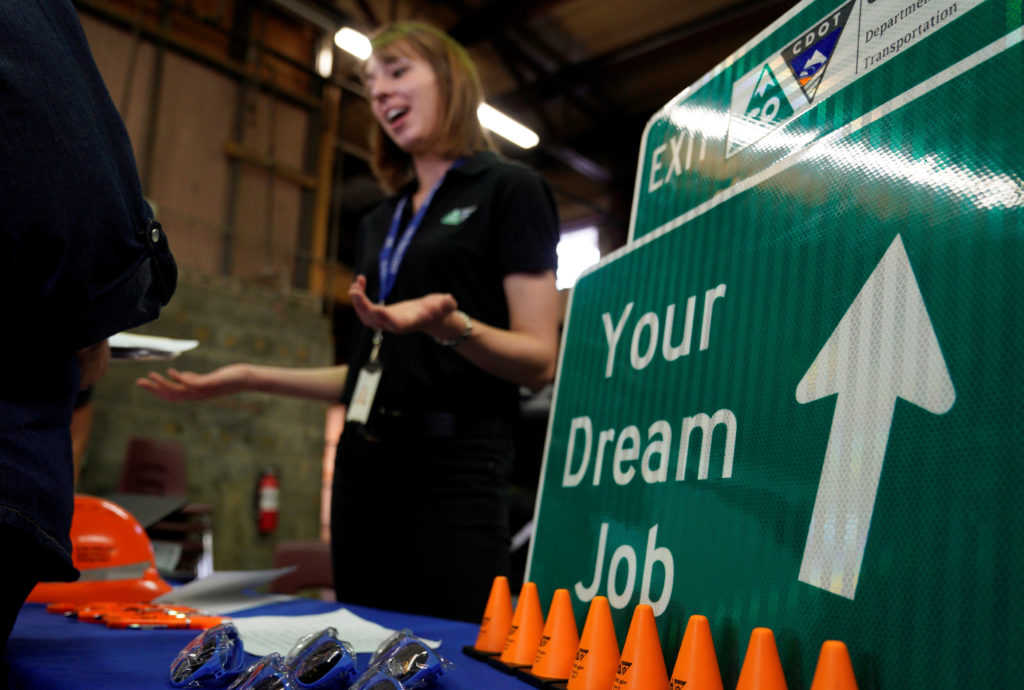 TRUMP: “We have the most people working today than at any time in the history of our country.” — remarks to real estate group Friday.

THE FACTS: True but not surprising. The record workforce is driven by population growth.

A more relevant measure is the proportion of Americans with jobs, and that is still far below record highs.

According to Labor Department data, 60.6 percent of people in the United States 16 years and older were working in April. That’s below the all-time high of 64.7 percent in April 2000, though higher than the 59.9 percent when Trump was inaugurated in January 2017. 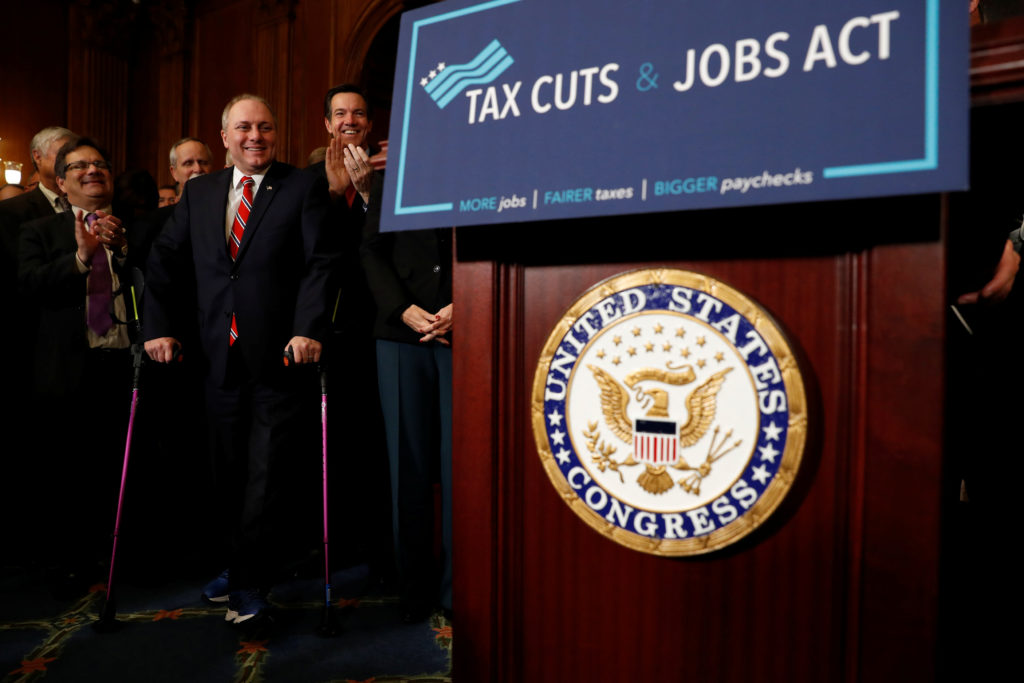 TRUMP: “We have the biggest tax cut bill in the history of our country.” — remarks to real estate group Friday.

THE FACTS: His tax cuts are nowhere close to the biggest in U.S. history.

It’s a $1.5 trillion tax cut over 10 years. As a share of the total economy, a tax cut of that size ranks 12th, according to the Committee for a Responsible Federal Budget. President Ronald Reagan’s 1981 cut is the biggest followed by the 1945 rollback of taxes that financed World War II.