WASHINGTON (AP) — President Donald Trump spread shoddy information about Syria, the economy and matters at the heart of the impeachment inquiry against him in a week of caustic rhetoric.

TRUMP, on Hunter Biden, whose father is former Vice President Joe Biden, a Trump political rival: “Guy walks in, no experience, no nothing, walks out with $1.5 billion. Gee, flies in on Air Force 2 with his father, the vice president. … So China gives his son $1.5 billion. How would you like to have Joe Biden take over negotiations right now with China? I don’t think so.” — Minneapolis rally Thursday.

THE FACTS: There’s no evidence Hunter Biden pocketed $1.5 billion from China. More generally, accusations of criminal wrongdoing by father or son are unsubstantiated.

In 2014, an investment fund started by Hunter Biden and other investors joined with foreign and Chinese private equity firms in an effort to raise $1.5 billion to invest outside China. That’s far from giving Hunter Biden such a sum, as Trump describes it.

Hunter Biden’s lawyer, George Mesires, told the PolitiFact website that his client was an unpaid director of the fund at the time and it ended up raising less than one-third of its target.

Trump’s attempt to press Ukraine to investigate the Bidens is at the center of the impeachment inquiry into the president’s activities in office; Trump also has called for China to investigate them. Joe Biden is contending for the 2020 Democratic nomination to run against Trump.

TRUMP, on House Speaker Nancy Pelosi, D-Calif., and Democratic Rep. Adam Schiff of California, chairman of the House Intelligence Committee: “Nancy Pelosi knew of all of the many Shifty Adam Schiff lies and massive frauds perpetrated upon Congress and the American people, in the form of a fraudulent speech …This makes Nervous Nancy every bit as guilty as Liddle’ Adam Schiff for High Crimes and Misdemeanors … I guess that means that they, along with all of those that evilly ‘Colluded’ with them, must all be immediately Impeached!” — tweet Sunday.

THE FACTS: There’s no danger that either Schiff or Pelosi, who last month launched impeachment proceedings against Trump, will be impeached themselves. That’s because House members cannot be impeached under the Constitution.

The House does have the power to expel one of its members by a two-thirds vote, but there are little grounds for it based on what Trump alleges. 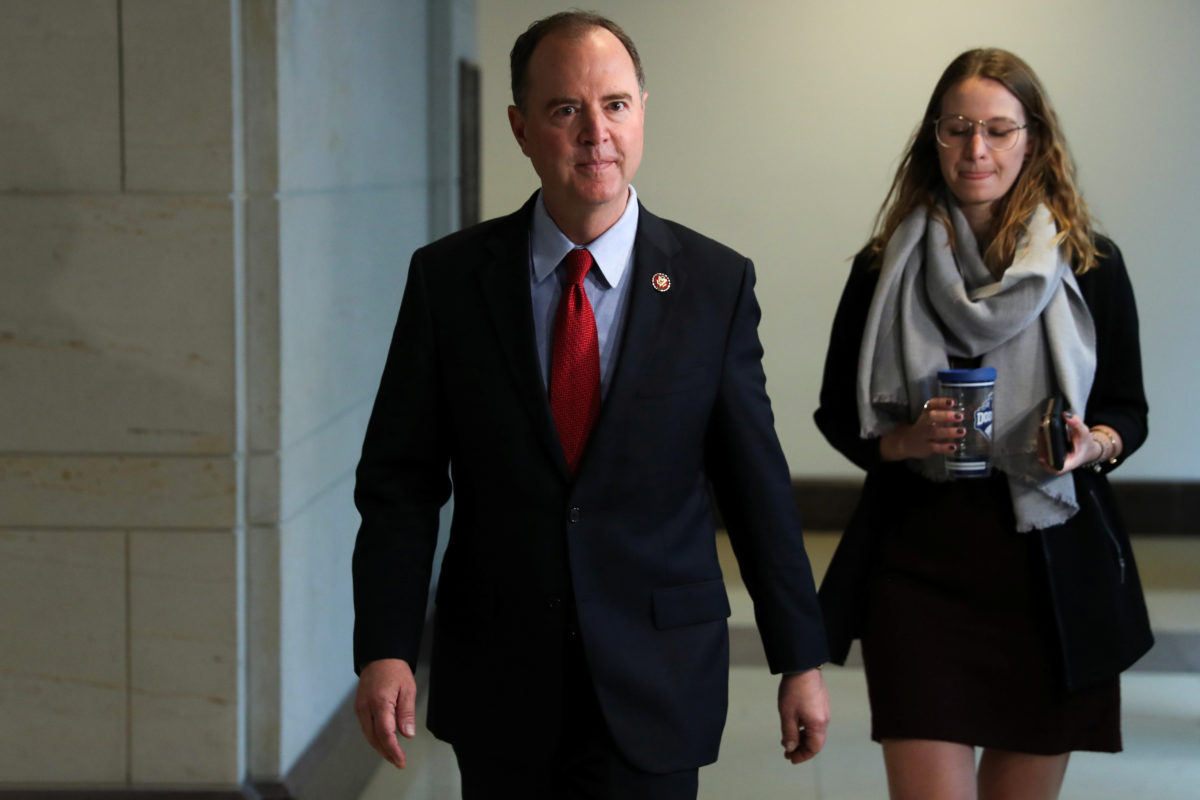 Trump’s reference to a “fraudulent speech” comes from remarks Schiff made last month at a committee hearing, when he mocked the president’s pleas in his July call to Ukrainian President Volodymyr Zelenskiy.

Schiff said his remarks were a parody, reflecting the “essence” of what he believed Trump was conveying to Zelenskiy, “shorn of its rambling character.”

Trump routinely mocks critics, as he did in this tweet, and invents dialogue that he attributes to them.

The House has expelled only five of its own, based on charges of members supporting the Confederacy during the Civil War or bribery and corruption.

TRUMP, on removing U.S. troops from Syria: “I was elected on getting out of these ridiculous endless wars, where our great Military functions as a policing operation to the benefit of people who don’t even like the USA. The two most unhappy countries at this move are Russia & China, because they love seeing us bogged…down.” — tweets Monday.

THE FACTS: That’s a dubious reading of Russia, in particular.

Both Russia and Iran stand to gain from a U.S. troop withdrawal and will probably bide their time until they can move in and retake the area. With their help, Syrian President Bashar Assad has recaptured most of the Syrian territory except for the north and east.

Iran and Russia are both key allies of Assad’s government with troops on the ground in Syria. While they may publicly oppose a Turkish incursion into Syria , they probably don’t mind an operation that diminishes the U.S.-allied Kurdish forces.

Some of Turkey’s incursions into Syria appeared to have been coordinated with Russia and Iran.

TRUMP: “When I arrived in Washington, ISIS was running rampant in the area. We quickly defeated 100% of the ISIS Caliphate.” — tweet Monday.

THE FACTS: His claim of a 100% defeat is misleading because the Islamic State group still poses a threat.

IS was defeated in Iraq in 2017, then lost the last of its land holdings in Syria in March, marking the end of the extremists’ self-declared caliphate.

Still, extremist sleeper cells have continued to launch attacks in Iraq and Syria and are believed to be responsible for targeted killings against local officials and members of the Syrian Democratic Forces.

IS controlled large swathes of northern and eastern Syria, where they declared a caliphate in 2014 along with large parts of neighboring Iraq.

U.N. experts warned in August that IS leaders are aiming to consolidate and create conditions for an “eventual resurgence in its Iraqi and Syrian heartlands.”

TRUMP: “So many people conveniently forget that Turkey is a big trading partner of the United States, in fact they make the structural steel frame for our F-35 Fighter Jet.” — tweet Tuesday.

THE FACTS: Actually, Turkey won’t be providing the steel for U.S. F-35 fighter jets much longer. 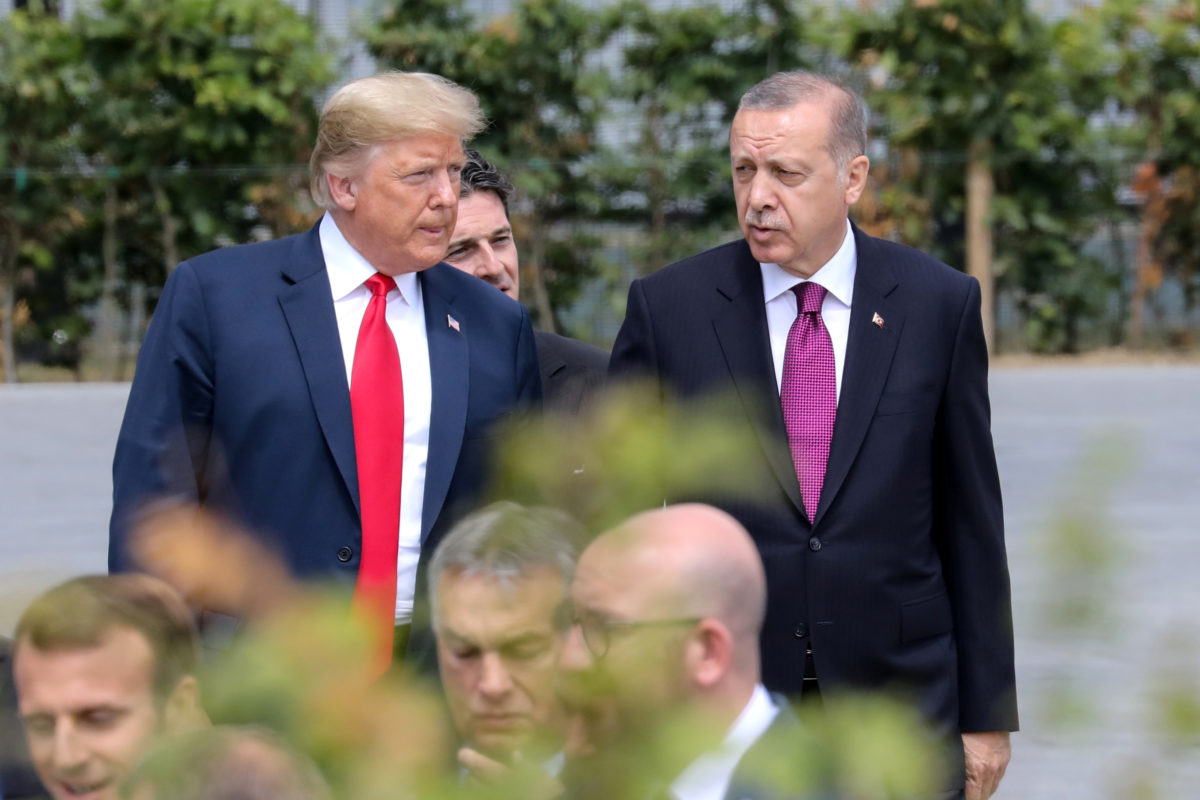 The Trump administration removed Turkey from the F-35 program in July because the Turks refused to cancel the purchase of a Russian S-400 air defense system that is incompatible with NATO forces. At the time, the White House said the S-400 would compromise the F-35 program and aid Russian intelligence.

As part of that process, the U.S. said it will stop using any Turkish supplies and parts by March.

TRUMP: “We quickly defeated 100% of the ISIS Caliphate, …including capturing thousands of ISIS fighters, mostly from Europe. But Europe did not want them back, they said you keep them USA!” — tweet Monday.

TRUMP: “Most of them came from Europe.” — Minneapolis rally.

THE FACTS: Not true. The foreign fighters captured and being held by the U.S.-allied Kurds are not mostly from Europe, which Trump has argued could easily reclaim them.

Of the more than 12,000 IS fighters in custody in Kurdish areas, only 2,500 are from outside the region of the conflict, some from Europe, some from other parts of the world. But most of captured fighters — about 10,000 — are natives of Syria or Iraq.

Trump has said it will now be up to countries in the region to decide what to do with captured fighters.

TRUMP, criticizing Barack Obama’s struggle to win confirmation of federal judges as president, contends “they were unable to fill 142 important Federal Judgeships (a record by far), handing them all to me to choose.” — tweet Wednesday.

THE FACTS: First, his number is false. So is his insinuation that Obama couldn’t fill judicial vacancies due to complacency.

It’s true that Trump has a stronger record than Obama so far in picking federal judges. But it was due to unprecedented lack of action by the Republican-controlled Senate on Democrat Obama’s judicial nominees in his last two years in office. That left Trump more vacancies to fill. 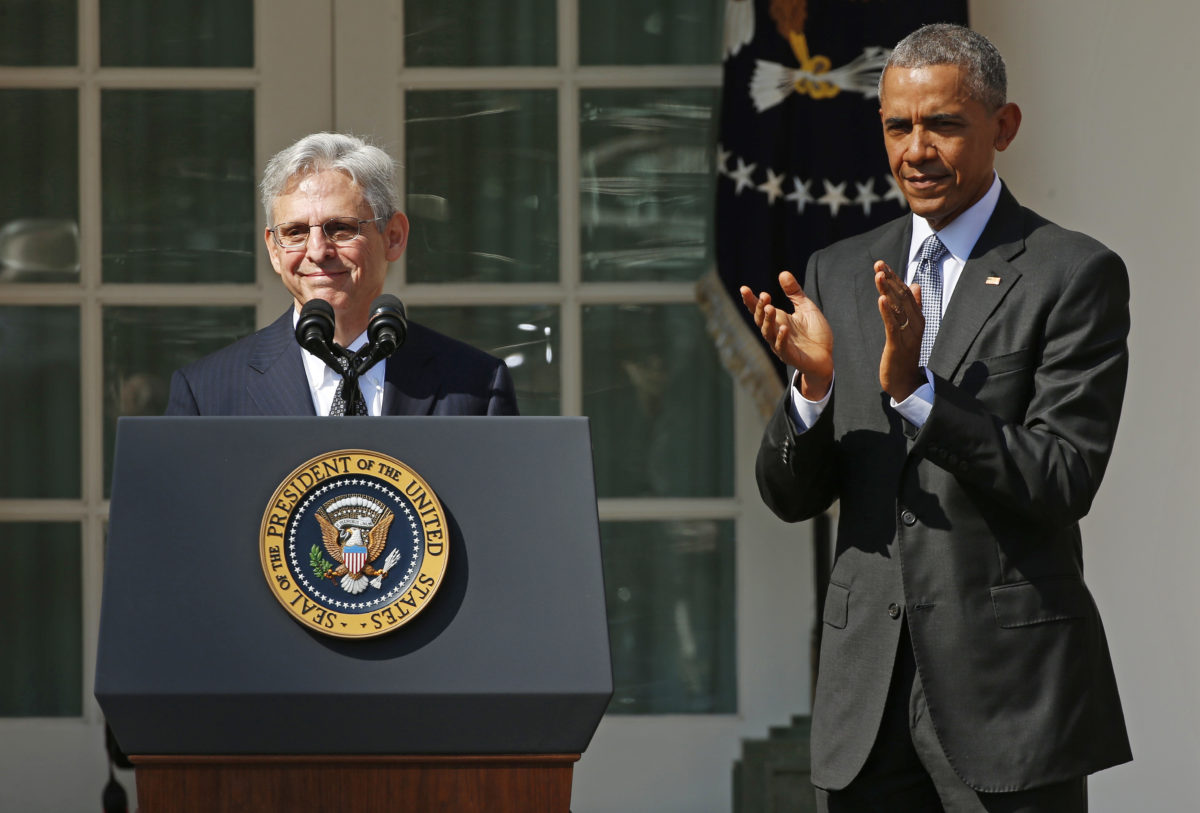 Judge Merrick Garland speaks as President Barack Obama applauds after Obama announced him as his nominee to the U.S. Supreme Court, in the Rose Garden of the White House in Washington, D.C. on March 16. Photo by Kevin Lamarque/Reuters

Of the 71 people whom Obama nominated to the district courts and courts of appeals in 2015 and 2016, only 20 were voted on and confirmed, said Russell Wheeler, an expert on judicial nominees at the Brookings Institution. Trump entered office in January 2017 with under 110 vacancies on the federal bench — not 142 as he asserts — about double the number Obama had in 2009.

Trump has since been aided by Senate Majority Leader Mitch McConnell, R-Ky., who has pushed through Trump’s nominations of appeals court judges in particular.

TRUMP: “If our opponent had won that election, you know what would have happened? Right now, China would be the No. 1 economy anywhere in the world. And right now, I can tell you, they’re not even close.” — Minneapolis rally.

TRUMP: “So I think China might have caught us if my opponent had gotten in. By now, they would have caught us. And now it’s going to be a long time before they catch us, if they ever catch us. I don’t think anybody is going to catch us.” — remarks Monday on trade .

THE FACTS: No matter who got elected in 2016 — Trump or Democrat Hillary Clinton — there is no way China’s economy would have caught up with America’s by now.

Even if the U.S. economy hadn’t grown at all since 2016, China’s gross domestic product — the broadest measure of economic output — would have had to have surged a fantastical 79% in three years to have pulled even with America’s. That comes to growth of more than 21% a year — something even China’s super-charged economy has never approached.

Moreover, despite Trump’s suggestion that China can’t ever catch up, the Chinese economy continues to slowly narrow the gap because every year it grows much faster than America’s. In 2019, for example, the International Monetary Fund expects Chinese GDP to increase 6.2%, more than double the 2.6% growth it expects for the United States.

THE FACTS: This comparison is misleading.

McDaniel didn’t provide her data source. But her statement obscures the track records of both presidents and the economic conditions that their administrations inherited.

For the first two full years of Trump’s presidency, the Census Bureau shows that median household income has been growing by a monthly average of $58, to $63,179 in 2018. That’s almost one-third of what claimed in McDaniel’s tweet. 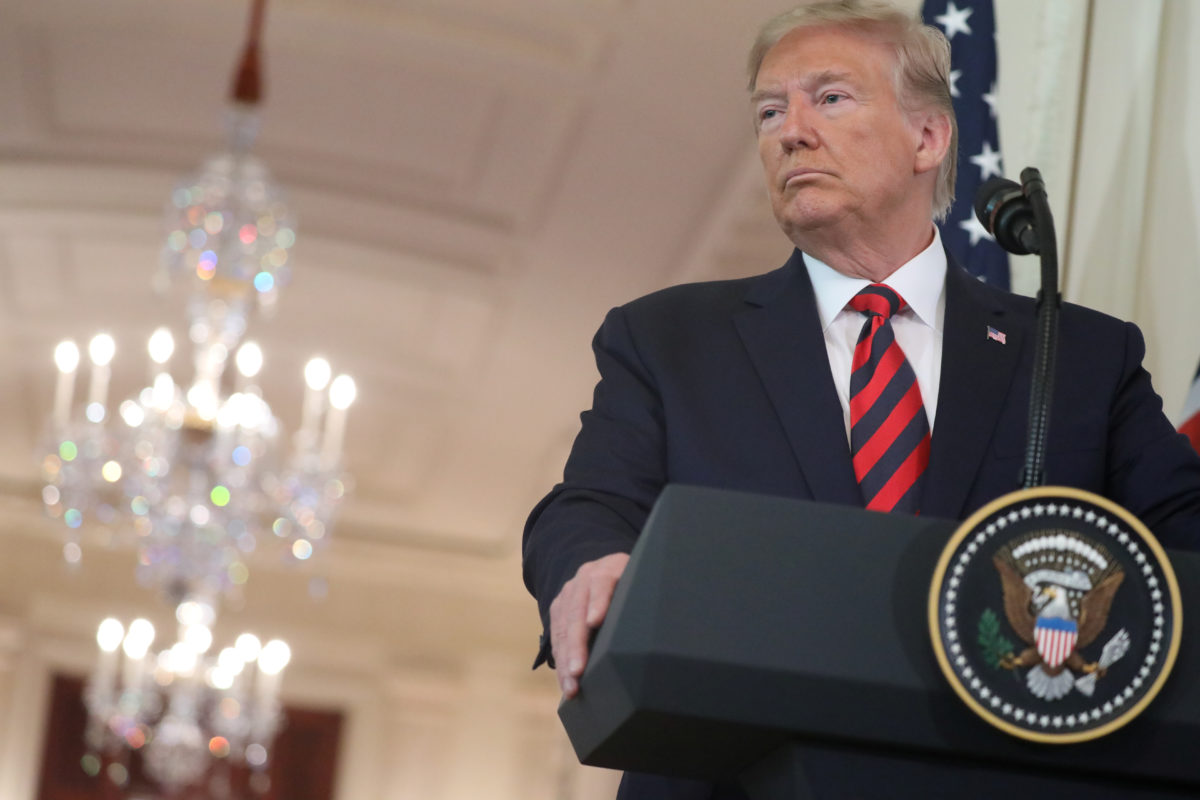 Under Obama, incomes rose at a monthly average of only $31. But that average includes Obama’s first term, when the economy was dealing with the ravages from the Great Recession that began before he became president. Trump took office at a moment when the economy was relatively healthy.

Obama’s track record improved sharply after 2012, as the recovery took hold. Median incomes during that period rose at a monthly average of $122. That is more than double the income growth during Trump’s first two years.

TRUMP: “As you know, in addition to what we’re talking about today, they’re building — Japan — many car plants in the United States, which they weren’t doing for a long time. And they’re building in Michigan, Ohio, lots of different states. And we just appreciate it very much. Been a tremendous investment.” — remarks Monday on trade.

THE FACTS: Not true. Japanese automakers are not building “many” car plants in the U.S. No Japanese automakers are building assembly plants in Michigan, and Honda is making only a small investment at an existing facility in Anna, Ohio, near Dayton. Honda has announced it will build a hybrid SUV at a factory in Greensburg, Indiana, but that investment is $4.2 million and will add 34 new jobs.

The only major assembly plant being built now by Japanese automakers in the U.S. is the Toyota-Mazda factory in Alabama, which is expected to employ 4,000 people and will start producing vehicles in 2021.

Normally, parts-making companies set up operations in or near the main assembly plant, and that’s happening in Huntsville. Six companies are investing about $491 million in the area, creating an expected 1,765 jobs, according to Toyota.

Trump is also wrong to suggest recent construction from Japanese car companies in the U.S. is somehow new. Japanese automakers have been building in the U.S. since the 1970s and have expanded manufacturing over the years. The companies have announced millions in investments to retool existing plants to make new models.