AP FACT CHECK: Trump’s sunny side up take on coronavirus

WASHINGTON — As the stock market convulses, airline schedules buckle and businesses worry their overseas supply lines will snap, President Donald Trump is looking on the sunny side of an economy clouded by the coronavirus.

For several weeks he’s played down the consequences of the public health emergency even as his agencies scramble to manage it. Now he’s suggesting that a robust jobs report might be explained in part by the prospect that Americans are hunkering down and focusing more of their spending in their own country. There’s no evidence that the virus has juiced jobs.

Trump’s plentiful and sometimes inaccurate comments on the outbreak this past week prompted the chairman of the Senate Health, Education, Labor and Pensions Committee, Sen. Lamar Alexander, R-Tenn., to suggest that Trump and Vice President Mike Pence stand back and “let the experts do the talking.” Trump paid that advice no heed.

A sampling of the past week’s rhetoric on the virus and other matters and how it compares with the facts:

TRUMP: “We’re going to have Americans staying home instead of going and spending the money in other countries. And maybe that’s one of the reasons the job numbers are so good.” — remarks to the press Friday.

THE FACTS: That is not one of the reasons the job numbers are so good.

The government’s report Friday showing employers added a healthy 273,000 jobs last month was compiled before the coronavirus had spread through multiple states.

Even so, the report showed employment at hotels was flat. Restaurant hiring jumped by more than 50,000, but most economists attributed that to relatively warm weather. Now, with many businesses restricting their employees’ travel, airlines are already getting hit: United Airlines said Wednesday it has instituted a hiring freeze.

Trump is probably correct that fewer Americans will go abroad and spend money while the outbreak is active. The flip side is that fewer foreigners may come to the U.S. and spend their money here.

WHITE HOUSE: “The President is no longer traveling to Atlanta today. The CDC has been proactive and prepared since the very beginning and the President does not want to interfere with the CDC’s mission to protect the health and welfare of their people and the agency.” — statement Friday about Trump’s planned visit to the Centers for Disease Control and Prevention.

THE FACTS: Actually, the White House rationale for canceling the trip was contradicted a short time later by Trump, who said he postponed because a CDC employee in Atlanta was thought to have contracted the infectious disease and “because of the one person, they didn’t want me going.” It was not about staying out of the way of CDC employees,

He said it turned out that the person was not infected. He visited the CDC after all.

TRUMP: “A lot of people will have this, and it’s very mild. They will get better very rapidly. They don’t even see a doctor … So, if we have thousands or hundreds of thousands of people that get better just by, you know, sitting around and even going to work — some of them go to work, but they get better.” – Fox News interview Wednesday.

TRUMP: “I NEVER said people that are feeling sick should go to work. This is just more Fake News.” — tweet Thursday.

THE FACTS: He seems to be suggesting that people with COVID-19 can go to work if they have minor symptoms, contradicting the guidance of his federal health officials. Regardless of how sick people may or may not feel, people are advised to stay home.

The CDC states that people with confirmed or suspected COVID-19 who do not need hospitalization should restrict their activities and “stay home except to get medical care.”

“Do not go to work, school or public areas,” it states.

TRUMP, on developing tests for coronavirus in patients: “The Obama administration made a decision on testing that turned out to be very detrimental to what we’re doing. And we undid that decision a few days ago so that the testing can take place in a much more accurate and rapid fashion.” — Wednesday at the White House.

VICE PRESIDENT MIKE PENCE: “The last administration asserted FDA jurisdiction over testing and the development of tests like this. … The president changed that on Saturday so that now, as I spoke to several governors this morning, the states now have the ability to actually conduct the coronavirus test in state labs, university laboratories.” — Wednesday at the White House.

TRUMP: “And now we have tremendous flexibility. Many, many more sites. Many, many more people. And you couldn’t have had that under the Obama rule, and we ended that rule very quickly.” — Wednesday.

THE FACTS: They’re trying to blame Barack Obama for something his administration didn’t do.

It’s not true that an Obama-era rule limited laboratories run by companies, universities and hospitals from developing and running tests for the coronavirus during an emergency. No such regulation existed.

The Trump administration’s action last Saturday only undid a policy that its own Food and Drug Administration put in place. The new action lets labs develop and use coronavirus diagnostic tests before the agency reviews them. Previously, the FDA had only authorized use of a government test developed by the CDC.

FDA guidance drafted during the Obama administration called for tighter regulation of so-called laboratory-developed tests, a market traditionally not overseen by the agency. But that guidance was not brought into effect. Even if it had been, it would not have applied to public health emergencies such as the coronavirus.

TRUMP: The U.S. may have a vaccine “relatively soon” and “something that makes you feel better … sooner.” — North Carolina rally Monday.

THE FACTS: That’s misleading, given the far more cautious pronouncements of federal public health officials and scientists. They say a vaccine is probably more than a year away at best and there are no special treatments for COVID-19. The notion of a quick “cure” is not in their vocabulary as they focus on trying to help people avoid getting the disease in the first place.

What’s actually happening: Studies have begun in COVID-19 patients in parts of the world to see if certain antiviral medications could help treat the infection.

Today, there are no proven treatments. In China, scientists have been testing a combination of HIV drugs against the new coronavirus, as well as an experimental drug named remdesivir that was in development to fight Ebola. In the U.S., the University of Nebraska Medical Center also began testing remdesivir in some Americans who were found to have COVID-19 after being evacuated from a cruise ship in Japan.

It’s not known how soon such studies will answer whether any of the drugs help. And many patients recover without needing any treatment. The biggest concern is how to help the fraction who become severely ill.

TRUMP: The U.S. is “ranked by far No. 1 in the world for preparedness” — North Carolina rally.

He’s referring to a report coauthored by Johns Hopkins Centers for Health Security. Hopkins experts on Monday said the U.S. got a “grade” that overall was highest by a few points among a variety of high-income countries that are all at about the same level of preparedness.

But the report’s overall finding: “No country is fully prepared for an epidemic or pandemic,” cautioned Hopkins’ Jennifer Nuzzo, who coauthored the report.

It’s difficult to say from the report that a country that scores two points higher than another is going to fare much better, she added.

In the U.S., the biggest worry is access to that health care. “If fear of the cost of health care is a deterrent, that could create a bad situation where people stay at home, potentially infecting others,” she said. 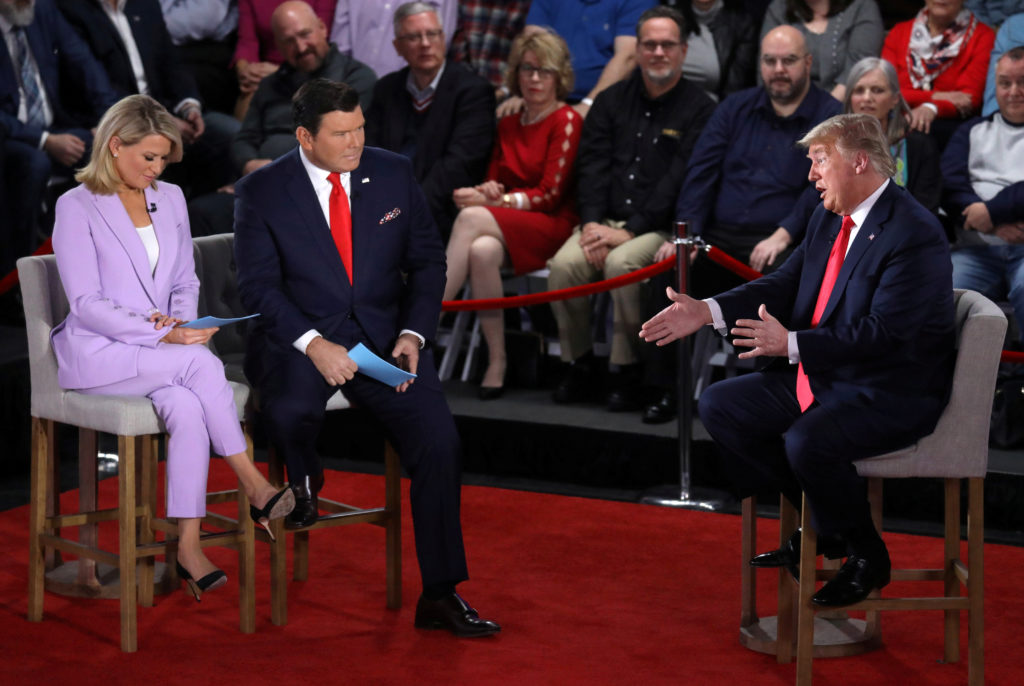 THE FACTS: Far from it.

People who have medical problems or a history of them are protected in the health insurance marketplace because of Obama’s Affordable Care Act, which Trump is trying to dismantle in and out of court.

When Fox News anchor Martha MacCallum challenged Trump’s familiar and false assurance about preexisting protections, Trump obliquely acknowledged he has not delivered on his promise — and apparently won’t before the election.

Republicans have “all pledged” that people with preexisting conditions will have their insurance protected, he said, but for that to happen, “we have to hold the Senate. We have to get the House. We have to, obviously, keep the White House.”

THE FACTS: Yet another false telling of how the program to let some veterans get private health care at public expense came about. It’s a staple of his rhetoric. The Choice program was achieved by Obama. Trump expanded some of the conditions for qualifying for it.