WASHINGTON — Close to a deal, negotiators from Congress and the White House were set to resume talks Sunday, racing to push a $1.4 trillion economic rescue package across the finish line in the face of dire warnings about hospitals across the nation not having the supplies needed to handle an expected surge of coronavirus patients.

With a population on edge, societal norms rewritten and financial markets teetering, all sides indicated they hoped the agreement would provide some relief against the pandemic’s twin health and economic crises, now believed likely to stretch for several months.

In the hours before the closed-door talks were to convene in an otherwise empty Capitol, President Donald Trump’s lead negotiator said the plan was meant to prop up the nation’s weakened economy for the next 10 to 12 weeks.

“I think we have a fundamental understanding and we look forward to wrapping it up today. It will get done,” Treasury Secretary Steven Mnuchin said on “Fox News Sunday.”

“I think the president has every expectation that this is going to look a lot better four or eight weeks from now,” Mnuchin said. “If for any reason, 10 weeks from now with this virus we haven’t won this, we’ll go back to Congress again.”

But while some help appeared to be soon on the way, alarms were being sounded from coast to coast about the wave of coronavirus cases about to crash onto the nation’s health system. New York City Mayor Bill de Blasio had dire, urgent news from the pandemic’s U.S. epicenter: It’s bad and only getting worse.

“April and May are going to be a lot worse,” de Blasio said on NBC’s “Meet the Press,” begging for Washington to help procure ventilators and other medical supplies. De Blasio accused the president of “not lifting a finger” to help his hometown.

“If the president doesn’t act, people will die who could have lived otherwise,” he said.

Trump has defiantly pushed back against criticism he was slow to respond to the crisis, though he continues to send mixed messages as to what, exactly, the federal government is doing. In recent days, he invoked the Defense Protection Act, a rarely used, decades-old measure that allows the president to marshal the private sector, but officials said Sunday that it has not actually been used to compel the private sector to manufacture supplies like masks and ventilators.

Federal Emergency Management Agency Administrator Peter Gaynor said on ABC’s “This Week” that masks are being shipped from the national stockpile but he could not provide details on a concrete timeline. Gaynor could not say, despite being pressed repeatedly, how many masks would be shipped and when they would arrive.

“I mean, there’s hundreds of thousands of — millions of things that we’re shipping from the stockpile. I mean, I can’t give you the details about what every single state of what every single city’s doing,” Gaynor said. “We are working to source from all different kinds of manufacturing. Will we ever have enough? I’m not sure.”

The top four leaders of Congress were set to meet with Mnuchin just hours before a procedural vote in the Senate to advance the massive stimulus bill. The urgency to act is mounting, as jobless claims skyrocket, businesses shutter and the financial markets are set to re-open Monday eager for signs that Washington can soften the blow of the healthcare crisis and what experts say is a looming recession. 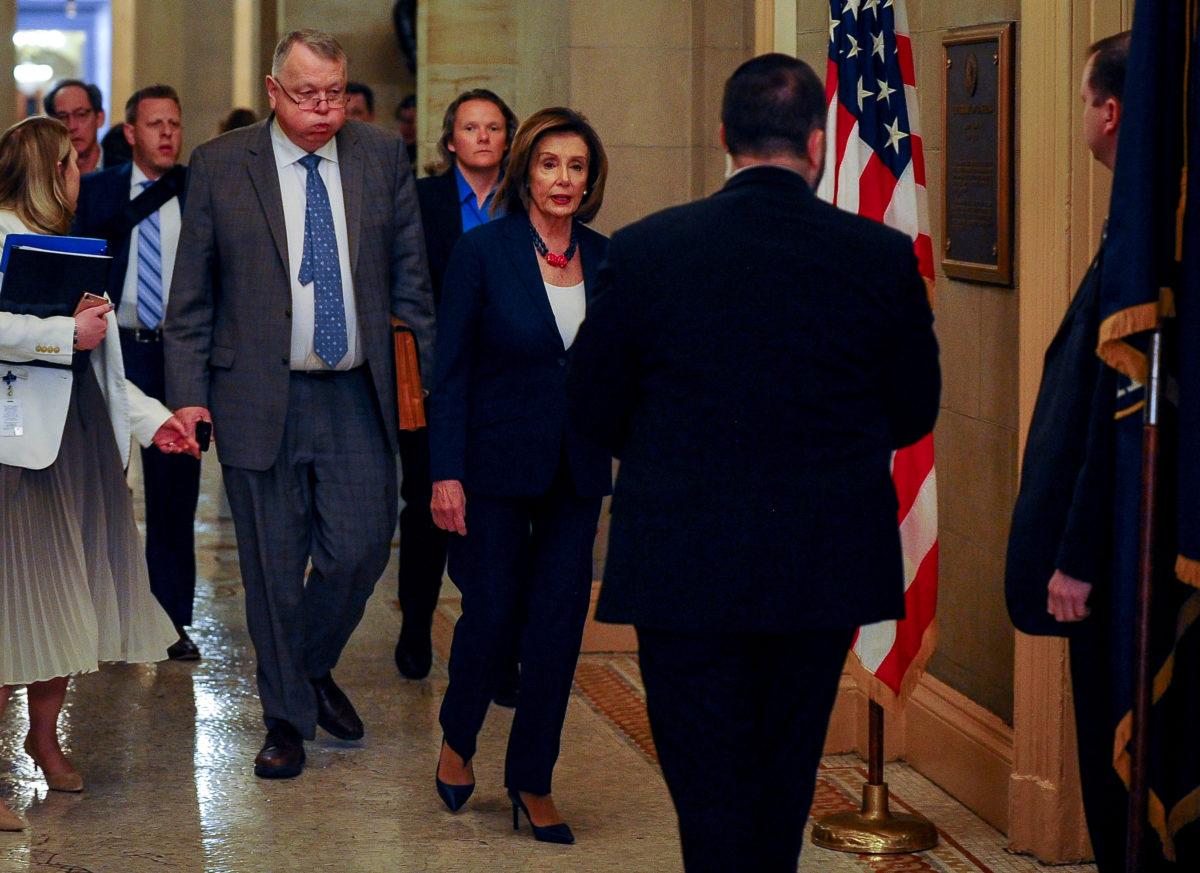 At issue is how best to keep paychecks flowing for millions of workers abruptly sidelined by the crisis. Talks also narrowed on a so-called Marshall Plan for hospitals as well as industry loans to airlines and others all but grounded by the virus outbreak and national shutdown. The post-World War II Marshall Plan helped to rebuild Western Europe.

Senate Majority Leader Mitch McConnell instructed committee chairmen to assemble draft legislation. Officials put the price tag at nearly $1.4 trillion and said that with other measures from the Federal Reserve it could pump $2 trillion into the U.S. economy.

Mnuchin said Sunday that workers and businesses will get assistance to help cover them for the next 10 weeks, spanning small business loans for retention of workers; unemployment insurance; added liquidity into the economy and a “bridge payment” of about $3,000 for a family of four.

The treasury secretary said a significant part of the package will involve working with the Federal Reserve with up to $4 trillion of liquidity to support the economy with “broad-based lending programs.” And he said hospitals will get a “significant amount of money” of approximately $110 billion.

“We’re negotiating a final number,” he said. “The best way for us to get through this is for us to win this war with this virus.”

Talks are also focused on loans to airlines and other industries blindsided by the crisis, as well as possible aid to the states and billions for hospitals and healthcare providers on the front lines of the outbreak. Gov. Gretchen Whitmer of Michigan said Sunday that the auto industry would also likely need government assistance.

The emerging package builds on a GOP proposal, but Democrats have pushed for add-ons, including food security aid, small business loans and other measures for workers.

Trump expressed a clear distaste for any industry, including the airlines, that would use federal assistance to buy back its own stock in an effort to increase profits. However, the buyback provisions are “weak” in the draft text, according to a person unauthorized to discuss the emerging package and granted anonymity. The restrictions on buybacks could be waived by the treasury secretary, the person said.

On Saturday, Trump opened the daily virus briefing with a roll call of his administration’s accomplishments, a week-in-review meant to rebut criticism that the White House was moving too slowly to combat the crisis.

The president pushed back against accusations that he was sluggish to act for fear of upsetting China, though he told aides last month that he had not wanted to alienate Beijing by criticizing its secretive handling of the initial outbreak.

Trump did not lose his temper, as he did the day before. But mixed, vague messaging still ruled the briefing, with conflicting signals about the effectiveness of possible medications as well as timelines for the delivery of medical equipment. The president tweeted Sunday that automakers General Motors and Tesla were given “the go ahead” to make ventilators and other products.

The vast majority of people recover from the new virus. According to the World Health Organization, people with mild illness recover in about two weeks, while those with more severe illness may take three to six weeks to recover.