Biden claims momentum as Buttigieg drops out of race

COLUMBIA, S.C. — Joe Biden fought to unite the Democratic Party’s moderate wing behind his candidacy after scoring a comeback victory in South Carolina’s Democratic primary that forced leading moderate rival Pete Buttigieg out of the race on Sunday.

Biden vowed to improve his campaign operation, his fundraising haul — and even his own performance — as the race pushes toward Super Tuesday. He warned of a “stark choice” between him and Sanders, while making the case he is the candidate that can win up and down the ballot and in states beyond those voting next week.

“I feel good,” Biden said on ABC’s “This Week.” “I can win and I can bring along Democratic victories.”

Biden saturated the airwaves with back-to-back interviews after Saturday’s win, which came on the strength of African American support and at a perilous moment in his 2020 bid. He needed an emphatic rebound after underwhelming performances in Iowa, New Hampshire and Nevada.

The race now pivots to the 14 states from Maine to California that vote on Tuesday in what in effect will be a national primary in a race increasingly becoming a match-up between the two powerhouses representing divergent paths for the party. 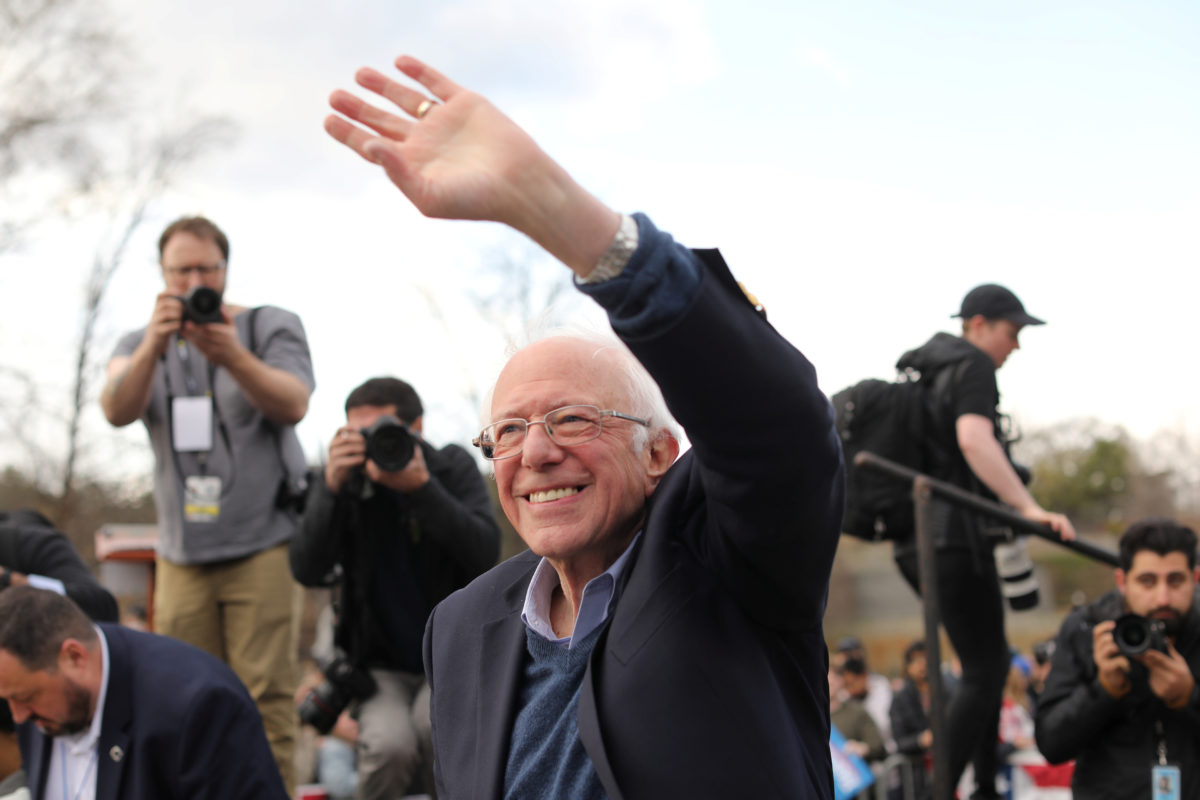 STop rival Bernie Sanders led in fundraising hauls announced Sunday with an eye-popping $46.5 million for February, his campaign said. The senator said it’s not the total amount that should impress but the enthusiasm of working people fueling his candidacy.

“No campaign out there has a stronger grassroots movement than we do,” Sanders said on CBS’s “Face the Nation.” “That’s how you beat Trump.”

Pressure is mounting to prevent a prolonged battle that could stretch into summer as seven candidates remain in the Democrats’ quest to find the strongest possible nominee to take on President Donald Trump in November.

The lagging candidates are being pushed to justify their campaigns or step aside so Biden can engage in a more direct match-up against Sanders, who heads into the coming week eager to surpass his rivals in amassing delegates for the nomination.

Buttigieg was the first to fall. The former mayor of South Bend, Indiana, who put together a surprisingly strong presidential bid, informed his campaign Sunday evening that we was leaving the race. That’s according to three people with knowledge of Buttigieg’s decision who requested anonymity because they weren’t authorized to speak publicly.

There were few signs that anyone else was leaving the race.

Billionaire Mike Bloomberg, who will be on the ballot for the first time next week, said Sunday he’s not going anywhere before Tuesday’s primaries.

“I’m optimistic,” he told voters in Selma, Alabama, where many of the White House hopefuls gathered for ceremonies commemorating civil rights heroism. He has spent more than $500 million advertising in the states set to vote this month.

Bloomberg received a mixed reception as he spoke from the pulpit of Selma’s Brown Chapel AME Church. Ten parishioners stood and turned their backs to the New York billionaire as he talked about his desire to increase black home ownership and wealth. That was after the pastor told the congregation that Bloomberg initially said he was too busy to attend because he had to “beat Donald Trump.” Elizabeth Warren’s team spoke brazenly of pushing into a floor battle at the Democratic National Convention this summer if no candidate emerges from primary season with a majority, as seems increasingly likely.

“The convention in Milwaukee is the final play,” wrote campaign manager Roger Lau in a memo.

Warren brought in $29 million last month and Biden trailed with $18 million, but the former vice president said he raised $5 million in the last 24 hours, which is more than any previous day in his bumpy campaign.

Biden declined to ask rivals to bow out. “It’s not for me to tell another candidate to get out of the race,” Biden said on “Fox News Sunday.”

Even with the victory, the shortcomings of Biden’s campaign remain, including a lack of robust funding and organization that have drawn concern from top allies. He is barely running any television advertising in Super Tuesday states.

Bloomberg announced his own plan to deliver a three-minute prime-time address Sunday night on two television networks. He didn’t say how much he paid for the air time, which is unprecedented in recent decades. And both Sanders and Bloomberg have many more staff and volunteers than Biden.

Leveling his own direct attack on Sanders, Biden declared, “The people aren’t looking for revolution. They’re looking for results.”

Biden won about three times as many delegates in South Carolina as Sanders, his nearest rival, giving a momentary respite to anxious Democrats who feared that the democratic socialist would finish February with four consecutive top finishes that would make it difficult for anyone to overtake him.

The Associated Press declared Biden the winner just after the polls closed in South Carolina. The AP based the call on data from AP VoteCast, a survey of the electorate conducted for the AP by NORC at the University of Chicago. The survey showed a convincing win for Biden.

But Biden made an aggressive round of media appearances on Sunday in an effort to counter Bloomberg’s massive spending. He’s also working to secure endorsements from prominent Democrats and, shortly after the Saturday results were in, he got the backing of former Virginia Gov. Terry McAuliffe.

Biden downplayed the lack of an endorsement from former President Barack Obama, whose name he often invokes on the campaign trail to voters nostalgic for his administration. Biden said on ABC he has to earn this “on my own.”

The South Carolina primary was the first major test of the candidates’ appeal among black voters. That courtship continued Sunday in Selma. A number of states that vote on Super Tuesday, including Alabama, Tennessee, North Carolina and Virginia, have substantial black populations.

One of the candidates who spent recent weeks wooing black voters, billionaire activist Tom Steyer, ended his campaign on Saturday after a disappointing third-place finish. He spent more than $24 million on television advertising in South Carolina — more than all of his rivals combined — but never found a clear lane in the crowded contest.

Trump weighed in on Twitter early Sunday, taunting Bloomberg — as he often does potential rivals. The president suggested the billionaire’s advisers are simply on a “gravy train” leading him down a “dark and lonely path” without hopes of winning the nomination.

Aides to Bloomberg’s campaign said earlier they still believe the former New York mayor can win in a handful of states that vote on Super Tuesday, including Arkansas, Alabama, Oklahoma, Virginia and North Carolina.

Through four contests, Sanders has a healthy, but shrinking, delegate lead.

The AP has allocated at least 58 delegates to Sanders, including two added Sunday as South Carolina’s remaining votes dribbled in. Biden vaulted past Buttigieg into second place with at least 50 delegates — shrinking Sanders’ lead from what had been 30 delegates before South Carolina to eight. Buttigieg, Warren and Klobuchar remain stuck at 26, eight and seven, respectively.

Trump was paying close attention to the Democratic race.

“How could you be easier to beat than Joe? That guy can’t put two sentences together,” Trump told attendees Saturday of the Conservative Political Action Conference in suburban Washington. “But you know he is more down the middle. Everyone knows he’s not a communist and with Bernie there a real question about that.”

Biden won 64% of the votes cast by African Americans. He also did well with older voters, women, moderates and conservatives and regular churchgoers, according to AP VoteCast.

There was also evidence that Biden’s status as Obama’s two-term vice president helped him win over African Americans.

VoteCast found that 45% voters in South Carolina wanted to return to the politics of the past, compared with about a third in Iowa and New Hampshire. That includes the 52% of African American voters who said they want a Democratic presidential nominee who would emulate the Obama presidency.

Speaking at a North Carolina Democratic Party fundraising gala, Perez noted that to win the nomination, a Democrat must win 1,991 delegates — and only a fraction of those have been allocated in the party’s first four primaries.