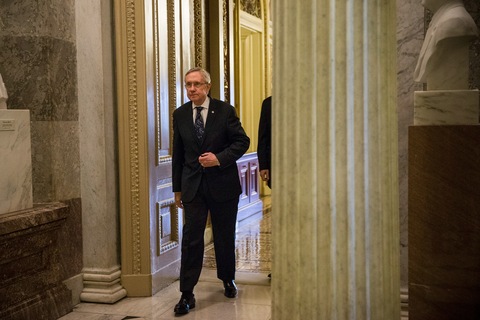 Senate Republicans have mounted a fight with the White House over President Barack Obama’s nominees to lead key agencies and serve on the courts, reigniting a battle over power and Senate rules.

The GOP on Thursday blocked two of Mr. Obama’s nominees — Rep. Mel Watt of North Carolina to lead the Federal Housing Finance Agency and Patricia Ann Millett to fill one of three vacant seats on the Circuit Court of Appeals in Washington D.C.

After the Senate failed to muster the 60 votes needed to break the filibuster, Senate Majority Leader Harry Reid hinted he would revisit rule changes and the so-called “nuclear option” giving the majority more power to approve nominees. That basically means using a parliamentary move to adjust the rules governing the chamber with a simple majority vote instead of a two-thirds vote. Democrats control 55 seats.

“Something has to change,” Reid said.

Republicans contend Watt, nominated in May, does not have enough experience to lead the agency, which oversees Fannie Mae and Freddie Mac. He is the first sitting member of the House to be denied confirmation in 170 years, the Los Angeles Times’ Michael Memoli reports. “Members of the Congressional Black Caucus stood silently on the floor during his vote to protest Republicans’ blocking of an African American to a senior post,” he writes.

Democrats complained change is necessary, and called for action.

The votes put a screeching halt on what looked like progress when it came to Mr. Obama’s selections for major posts. Earlier this week, the Senate approved the president’s choices to lead the Office of Personnel Management and the Federal Communications Commission.

But still pending are the other vacant slots on the D.C. court and two big nominations: Jeh Johnson to be Homeland Security Director and Janet Yellen to lead the Federal Reserve Bank. And Sen. Rand Paul, R-Ky. indicated he will block the president’s Yellen nomination, even though he predicts she ultimately will be confirmed.

White House Press Secretary Jay Carney scoffed at Thursday’s action, calling it nothing more than “politics.” Carney told reporters the White House hopes there is “an opportunity for these nominees to move forward.”

Sen. John McCain on Thursday called for a “fix” to constant confrontations on the floor.

Earlier this summer, McCain was among a group working to negotiate a smooth process for some of the president’s nominees, with leaders agreeing not to change the chamber’s rules so the majority can muscle nominees through. It’s a process described by Politico’s Burgess Everett as a “relative peace” over the last few months.

Roll Call’s Niels Lesniewski has a tidy explainer about what happened Thursday:

The outcome was foretold when Sen. John McCain appeared on the floor shortly before noon to announce that he thought the Watt and Millett nominations were extraordinary circumstances under the terms of the 2005 “gang of 14? agreement that avoided a similar standoff.

“As to both the nominees we are considering today, I find and it is my judgment as a United States senator that extraordinary conditions exist,” the Arizona Republican said.
McCain was acutely aware what his declaration might mean, immediately suggesting further discussions with Reid.

“If we go to the nuclear option, which I understand some of my colleagues are now frustrated to the point where they’d like to, meaning that 51 votes will now determine either nominees or other rules of the Senate, we will destroy the very fabric of the United States Senate,” McCain said.

Another confrontation — on these nominations or others — seems inevitable. Even as Republicans pledged to stop Ms. Millett, two more nominees to the appeals court were working their way through the Senate confirmation pipeline.

Robert L. Wilkins, a Federal District Court judge, cleared the Senate Judiciary Committee on Thursday by a 10-8 party-line vote. Cornelia T. L. Pillard, a Georgetown law professor, was already approved by the committee and is awaiting a vote on the Senate floor.

There are still three vacancies that Mr. Obama is trying to fill. Republicans are pushing a bill that would eliminate those seats permanently because they argue the court has a light caseload. That has prompted Democrats to accuse Republicans of trying to change the rules simply because they do not like the president who is picking judges.

The Senate is not expected to vote again until Monday evening. With control of the upper chamber on the line next fall, the issue isn’t likely to go away any time soon.

WHAT’S NEXT FOR THE GOP?

On the NewsHour Thursday, Judy Woodruff spoke with Maine Republican Sen. Susan Collins about the GOP’s future amid autumn turmoil.

She said recent poll numbers showing the GOP at its lowest levels in history are a “clarion call” for her party. While Collins said she strongly disagreed with the “tactics” that led to the partial government shutdown, she applauded the tea party’s ability to shine new light on spending and the national debt.

“I believe in a big-tent Republican Party where there’s room for a variety of views,” Collins said. Though she lamented the “shrinking middle.”

And you can see the other interviews in the series here.

Amazing that Biden was nearly thrown overboard in ’12, since after election he saved Obama on debt ceiling. http://t.co/aZ5ScPCfmP

The @RedSox dominated the #WorldSeries, on the field and on Facebook http://t.co/L2kMq4YkAz pic.twitter.com/2tFqDVGW3b

@Marty2634 No plans for the moment. Did you carve a pumpkin this year? I made one of @GroverNorquist! pic.twitter.com/PWhvRohX5P

A big congrats to @AmyKDacey on becoming the new CEO of the DNC – an inspired choice by @DWStweets. Well Done!!

.@RNC is lucky to have @alipardo RT @learyreports Ali Pardo hired away from @marcorubio press shop to be RNC Hispanic media press secretary.

Why is the @JFKJrForum such a magical place? What are we doing to keep it that way? Learn more in this video: http://t.co/UzFToCVCfH