The next big problem: government red ink First a little happy news: budget cuts and increased revenue (from a warming-up economy among other things) have again cut the federal deficit. The Congressional Budget Office predicted Monday that the deficit will again dip in 2015, down to $468 billion. More importantly, that’s 2.6 percent of GDP, which is below average and which hovers around the current economic growth rate, making it a potentially sustainable level of red ink. But that isn’t going to last long.

The problem The same CBO report gave a sharp warning about the years just around the corner, forecasting that under current policy (including the sequester/budget cuts) the deficit will start to rise again in 2018. And that the nation will again be hitting trillion-dollar budget shortfalls starting in 2025. (Why? Medicare and Social Security are one major reason.) The result? The national debt will reach 79 percent of GDP by 2025, “eventually heightening the risk of a fiscal crisis,” CBO writes. The graph ahead is not pretty — one of our favorites is this one looking at debt as a percentage of GDP from the Committee for a Responsible Fiscal Budget. 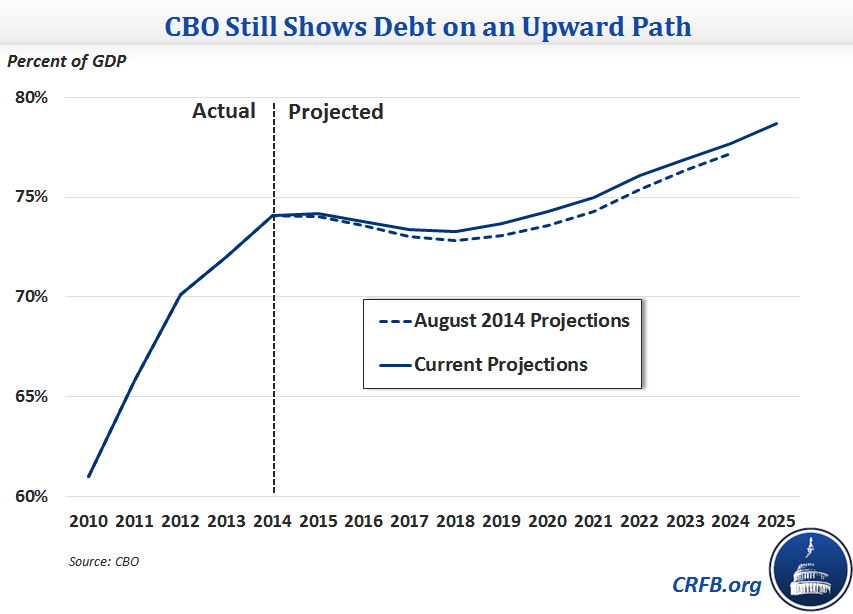 This makes for a clear and potentially dangerous dip. Congress and the next president will live with a few years of potential fiscal stability but those years will be their best chance to try and avert the coming steep issues ahead. In other words, this tees up a major issue for the next president.

A change in costs of the new healthcare law: Deep inside the CBO report (Appendix B, pg 129) is an interesting conclusion about how much the health insurance provisions in president’s Affordable Care Act will cost government. The CBO states that cost will ultimately be 20 percent lower than the office initially expected. Why? This gets a bit wonky, but CBO says the driving force is largely an increase in children getting health care through Medicaid. Wait? That’s a government program, right? Yes, but when children go on Medicaid, they sometimes come off the health insurance their parents have through their jobs. That health insurance is a nontaxable benefit. Removing it increases the tax base and raises revenue. We warned you this was wonky. Basically, CBO says more children are expected to move from private health care to Medicaid. CBO Director Doug Elmendorf will get asked about all of it today at 10:30 a.m. EST when he testifies before the House Budget Committee.

2016 will likely be the most expensive election in history: It was revealed Monday that the billionaire Koch Brothers network is vowing to spend some $889 million in 2016, more than double the approximately $400 million it spent in 2012. That is a whopping number and an early indicator that 2016 will be the most expensive in American electoral history. Consider that a TOTAL of just more than $2 billion was spent in 2012, the previous record for most expensive, and it would be more than either President Obama’s ($684 million) or Mitt Romney’s ($433 million) campaigns spent. As Nick Confessore points out in the New York Times: “In the last presidential election, the Republican National Committee and the party’s two congressional campaign committees spent a total of $657 million.” That’s going to mean candidates will need even more money than before. Maybe for the nearly 30 candidates considering bids in 2016, their early bumper stickers should read, “Billionaire or Bust.”

Daily Presidential Trivia: On this day in 1981, President Ronald Reagan greeted the 52 former American hostages released by Iran at the White House. How long were those hostages held in Iran? Be the first to tweet us the correct answer using #PoliticsTrivia and you’ll get a Morning Line shout-out. Congratulations to Dogvis ‏(@davismread) for guessing Monday’s trivia: What was Clinton’s famous line about Monica Lewinsky from the 1998 news conference that later turned out to be a lie? The answer: “I did not have sexual relations with that woman”.

Left: A new Congressional Budget Office report forecasts that under current policy, the deficit will start to rise again in 2018. Image by Travel Images/UIG via Getty Images.