Does having a college degree matter in a president?

‘College’: Jeb Bush’s speech on foreign-policy will get the 2016 attention today, and we noted yesterday that Bush at some point needs to show how his handling would be different than his brother’s. But the other story that continues to get buzz on the presidential trail is the fact that Wisconsin Gov. Scott Walker does not have a college degree. Liberals have tried to draw a line between Walker’s lack of a degree and his slashing of funds for higher education in the state. But how much does having a college degree matter? And will the fight help or hurt Walker? (By the way, Kentucky Sen. Rand Paul, who doesn’t have a bachelor’s degree, either, but does have a medical degree from Duke — yes, you can do that — inexplicably referred twice in one day to his “biology degree.” That sparked the Washington Post’s Fact Checker to call him out.)

Walker’s not alone: For the record, nine presidents have been elected without a degree — George Washington, Andrew Jackson, Martin Van Buren, Zachary Taylor, Millard Fillmore, Abraham Lincoln, Andrew Johnson, Grover Cleveland, and Harry Truman. Two of them, you’ll notice — Washington and Lincoln — are on Mount Rushmore. The last elected without a degree, though, was Truman in 1948. He is the only one, by the way, in the last 114 years. Republican Barry Goldwater in 1964 was the last to be a major party nominee without one. Democrat Paul Simon in 1988 was the last major candidate for president without a college degree.

So does any of this matter? Walker was 34 credits short of his degree at Marquette when he left. That’s at least a year of full-time work — not just a couple classes. His reason? “I kept thinking I’d go back, got married, had one kid, had another kid, next thing you know… you’re worrying more about paying for your kids’ college education than you are for your own,” he told the Milwaukee Journal-Sentinel last year. As hard as it might be to believe for the intelligentsia, some 60 percent of Americans actually say they do not have a bachelor’s, associate’s or college certificate. But views have changed about the importance of a degree. Gallup found that 70 percent said a a degree is “very important,” while 23 percent said it’s just “fairly important.” That’s a switch from the late 1970s when a plurality — 46 percent — said it was just “fairly important” and just 36 percent said it was “very important.” 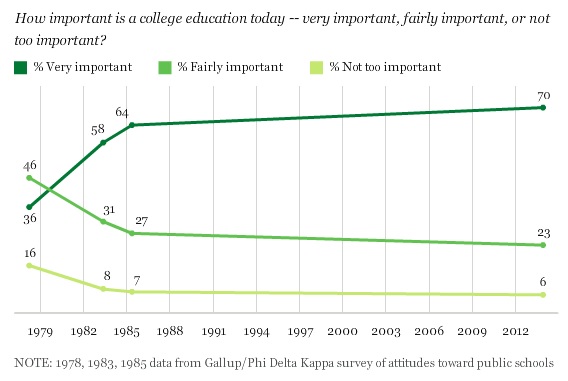 Walker will ultimately be judged on his record: Of course, that has to do with how jobs and industry have changed. It’s much more important to have a college degree today than it was a generation ago, because factory jobs have been reduced or outsourced, manufacturing doesn’t pay as well, and vocational training has been decreased. Clearly, Walker was able to get a job and be successful, rising to governor in his home state. His lack of a degree might even help him in a GOP primary. He can use his attempt at changing the University of Wisconsin’s focus from the “Wisconsin Idea” to “workforce needs” and any kind of lefty critique of it or his not having a degree to paint a picture of himself as an anti-elitist, who didn’t need a fancy degree to make it. It’s kind of the anti-Obama, anti-academic. Instead of a “contemplator,” he’d be a “common-sense fighter.” In a general election, though, Walker’s lack of a degree could hurt with some; they might question his depth and willingness to dive into important issues and ask why he chooses some of the fights he does. It’s a gambit Walker is willing to play to get through a primary and then point to the fact that he has won in a blue state. Ultimately, Walker will be judged on his record as governor and what his policy proposals are. That will be good enough for some and too controversial for others.

Daily Presidential Trivia: On this day in 1861, Confederate President Jefferson Davis was inaugurated in Montgomery, Alabama. Who is the only U.S. President to have served in the Confederate Congress? Be the first to tweet us the correct answer using #PoliticsTrivia and you’ll get a Morning Line shout-out. Congratulations to Claire M. Steen ‏(@BearLoves14) for guessing Tuesday’s trivia: Which Chinese leader did Nixon meet with during his trip? The answer: Mao Zedong.

In Greenville, SC. Pastor’s speech to open congressional forum asks God to “take the fat out of the food so we’re not too bloated to listen"

Left: Wisconsin Governor Scott Walker walks off the stage after speaking at the Freedom Summit in Des Moines, Iowa on January 24, 2015. Photo by Jim Young and Reuters.