Not many of Obama’s priorities are likely to get through Congress: State of the Union speeches get a lot of attention. A prime-time address by the President of the United States to a joint session of Congress is pretty impressive stuff. Lots of policies and priorities are laid out, but how much can and will actually get done, especially with a divided Congress? Answer: Not much. Recent history provides a pretty good roadmap. In last year’s State of the Union, when Democrats controlled the Senate and Republicans had a smaller majority in the House, President Obama laid out 18 specific action items he wanted Congress to take up, but just two of those — on job re-training and increasing funding for research — got through Congress and became law, according to a NewsHour analysis. (And funding for research only kept with inflation, not representing much of an increase.)

Here’s a list of the priorities and the (lack of) congressional action taken (in order of when Obama mentioned them in his speech): 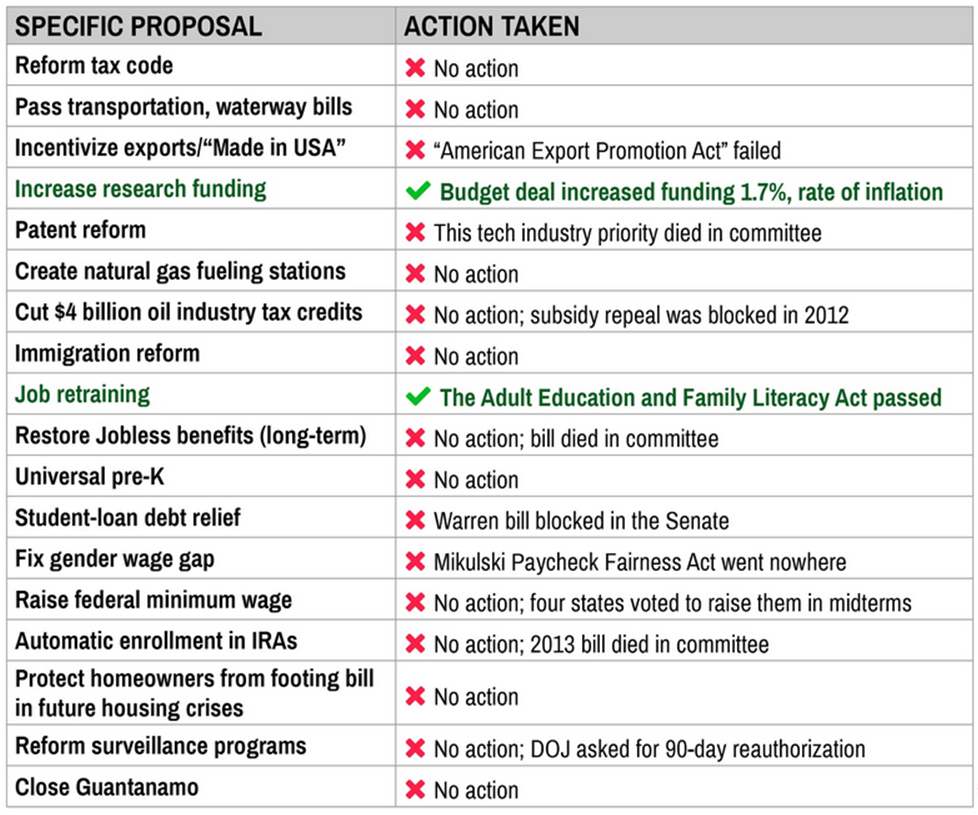 Taking executive action: To address some of the priority areas the president mentioned in last year’s State of the Union that Congress did not take up, the president acted on his own, raising the ire of the right. Seeing the success of state initiatives on things like the minimum wage, which Congress hasn’t raised for nearly six years, the president has been encouraging states to move on more of his priorities. Among the items mentioned in his 2014 State of the Union that he wound up taking executive action on:

Daily Presidential Trivia:
On this day in 1937, President Franklin Delano Roosevelt became the first U.S. President to be inaugurated on January 20. Which amendment to the Constitution established January 20 as the start and end of every presidential term? Be the first to tweet us the correct answer using #PoliticsTrivia and you’ll get a Morning Line shout-out. Congratulations to William C Rives ‏(@MrWmCR) for guessing Monday’s trivia: Which president held the first live news conference? The answer: John F. Kennedy.

Hillary Clinton laser-focusing on the needs of hurting, hard-working Americans by holing up in her Chappaqua mansion. http://t.co/l8KZGxc0rG

What we were looking at on this day in the 2008 cycle… http://t.co/xzKlGQm3E9 pic.twitter.com/lJ2pMU3BJB

Reid sustained broken bones, concussion, eye injury exercising. His drs don’t want him to stay til 11 pm on his 1st day back at work