How the battle of the sexes shifted power in DC

Women in the new Congress: There will be 100 women for the first time in Congress. Sounds like a big number, but the reality is that despite comprising more than half the population and more than half the voting electorate, women will still comprise less than a fifth of all lawmakers in the House and Senate. The number hardly represents a boon for women in Congress. Of the 15 women who ran for the Senate, just four won. The Senate is likely to have the same number of women as it did last Congress unless Mary Landrieu pulls off a surprising runoff victory next month. The House will pick up two to six women. Governors are net even. “True, the election did set a record of sorts: Next year, more than 100 women will serve in Congress for the first time in history,” the New York Times’ Sheryl Gay Stolberg writes. “But women in both parties say the growth is incremental and the numbers are disappointing.”

So how did women vote in this midterm? Women made up 51 percent of all voters in 2014, once again a majority of voters. Democrats won them 51-47 percent. But, as we noted before the election, Democrats need to win women by double digits to have success. (See page 16 of our PBS Election Briefing Book.) Republicans won men in 2014 by 16 points.

On the flip side, look at how men voted. They turned out as a larger share of the population and voted for Republicans by a much greater margin.

The marriage gap: More important to Democratic hopes than women overall are unmarried women. They generally vote 2-to-1 for Democrats, while married women have trended more Republican. In this election, unmarried women were 21 percent of the electorate, mirroring their 2010 and 2006 midterm turnout and down from 23 percent in 2008 and 2012. And their margin for Democrats was down 14 points from the 2012 presidential election. 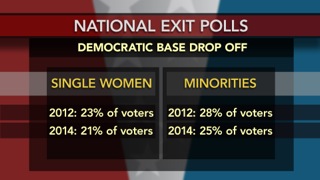 Married women, on the other hand, voted by an even wider margin in this election for Republicans than in the presidential election.

Two key states — Iowa and Colorado: The swing states of Iowa and Colorado were two of the three states that were part of that “Democratic firewall” (North Carolina being the other). But all three of those purple states went Republican. How did that happen when President Obama won them twice? Democrats were aiming to drive up their margins with women and turn them out. It didn’t happen in Iowa. 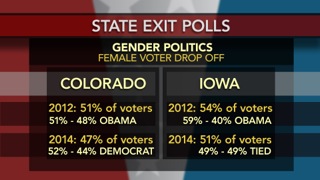 It did happen in Colorado, but they lost men by a huge margin. Udall used a single-issue campaign to try and get women out, but the Denver Post criticized him for it. He wound up winning women by a larger margin than President Obama, but they were a smaller percentage than men. Latinos were the same percentage of voters — 14%. But men made up more voters and went for Rep. Cory Gardner by 16 points. President Obama won men in Colorado in 2012 by 5 points.

Daily Presidential Trivia: On this day in 1900, President McKinley was re-elected when he beat William Jennings Bryan for the presidency. How many times did Bryan run for president and against whom? Be the first to tweet us the correct answer using #PoliticsTrivia and you’ll get a Morning Line shout-out. Congratulations to Peter Szabo (@p_szabo) for guessing Wednesday’s trivia: When was the law changed to limit the president to two terms? The answer was: Congress passed the amendment in March 21, 1947 and it was ratified by all the states by February 27, 1951.

Earnest on @NewDay on Bourbon summit: POTUS "eagerly looking for an opportunity" to share bourbon with McConnell. But may not be public.

Mitch McConnell won by 35% in Lee County, home of his "not my job" Beattyville statement. #kysen

This Venn diagram shows where you can both smoke weed and get a same-sex marriage http://t.co/JZxcQ0jhYZ pic.twitter.com/oRcM3V7fSU

Left: Women made up 51 percent of all voters in 2014. But Democrats needed to win them by double digits to have success. Photo by Daniel Acker/Bloomberg via Getty