FBI support is eroding, but most Americans still back bureau, poll says

Most Americans say Special Counsel Robert Mueller is conducting a fair investigation into the Trump campaign’s alleged Russia ties and should be allowed to complete the probe. But recent polling data shows that support is eroding, according to the latest poll from PBS NewsHour, NPR and Marist.

Additionally, 38 percent of Americans said they have never heard of Mueller, the former FBI director leading the investigation into the Trump campaign’s interactions with Russia during the 2016 presidential election. Americans who had heard of Mueller were split in their opinion about him, with 32 percent saying they favored Mueller and another 30 percent saying they didn’t. 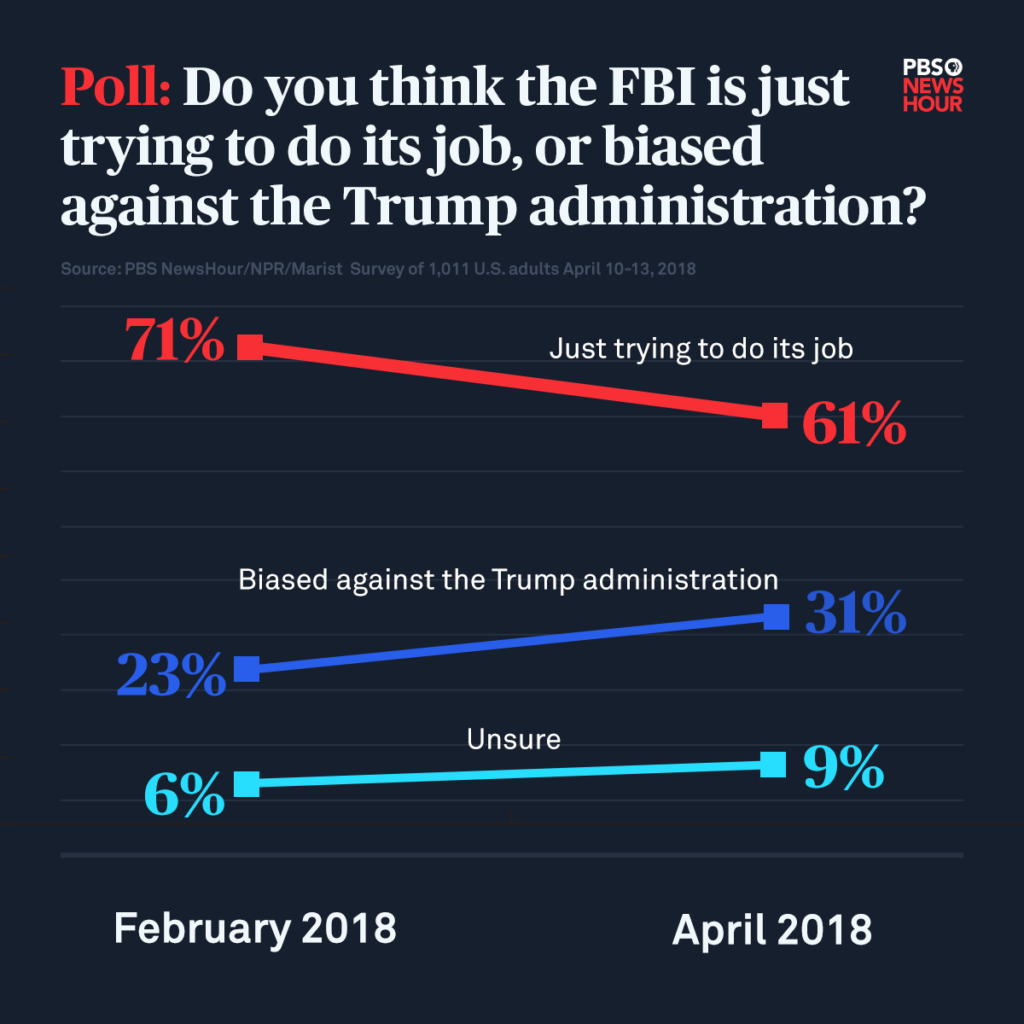 The figures suggest a slight decrease in support and a growing degree of uncertainty among Americans about Mueller’s work during the last two months. In February, 70 percent of U.S. adults said the special counsel should finish his job, and 14 percent of Americans said they weren’t sure. Since then, the White House has denied rumors that President Donald Trump plans to fire Mueller. Trump has called Mueller’s investigation “A TOTAL WITCH HUNT” on Twitter and told reporters it amounts to “an attack on our country.”

President Donald Trump has called Mueller’s investigation “A TOTAL WITCH HUNT” on Twitter and told reporters it amounts to “an attack on our country.”

Despite sharp criticism from a sitting president about an ongoing investigation, 45 percent of Americans still say Mueller’s work is fair. But polls suggest that support is slipping compared to February, when 53 percent of U.S. adults said he was fair. At the same time, the percentage of people who said they simply don’t know if the special counsel’s work has been fair or unfair rose slightly — up from 20 percent in February to 26 percent this month.

The public’s trust in the FBI remained high in the days leading up to the release of former FBI director James Comey’s book about Trump this week. But support for the bureau may show signs of slipping, according to the poll. Fifty-four percent of Americans said they were confident in the FBI. And when asked if they thought the FBI was simply doing its job or was biased against the Trump administration, 61 percent of Americans said the agency was doing it’s job. But that number has dropped — from 71 percent in February.

Although trust in the agency remains among the highest of any public institution, “there’s been a slight decline in confidence for the FBI,” said Lee Miringoff, who directs the Marist Institute for Public Opinion.

The public’s views of the FBI broke down along party lines. Democrats have largely remained supportive of the FBI and its work. Republicans and politically independent individuals increasingly think the nation’s top law enforcement agency is skewed in its treatment of the Trump administration as allegations of wrongdoing ensnare a growing number of the president’s staff.

Most Americans have lost more faith in the security of the nation’s election systems.

And most Americans have lost more faith in the security of the nation’s election systems since the last NewsHour/NPR/Marist poll asked the same question two months ago. In February, 41 percent of U.S. adults said it was unlikely that Russia would interfere in the upcoming November midterm elections.

But when asked this month about the security of those elections and if Russia posed a threat, most U.S. adults — 55 percent — said they now think Russia will likely interfere. A majority of Democrats and Independents think that will probably happen, while most Republicans hold out hope that Russia will mind its own business and stay out of the elections.

Left: File photo of the Federal Bureau of Investigation building in Washington, D.C. by Rich Clement/Bloomberg