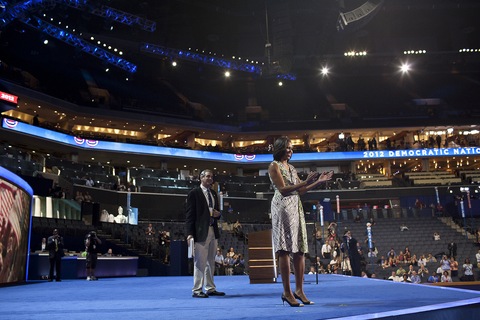 First lady Michelle Obama waves to delegates after her soundcheck at the Time Warner Cable Arena in Charlotte, N.C., on Monday. Photo by Jared Soares for PBS NewsHour.

CHARLOTTE, N.C. | The Democratic National Convention officially gets underway here Tuesday and over the next three days members of the party will make the case why President Obama should be re-elected and draw sharp contrasts with the vision put forward by Mitt Romney and the Republican Party last week in Tampa.

On Monday, Democrats began that process by releasing the 2012 party platform, which is expected to be officially adopted by delegates Tuesday. Among the planks:

>- We will block Republican efforts to subject Americans’ guaranteed retirement income to the whims of the stock market through privatization. We reject approaches that insist that cutting benefits is the only answer.

The differences between the Democratic and Republican documents are stark. The GOP platform called for transforming Medicare into a voucher-like system, reducing tax rates for all Americans and banning abortion and same-sex marriage.

And by making the election a choice rather than a referendum on the last three-and-a-half years, Democrats are hoping to improve their chances in November. “This election is not simply a choice between two candidates or two political parties, but between two fundamentally different paths for our country and our families,” the platform said.

It’s important to note that party platforms don’t actually require anyone to do anything, and while each side can lay out a vision for the nation within them, we know of no president who keeps a copy on his desk as he takes action.

The Democratic message Tuesday night will be delivered by a number of high-profile speakers, but all eyes will be on San Antonio Mayor Julian Castro, the first Latino to give a DNC keynote address, and first lady Michelle Obama.

The Dallas Morning News’ Robert Garrett writes that Castro “brings a life of contrasts” to his convention speech Tuesday.

He’s shy, bookish and retiring, yet has chosen a life in public service.

Though a red-state mayor, he’s asking San Antonio voters this fall to raise taxes on themselves to fund a pre-kindergarten program.

A nonpartisan officeholder in a city manager form of government, he’s not afraid to tackle extracurricular subjects, such as improving education, and take stands on hot-button issues like immigration, sex education and gay rights.

He’s steeped in San Antonio’s Chicano civil rights movement, which his mother helped lead, but Castro has cultivated both the city’s Anglo-dominated business establishment and its black community. Last year, he won re-election with 83 percent of the vote.

Castro is hyped as a future statewide or even national candidate despite his short resume. The mayor, though, has dug in to solve problems at the local level for most of a decade — and plans to stay there for a while.

CNN’s Sarah Aarthun, meanwhile, suggests that the first lady will “set the tone” for the week with her remarks.

Judy Woodruff talked with Obama deputy campaign manager Stephanie Cutter on the NewsHour Monday night to get a sense of how that messaging will unfold. Watch that conversation here or below.

You can watch it all in our 24-hour livestream.

On Labor Day, it seemed fitting to take a look at the union workers who have traditionally aided the Democratic Party, and some of the tensions playing out on the ground in this right-to-work state.

Ray Suarez reported on labor’s influence and how the city is preparing for the festivities. Watch:

Watch the labor discussion here or below.

It’s no accident the convention is held in battleground North Carolina. Gwen and Judy talked with Sen. Kay Hagan and University of North Carolina’s Kareem Crayton about the role of the south on Election Day, and the task ahead for the president. Watch the discussion here.

Analysts Mark Shields and David Brooks weighed in on expectations for the week. Watch that here.

And Hari Sreenivasan explored how the Democrats used the CarolinaFest concert as an organizing tool.

Our livestream lineup for Tuesday:

Keep an eye on our Flickr feed of images from the convention from freelancer Jared Soares (@jaredsoares). Every image in the stream is free for use under a Creative Commons license.

Oh yes, those are Obama tube socks at the #DNC2012 twitter.com/lornabaldwin/s…

BEST OF THE WEB