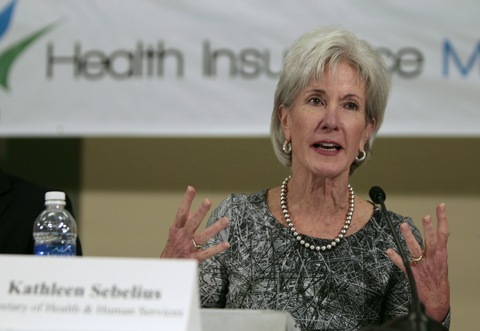 Health and Human Services Secretary Kathleen Sebelius has acknowledged that the launch of HealthCare.gov has been “rockier than we would have liked.” Photo by Erich Schlegel/For The Washington Post via Getty Images

If you thought Tuesday’s hearing was testy, that was just a warm up.

Administrator of the Centers for Medicare and Medicaid Services Marilyn Tavenner opened her remarks at the House Ways and Means Committee with an apology for problems plaguing Americans attempting to sign up for the insurance exchanges online.

But that did little to brace the official for the peppering of questions she received as lawmakers argued over the merits of the Affordable Care Act in general.

Wednesday’s main event is Health and Human Services Secretary Kathleen Sebelius appearing before the House Energy and Commerce Committee to take many of the same questions. Lawmakers — many whom have called for Sebelius to be fired or to resign — aren’t expected to hold anything back.

The hearing began at 9 a.m. EDT. We will live stream it here once it becomes available.

At the same time, President Barack Obama will make his case to the American people for how he believes the health care law can be successful.

Mr. Obama is headed to Boston’s Faneuil Hall for a speech about the Massachusetts health care law that then-Gov. Mitt Romney signed in 2006. A White House official said the president will address issues with HealthCare.gov during his remarks.

Mr. Obama will hold up Massachusetts’s law as a “model in drafting the Affordable Care Act,” and will suggest that the state’s experience during its first year of enrollment “offers important lessons for what we can expect over the next six months,” the White House said.

He is expected to stress that 97 percent of Massachusetts residents have health insurance coverage, and that criticism of the law didn’t pan out. Mr. Obama also will rattle off some of the successes he believes have already been realized since the law he signed went into effect.

Wednesday’s action comes amid new scrutiny on insurance coverage. Several reports are suggesting that thousands of people will be booted from their plans as the implementation of the Affordable Care Act goes into full effect.

People who buy their own insurance sign 12-month contracts, so the renewal process underway is a longstanding practice in the industry. Insurers would use the renewal period to change coverage and raise premiums regardless of Obamacare. The difference this year is that insurers will now be required under Obamacare to provide a minimum package of benefits that consumers probably weren’t receiving before. That means premiums will be higher, but the tradeoff is better coverage, greater security and tax subsidies for many Americans to offset the costs, [White House Press Secretary Jay Carney] said.

The White House’s PR challenge is that 5 percent of the population — 15 million — is still a huge number of people potentially experiencing changes that Obama promised they wouldn’t face.

Back on Capitol Hill, Democrats used the opportunity to lambaste Republicans for trying to kill a program that has been law since 2010 and which was upheld by the Supreme Court last year.

Rep. Joe Crowley, D-N.Y., accused the GOP members of the panel for having “nothing to offer” but “broken ideas,” and predicted to Tavenner the Republicans “will attack and tear down” anything related to the health care law.

But the real fireworks came between Rep. Bill Pascrell of New Jersey and Rep. Tim Griffin of Arkansas.

“Let’s not water wine here. Let’s say it like it is. You refused to expand, many of these governors’ Medicaid,” the Democrat said. “They refused to set up state marketplaces through — and leaving millions of dollars in outreach on the table in education funding. What are you going to do about the approximately 17 million children with preexisting conditions who can no longer be denied health insurance coverage?”

“It’s a false choice to say it’s Obamacare or nothing. There are numerous proposals, including the one that I’m a co-sponsor of,” said Griffin, a Republican who recently announced he is retiring instead of seeking re-election.

Pascrell would have none of it: “Are you serious, what you just said? Are you really serious? We have gone through 44 votes — 48 votes now — of you trying to dismantle this legislation. You call that cooperation? I don’t.”

The NewsHour looked at the hearing and then Gwen Ifill moderated a debate between Jonathan Gruber of MIT and industry consultant Robert Laszewski about the insurance policy cancellations.

Keep an eye on the Rundown blog for breaking news throughout the day, our home page for show segments, and follow @NewsHour for the latest.

tnx to @ColbertReport for their continued support of @Newshour by using us the fact people so often http://t.co/ZxccSJS9kp

In 2001, GOP lost both NJ and VA while Bush at 87% job approval. These races are not often indicators for national sentiment.