The coronavirus pandemic and a historic surge in voting early and by mail have sparked a number of questions about election night, among them: What will calling races look like, and when will we have results?

Since 1848, the Associated Press has played a key role in calculating the U.S. presidential election results. This year, it’s had to adjust for some unusual circumstances as it prepares to determine winners in more than 7,000 races for seats in state legislatures, Congress and the White House. But their process, which includes a voter survey system first widely used in 2018 to accommodate larger numbers of early and mailed ballots, will largely remain the same, said AP’s deputy managing editor David Scott.

The NewsHour and many other major news outlets use the AP’s data and race calls in their election coverage.

How does AP prepare for Election Day?

AP’s election research team gets to work months before Election Day collecting data on state voting history and trends, demographics, state election laws, as well as rules on when counties can begin processing mailed ballots. That information is passed on to AP’s analysts and race callers who work together to study all the information in preparation for the big day.

This year will be the first time AP uses its new voter survey system, VoteCast, for a presidential election. Traditionally, AP has relied on exit polls — in-person interviews with voters as they leave their polling locations — which have played a key role in calling races by assessing how people are voting on Election Day.

But even before the pandemic, a growing number of people around the country were casting their ballots by mail or early. Data from the U.S. Election Assistance Commission indicates that the total number of voters who either voted early or by mail grew from 24.9 million in 2004 to 57.2 million in 2016, an increase from 20 percent of all ballots cast to 40 percent of the total vote.

This trend made exit polling a less effective method of examining voter behavior, Scott said. So AP collaborated with the National Opinion Research Center at the University of Chicago to develop VoteCast.

“We wanted something new that would be more tailored to an electorate that was increasingly voting in advance, and so we came up with a new way to survey the electorate,” Scott said. “A highly accurate survey to deliver highly accurate results, regardless of the way in which people cast their ballot.”

PODCAST: Why voter suppression continues and how the pandemic has made it worse

The system contacts registered voters randomly selected from every state’s voter files and questions them either by phone or online in English or Spanish. It also uses data from self-identified registered voters who participate in online panels. To ensure their samples accurately reflect the U.S. electorate, AP uses a weighting and calibration process to make sure every demographic group is represented. VoteCast includes opinions about the presidential election in all 50 states, as well as every gubernatorial race and elections for U.S. House and Senate. From Oct. 28 through Nov. 3, AP expects to complete about 140,000 interviews.

AP’s decision desk uses VoteCast data along with actual vote counts and the months of research to determine winners and call races. When AP first used VoteCast in the 2018 midterms, AP said they were able to accurately determine the outcome of races within 2 percentage points of the final published results.

But race calls are projections, meaning the AP is using its data to forecast what the outcome will be before all the votes are counted, and thus there is a margin for error. In 2018, AP mistakenly projected Republican David Valadao had won California 21st Congressional District seat. But thousands of mail-in and other ballots counted in the days after the election ultimately gave the victory to Valadao’s Democratic opponent, T.J. Cox, with a 529-vote margin. AP had to retract its initial call. Despite the error, AP was 99.6 percent accurate in calling U.S. races in 2018, said Lauren Easton, AP’s global director of media relations. 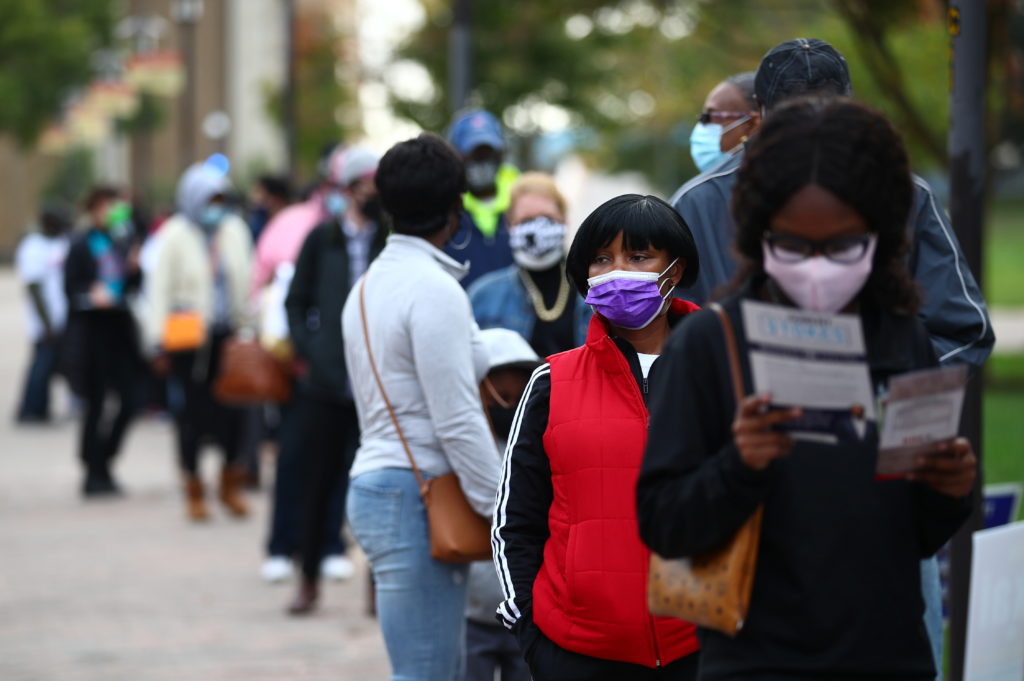 People line up outside a polling station located in the Morgan State University in Baltimore, during early voting in Maryland, U.S., October 26, 2020. REUTERS/Hannah McKay

On Election Day, AP will have a team of about 4,000 people known as election stringers dispersed around the country to collect vote counts from county clerks and relay the information by phone to vote-entry clerks who put the information into AP’s vote tabulation system. In prior years, these clerks worked from large vote-entry centers where they took the calls from stringers. This year the process will be completely virtual, which AP started doing for all primary races after March 17, AP’s Director of Elections Brian Scanlon said.

AP’s decision desk has about 60 analysts, race callers and editors who monitor the data as it comes in. As vote counts are reported by states, the decision desk considers the vote tally as well as the types of ballots voters are casting, whether in-person or by mail, alongside the data the team has gathered from VoteCast and other research.

Democratic candidates are more likely than Republicans to make late gains in an election as the final results are tallied — what’s known as the “blue shift” phenomenon. It’s important to remember that early vote counts can paint a very different picture from what the eventual result will be as certain groups of people lean toward a particular voting option.

The Brennan Center for Justice, a bipartisan law and public policy institute, analyzed 2016 data from seven battleground states where any voter could choose to vote by mail: Arizona, Florida, Georgia, Minnesota, North Carolina, Ohio and Wisconsin. It found that white voters and voters over the age of 65 were more likely to cast ballots by mail in those states.

READ MORE: In a year of uncertainty, voters’ fears of not being counted prompt record early turnout

A recent PBS NewsHour/NPR/Marist poll found that 42 percent of Democrats said they plan to vote by mail, along with 34 percent of independents and 19 percent of Republicans. Other reports and polling indicate that many non-white voters trust in-person voting more than mail-in options.

This year amid the pandemic has seen a bigger push for all voters to take advantage of mail voting, but the inconsistency of state requirements for submitting ballots has created confusion and hurdles for voters who don’t have regular access to transportation or mail.

In the end, AP won’t know specific demographic information from the vote count, but the decision team consults its body of research and will only call a race when it determines that the trailing candidate cannot catch up to the leader. The team will monitor top races continuously until they are called, Easton said.

“It’s all part of a collaborative approach,” Scott said. “For first statewide races and the presidency in particular, no one person at AP can call a race. We’ve got to convince each other that it’s ready and we all need to agree.”

What results can voters expect on election night?

Scott would not make a prediction about the timing of election results, but said the competitiveness of a race is one of the biggest determinants of how quickly the race will be called. “If the race is very closely contested, it’s going to take some time. We need to count deep into the vote count to be able to call states,” he said.

In races that aren’t closely contested, often AP will be able to call the winner as soon as the state’s polls close and the initial vote count is reported. If a state has a long history of favoring a particular party or candidate, AP factors in that history with the VoteCast data to determine a winner quickly.

AP may decline to call a win or list a race as “too close to call” if a vote tabulation has reached a conclusion without a clear winner, such as if the margin between the top two candidates is less than 0.5 percentage points. The “too close” designation is different from a race that is actively being assessed after Nov. 3. In such cases, the AP will wait for the state to certify a winner.

This year the influx of absentee and mail-in ballots will take more time not because of counting the votes, but mainly because of processing the ballots, Scott said. “An envelope has to be opened. A signature needs to be verified. Things that take place very efficiently when you check into your polling place on Election Day just take a little bit longer when you’re doing it absentee or by mail,” Scott said.

The Washington Post determined that primary races held in 23 states after March 17, when the country began to shut down amid the pandemic, took an average of four days to report “nearly complete results.” Several close races in New York took more than a month to determine a winner.

The battleground states of Pennsylvania, Wisconsin and Georgia were among the slowest to report nearly complete results during the primaries, taking more than six days according to the Post’s analysis.

“In the 2016 presidential election, AP named Donald Trump the winner at 2:29 the morning after Election Day,” AP’s Executive Editor Sally Buzbee wrote in a column. “In 2004, AP did not call the presidency for George W. Bush until 11:07 a.m. ET, again the day after Election Day. And in 2000, AP stood alone when it assessed the race between Bush and Al Gore and decided it was too close to call.”

A delayed call does not indicate fraud or disaster, Buzbee continued, but rather that the organization is taking time to make tabulations.

“We certainly want to tell the American people — and the world — who has won the presidency as soon as possible,” she said. “But accuracy comes first.”

Left: An election official collects mail-in ballots after they have completed a process that verifies each voter?s signature on the outside of the envelope with the one on file at the Denver Election Division for the upcoming presidential election in Colorado, U.S., October 22, 2020. REUTERS/Kevin Mohatt