A new hearing, Ginni Thomas, a final report. What’s next for the Jan. 6 committee

Editor’s note: After initially postponing the hearing as Hurricane Ian made landfall in Florida, the panel will return to its public-facing work this week – less than a month before the midterm elections.

The House Jan. 6 committee is returning to its public-facing work this week, building on their summer series of hearings into the U.S. Capitol insurrection. As fall begins, this Congress has just over three months left. Once this session ends, the Jan. 6 panel will as well.

The next step is a public hearing scheduled for Oct. 13. Whether there are more hearings or exactly when we’ll see a written report is less clear. The select committee, made up of seven Democrats and two Republicans who have been appointed by Democratic Speaker Nancy Pelosi, will release a final report after hearings have concluded. It must then disband 30 days after issuing that report, per its own rules.

Here’s a short guide to what may be in the committee’s sights for the rest of the year.

How to watch the next Jan. 6 hearing

Watch the upcoming Jan. 6 hearing in the player above.

The PBS NewsHour’s digital coverage will begin at 11:15 a.m. EDT with a look back at key moments from the eight public hearings held over the summer and a look ahead to the next. Check your local listings to find the PBS station near you, or watch online here or in the player below.

As of publication time, details around this hearing are scant – and the committee has yet to announce a theme to the proceedings – but Thompson has signaled that this could be the last public hearing the panel holds.

“I can say that, unless something else develops, this hearing, at this point, is the final hearing, but it’s not in stone because things happen,” Thompson told reporters last week.

However, as the chairman noted, things can change. Look back to as recently as three months ago, when the panel added a surprise hearing to its docket this summer after more information came to light.

For a recap of the committee’s work, thus far, here’s a video that highlights the key moments from each of the eight hearings from this summer.

What does the Jan. 6 committee want to achieve in these last months? 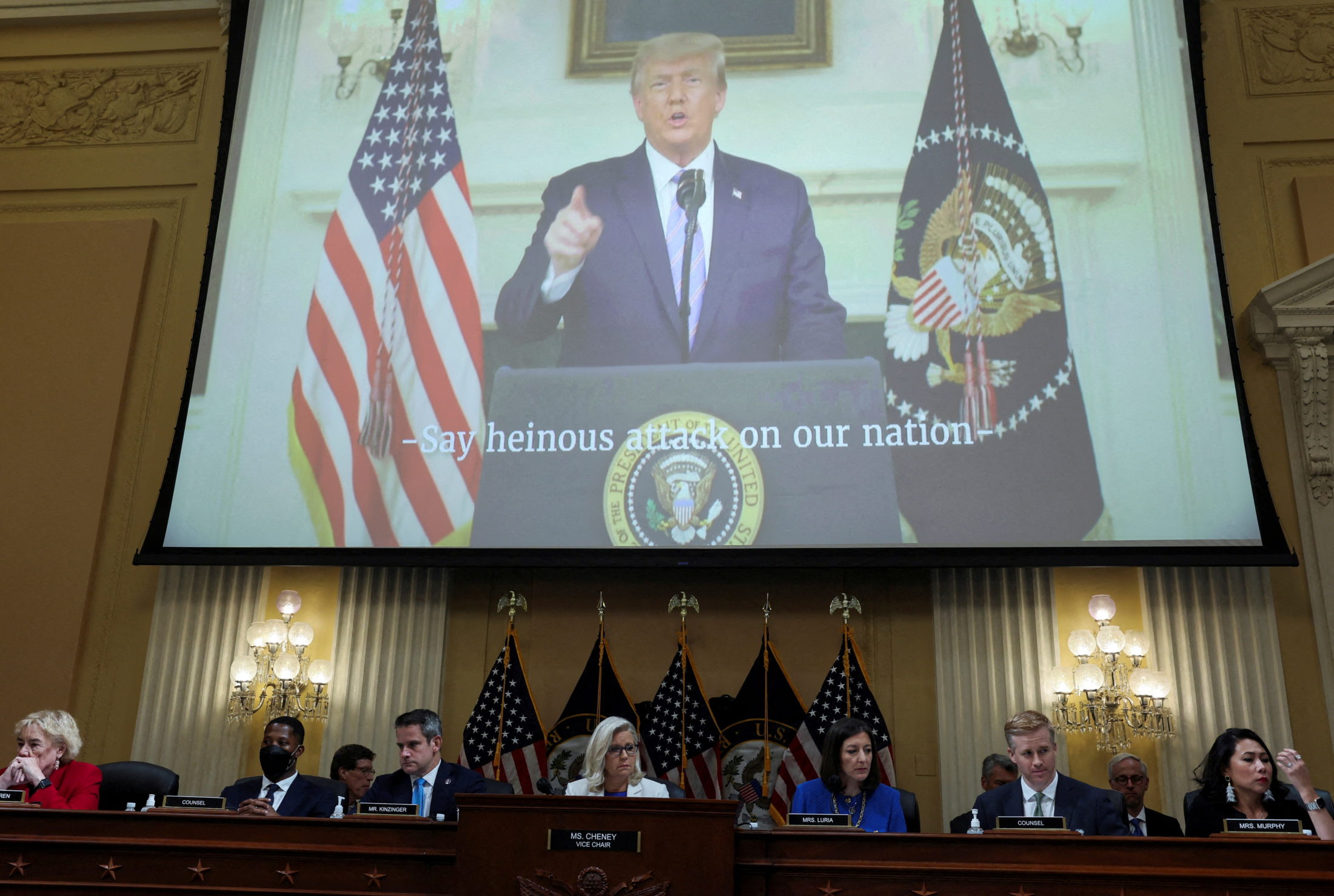 A never-before-seen video of former President Donald Trump rehearsing a speech, where he refused to admit a day after the Jan. 6 assault on the U.S. Capitol that the 2020 election was over and that he had lost. The moment was played during one of the Jan. 6 committee’s public hearings into the Capitol attack. Photo by Evelyn Hockstein/Reuters

At the end of eight public hearings this summer, the committee had illustrated several aspects of its investigation – former President Donald Trump’s bid to stay in power after losing the 2020 election and his inaction when it became clear there could be violence; how several of his aides accepted the election results as legitimate while others pursued questionable strategies to overturn the outcome; and the ways that election workers and defenders of the Capitol have faced harassment and other painful consequences in the aftermath.

Some of the hearings’ standout moments have come from members of Trump’s inner circle, including family members, appearing both in snippets of recorded testimony. 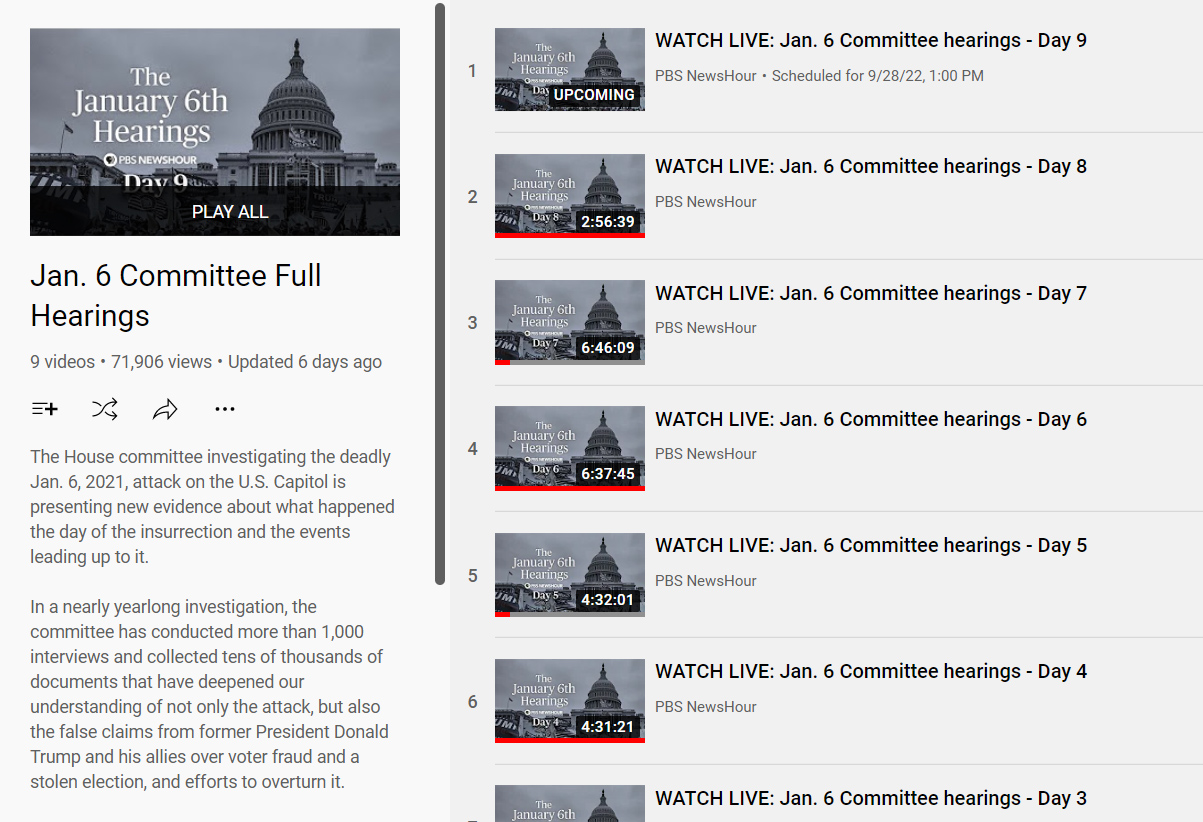 The House committee investigating the deadly Jan. 6, 2021, attack on the U.S. Capitol has been presenting its findings about what happened the day of the insurrection and the events leading up to it.

Former Attorney General William Barr, in recorded testimony, said Trump was “detached from reality” and that he didn’t believe the former president’s claims of voter fraud. Daughter Ivanka Trump, a one-time adviser, testified that she “accepted” what Barr said about the election not being stolen. Jeffrey Rosen, Trump’s acting attorney general in the lead-up to the Capitol insurrection, testified that Trump wanted the Department of Justice to seize voting machines. Multiple former administration officials described how Trump didn’t act when a violent mob of his supporters attacked the Capitol building.

The Capitol attack, Thompson said at the June 9 hearing, was a “culmination of an attempted coup,” and the panel’s narrative thus far has charged that Trump was central to a deliberate effort to subvert democracy.

Going forward, here’s what the Jan. 6 committee may turn to next.

Virginia Thomas agrees to an interview.

To date, the Jan. 6 committee has interviewed at least 1,000 witnesses, including Trump’s former Cabinet secretaries. One of the latest names on the committee’s list to provide testimony is Virginia “Ginni” Thomas, wife of Supreme Court Justice Clarence Thomas.

Reporting led by The Washington Post found that Virginia Thomas, a noted Trump supporter, sent 21 text messages to then-White House chief of staff Mark Meadows, advocating for efforts to overturn the 2020 election, among other revelations.

In late September, her lawyer confirmed that the conservative activist fielded questions from the Jan. 6 panel. She testified for several hours behind closed doors. It’s not immediately clear how Thomas’ testimony will be used in the upcoming hearing.

What about Trump or Pence? Will the panel pursue testimony from them?

The committee has not indicated that it will try to call former President Trump as a witness, something that would be unprecedented and potentially pose legal challenges.

His vice president is a different matter – though the outcome might be the same.

Committee vice chairman Rep. Liz Cheney, R-Wyo., confirmed in April that there had been discussions with Pence’s legal staff about possible testimony after Pence indicated he was open to the idea.

However, Pence apparently had a “change of heart,” committee member Rep. Zoe Lofgren, D-Calif., told the NewsHour this weekend, and the committee does not have time for a court battle to try to force his testimony.

When will the final report be released?

The latest the committee could release its final report is sometime in December. The overriding expectation is that if Republicans take over the House in November’s midterms – a likely prospect – that they will not continue the work of the current committee.

NPR’s Tamara Keith and Amy Walter of the Cook Political Report with Amy Walter join Judy Woodruff to discuss the latest political news, including the upcoming January 6 Committee hearing and its impact on the midterms.

More on the Jan. 6 investigation from our coverage:

Rep. Zoe Lofgren on what to expect in this week’s Jan. 6 hearing