How new Gen Z voters could shape the election

Early voting in the 2020 election has reached record turnout in key battleground states like Georgia and Florida, and one group helping to drive that initial surge is young voters. Of the 50 million votes cast by October 25, nearly 5 million of those were by people between the ages of 18 and 29, according to TargetSmart, a Democratic political data firm. About 1.7 million ballots had been cast by voters under the age of 30 at the same point in the 2016 election.

More voting-age members of Generation Z, those 18 to 23 years old, are eligible to vote this time around, and have emerged as a key group to watch, according to political scientists.

Matto said that these young voters are not only interested in politics, but engaged. “It is a generation that cares about public problems, wants to solve public problems, and most importantly, sees politics or the use of political institutions as a way to solve those problems.”

“I just think we are more, like, ideological, and we agree that certain things are important issues, regardless of your partisan identity.”

That political action has included launching nationwide movements to address climate change and gun violence, rallying behind candidates who are political newcomers or raising money to help vulnerable members of their communities.

“It seemed to be that youth has always felt like they had a voice to be heard. But I think now it seems like they have an agency about it and that they do recognize their impact,” said Rey Junco, a senior researcher at the Center for Information Research on Civic Learning and Engagement (CIRCLE).

Interviews with Gen Z voters in the weeks leading up to Election Day painted a portrait of how those qualities stand to shape the presidential and down-ballot races this year.

“Young voters aren’t as partisan,” said Ian Stevens, a 22-year-old Republican who is voting for Joe Biden. “I just think we are more, like, ideological, and we agree that certain things are important issues, regardless of your partisan identity.”

Researchers expect overall turnout to be higher for voters between 18 and 23 years old this year than previous years, said Melissa Deckman, a political science professor at Washington College, who is writing a book about Gen Z, gender and political engagement. Much of the available data on young voters does not make a distinction between millennials and Gen Z, since the latter group is just reaching voting age. But one indicator experts like Deckman are looking at is turnout in the 2018 midterm elections, which rose among people ages 18 to 29 in every state compared to 2014, and increased by at least 10 percent in 31 states, according to CIRCLE. Additionally, this year’s voter registration for people 18 to 24 years old is higher than in 2016.

Despite the boost in early voting turnout, a number of Gen Zers say they have struggled with the choice between former Vice President Joe Biden and President Donald Trump, neither of whom perfectly reflect their mix of values.

Adrienne Livingston, 22, said she can’t morally bring herself to vote for Biden or Trump.

Livingston is a Republican in North Carolina, but noted that one of her criticisms of Trump is his approach to immigration.

“I don’t agree with the border wall. Immigration, I think, is a very sensitive and a very important issue,” Livingston said. “I don’t think that sends the right message to immigrants, especially since we’re a nation founded on immigrants.”

Her criticism of Biden includes his role authoring the 1994 Violent Crime Control and Law Enforcement Act frequently criticized for establishing minimum sentences that increased incarceration. Livingston also criticized Biden’s delayed support for same-sex marriages, which as a senator in 1996 he voted against recognizing, but publicly endorsed in 2012 as vice president.

Deana Ayers, 22, a self-identified democratic socialist living and organizing in Minnesota, fears the possibility of Trump winning a second term.

“It’s just been getting more and more scary seeing who is empowered by him, especially this summer seeing white supremacists,” Ayers said. “Before, I guess it didn’t really set in, like, the reality of what [Trump] being reelected meant for me on the ground.”

Ayers, who is gender non-binary and uses “they” and “them” as pronouns, credits Trump with their “political coming of age.”

“This presidency has opened my eyes to, like, how much could have changed if we had a different candidate,” Ayers said.

“It’s like, wow, this person is making these decisions very loudly and it’s like, what can you do but organize?” they added.

But Ayers doesn’t plan to vote for Biden, either. When their preferred candidates in the Democratic primary — Sen. Elizabeth Warren, D-Mass., and Sen. Bernie Sanders, I-Vt. — ended their presidential campaigns, Ayers was disappointed to see them stand behind Biden when their political views differ so much from Biden’s more moderate positions.

“It’s kind of like a lost cause. I’m like, wow, this is disgusting how this turned out,” Ayers said of Biden’s nomination as the Democratic presidential candidate. “It is really terrible that this is where we’re at.”

Ayers expressed concern about Biden and Harris’ previous actions on criminal justice. Among Ayers’ complaints were Biden’s involvement in the 1994 crime bill and Harris’ championing of a state law that punished parents of habitually truant schoolchildren when she was California attorney general. 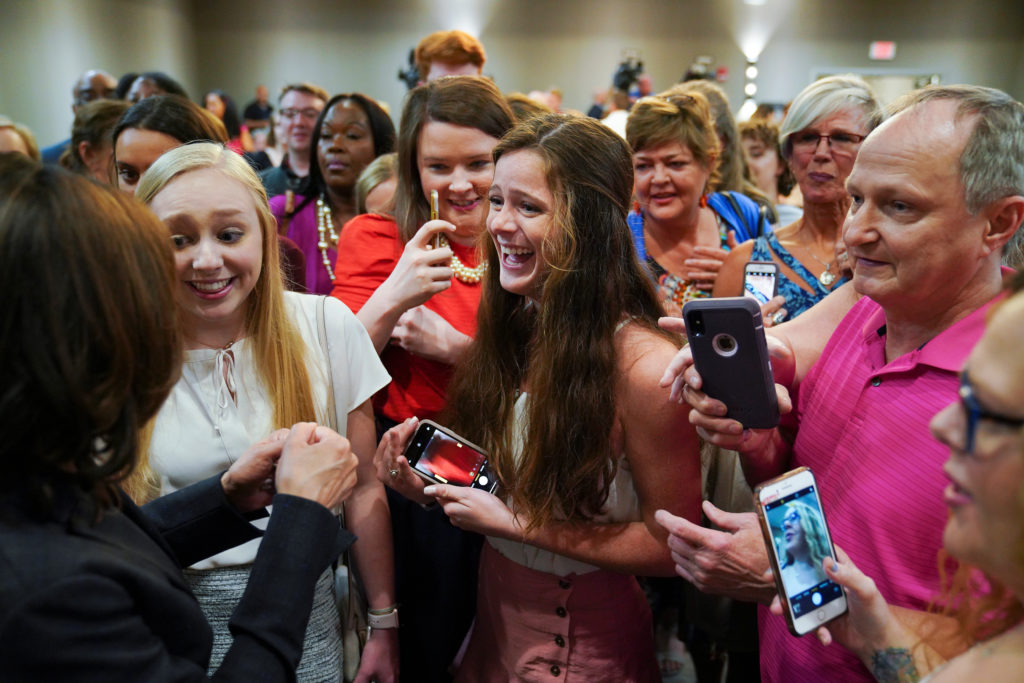 Neither Livingston nor Ayers will be voting in the presidential election, but each plans to vote in down-ballot races. Their positions reflect the way many Gen Zers don’t fit neatly within either major party, and how some are unwilling to compromise on key issues.

Overall, early data does not yet show huge differences between young voters’ party affiliations and those of the general population, but it does suggest a shift toward the left.

For the presidential election, a Politico/Morning Consult poll last month found that 51 percent of Gen Z voters plan to support Biden and 25 percent plan to support Trump. However, 45 percent of the Biden supporters said they were mainly voting that way to oppose Trump rather than to champion their candidate.

Climate change, health care access and economic opportunity are among the top issues for Gen Z, and many positions that are relegated to the left among older generations also resonate with Gen Z Republicans.

READ MORE: How more Black candidates could win in white districts this year

Stevens who lives in North Carolina, said the Republican Party’s current leaders are “giving progressives a monopoly on the discourse” on things like health care and climate change by not seriously addressing the issues.

“Republicans are still not willing to say climate change is an issue,” he said. “I think these are the issues that young voters care about and that we want both sides to talk about, but only one side is talking about them.”

Stevens said he would be supporting down-ballot Republicans, but not Trump, casting his ballot instead for Biden, who has an aggressive climate plan that includes rejoining the Paris climate accord and eliminating carbon emissions from the electric sector by 2035.

Looking to the future of the country, Gen Zers stressed the importance of the 2020 elections, but shared mixed feelings about whether the presidential election will have the effect they’re hoping for, even if their preferred candidate wins.

“It’s going to be an important election simply because of what’s at stake,” said Joseph Murray, 19, a Republican living in Arizona who is voting for Trump. “However, it’s going to be hard to truly know the far-reaching impacts of it until we see how the parties rebound after this election.”

Malavika Kannan, 19, an activist currently organizing in Minnesota but registered to vote in Florida, said that she plans to vote for Biden and Harris, but has become much more interested in exploring how communities can organize to exchange resources and provide for themselves as a way to circumvent government inaction.

“I kind of feel like we have more power to take care of each other and fulfill each other’s basic needs,” Kannan said. “That gives us a much greater sense of agency in improving our lives than voting for like a couple of dudes in the government and hoping that that will change things.”

Left: A young voter fills out a ballot with assistance from a poll worker at a polling station at the Midtown Center shopping mall in Milwaukee, on the first day of in-person voting in Wisconsin, U.S., October 20, 2020. REUTERS/Bing Guan