Kansas will be the first state to vote on abortion rights after Roe ruling. Here’s what that means

As patients evaluate their abortion options after the Supreme Court decision to overturn Roe v. Wade, Kansas has become a critical point of health care access for neighboring states.

It will also be the first state to put voters’ views on the issue to the test. Kansas is preparing for an Aug. 2 vote on an amendment that would alter the state constitution to say it does not guarantee a right to abortions, opening the door to pass restrictions or ban them altogether. Early voting begins July 13.

Abortion access in Kansas, which allows for abortions up to 22 weeks of pregnancy, is currently protected by a state Supreme Court ruling from 2019 that determined the Kansas Bill of Rights “protects a woman’s right to decide whether to continue a pregnancy.”

WATCH: The End of Roe: A PBS NewsHour Special Report

A “yes” vote on the ballot measure, called the “Value Them Both” amendment by supporters, would amend the Kansas Constitution to declare the document does not grant a right to abortion nor that it requires government funding for abortion. The state legislature, controlled by Republicans, would also be granted authority to pass laws regarding abortion.

“The idea that working families may have their hard-earned tax dollars used for abortion is unconscionable,” said Republican Kansas Sen. Molly Baumgardner. “Value Them Both sets a positive vision for Kansas, not the dark outlook of an unlimited abortion industry.”

Kansas Gov. Laura Kelly, a Democrat, has said she opposes “regressive legislation that interferes with individual freedoms.” But has not spoken directly about the amendment vote.

Even if Kelly opposed the amendment, Republicans in the state legislature could still ban or restrict abortion as long as they retain their veto-proof supermajorities in both chambers of the legislature.

Kelly is also up for reelection and is expected to face Republican candidate state Attorney General Derek Schmidt, who praised the high court’s Roe ruling.

That prospect worries health care providers who are not only trying to care for people in state, but for those from Oklahoma, Arkansas and Missouri, which have banned abortions, and Texas, which is expected to build on its six-week ban with a total ban soon.

“The constitutional amendment on the Kansas ballot will mandate government control over our private medical decisions and pave the way for a total ban on abortion — with no exception for rape, incest or to save the mother’s life,” said Ashley All, a spokesperson for Kansans for Constitutional Freedom, a bi-partisan group of reproductive rights advocates.

The phones inside a Planned Parenthood clinic in Overland Park, Kansas, have not stopped ringing since the high court’s decision came down last week.

“I’m grieving for all the pregnant people who can’t access care,” said Dr. Iman Alsaden, medical director for Planned Parenthood Great Plains, which oversees the Overland Park clinic. “There’s these extremes of people driving 12 hours in the middle of the night to get an abortion. But, there’s also people that just live here and need abortions too.”

Roughly 60 percent of the clinic’s patients are out of state, he said, adding that most are from Oklahoma, where Republican Gov. Kevin Stitt signed a law in May that outlawed abortion beginning at fertilization, the first state to completely ban abortion in the country.

The clinic has brought on additional doctors and staff, while also increasing hours and days open, but they are still not able to meet demand.

“You can’t add any more hours into these days,” he said. “We are definitely turning away far more people than we’re able to see.”

Democrat Sen. Dinah Sykes, Kansas’ House minority leader, said she’s been knocking on doors in her Overland Park district since the end of legislative session in May to talk to constituents about the importance of the upcoming vote. 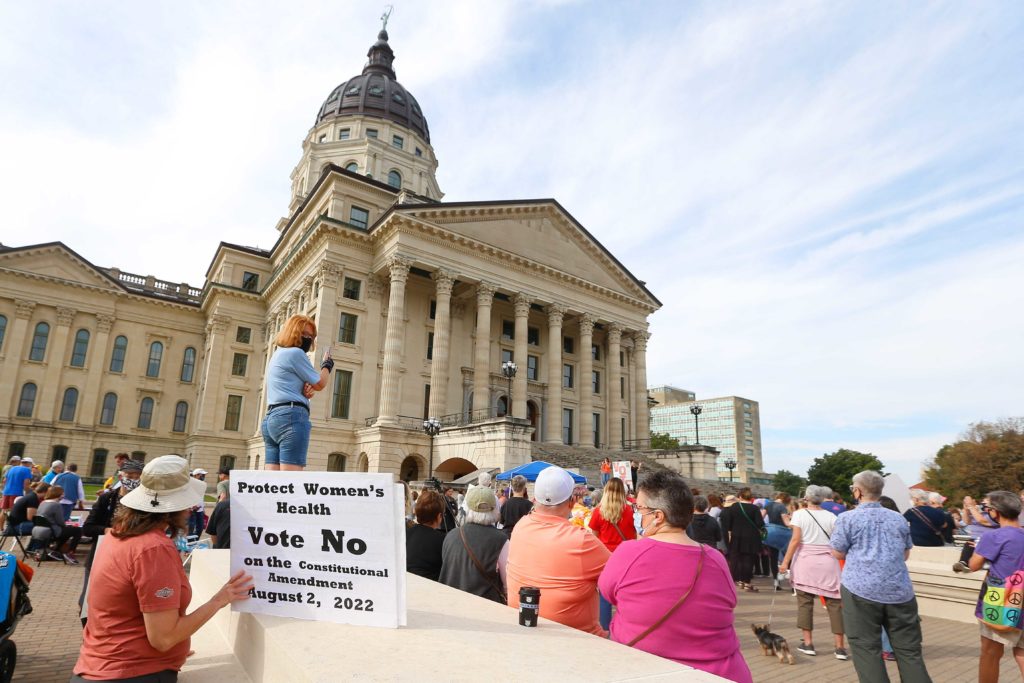 A women holds a sign asking voters to vote no on an upcoming amendment to the Kansas Constitution regarding abortion during the National Women’s March on Oct. 2. Photo by Evert Nelson/The Capital-Journal / USA TODAY NETWORK

A 2021 survey from the Kansas Speaks Survey, conducted by the Docking Institute of Public Affairs at Fort Hays State University, found that 60 percent of the 523 respondents polled said they disagreed or strongly disagreed with the idea of banning abortion in all cases. And roughly 50 percent of those surveyed said they agree or strongly agree with the notion that state lawmakers shouldn’t place any regulations on when a person can get an abortion.

Sykes often points to surrounding states that have banned abortion and described how those people in need of care are now traveling to Kansas for that help.

“With Missouri changing overnight and Oklahoma and Texas, we see the need for access,” Sykes said. “We have the ability to do this, whether that’s helping provide access, care or a place to stay, Kansas is here for you.”

Proponents of changing the Kansas Constitution say the issue is not about banning abortion, but a chance to discuss limitations on the procedure.

“Trust in your fellow Kansans, use your voice, persuade people to your way of thinking,” said Michael Kuckelman, chairman of the Kansas Republican Party. “But let’s not ask the government to decide everything for us because we’re afraid if we let ourselves decide. We’ll get it wrong.”

Sykes has been pushing back against that narrative and trying to educate her constituents on exactly what they are voting for.

“The language is just very confusing and that’s exactly what the people who brought the amendment were trying for,” Sykes said. “I think they are trying to be very quiet about it, but they are trying to mislead and say this is just about regulating, and we know that in past legislation that the end goal is a complete ban.”

When early voting begins in two weeks, independent voters, who are normally not able to vote in primary elections, will be able to vote on the Value Them Both Amendment.

Johnson County Election Commissioner Fred Sherman said his office has seen more than 1,000 email requests for advance mail ballots and new voter registration since the Supreme Court decision. Sherman told the Shawnee Mission Post Newspaper he expects the number of registered voters to top 450,000 by the end of June.

“In the grand scheme of Roe v. Wade, I think it’s interesting that Kansas is the first to take a public vote on this issue,” Sykes said. “We will hear what the people have to say.”

Left: Abortion-rights supporters hold signs related to a bill that could open the door to legislation limiting or banning abortions in the state during a rally Friday at the Kansas Statehouse following the U.S. Supreme Court's decision to overturn Roe v. Wade. Photo by Evert Nelson/The Capital-Journal / USA TODAY NETWORK

How Americans are responding to the Supreme Court ruling overturning Roe v. Wade