‘Optics matter.’ National Guard deployments amid unrest have a long and controversial history

When major protests erupted in dozens of cities around the country in the wake of George Floyd’s death, many states responded by calling on the National Guard to police demonstrations and to enforce curfews.

In all, more than 30 states activated about 32,000 National Guard members to supplement local police efforts to manage the unrest, which was largely lawful, but in some cases resulted in the destruction of businesses and instances of violence.

A number of high profile clashes between law enforcement and protesters have prompted criticism about what many have decried as excessive use of force — the very issue that gave rise to the demonstrations.

For decades, the guard has served the dual function of operating both domestically, in a number of capacities, and internationally. For instance, about 60,000 additional guard members are assisting this year with public safety efforts amid the coronavirus pandemic and natural disaster preparation and response as tropical storm season gets underway. But in light of recent confrontations, many are questioning the wisdom of using trained military to monitor American civilians protesting on American soil.

What is the National Guard?

The National Guard is a reserve military force that is part of the U.S. Army and Air Force. The guard consists of about 450,000 members who typically hold full-time civilian jobs and commit part-time to training and assisting when called upon with overseas missions or domestic emergencies ranging from natural disasters to civil unrest.

At the state level, training specifics will vary depending on a state’s needs. Kentucky National Guard members, for example, primarily focus on disaster response, said Maj. Stephen Martin, a spokesperson for the Kentucky National Guard. In 2009, during a severe ice storm, the Kentucky governor mobilized all of the state’s guard troops to help clear roads and deliver supplies to residents, among other duties.

“These statutes give the president very broad discretion in terms of when the military is necessary and what the military might do.”

In addition to disaster relief, governors and the president can use National Guard members to address instances of civil disturbance, but this authority is limited.

When can the National Guard be mobilized?

Governors typically act as the commander-in-chief of their state’s National Guard and can mobilize members at a cost to the state, based on parameters established by each state’s laws.

Cities and counties can request National Guard aid from the state after exhausting local resources on addressing a particular issue, said Timothy MacArthur, a clinical professor and director of the Mason Veterans and Servicemembers Legal Clinic at George Mason University. A governor can also identify that need and call up guard troops, he added.

The president of the United States most commonly “federalizes” the National Guard for military action abroad. Reserve forces, including the guard, have made up about 45 percent of the personnel deployed to fight in Iraq and Afghanistan since 2001. However, federal use of military units for domestic purposes are historically limited.

The Posse Comitatus Act bars federal military personnel from domestic law enforcement, unless authorized by Congress. But the president can circumvent these restrictions by invoking the Insurrection Act, which allows the use of active U.S. military or federalized National Guard members to suppress a civil disorder, insurrection or rebellion.

One provision of that act allows states to request that the president federalize the guard to enforce state law, but no states have made that request amid the recent unrest.

READ MORE: Two-thirds of black Americans don’t trust the police to treat them equally. Most white Americans do.

But MacArthur noted that the president would first need to issue a proclamation ordering that the disruptive activity cease. “We’re talking about [people] trying to actively resist the government’s authority or overthrow the government,” MacArthur said. From what he has seen of the protests, MacArthur said they are “mostly peaceful” and do not in his opinion require a heavy National Guard presence.

However, the president has broader authority to use federal force in Washington, D.C. Amid the recent protests, President Donald Trump deployed about 5,000 National Guard personnel, including Maj. Hagemeier, from other states to the nation’s capital. Trump first threatened federal military action after instances of arson and looting amid other lawful protests around the country.

“If a city or state refuses to take the actions necessary to defend the life and property of their residents, then I will deploy the United States military and quickly solve the problem for them,” Trump said last week. But on Sunday, Trump tweeted that he would be withdrawing National Guard troops from Washington in the coming days. 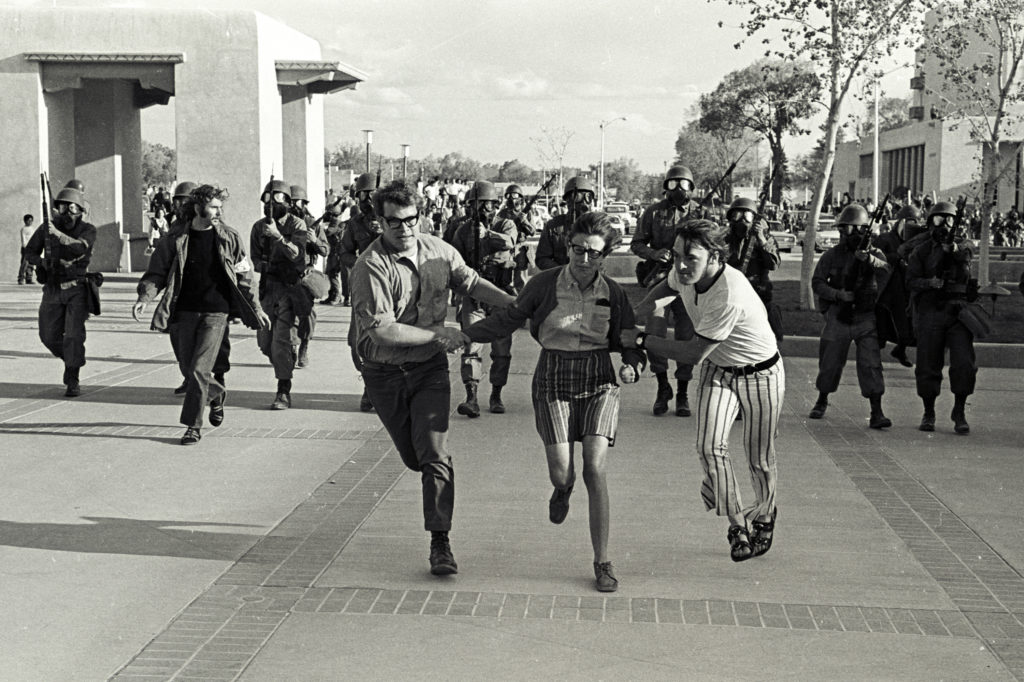 Following the May 4, 1970 shooting of students at Kent State University students at UNM took over the student union building. After several days of the occupation the National Guard were called upon to clear the students from the building. (Photo by Steven Clevenger/Corbis via Getty Images)

How the National Guard is deployed in times of civil unrest

A governor can call on the National Guard for a variety of law enforcement duties, such as monitoring large-scale events like the Kentucky Derby, Maj. Martin said.

During protests, National Guard members do not have arresting authority but work with police to maintain peaceful assembly, both Martin and Hagemeier added. They can be equipped with tasers, pepper spray and batons. But their primary objective is to protect “life and property,” Hagemeier said, adding that guard members can be well positioned to work with the public as they are residents of the states where they are mobilized.

The National Guard is trained to help domestically in a variety of capacities, said William Banks, a professor emeritus at Syracuse University College of Law. “That said, they are members of the military, not law enforcement, so they are largely trained to supplement military jobs,” Banks said.

During the civil rights era of the 1960s, governors mobilized the National Guard to control uprisings, including in Hunter’s Point in San Francisco and the Hough Riots in Cleveland. In 1970, Ohio National Guardsman killed four students protesting the Vietnam War at Kent State University. More recently, states have used the National Guard in response to unrest in the aftermath of other police killings — in Ferguson in 2014 when Michael Brown was shot and killed by police and in Baltimore in 2015 after Freddie Gray’s death in police custody.

Since the 1950s, the federal government has only used the National Guard to address civil disturbances 12 times, the majority of which took place during the civil rights movement, including President Dwight Eisenhower sending troops to Little Rock, Ark., to maintain order during protests against school desegregation. The most recent use of the Insurrection Act took place in 1992 amid unrest following the not-guilty verdicts for Los Angeles police officers charged with beating Rodney King.

The recent widespread state mobilizations of National Guard troops are noteworthy because of the sheer number of deployments, experts tell the PBS NewsHour. When examining appropriate use of military personnel in domestic affairs, experts said the president and governors need to assess how a military presence can either aid or strain an already tense situation.

“There’s a civilian-military divide that I think definitely needs to be considered when making these decisions,” MacArthur said. “What is this going to look like for someone who is not very familiar with the military? Optics matter.”