Outside spending eclipses all past midterms

The Outsiders: Back in April, we wrote that outside spending was on a record-breaking pace. Well, on this first day of fall — and with 43 days still to go until Election Day — outside spending has now surpassed the mark for most money ever spent in a midterm election. In fact, the $228 million (and climbing) spent by outside interest groups is not only the most ever spent in a midterm, but it’s also more spent in any election except the 2012 presidential election, according to Federal Election Commission data compiled by the Center for Responsive Politics. The fact is: this is a whole new world. There should be a red line drawn on anyone’s timeline when reporting on election spending to signify Jan. 21, 2010, the date the Citizens United Supreme Court ruling was handed down, opening up unlimited money to flow into elections from unions and corporations.

Outside spending in federal campaigns 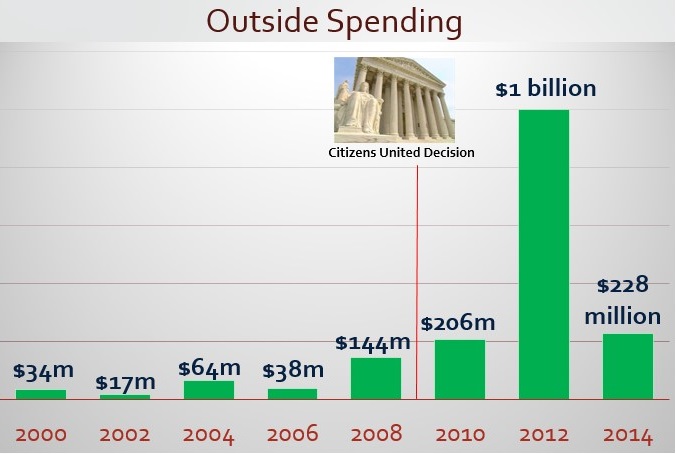 So, where’s the money being spent? Carolina on my mind…:

Most of that money is being funneled into key Senate races that will determine control of the U.S. Senate. Now that we’re past primary season, let’s take a look at general-election outside spending. The most, by far, has been in North Carolina — $22 million. Incumbent Kay Hagan, a Democrat, has a small lead in most public polls, and pro-Democratic groups have actually outspent Republicans about $13 million to $8 million. How important is North Carolina? It could be the Rosetta Stone on election night. Its early poll closing time — (7:30 pm ET) — and the fact that Hagan is holding up better than the other red-state Democrats so far — will tell us a lot about which direction control of the Senate is headed on Election Night. No. 2 on the list — Iowa, where pro-Democratic groups are outspending Republicans, hoping to paint Republican Joni Ernst as too extreme for the state Barack Obama won twice. Nos. 3 and 4 are Kentucky, where Republicans are doing all they can to give Mitch McConnell the best shot at becoming majority leader, and Colorado. Notice three of the top four — North Carolina, Iowa, and Colorado — are the states that make up the Democratic “firewall.” Democrats believe if they hold those three, they hold the Senate.

Wild West: By the way, wonder where the most contentious House races are? Look no further than Arizona. There’s been more outside money already spent in the race for Gabrielle Giffords’ seat — Arizona’s 2nd congressional district ($2.9 million) — than the Louisiana Senate race general election so far ($2.7 million). Coming up just behind that is the very competitive Arizona 1st district race, where $2.5 million has been spent. Speaking of Giffords, Politico spotlights how Giffords and her group have been running very tough ads against anti-gun control candidates, including for her old seat.

Obama to UN: In only the second time that a U.S. president has headed a United Nations Security Council session, President Obama will preside before about a dozen heads of state Wednesday to push a binding resolution that would urge member states to prosecute those who travel abroad to join foreign terrorist groups. The American proposal, which is expected to pass, compels states to adopt domestic laws for the prosecution of foreign fighters and for the first time sets up international standards for states to stop foreign terrorist organizations from recruiting their citizens or moving fighters through their territory. Of course, with any U.N resolution, even a legally binding one, comes the problem of enforcement. The draft resolution also does not define what a terrorist organization is, a likely source of disagreement among states. The resolution cites the Islamic State as an example, underscoring the importance to Mr. Obama of taking a lead against foreign fighters, who number 15,000 in Iraq and Syria, according to American intelligence officials.

Secret Service under scrutiny again: After a man with a knife jumped the fence to White House grounds Friday and made it all the way into the front door unimpeded, the Secret Service is investigating its protocols, what went wrong and how to prevent it in the future. The New York Times reports, “The Secret Service is considering screening tourists and other visitors at checkpoints before they enter the public areas in front of the White House….” The Washington Post: “Secret Service is weighing a series of measures that would move tourists and D.C. residents farther away from the complex to reduce the chances of intruders piercing its security perimeter and endangering the president. One proposal is to keep people off the sidewalks around the White House fence and create several yards of additional barrier around the compound’s perimeter.” Republican Rep. Jason Chaffetz, who serves on the House Homeland Security Committee, tweeted, “Been investigating the Secret Service for some time. Frustrating. Good men and women but HUGE question marks for their leadership. This is not the first time Secret Service has shown too much vulnerability. There are other unreported incidents. I will continue to push.”

Lois Lerner breaks silence: The woman at the center of the IRS Tea Party targeting scandal, Lois Lerner, spoke for the first time to Politico in a two-hour session. The story’s lead: “Employers won’t hire her. She’s been berated with epithets like ‘dirty Jew.’ Federal agents have guarded her house because of death threats. And she’s spent hundreds of thousands of dollars defending herself against accusations that she orchestrated a cover up in a scandal that has come to represent everything Americans hate about the IRS. Lois Lerner is toxic — and she knows it. But she refuses to recede into anonymity or beg for forgiveness for her role in the IRS tea party-targeting scandal. ‘I didn’t do anything wrong,’ Lerner said….”

Daily Presidential Trivia: On this day in 1961, President John F. Kennedy signed a congressional act that established the Peace Corps. Which member of Congress originally proposed a bill to establish the Peace Corps in 1957? Be the first to tweet us the correct answer using #PoliticsTrivia and you’ll get a Morning Line shout-out. Congratulations to Yvonne Gibney (@Lillyvonne228) for guessing Friday’s trivia: where and by whom was Garfield assassinated? The answer was: In Washington, D.C. by Charles J. Guiteau.

The history of the United Nations in photos: http://t.co/fvgOMsJywV pic.twitter.com/MvpULN1cQR

Jetpacks and submarines, this is how to shop like James Bond: http://t.co/kWe0INn27b pic.twitter.com/0MmPjK6R7m

Left: Outside spending has surpassed the mark for the most money ever spent in a midterm election. Image by Getty Images