Outside spending on record-breaking pace 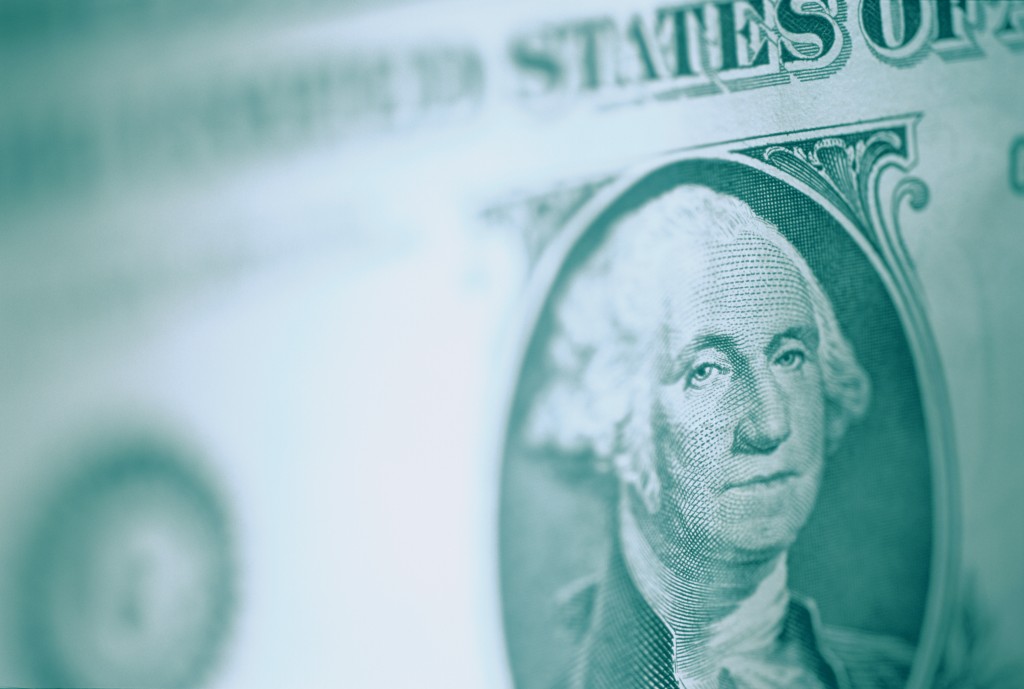 Money talks: Federal campaign finance reports were (in theory) due at midnight for the first quarter of 2014, and we’re going to be looking at a few different angles on money in this election. First, what’s available comprehensively is outside spending (because it’s updated more regularly). So far, outside groups have spent $56 million, outpacing every other midterm election to this point and more than doubling 2010 spending (which was $23 million at this point), the previous record year for midterms, according to the Center for Responsive Politics. In fact, outside spending has already outpaced every PRESIDENTIAL election except 2012. At this point in 2008, for example, $32 million was spent by outside groups. But that was a pre-Citizens United world. Campaign money watchers expect that outside spending could top $500 million this cycle. That’s half-a-billion dollars. All this indicates what will be an explosion of outside money in the 2016 presidential, especially following the Supreme Court’s McCutcheon ruling. 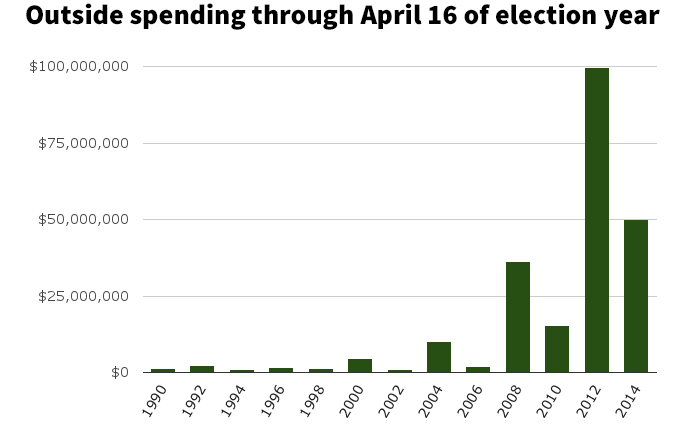 North Carolina also dominates on ad spending so far. Per Republican ad-tracking firm SMG Delta, here are the numbers. Note that the only state where pro-Democratic groups are outspending Republican ones is Louisiana, where Democrat Mary Landrieu is not going to go down without a fight:

Maxed out: In McCutcheon, the Supreme Court ruled that big donors can no longer max out in a cycle. They still have limits on how much they can give to any one candidate, but they can now give to as many candidates as they want. Previously, there was an aggregate limit of $123,200 for any one donor to campaigns, PACs, and political parties. But here are a couple of fascinating statistics:

One name that popped out to us who maxed out in both cycles — Ronald Gidwitz, who happened to be the all-time spender on a gubernatorial bid in Illinois (2006) before Bruce Rauner, this year’s GOP nominee, outdid him. Gidwitz, by the way, has endorsed Rauner. About $75 million or so is expected to be spent on that governor’s race this year, to be topped only by the Florida governor’s race.

Is it still ¡Obama!? After President Barack Obama’s meeting Tuesday at the White House with faith leaders, one of those in the room, the Rev. Luis Cortes, took to the microphones and declared that the president said “he would not be doing anything to change the law as it currently exists” through executive action, PBS NewsHour’s Elizabeth Summers reports. The White House, however, says, in fact, President Obama has NOT ruled out executive action on immigration, but the “focus” of the meeting was on moving legislation through the House. AP framed it this way: Mr. Obama “has no plans to make unilateral changes to the nation’s immigration laws while there’s still a window for Congress to pass legislation.” But that window appears boarded up. Immigration reform, of course, passed the Democratic-controlled Senate last June with Obama’s backing, but it was dead on arrival in the GOP-controlled House. Speaker John Boehner, who entertained the idea of a piecemeal approach, declared earlier this year that nothing could get through because his conference didn’t “trust” the president. There’s no indication that there will be any movement on this before the 2014 midterm elections. It’s been a month since the Department of Homeland Security began its review of the administration’s deportation policy. And advocates have been irritated by the president’s unwillingness to take more decisive action, especially for a group that was so key to his re-election and future Democratic prospects.

Little support for strong intervention in Ukraine: As the West weighs its (not very good) options on the situation in Ukraine, a McClatchy-Marist poll gives fresh evidence to why it is so difficult for President Obama to even try and sell the American people on any kind of intervention. A majority (55 percent) say Ukraine is key to U.S. interests, but half (50 percent) don’t think the U.S. should “draw a hard line against Russia.” But maybe the most intriguing number in the poll: Americans are split on whether to do anything at all — 46 percent favor diplomacy and economic sanctions, while 43 percent say do nothing. That’s despite two-thirds (66 percent) thinking Russia won’t stop at Crimea and almost half (46 percent) saying another Cold War is likely. Mr. Obama gets a 45 to 45 percent approval on his handling of Ukraine and a 45 to 52 percent overall job approval.

Blasts from the past – so you want to run for office?: Sen. Rand Paul, R-Ky., is facing criticism from the right after Mother Jones unearthed a 2009 video in which he says former Vice President Dick Cheney pushed for the war in Iraq so Halliburton would benefit. Wall Street Journal columnist Bret Stephens and National Review’s Rich Lowry blasted Paul. “His instincts sometimes seem more appropriate to a dorm-room bull session than the Situation Room,” Lowry writes. Paul pens an op-ed in the Washington Post Wednesday: “Nuance has been a bit lacking in our foreign policy of late.”… Speaking of unearthed past comments, Buzzfeed’s Andrew Kacynski reports that Mississippi Sen. Thad Cochran’s tea party challenger, State Sen. Chris McDaniel, “wrote blog posts [in the mid-2000s] criticizing poor people affected by Hurricane Katrina and mocking a Muslim man’s name,” and alleged that the Supreme Court tried to “de-Christianize” America in its 1955 ruling on the 14th Amendment. McDaniel was also in hot water last week, after the Wall Street Journal revealed clips from McDaniel’s former radio show. On top of this, Cochran has raised three times as much as McDaniel, and is up double-digits in the polls..

Daily Presidential Trivia:
On this day in 1862, President Lincoln signed the District of Columbia Compensated Emancipation Act, which ended slavery in the nation’s capital. How many senators originally voted against the legislation? Be the first to Tweet us the correct answer @NewsHour, @rachelwellford, @DomenicoPBS, and you’ll get a Morning Line shout-out. Congratulations to Ty Matsdorf (@tymatsdorf) for getting yesterday’s answer – the Secret Service. Go Grizz! Also a hat tip to Ben Goodman (@BenGoodman) for a very close second place.

Quote of the day:
“I am telling you if there is a God, when I get to heaven I’m not stopping to be interviewed. I am heading straight in. I have earned my place in heaven. It’s not even close.” — the always-humble former New York Mayor Michael Bloomberg, citing his policy pushes in a New York Times story detailing his $50 million pledge to take on the NRA this year. The New Yorker once took aim at Bloomberg’s view of himself. One St. Peter interview question: What else could be done with $268 million other than getting yourself elected mayor three times?

Officials look on as the flag is raised at the #BostonMarathon finish line. #7News #BostonRemembers pic.twitter.com/UJQ556Uqs0