Poll: Ahead of debate, Warren leads in favorability among Democratic voters

More Democrats and left-leaning independents had a favorable impression of Sen. Elizabeth Warren than others in the Democratic field, including frontrunner Joe Biden, ahead of Thursday’s debate, according to the latest PBS NewsHour, NPR and Marist poll.

And while the poll showed Democrats still have questions about the candidates, one thing is clear: they want someone who can beat President Donald Trump.

When asked to pick between a Democratic nominee who represented their values, or one who had the best chance of beating Trump, 58 percent of Democrats and left-leaning independents said they wanted someone who can win in 2020. That sentiment has risen significantly since June when 46 percent of Democratic voters said they preferred someone who could win. 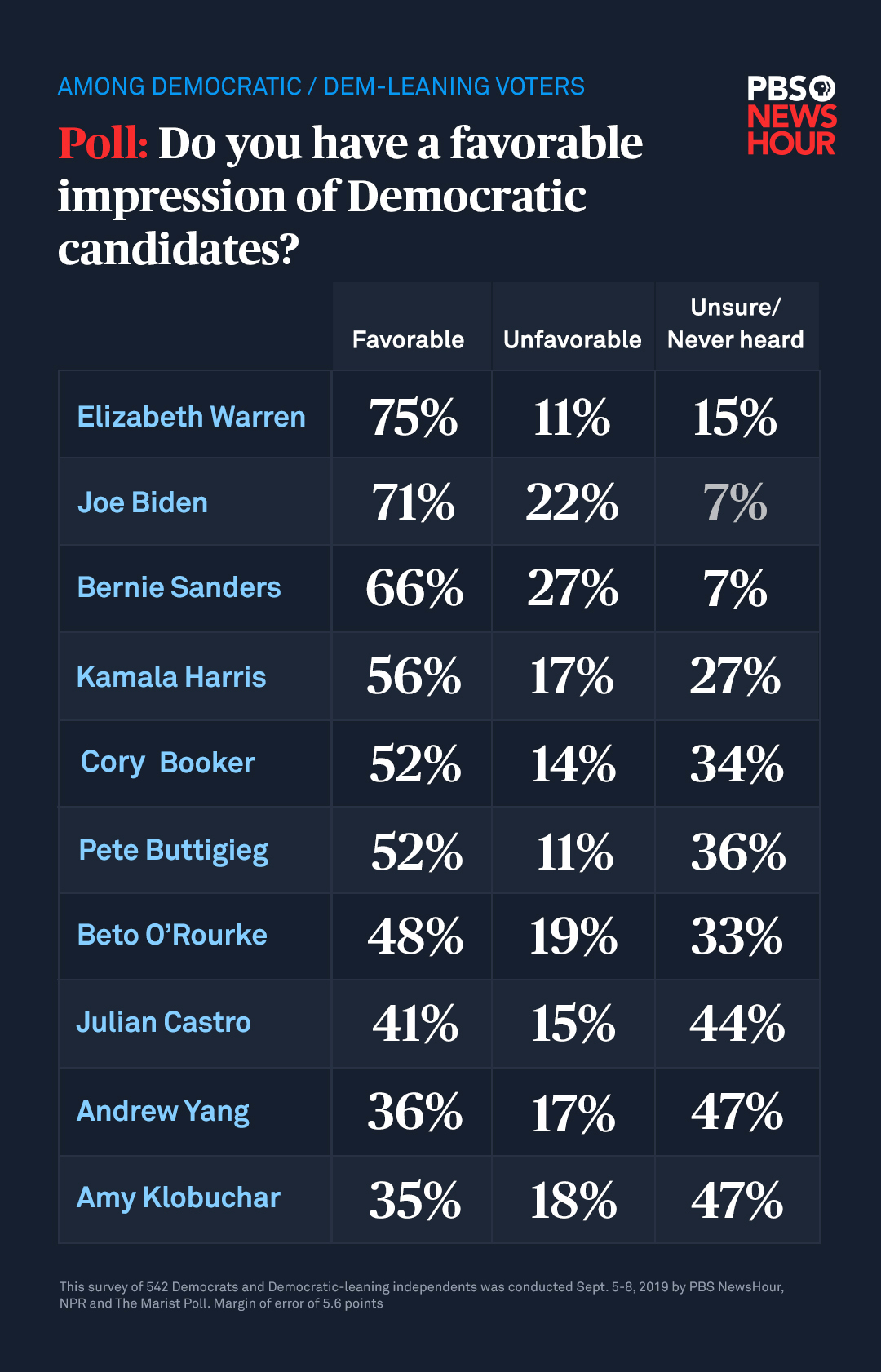 And while defeating Trump is a top priority among Democrats, progressive strategist Antjuan Seawright says a candidate with that ability also would hold implicit strengths as a result.

“If you can beat Trump, that means people believe you can unite all corners of the party, but you also give off and motivate a message or give voters something to turn out for,” he said. “That’s been a challenge in elections in the past.”

A little more than half of Democrats — 55 percent — said they plan to tune in to tomorrow night’s televised debate, while 36 percent said they would track post-debate news.

With several candidates running for president, Democrats fear “an internal bloodbath,” said Lee Miringoff, who directs the Marist Institute for Public Opinion. With a long race to the White House that likely includes confronting Trump, Miringoff said “going after fellow Democrats and damaging them may not be the best route to go.”

It is still early in the 2020 presidential election, and although the Democratic race to the White House is heating up, voters have a long time to make up their minds.

As election day draws closer, Trump’s stagnant approval ratings suggest he has maintained his base and little else with 41 percent of Americans saying they think he has performed well as president — a number that has moved marginally since he took office, according to Marist polling data.

On favorability, Warren, D-Mass., led the pack with 75 percent of likely Democrat and Democratic-leaning independent voters saying they had a favorable impression of her. Former Vice President Joe Biden trailed close behind her with 71 percent favorability, followed by Sen. Bernie Sanders, I-Vt., with 66 percent. Sen. Kamala Harris, D-Calif., had 56 percent favorability, while Sen. Cory Booker, D-N.J., and Mayor Pete Buttegieg, both had 52 percent.

“If you can beat Trump, that means people believe you can unite all corners of the party.”

For lower polling candidates, even those who will be in the debate on Thursday, name recognition remains a tough challenge. While Democrats and left-leaning independents had favorable opinions of former U.S. Rep. Beto O’Rourke, D-Texas, and former Obama housing secretary Julián Castro a full 47 percent were unsure about or had never heard of either philanthropist Andrew Yang and Sen. Amy Klobuchar, D-Minn.

But one thing is for sure: Voters are paying attention. While only 38 percent of U.S. adults said they would listen to what the Democratic candidates have to say at the debate, another 42 percent said they would closely follow news coverage. Eighteen percent of Americans said they have no desire to pay attention to any of it.

Left: While the poll showed Democrats still have questions about the candidates, one thing is clear: they want someone who can beat President Donald Trump.